Yesterday, the Central Bank of Sri Lanka (CBSL) surprised with a 50bps rate hike, hiking the standing lending facility from 5.5% to 6%, the standing deposit facility from 4.5% to 5%, and the statutory reserve ratio from 2% to 4%. All the three economists surveyed by Bloomberg had expected no change.

As justification, the CBSL said in its statement that "These decisions were made with a view to addressing the imbalances on the external sector of the economy and to preempt the buildup of any excessive inflationary pressures over the medium term, amidst improved growth prospects."

After rising to 5.7% yoy in July, the CBSL expects inflation to hover around the upper-end of its 4-6% target range in the near term. And after recording higher-than-expected growth of 4.3% yoy in Q1, the CBSL now expects real growth to reach 5% this year (above the IMF’s 4% projection). 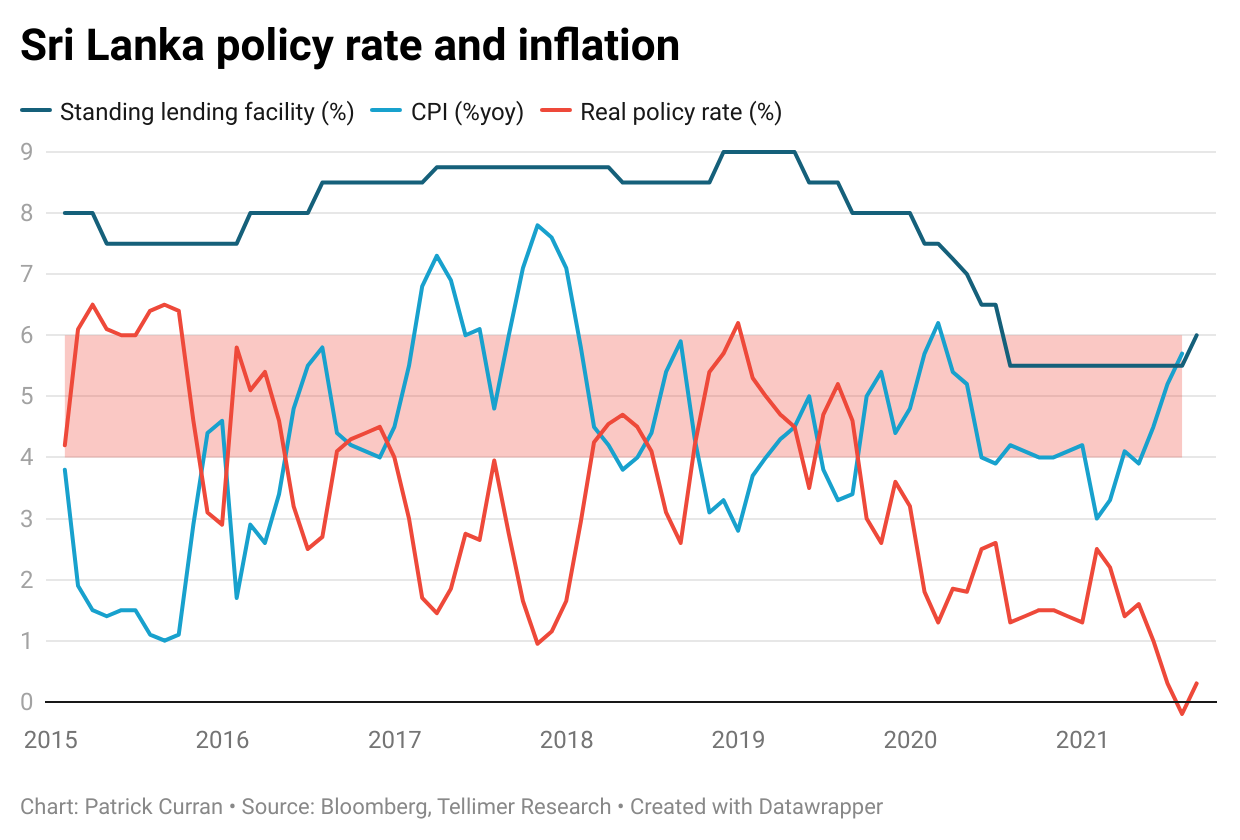 Loose monetary and fiscal policy has been a key driver of the rebound, alongside easing Covid restrictions. However, the negative fallout of these policies is becoming increasingly clear, with rapid credit growth exacerbating external imbalances (private sector credit has surged from 6.5% yoy at the end of 2020 to 12.9% in June) and Covid cases surging (with the 7-day moving average of new cases nearing a record 4,000 and the WHO Sri Lanka recently warning of an impending health crisis).

Indeed, the trade balance has widened by US$1bn in H1 relative to the same period last year, with imports growth of 31% yoy (cUS$2.3bn; +44% fuel, +28% non-fuel), despite ongoing import restrictions, more than offsetting a 29% (cUS$1.3bn) rise in exports. While remittances continued to grow by a robust 12% yoy in H1, there is evidence of deceleration with a 16% yoy contraction in June, and the all-important tourism sector is not expected to make a meaningful recovery this year.

The ongoing BOP deterioration has pushed reserves to alarming levels, falling from US$4bn to US$2.8bn in July (just 1.8 months of import, and compared to US$5.4bn of public and private external principal payments over the next 12 months) amid a US$1bn eurobond repayment. This is a bigger drop than anticipated, as the CBSL had said that it expected the domestically-held portion of the eurobond to flow back into the country (estimated at US$300mn), and hints at a continued BOP deficit in July even once the amortisation is factored out. 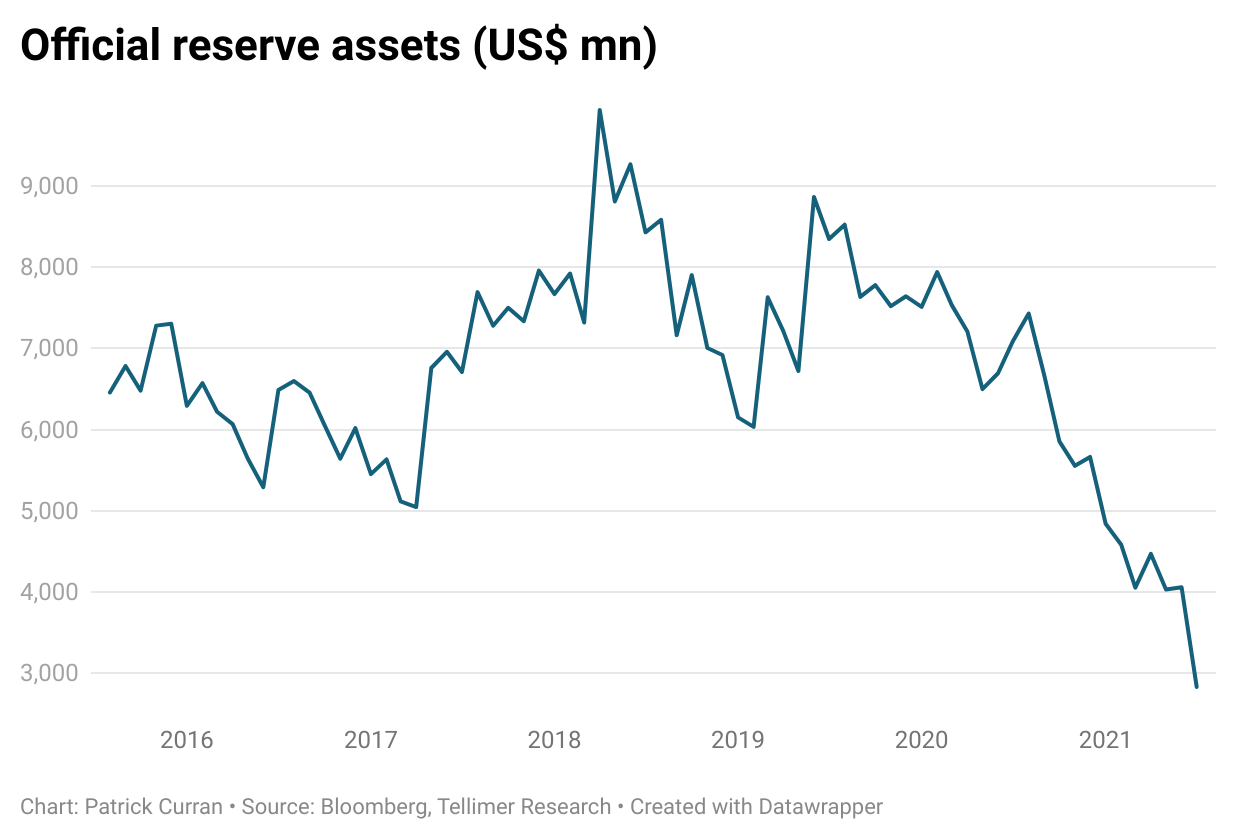 The CBSL was quick to emphasise that reserves do not include the US$1.5bn swap from the PBoC, but it is unclear how much of this will actually materialise. The CBSL also announced that it is expecting to receive US$50mn this week from its swap with Bangladesh, with the remaining US$200mn to be disbursed over the next 10 business days, but with a three-month maturity on the swap line (with the potential to extend to six months for a 50bps premium) this represents no more than a temporary band-aid.

That said, reserves should still receive a boost this month from the IMF's US$787mn SDR allocation, and the CBSL still expects a US$400mn swap with India under the SAARC finance facility to materialise this month too. Sri Lanka also entered into a US$300mn term loan facility with the CDB to support its Covid response. But with the exception of the CDB loan and SDR allocation, durable (non-swap) financing flows are still lacking, and FDI ticked up only marginally from US$190mn to US$200mn in H1 this year.

The CBSL highlighted that "Limited conversion by exporters and the advancing of imports together with some speculative activity, prompted by anomalies between interest rates on the rupee and foreign currency products in the financial market, exerted undue pressure on the exchange rate in the domestic market." While the CBSL has continued to peg the LKR at an overvalued rate of 203/US$, evidence of exchange rate pressures is increasingly apparent.

Despite the CBSL's moral suasion, reports emerged this week that domestic banks have started to sell dollars to importers at a rate of around 211/US$, with foreign banks selling around 215/US$. The CBSL released a statement denying that licensed banks have been asked to devalue the LKR, saying that "The public is also advised not to rely on false and misleading information."

Meanwhile, the LKR continued to trade at around 225-230/US$ on the parallel market, with opposition MP Harsha de Silva saying that Sri Lanka is facing its worst economic crisis since independence and that there are no dollars available anywhere at the rates specified by the central bank. He claims that the dollar is being sold in the parallel market for around 235-240/US$, and sometimes even higher.

Against this backdrop, monetary tightening is increasingly necessary to tame excess liquidity in the system that is contributing to pressures on the BOP, alongside a devaluation of the LKR to restore balance. But while yesterday's rate hike at first glance is a step in the right direction, it falls well short of what is required.

The CBSL has continued to cap rates at the government's T-bill auctions, and though the policy rate was hiked 50bps yesterday to 6%, the CBSL only allowed the interest rate ceiling to rise 5bps to 5.38%. Governor Lakshman confirmed that the CBSL will continue to announce ceilings on T-bill auctions for "some time", potentially limiting the actual tightening that results from yesterday's decision.

The ceiling has also led to financing pressures, with the government accepting less than half of the bids received over the last 3 months of T-bill auctions, leading to a subscription rate of less than 73% (and just 45% at the 18 August auction). Funding shortfalls, in turn, force the CBSL to continue to monetise the budget deficit, adding further pressure to inflation, the BOP and the exchange rate (monetisation reached LKR310bn in H1, or 1.9% of projected full-year GDP, on track to exceed last year’s figure of LKR506bn, or 3.4% of GDP). 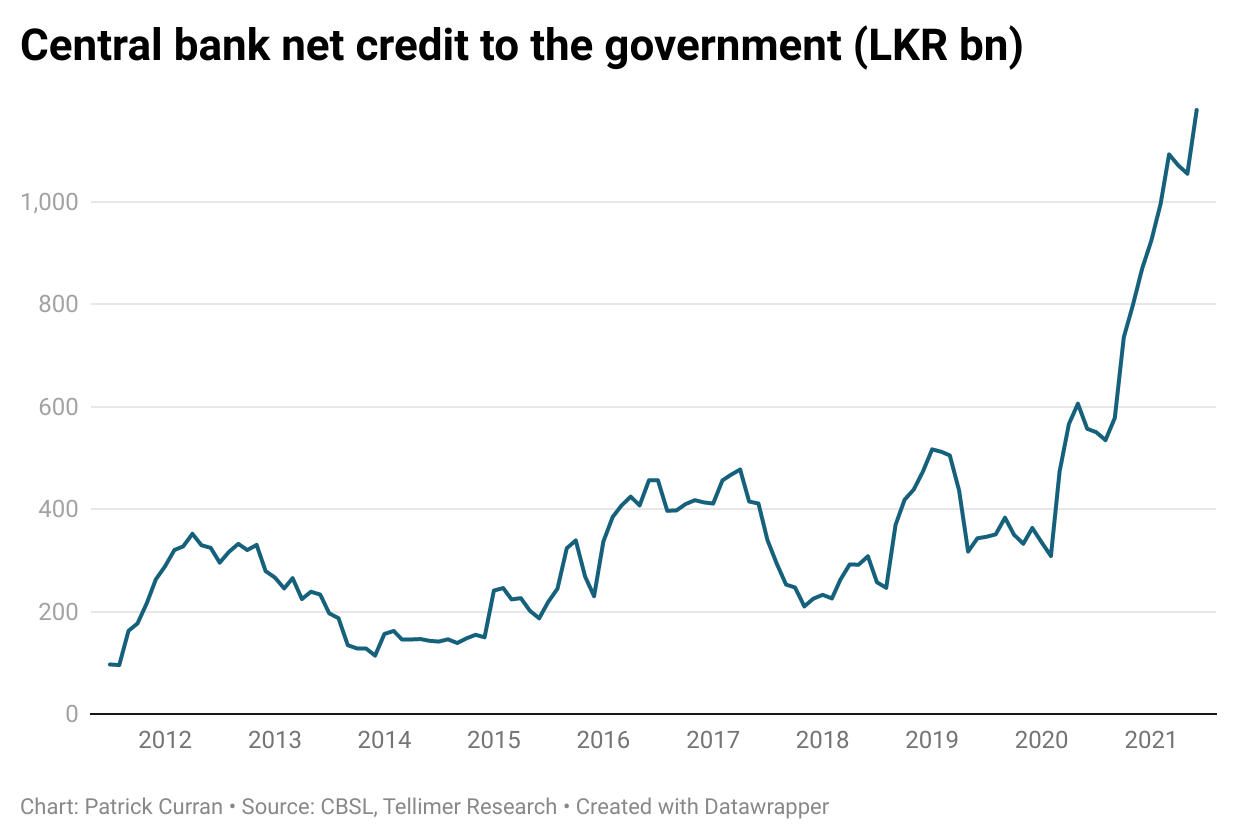 Of course, a monetary tightening must also be accompanied by fiscal consolidation. However, with the mid-year budget report pointing to further slippage and no updates to budget data beyond April, it does not appear that this is likely to materialise. And while recently appointed Finance Minister Basil Rajapaksa said recently that he would have to "take certain unpopular decisions, just like how a father would for the betterment of his children and family," there is little to suggest that he is willing to make the tough decisions needed to stabilise the budget.

To the contrary, he is in the process of authorising what effectively amounts to a subsidised lending programme from the CBSL that will allow any of over 270 financially struggling SOEs to borrow funds at a 4% interest rate, and has continued to cite import restrictions as the government's main tool to reduce BOP pressures rather than fiscal and monetary tightening and LKR devaluation. As such, while yesterday’s MPC decision is marginally positive, we do not think it is enough to materially improve Sri Lanka’s imbalances.

We downgraded Sri Lanka 6.85% 2024s (and all other eurobonds aside from the January 2022 maturity) from Hold to Sell on 15 July at a mid-price of US$67.25 due to worsening external and fiscal imbalances and continued resistance to an IMF programme. The 24s have rebounded by 4.25% to US$64.4 at the time of writing today in response to the policy rate hike and financing announcements, but are still down 4.25% since we downgraded to Sell. We retain our Sell recommendation, and will consider revisiting if it falls below our target price of US$60. 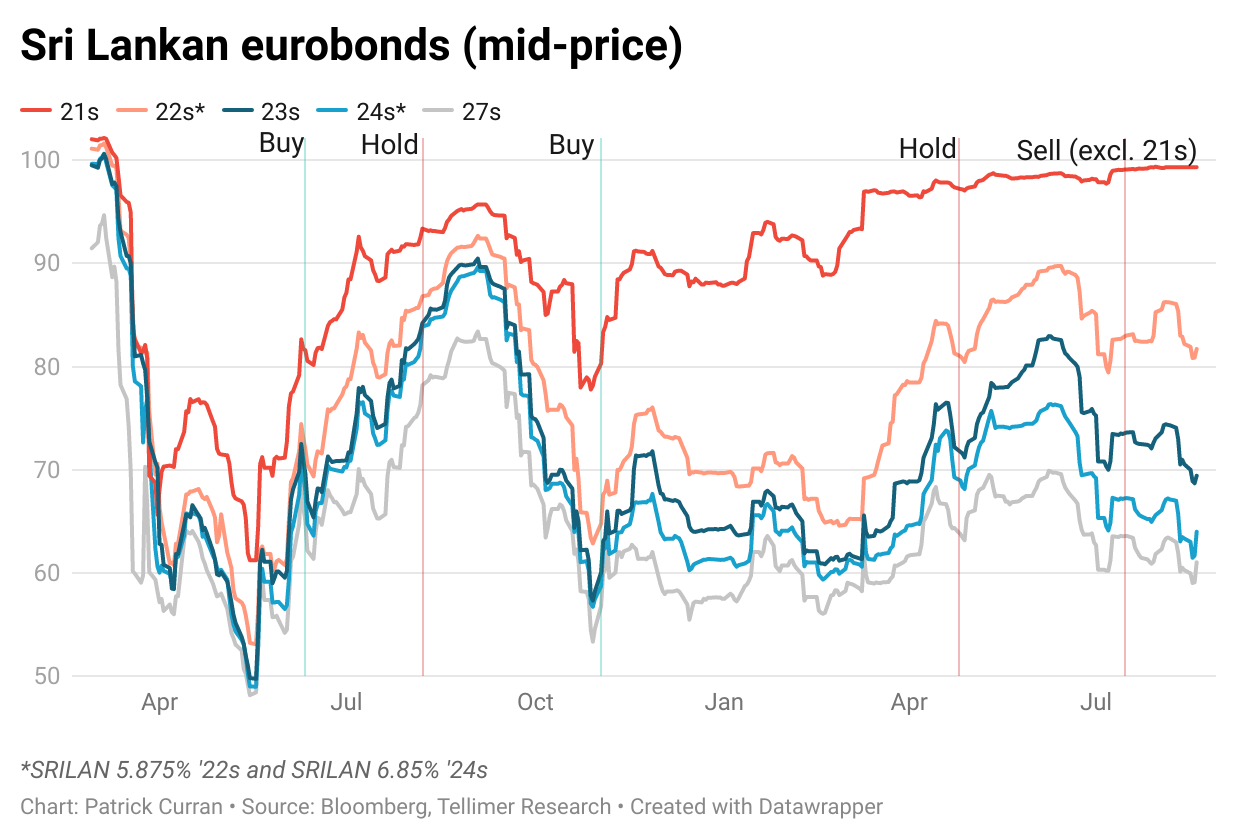