Sri Lanka: Still cheap, still many political steps to get it sprinting instead of limping

The Sri Lanka Presidential election is on 16 November and the window for registering as a candidate passed today (6 October). Unsurprisingly, neither the incumbent President Sirisena, nor the incumbent Prime Minister, Wickremasinghe, are contesting.

Bullish investors hope that the results of the Presidential election, and the Parliamentary election which might follow soon after, result in a clear Parliamentary majority which enables the implementation of the relatively straightforward policies needed for this 20mn population economy to more fully realise its potential: fiscal austerity to rebuild confidence in government debt and the FX rate, better security to rebuild the tourism sector and foreign direct investment to driven an upgrade of tourist and transport infrastructure. The first part of this scenario is a Presidential election victory for Gotabaya Rajapaksa.

We agree with the logic behind this hope. The PM Wickremasinge-led government of the past five years has been hamstrung by the lack of a Parliamentary majority, with merely 47% in the core coalition where his own party is merely one member, and this has tempered our enthusiasm for Sri Lanka's deep value. But there is considerable uncertainty associated with the chain of political events baked into this hope.

Nevertheless, the key point is that with valuations so low, any step towards a government with a stronger political mandate is likely to be greeted favourably. That creates a potentially attractive risk-reward on an absolute basis (although we continue to see more merit in almost every other Asian market we cover, e.g. we prefer the cheap, reform story of Pakistan to that of Sri Lanka).

Political chain of events needed to spark an upward investment re-rating; uncertainty at each step

(1) Gotabaya Rajapaksa's candidacy – The main opposition candidate, Gotabaya Rajapaksa (brother of former President, Mahinda Rajapaksa) appears clear of the legal challenge to his citizenship (and, therefore, ability to submit his candidacy), following a favourable Appeal Court ruling on 4 October. We understand that he still faces a case in which he is accused of misappropriating state funds (which is due to start on 15 October and may not complete until just before the Presidential election). In the event that Gotabaya is prevented from running, another Rajapaksa sibling, Chamal, has paid the deposit required to register as a candidate.

(2) Presidential election – Gotabaya is viewed by many as the favourite because of the: (i) failure of the incumbent government to either sufficiently distance itself from the previous Mahinda Rajapksa-led government (in terms of anti-corruption, political devolution or civil war era human rights grievances), maintain internal unity (divisions have been publicly aired between President Sirisena and PM Wickremasinghe as well as, more recently, between PM Wickremasinghe and the Presidential candidate from his own party, Sajith Premadasa) or to match the economic growth achieved under that Rajapaksa government; (ii) the success of the Rajapaksas in keeping their political network well-funded and well organised (evidenced by the formation of their new political party, the SLPP which swept the local elections in early 2018); and (iii) the Easter terror attack which may have made voters more responsive to the security credentials of Gotabaya (who organised the civil war efforts as Defence Minister). Whether this is sufficient to overcome the damage done to the Rajapaksas in the ultimately failed attempt to test Parliament's confidence in PM Wickremasinghe in late 2018 remains to be seen.

(4) Parliamentary coalition – At the depths of the incumbent government's unpopularity, the new Rajapaksa-led party, the SLPP, won c40% of the popular vote in the February 2018 local election. In other words, even if the SLPP were to replicate this feat and capture 40% of Parliamentary seats in the next election (whenever that is), then it would still have to establish a stable and coherent coalition with other parties. In turn, this would likely require working with MPs in the SLFP loyal to the current President Sirisena (who is not standing for re-election and is effectively supporting Gotabaya's candidacy). Relations between the Rajapaksas and Sirisena have been inconsistent and there is little to suggest the relationship will be stable in future: (i) Sirisena defected from the coalition led by Mahinda Rajapaksa prior to successfully defeating Mahinda in the January 2015 Presidential election; (ii) Mahinda led the breakaway from the SLFP when establishing his new SLPP before the February 2018 local elections; (iii) Sirisena and Mahinda appeared to reconcile when Sirisena attempted to replace PM Wickremasinghe with Mahinda in late 2018, but this renewed partnership soured when both seemed to suffer from the ensuing constitutional crisis; (iv) even on the eve of Sirisena pledging support for Gotabaya, there were negotiations over whether Gotabaya would campaign under the banner of Sirisena's party or his own.

An investment case that attracts more attention that it should

In one sense, Sri Lanka does not merit the attention it is given by foreign institutional equity investors: the market trades less than US$4m per day, its largest stock (conglomerate JKH) trades less than US$1m per day and (even after Kuwait's upgrade) it is likely to account for merely 2-3% of (the increasingly infrequently followed) MSCI FM index.

Perhaps good corporate disclosure, English language fluency, longevity of EM asset manager experience (dating back to the avalanche of inflows after the end of the civil war in 2009), visa on arrival for many and a truly "resplendent island" for tourism have a lot to do with this behavioural quirk among institutional investors.

But, in another sense, there is a lot going for the fundamental, long-term investment case. Sri Lanka is well located (half-way between Singapore and Suez, providing the main deep-water port for the eastern seaboard of India) and has a relatively educated and healthy base of human capital (scored by the World Bank close to Romania, which has a similar-sized population but with almost 4x the cost of labour).

It should offer one of the most attractive growth stories among the smaller population (roughly 10m to 30m) global emerging and frontier markets (i.e. compared to a peer group of commodity exporters – Chile, Ghana, Kazakhstan, Peru – and the commodity importers of Jordan, Romania, Tunisia). Among this peer group, Sri Lanka is the cheapest equity market relative to history (i.e. its trailing price/book is at a 40% discount to the 5-year median compared to a range of a 6% discount to a 61% premium for these peers).

Equities – Sri Lanka equities, measured by the local CSEALL index, are down 2% ytd in total US$ return terms, compared to MSCI FM up 10%. Trailing price/book is 1.0x (for 9% trailing ROE, so low partly because of the excess net cash retained by some of the largest index constituents), a nearly 40% discount to the 5-year median (compared to parity for MSCI FM). Forward 2020f price/earnings is 7.2x (for consensus aggregate earnings growth of 15%), compared to 9.1x for MSCI FM (for earnings growth of 13%).

Currency – The FX rate is broadly flat ytd, following the 16% devaluation in 2018. On a real effective exchange rate basis, the FX rate is within 10% of fair value (7% downside), current account balance is improving to 2.6% of GDP (versus 3.2% in 2018, as more competitively priced exports have offset the drop in post-Easter terror attack tourism) but FX reserves import coverage is merely a little over four months. Therefore, Sri Lanka remains vulnerable in the event of any adverse change in global risk appetite, oil prices or relations with the IMF (the current extended fund facility runs to June 2020).

Current lack of a Parliamentary majority 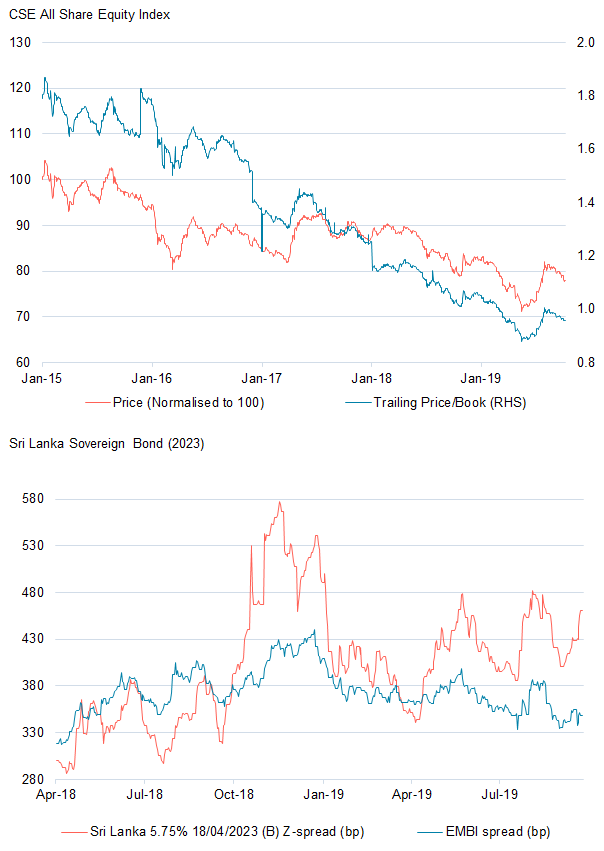 Stock screen for liquidity, performance and valuation highlights cheap value across the board 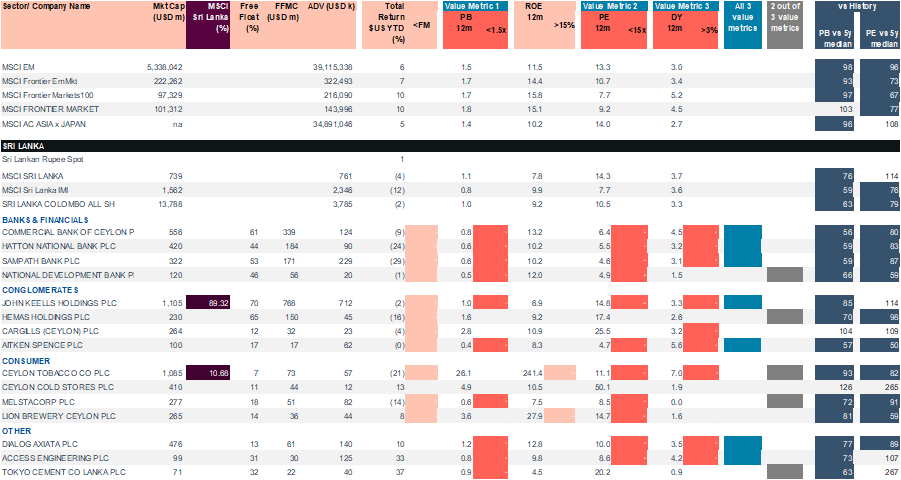 Sri Lanka: Setback for Rajapaksa means a step back to paralysis, 14 November 2018

Sri Lanka: Cheap, but political risk drives our caution, 18 May 2017