The market seems confident that the US$500mn eurobond will be paid when it matures on 18 January, with the government assuring investors that the necessary funds have already been allocated and bond prices on the SRILAN 5 ¾ 01/18/2022s rising from below US$90 to above US$96 over the past two weeks in response.

Sri Lanka’s reserves increased from US$1.6bn to US$3.1bn in December as the government was finally able to draw on the US$1.5bn swap from China that they had long touted, temporarily helping to lift reserves from alarmingly low levels in November and giving Sri Lanka the space to make its January eurobond payment. That said, the terms of the swap line are still not clear, and it is likely tied to payments to Chinese exporters and creditors (with nearly US$1bn of Chinese debt service due in 2022). 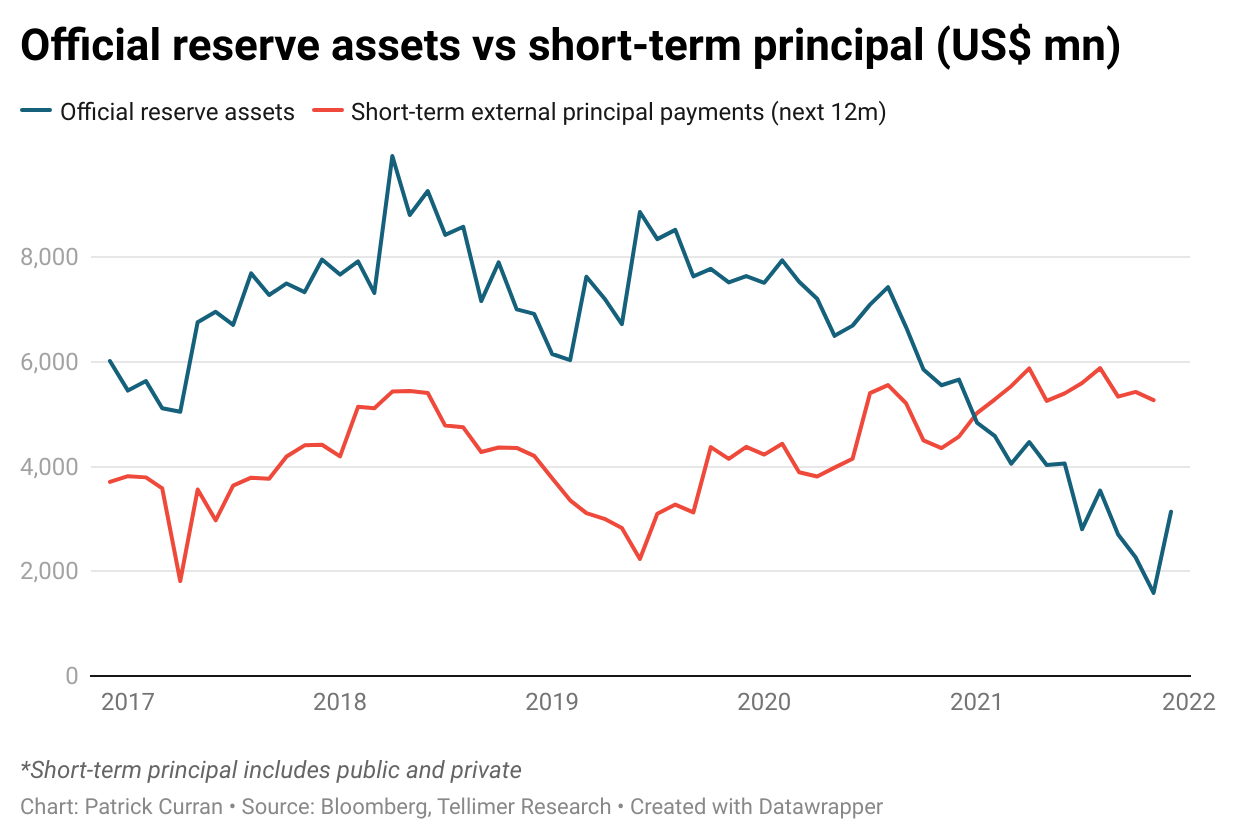 Central bank (CBSL) Governor Cabraal said efforts to secure funding for the US$1bn maturity on 25 July are also at an “advanced stage”, including a US$1bn trade credit from India and “a possibility of a new loan from China…to cushion our debt repayments to China itself.” However, Chinese Foreign Ministry spokesman Wang Wenbin said he was not aware of the situation, and Sri Lanka has consistently overstated its funding pipeline, so optimism over future financing should be taken with a heap of salt.

Governor Cabraal has also seemingly ruled out an IMF programme this week, saying that "The IMF is not a magic wand… the other alternatives are better than going to the IMF." This affirms our view that the government will try to muddle through with ad hoc bilateral funding rather than committing to an IMF-backed reform programme, which will only kick the can down the road absent a major policy shift and stickier financing pipeline.

It will also increase Sri Lanka’s reliance on China and India to meet its obligations, potentially complicating restructuring talks if/when Sri Lanka finally defaults. President Rajapaksa has already asked China to restructure its debt payments (with cUS$3.4bn of public external debt owed to Chinese creditors in April 2021, or nearly 10% of the total stock) and provide “concessional” terms for its exports to Sri Lanka (cUS$3.5bn last year).

Against this backdrop, we still think default is inevitable. The rating agencies seem to agree, with all three major agencies downgrading Sri Lanka since October (including S&P to CCC from CCC+ this week with a negative outlook, prompting a CBSL statement that the agencies are undermining their efforts to build FX reserves). Further, each payment Sri Lanka makes to its creditors without a corresponding policy adjustment (preferably one that is IMF-backed) should dilute the value of its longer-dated eurobonds.

Sadly, a major policy shift still seems unlikely. Rather than turning off the printing presses and allowing the currency to adjust, the government has approved a new LKR227bn (US$1.1bn, 1.3% of GDP) relief package including additional cash grants to citizens receiving income support, increased agricultural subsidies to offset the impact of the government’s fertilizer ban, a LKR5,000 monthly allowance to 1.5 million government employees, and the removal of certain taxes on food and medicine.

While the government claims this will be funded by a reallocation within the existing budget framework rather than new spending or taxes, it will add pressure to Sri Lanka’s already unrealistic 8.8% of GDP budget deficit target in 2022. Further, after slowing briefly on the back of the removal of yield caps at Treasury auctions, monetisation of the deficit has continued, reaching LKR1,125bn 6.9% of GDP) in the year through November. 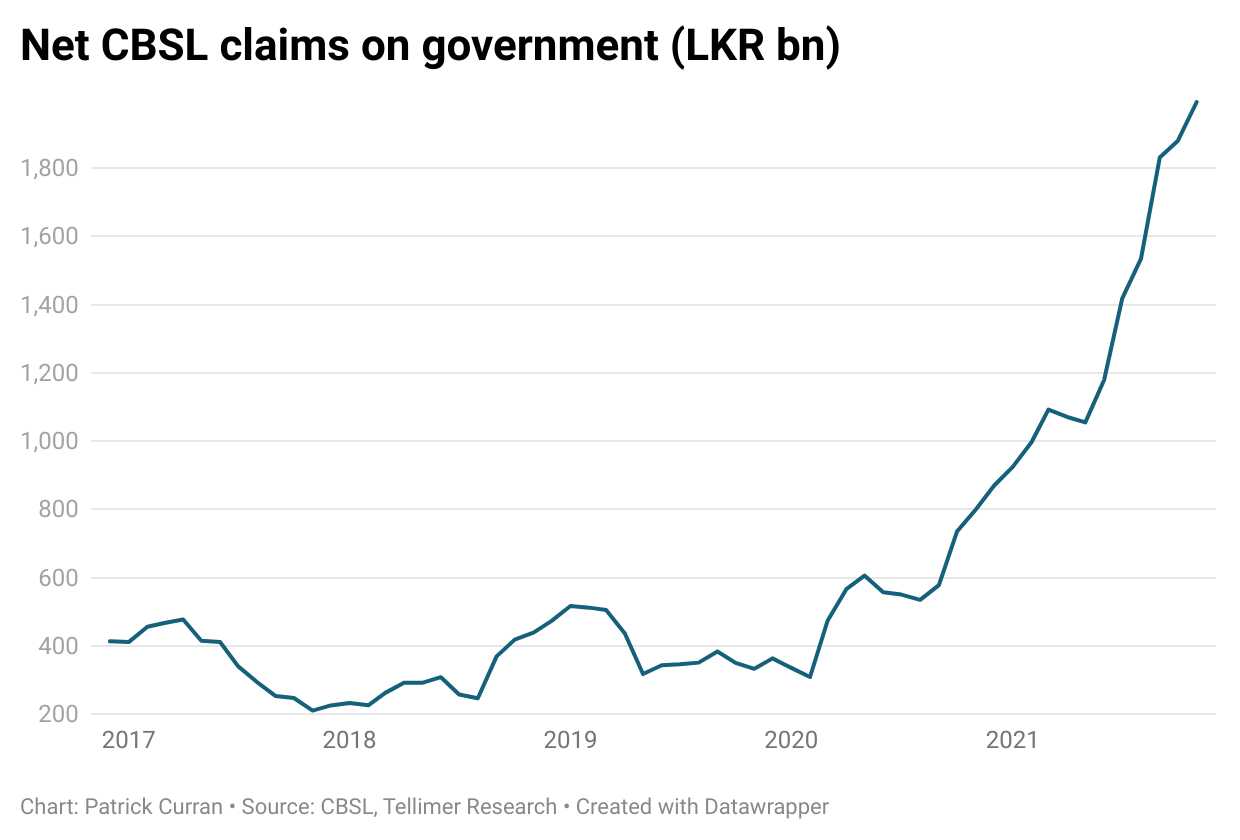 This will continue to put pressure on inflation, which rose from 9.9% to 12.1% yoy in December, and on the exchange rate, which is trading at over LKR 250/US$ on the parallel market versus the official peg of c200/US$. In turn, this will undermine the government’s efforts to attract FX inflows, with remittances falling 18% yoy in the year through November as expats shift to unofficial channels and the global Covid surge means that tourism will not return to pre-Covid levels anytime soon. 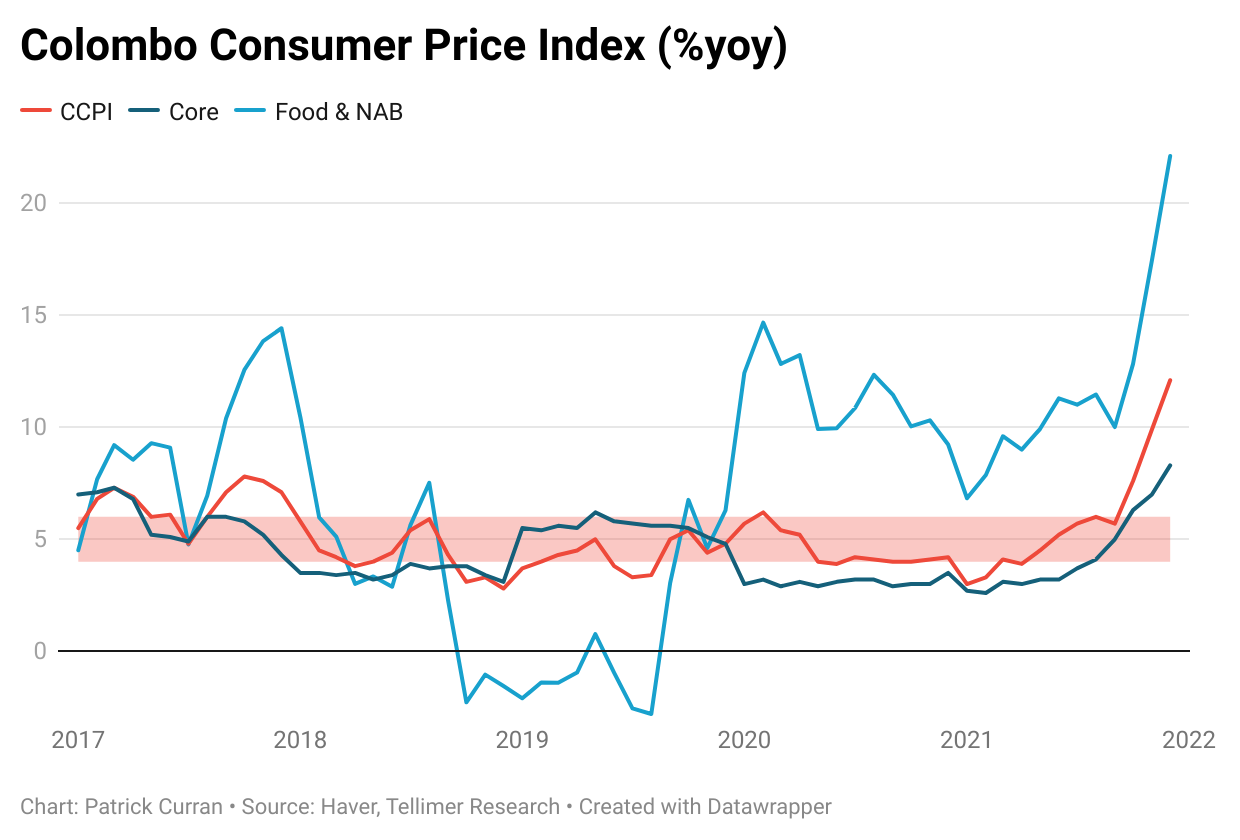 Overall, the economic picture for Sri Lanka remains quite grim and authorities continue to keep their heads in the sand, preferring to paper over the cracks with one-off financing arrangements rather than take responsibility and correct course. Even if the government does attempt to reform, the time for a homegrown programme is long gone given its wasted credibility, and any IMF-backed programme is likely to require a restructuring.

While an updated Article IV could have provided an updated snapshot of the IMF’s views on debt sustainability, it has seemingly been delayed from its year-end target (and the last one was now published over 2 years ago in November 2019), and with no mention of when it will take place. This hints at a potentially difficult discussion between the two sides, as perhaps the authorities’ don’t like what they are being told, preferring instead to muddle through in the hopes that a tourism rebound will bail them out later in the year and allow them to avoid default.

While the money has reportedly been allocated for the 18 January eurobond maturity, with a mid-price above US$96 at cob on Bloomberg on 12 January, there is little upside if they pay and potentially large downside if the government’s promises prove unfounded. As such, we retain our Sell recommendation on the SRILAN 5 ¾ 01/18/2022s.

With the SRILAN 5 ⅞ 07/25/2022s trading just over US$71, we think markets are pricing in slightly less than a 50% chance of default. Sri Lanka’s ability to pay in July relies entirely on its ability to secure financing and/or relief from China and India. While we think the chance of default is >50%, given financing uncertainties we remain agnostic on the SRILAN 5 ⅞ 07/25/2022s.

Beyond 2022, we think default is inevitable. Plans to pay the 2022 eurobonds from reserves should dilute the value of bonds further down the curve by eating up precious FX resources. This has been reflected by the recent improvement in short-term bond prices and deterioration at the longer-end, with the SRILAN 7.55 03/28/2030s falling by c3pts over the past 10 days below US$49. 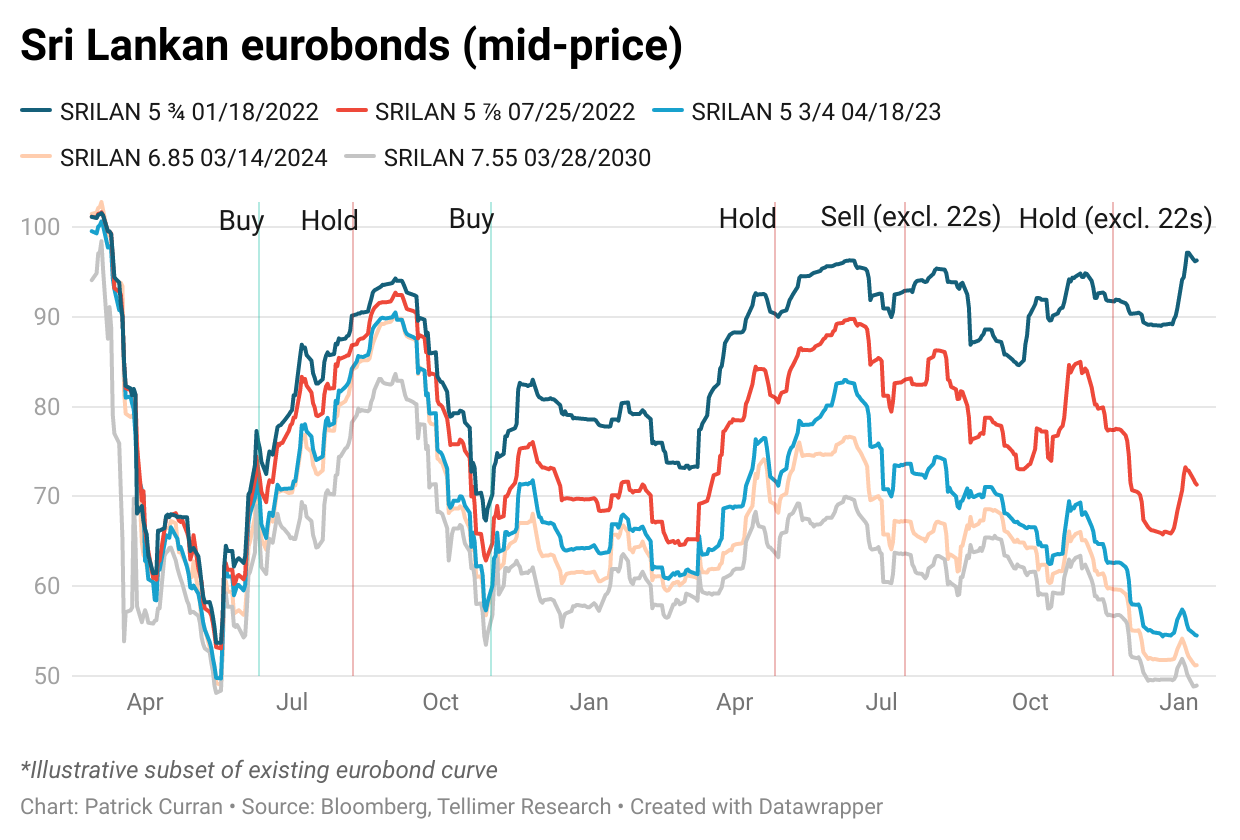 Notwithstanding the recent increase from the US$1.5bn Chinese swap, liquid FX reserves stand at just US$2.8bn versus external principal payments (public and private) of US$5.3bn over the next 12 months and total public external debt service of US$5bn in 2022 (US$3.7bn principal and US$1.3bn interest, per World Bank IDS estimates).

Post-2022 eurobond prices have edged down slightly since we upgraded to Hold on 21 December, and we continue to think they are fairly valued, with limited upside if the government belatedly commits to reforms (which we think is unlikely) and potential downside if it continues to avoid making difficult choices while wasting reserves to delay the inevitable default.

Overall, we think bonds are currently trading in line with recovery value, and if Sri Lanka defaults on the January or July 2022s there could potentially be an interesting opportunity to buy the dip. However, for now, we think post-2022 bonds will continue to trade rangebound, and retain our Hold recommendation on the SRILAN 5 ¾ 01/18/2022s at a mid-price of US$51.2 at cob on 12 January on Bloomberg.