Sri Lanka has been one of the key underperformers since the outbreak of the Russia-Ukraine conflict, with its EMBI spread widening by 377bps from 18 February until cob on 1 March (pushing bonds down by 8.4% in total return terms). This compares to 66bps and 3.9%, respectively, for the EMBI Global index. Bonds have fallen further today, with spreads widening another 27bps at the long end and 197bps at the short end of the curve at the time of writing. 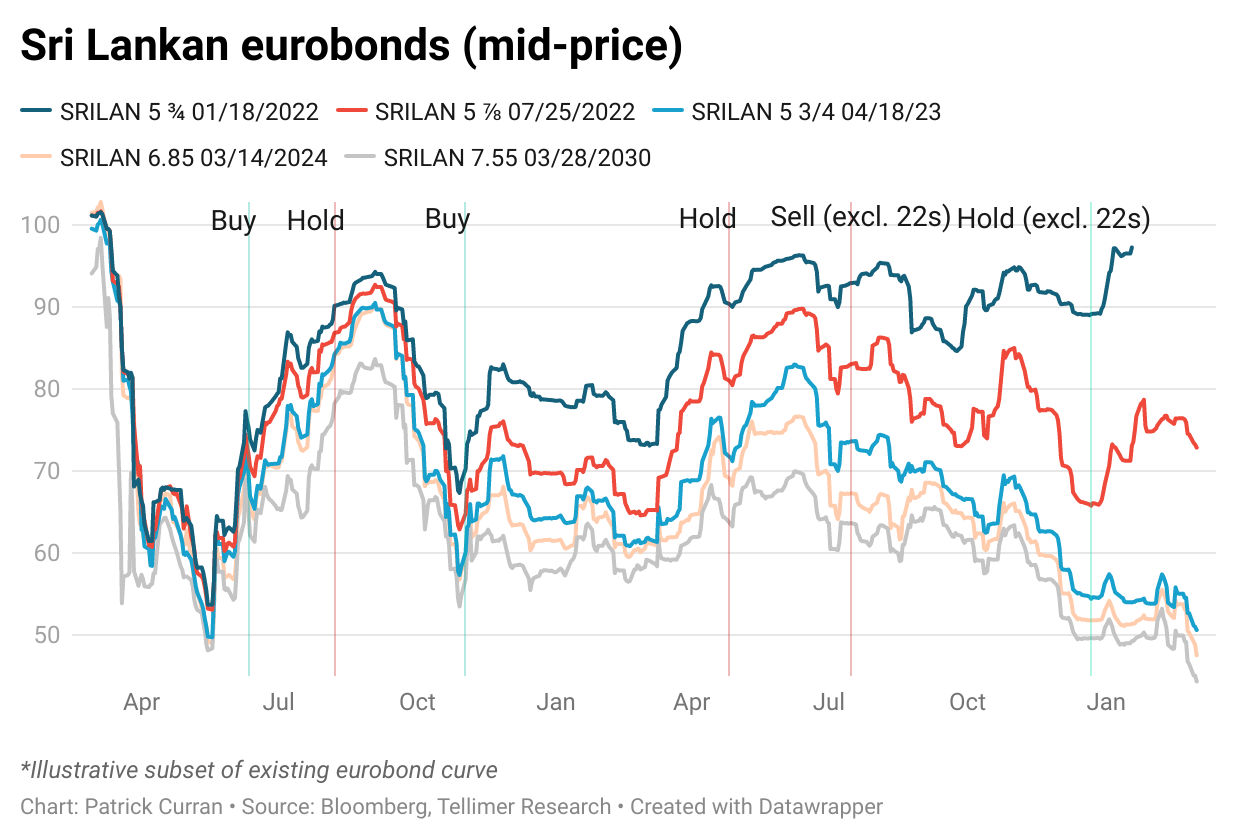 Aside from Sri Lanka’s sensitivity to global risk aversion and financing conditions, in light of its near-distressed status, the move can be explained by the sensitivity of Sri Lanka’s balance of payments to tourism and oil prices. 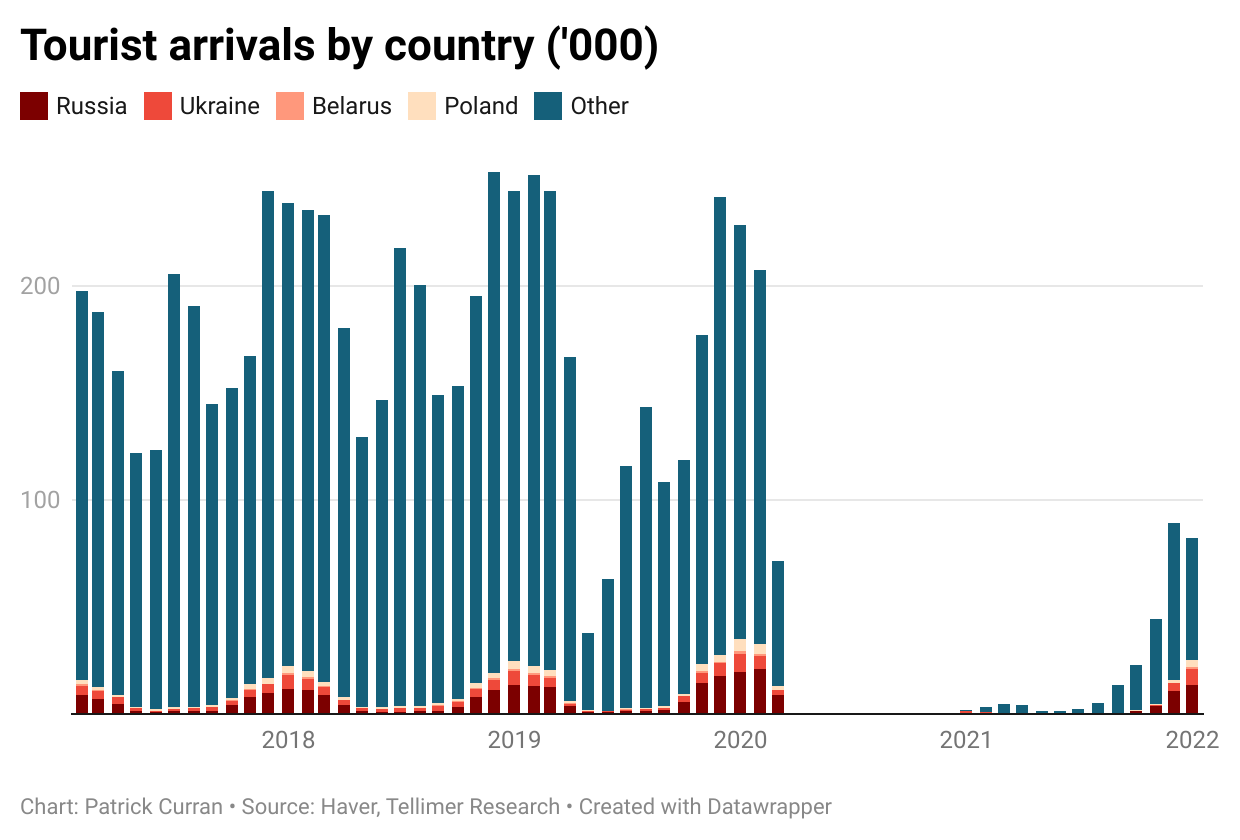 Beyond tourism, Russia is also a major export market for Sri Lankan tea, and has been the third-largest buyer of the commodity over the past two years (with total exports of US$195mn to Russia over the first 11 months of 2021), with buyers from Russia reportedly citing “affordability issues” due to RUB depreciation.

It will also exacerbate severe fuel shortages in Sri Lanka after the state-run Ceylon Petroleum Corporation (CPC) reported that it had run out of cash to buy fuel, forcing the central bank (CBSL) to release FX to pay for diesel shipments that were stuck at the port due to nonpayment.

Alongside depleted hydropower reservoirs, which have fallen by as much as 50% due to limited rains, the fuel shortage has led to severe power cuts in recent weeks. Scheduled outages by the Ceylon Electricity Board have risen steadily to 7.5hrs on 2 March.

Rising fuel prices will also push up inflation, with the national CPI rising to a record 16.8% in January (and the Colombo CPI rising to 15.1% in February), the highest rate in Asia. The CBSL may have to reconsider its accommodative stance at this Friday's MPC meeting to prevent a more sustained inflation spiral, with 364-day T-bill yields rising to 9.95% from 8.53% at last week's auction in anticipation of higher rates.

Despite increased T-bill yields at today's auction, the CBSL was only able to fill two-thirds of the amount of T-bills offered, hinting at the need for even higher yields to avoid funding pressures and accelerate already-rampant monetization (with the CBSL's net credit to the government rising aggressively by LKR 293bn in January, after rising by LKR 1,225bn, or 7.5% of GDP, in 2021).

Given its weak balance of payments (BOP), large reliance on Russian and Ukrainian tourists, and large oil imports bill, Sri Lanka is one of the countries most impacted by the Russia-Ukraine conflict, which explains its relative underperformance since the invasion began last week.

Despite a worsening BOP crisis, the government has continued to shun the IMF in favour of bilateral funding and “non-debt inflows” like the securitisation of remittances and sale of underutilised assets (which are unlikely to materialise). In addition to the US$1.5bn of support already announced from India, it is also reportedly in discussion for another US$2bn of funding from Middle Eastern banks.

CBSL Governor Cabraal remained intransigent in a Bloomberg interview last month, saying that investor confidence had already been restored without an IMF programme and asking “what more could it do?” He also claimed that the LKR is trading at a “fair level”, even as it has traded above LKR 250/US$ on the parallel market, and boldly passed the blame for rising inflation on to a lack of IMF support post-Covid.

The IMF concluded a virtual Article IV mission at the end of last year and presented it to the IMF Executive Board on 25 February, but the report has not yet been published and the IMF confirmed on 10 February that it had not received a request for financial support. But despite Cabraal’s stubbornness, the worsening crisis could be boosting momentum for an IMF programme behind the scenes, with the Energy Minister saying that “the majority of the cabinet ministers are for an IMF deal.” But unless the finance ministry and central bank are on board, that sentiment may be meaningless.

Debt restructuring also appears to be increasingly on the table, with Sri Lankan officials reportedly meeting with Rothschild & Co. and Lazard last month to discuss plans to resolve its ongoing crisis, including asset sales and securitised debt facilities. While Cabraal is still adamant publicly that all external debt will be repaid, severe FX shortages, rising oil prices, and a potential slowdown of the tourism recovery will make it increasingly difficult to avoid exploring restructuring as a way out of the crisis (which we have long argued is the only viable way out, barring a major and unlikely policy shift).

To get a sense of Sri Lanka’s monthly FX requirements, we construct an illustrative sources & uses table (see notes for assumptions). In short, we estimate that Sri Lanka will need to plug a financing gap of cUS$1.2bn each month in February and March and cUS$600mn from April to December versus reserves of just US$2.4bn in January (of which only US$600mn is liquid FX).

Even after factoring in the US$1.5bn of funding from India (which is non-fungible trade credit) and a potential US$2bn of Middle East bank financing (which may not materialise), total reserves will fall below zero by August and liquid FX reserves by May without additional new funding (coinciding with the US$1bn eurobond maturity at the end of July, and leaving little, if any, money to pay it). 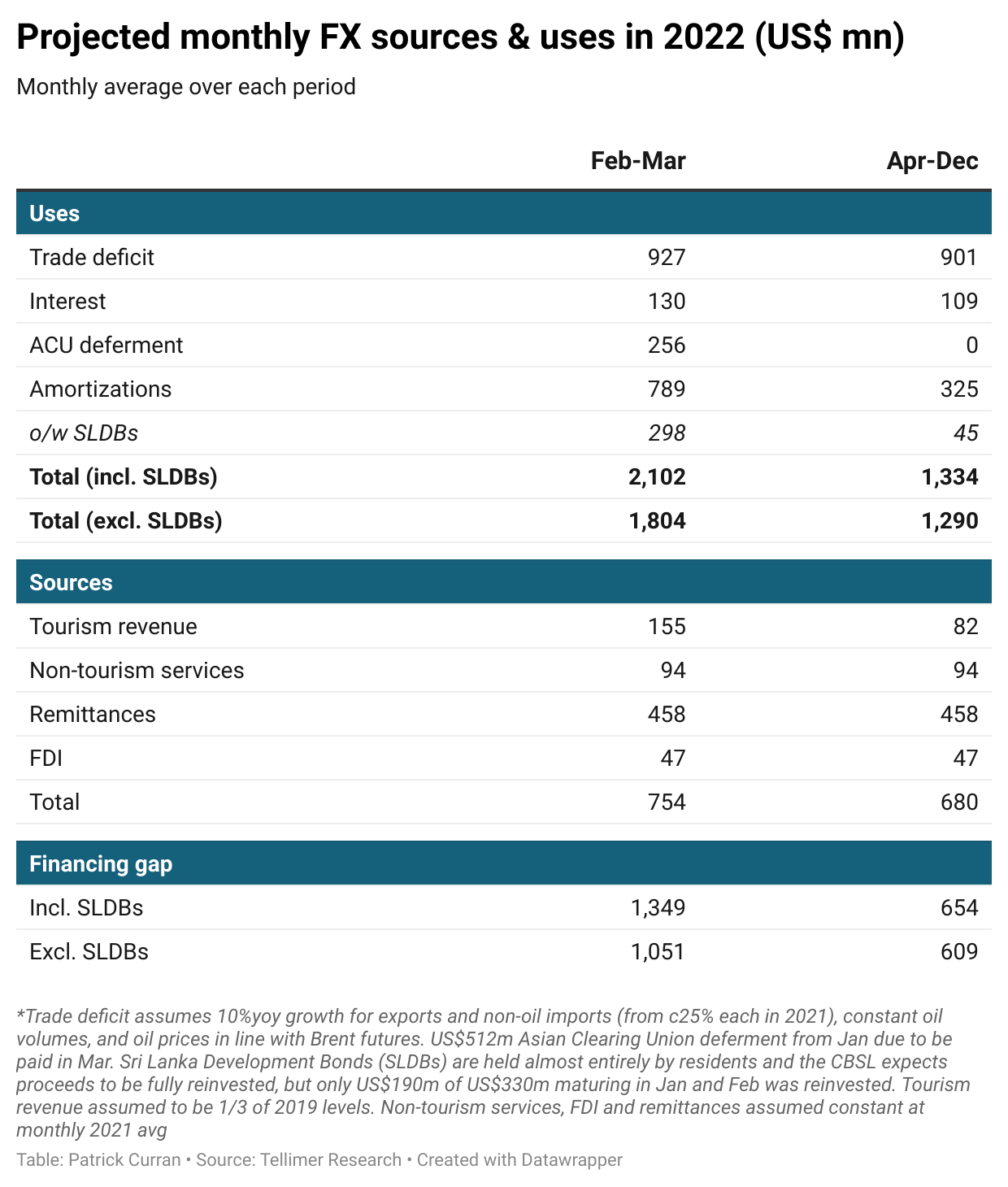 The longer the government resists an IMF programme and reforms, the more recovery values are likely to resemble the bear case. And with the Russia-Ukraine conflict aggravating the BOP crisis, we think the recent bond downturn is appropriate and retain our Hold recommendation at US$47.55 (51.45% YTM) on a mid-basis for the SRILAN 6.85 03/14/2024s at the time of writing on 2 March on Bloomberg, with bonds now likely trading roughly in line with recovery value.

Conversely, we think that it is decreasingly likely that Sri Lanka will be able to pay its US$1bn eurobond maturity in July. While prices have decreased in the past week, at cUS$73 they are still above December levels and are pricing in just a c45% probability of default. Given the ongoing BOP deterioration, we think the probability of default has risen to over 50% and that risks are skewed to the downside. As such, we initiate with a Sell recommendation on the SRILAN 5 ⅞ 07/25/2022s at US$72.9 (102% YTM) on a mid-basis at the time of writing on 2 March on Bloomberg.