Sri Lanka’s official reserve assets once again plummeted in January, falling from $3.14bn to US$2.36bn (1.4 months of trailing goods imports). The decline occurred despite Sri Lanka drawing on the US$400mn SAARC facility from India and postponing US$512m of payments due to the Asian Clearing Union (ACU), meaning it could have been even worse. 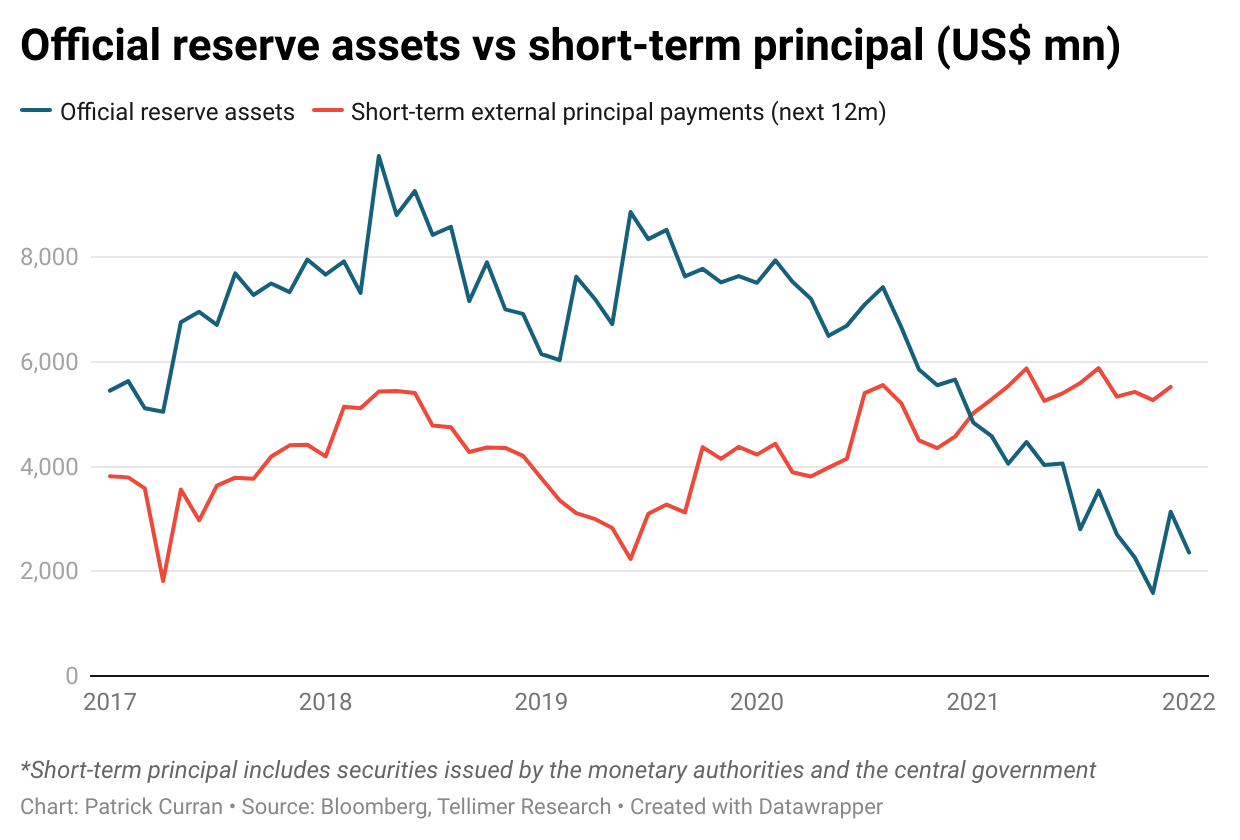 The underlying reserves picture is even more concerning, with just US$2.08bn of FX reserves versus US$1.94bn of net swap positions. This includes the US$1.5bn swap from the People's Bank of China (PBoC), which likely includes restrictions on its usage. Netting out the PBoC swap line would leave Sri Lanka with just US$600mn of 'usable' FX reserves.

This compares with external principal payments of US$5.52bn due by the central government and monetary authorities* over the next year (or US$6.9bn with interest), including US$1.58bn due in February and March alone. With the rescheduled ACU payment now expected to fall due in March, that number rises to US$2.09bn (not including additional ACU obligations accumulated in the past two months), exactly in line with gross FX reserves.

With short-term external debt payments trumping even the most generous definition of FX reserves over the next two months, reserves could be depleted in Q1 without offsetting bilateral inflows. The government hopes to finalise an additional US$1bn of trade credits from India by early March, and is reportedly seeking trade credits from Australia and Pakistan totalling US$200mn each, as well as funding from Japan, adding to the US$500mn credit line recently secured from India for fuel imports.

However, the problem with Sri Lanka’s financing pipeline is that trade credits are not fungible. While they can potentially slow the outflow of FX to finance imports (which have surged by 36% yoy from January to November versus a 34% rise in exports, widening the trade deficit by US$400mn over that period) and ease FX shortages (with the local press reporting c1,500 containers currently stuck at ports due to lack of FX, also hinting at the potential restrictions on the use of its existing trade credits and swap lines), they cannot be used to meet Sri Lanka’s looming debt payments.

Despite an increasingly grim external outlook, Sri Lanka’s eurobonds have rallied in the past week on news that the government has sought technical support from the IMF, with the SRILAN 6.85 03/14/2024s rising by 3.6pts (6.9%) so far this month to US$55.5 at the time of writing. However, Central Bank of Sri Lanka (CBSL) Governor Cabraal has once again denied that the government is seeking a funded IMF programme, with the IMF headlines referring to an ongoing routine technical mission, saying that the government is pursuing an “alternative strategy” and that there is “no necessity to start any restructuring talks". 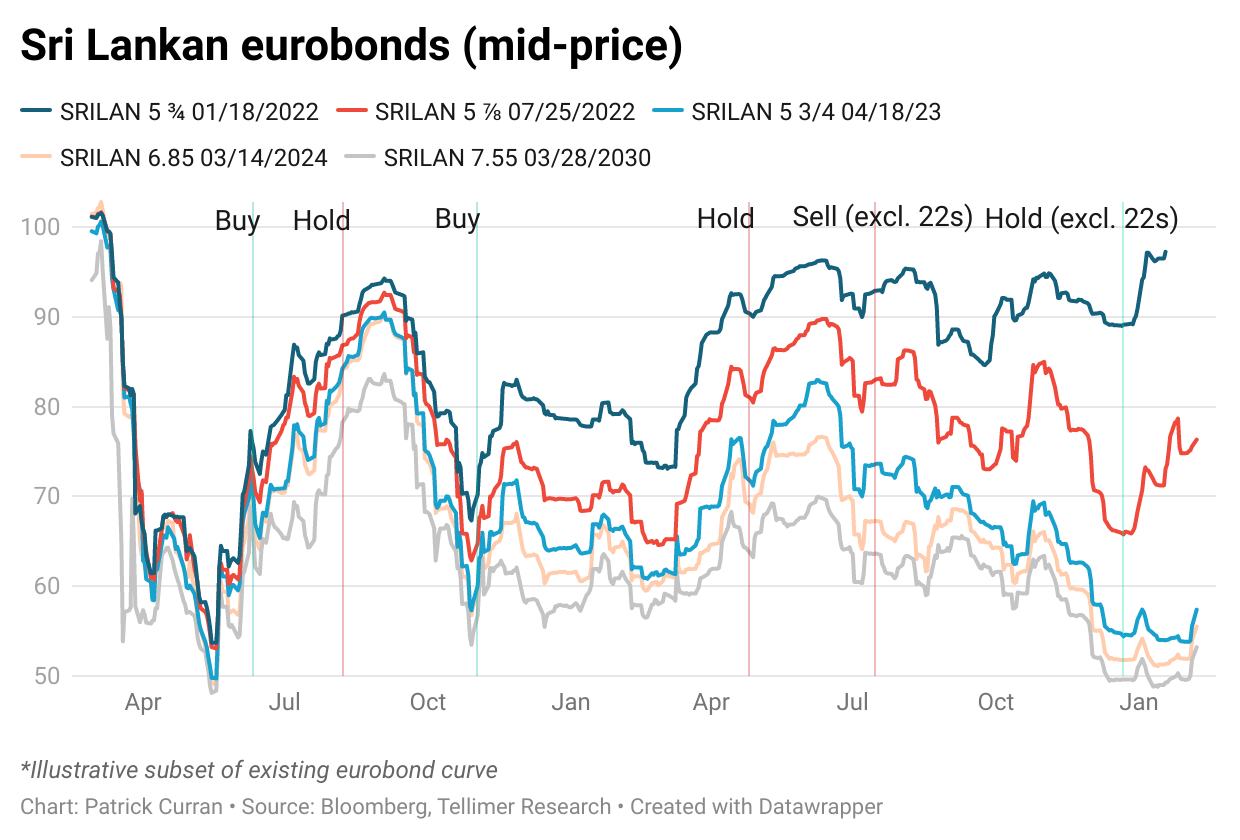 Even if Sri Lanka pulls an about-face and reaches out for an IMF programme, the Fund would require a debt restructuring anyway in the likely event that it deems Sri Lanka’s debt to be unsustainable. Further, negotiations would likely be protracted as the government continues to resist difficult reforms, with the CBSL hiking its lending rate by a tepid 50bps to 6.5% last month even as inflation spiked to 14.2% yoy in January (the highest in Asia), T-bill holdings by the CBSL rising by another LKR227bn (US$1.1bn) ytd (hinting at further deficit monetisation), the CBSL continuing to defend its unsustainable currency peg of c202/US$ even as the parallel rate trades at c250/US$, and a lacklustre 2022 budget.

Against this backdrop, we think the recent bond rally is unjustified. Indeed, we think January’s drop in reserves set against a steep maturity profile in February and March increases the risk that Sri Lanka defaults even before its US$1bn eurobond matures in July. With Sri Lanka continuing to resist reforms and an IMF programme, it will be totally reliant on fresh bilateral financing to continue meeting its external obligations, making Sri Lanka’s current debt repayment strategy look more like a Ponzi scheme than a credible plan to avoid default.

That said, with bonds sitting near recovery value, we retain our Hold recommendations on Sri Lanka’s post-2022 eurobond curve at a price of US$55.5 (40.17% YTM) on a mid-basis for the SRILAN 6.85 03/14/2024s at the time of writing on Bloomberg. We are still agnostic on the SRILAN 5 ⅞ 07/25/2022s given the uncertainty over Sri Lanka’s financing pipeline, but think it looks increasingly likely that Sri Lanka will run out of reserves before it falls due. Nonetheless, we continue to refrain from rating the bond at a price of US$76.3 (74.8% YTM) at the time of writing on Bloomberg, with large risks to prices on both the upside and downside. Beyond July, we still think default is inevitable.

*Note: We incorrectly interpreted this figure as referring to both public and private debt in previous publications. We apologise for the error.