Russia’s invasion of Ukraine has impacted Sri Lanka severely, both in economic terms (from lower tourism and higher oil imports) and market terms (with Sri Lanka as the weakest EMBI constituent post-invasion, besides Russia, Ukraine and Belarus).

Although bonds rebounded yesterday amid a broader EM rally and reports that the government could be softening its resistance to an IMF programme, with the SRILAN 7.55 03/28/2030s rising from a low of US$39.1 on 8 March to US$42.4 as of cob on 10 March, they remain far below the pre-war (18 February) price of US$49.9. 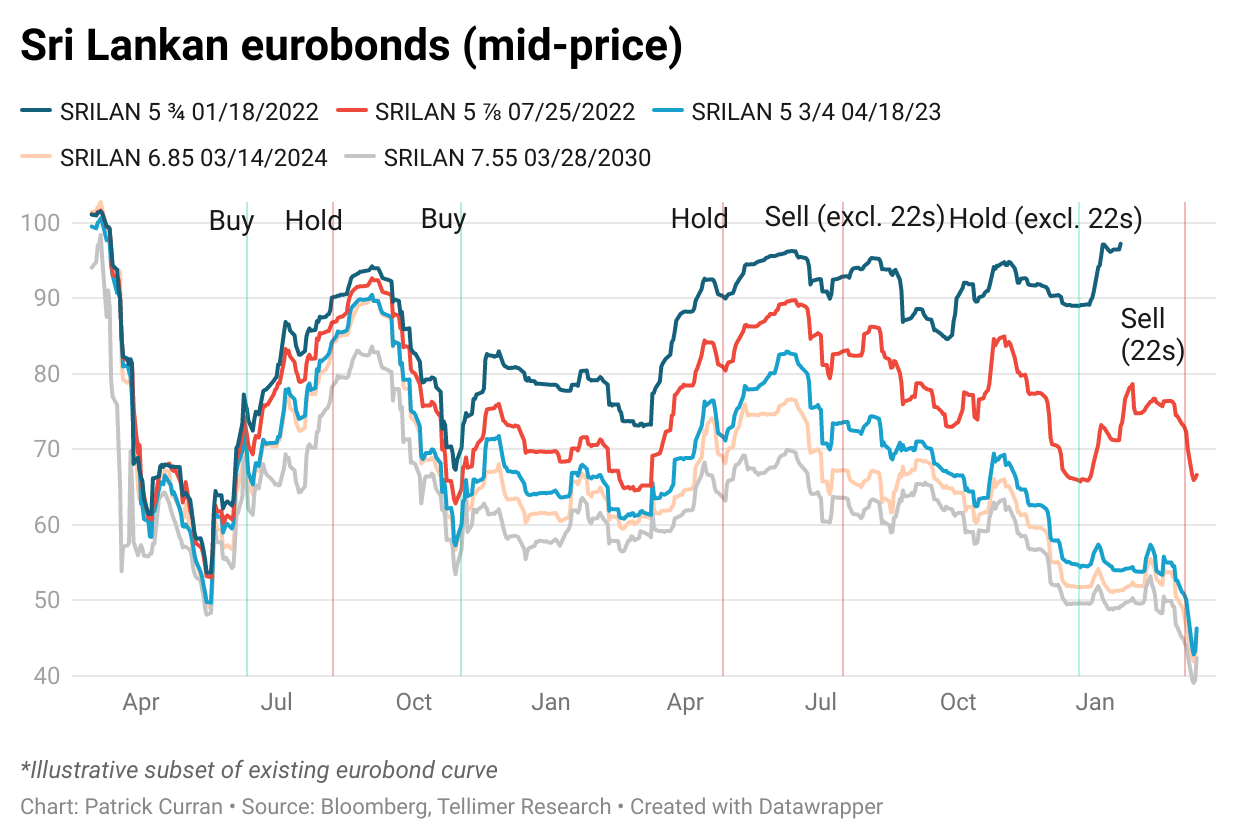 Sri Lanka’s worsening crisis has finally prompted a response from its central bank (CBSL) in the form of an interest rate hike and currency devaluation, which may help keep the lid on rising imports and FX shortages. And while the initial devaluation appeared to be to a new peg of LKR230/US$, the CBSL has since clarified that it will allow the currency to float, and it closed the day yesterday at LKR255/US$, roughly in line with the parallel market rate and bringing the total devaluation thus far to c21%.

The government has reportedly begun to reconsider its resistance to an IMF programme, which is undoubtedly positive, but it is still early days and we do not think it has yet made any overtures to the Fund. In any case, we think it is too little too late for Sri Lanka. Its debt burden is clearly unsustainable and the recent policy shift, albeit positive, will not be enough to stave off default. As such, we think the question of restructuring is one of timing rather than of likelihood.

Against this backdrop, we update our recovery analysis for Sri Lankan eurobonds to see where the recent decline has taken them relative to recovery value. We find that bonds are broadly trading in line with recovery value in our base case, restructuring at a 12-14% exit yield and on a probability-weighted basis at a 10-12% exit yield, implying some potential upside but with significant downside risks, too.

In the report that follows, we update our debt sustainability analysis (DSA) for Sri Lanka and apply a restructuring framework and recovery analysis to justify our recommendations.

Sri Lanka’s latest central government debt figures show a stock of LKR17,414bn (US$86.4bn, 107.1% of GDP) in November, with 67.1% of GDP in domestic debt and 40% in external debt. However, Sri Lanka defines public debt by residency. Using the latest data from June, domestic debt includes cUS$2.4bn of Sri Lanka development bonds (SLDBs, which are US$-denominated bonds issued under local law) and US$2.2bn of eurobonds. On the other side, foreign debt includes just US$13m of non-resident investment in T-bills and bonds. 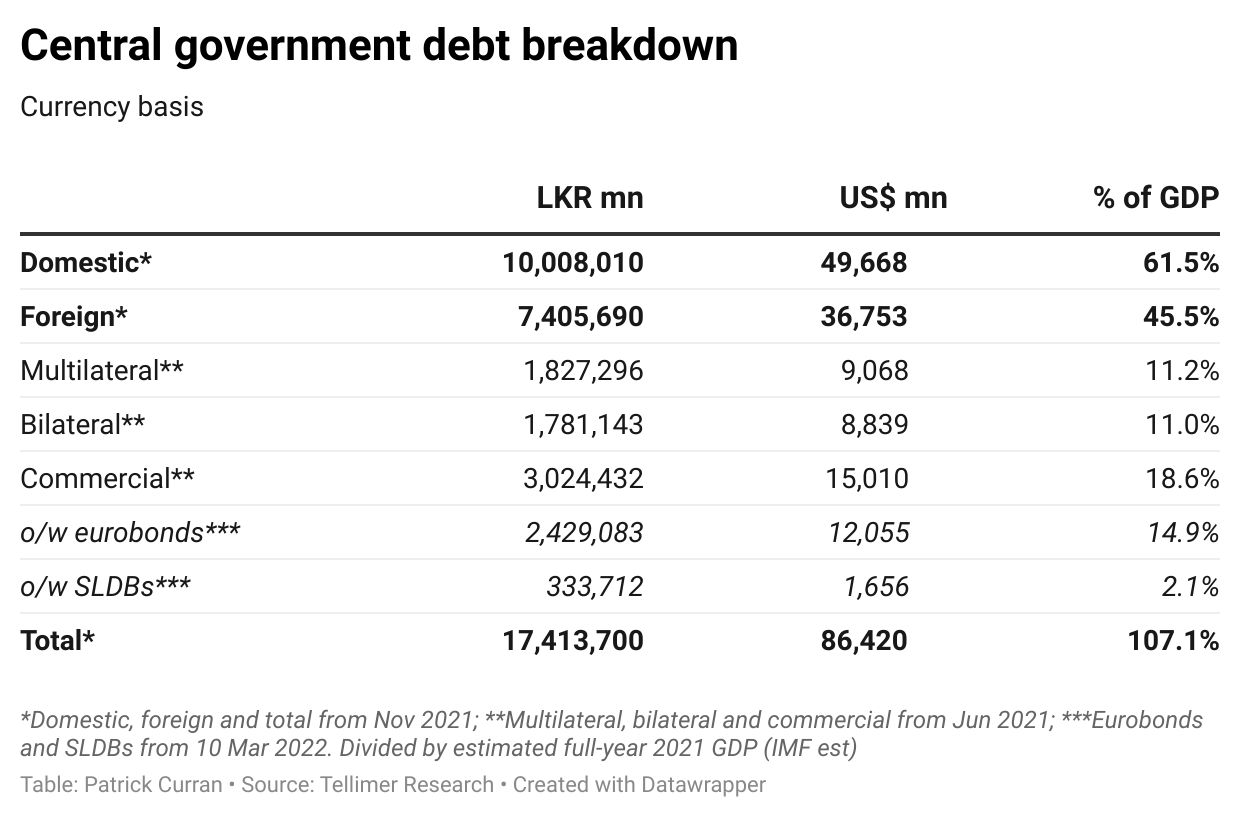 Sri Lanka’s debt composition will also have important restructuring implications, as decisions will have to be made on how to treat SLDBs and domestic debt (more on this later).

The press release last week following the IMF’s Article IV mission in December cited a large rise in public debt from 94% of GDP in 2019 to 119% in 2021 (including contingent liabilities of 12% of GDP), saying that public debt “has risen to unsustainable levels”. Against this backdrop, we think the window of opportunity for Sri Lanka to avoid default with an IMF-backed reform programme has closed, and that even if Sri Lanka turns to the Fund, a restructuring will likely be required, alongside an ambitious reform programme, to set debt on a sustainable path.

As the IMF’s Article IV report has not yet been made public (which may suggest that the authorities have vetoed publication, for the time being), we develop our own DSA instead. We assume a rebound in growth to 4% over the medium term and a consolidation of the primary deficit from a 4.9% of GDP deficit in 2021 to a 0.7% surplus in 2025 (in line with the government’s plans) and 1% of GDP thereafter (an ambitious 3pp consolidation relative to 2019 levels and almost 0.5pp higher than the 2010-19 max, which we take as the limit of what is politically feasible). 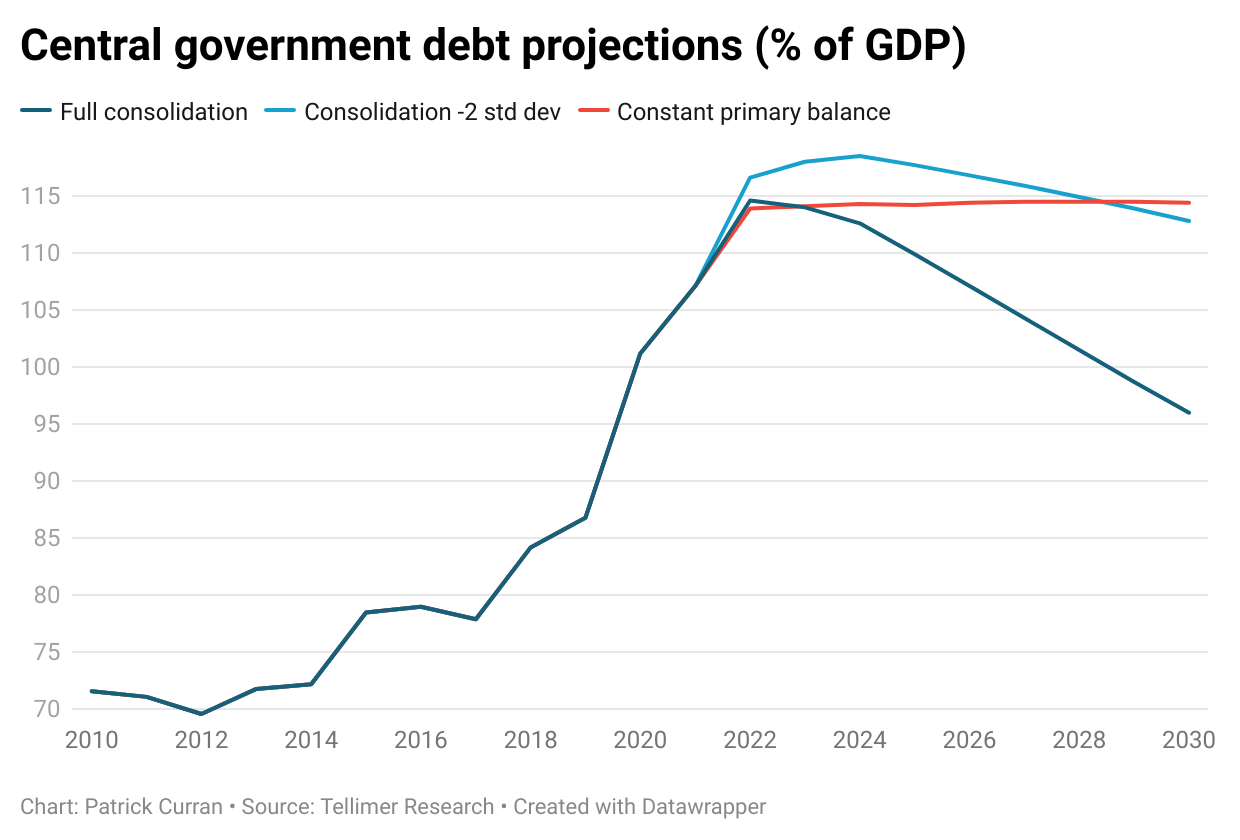 In this case, central government debt rises to a peak of 115% of GDP in 2022 (due largely to the currency devaluation) and falls slowly to a still-elevated 96% of GDP by 2030. We also examine two alternate scenarios. One (which is perhaps the more realistic scenario) lowers the primary balance by 2 standard deviations (the 2010-19 standard deviation is 1% of GDP) relative to the baseline, while the other holds the primary balance constant at the pre-Covid (2019) level of -2% of GDP. In both scenarios, central government debt stays above 113% of GDP through 2030 (and total public debt above 125% of GDP).

In any case, it is clear that Sri Lanka needs a mix of heavy fiscal lifting and a debt restructuring to bring debt back to sustainable levels. While there are clear sustainability thresholds under the DSA framework for low-income countries, the recently updated framework for “market-access countries” like Sri Lanka introduces a multilayered approach, based in part on a new multivariate regression, and does not have such concrete thresholds. As such, we assume that Sri Lanka will aim to reduce the present value (PV) of external debt to c30% of GDP by 2030 (roughly where it was in 2014 before the debt buildup, and from c45% currently) via fiscal consolidation and debt restructuring.

Under the ambitious consolidation plans outlined above, this would require a 30% nominal haircut (which would also bring the PV of external debt to a more manageable 150% of exports, from 240% now). This assumes bilateral and commercial debt is restructured pari passu, but multilateral debt (27.5% of the external stock) is untouched. It also assumes SLDBs (99% of which are held by residents) will be treated as external debt. This assumption is debatable, as the bonds are subject to local law and the government could decide to treat them differently from other US$-denominated debt.

We also assume that domestic debt won’t be touched, as 35% of the banking sector’s assets is comprised of government debt and restructuring could have significant financial stability implications. This assumption is also debatable, as the PV of central government debt stock will remain high if only external debt is restructured (c90% of GDP in 2030, in this case). As such, the government may include domestic debt in the restructuring in exchange for other relief to reduce financial instability (this could be either via nominal haircuts, or some sort of Jamaica- or Barbados-style debt exchange).

We also formulate a worst-case restructuring based on the more realistic consolidation plans (eg baseline primary balance minus two standard deviations), which would require a nominal haircut of 50% of all commercial and bilateral external debt and SLDBs to reach the 30% PV threshold in 2030. This is an incredibly punitive restructuring, and creditors would likely push back against such an offer for lacking the requisite burden-sharing from the government or taxpayer in the form of consolidation, but we use this to illustrate a worst-case restructuring and establish a reasonable floor for the price of the bonds.

Now that we think default has become inevitable, we take our previous restructuring analysis a step further by creating a new suite of bonds rather than applying a maturity extension across the existing curve. We assume that Sri Lanka will default when the next eurobond matures on 27 July, that it will complete its restructuring by the end of the year and that unpaid interest will be capitalised (although the process could take much longer, especially if Sri Lanka defaults without proactively reaching out to the IMF for a programme, and if drawn out restructurings in Ethiopia and Zambia are anything to go by). 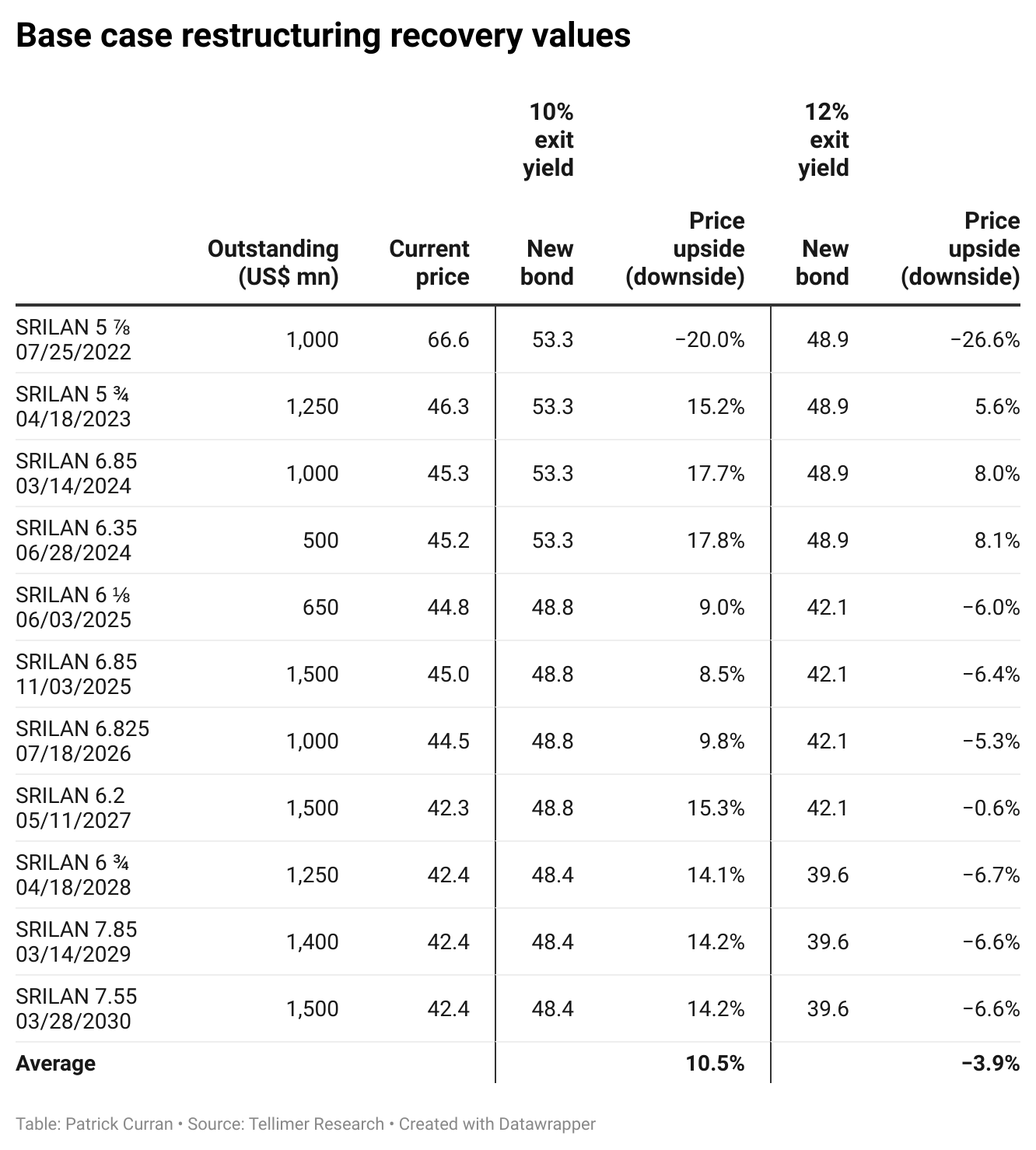 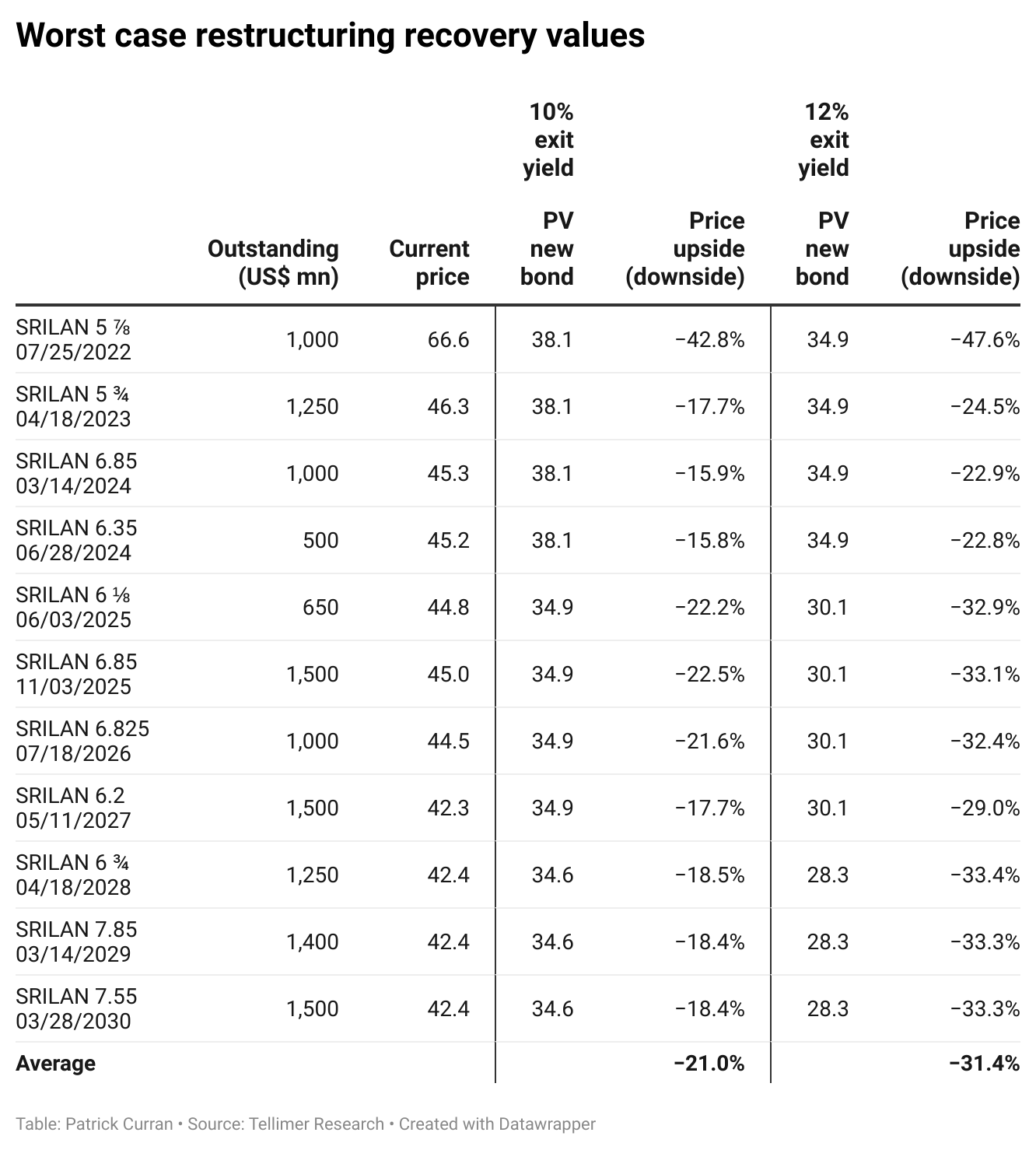 Next, we conduct probability-weighted valuation at different exit yields for the SRILAN 6.84 03/14/24 bond, which we have previously focused on as the most attractive point of entry and still think offers the best risk/reward tradeoff. We find that, in our base case, the bond is about fairly valued at a 14% exit yield. Weighting by probability, with a 75% weight for our base case and 25% for our worst case, we find the bond is fairly valued at about a 12% exit yield. This implies some potential upside for the SRILAN 6.84 03/14/24s at lower exit yields, but suggests bonds are broadly fairly valued.

Undertaking the same exercise for the SRILAN 6.2 05/11/2027s, which we think is the most attractive entry point for the longer-dated bonds, bonds are fairly valued in the base case at a c14% exit yield and on a probability-weighted basis at an exit yield of c11%. Again, this suggests some limited upside based on current prices, but, given downside risks, suggests that bonds are roughly fairly valued.

While it is normally hard to settle on a proper exit yield, this is especially the case given recent market volatility and broader rise in yields across the EM space. One could also argue that different exit yields should be used for each of the three new bonds, resulting in an upward sloping rather than flat yield curve. However, for simplicity, we keep our yields constant across maturities.

Although Sri Lanka’s bonds have dropped precipitously in recent weeks, our recovery analysis leads us to conclude that bonds are fairly valued at current prices. While the recent rate hike and devaluation are the first tangible policy steps in the right direction in quite some time, we don’t think it will be enough to alleviate external imbalances without further rate hikes and a sharp revenue-based consolidation of the budget. And with incredibly low reserve buffers and massive external funding needs, the window has likely closed to avoid restructuring with reforms and default is only a matter of time.

The government’s potential warming to an IMF programme would also be a welcome step in the right direction, but it is still early days and much will be required to secure a programme. Failure to proactively agree to an IMF programme before defaulting would lead to higher exit yields and weigh on recovery values, especially if the government’s subsequent reform plans are seen as having limited credibility and government buy-in. Conversely, proactively formulating a credible IMF-backed reform plan would lead to lower exit yields and higher recovery values.