As we highlighted in our last note (here), Sri Lanka has been sliding towards authoritarianism under Rajapaksa rule and proposed constitutional changes that aim to concentrate more power in the executive would accelerate that trend. As feared, President Gotabaya Rajapaksa gazetted constitutional amendments last week that would, among other things:

Although the two-term limit on the president remains intact, this would reverse the other aspects of the 2015 amendment aimed at limiting executive power and would weaken Sri Lankan institutions and governance.

Moreover, the jury is still out on whether the Rajapaksas will use their strengthened mandate to consolidate the budget and agree to an IMF program or to double down on the populist pro-growth policies of the past.

Initial signals are not promising, with the government announcing a new hiring program that will provide jobs for 100,000 unskilled workers. This promises to increase an already bloated wage bill, with salaries and pensions for Sri Lanka’s 1.3mn public sector workers already eating up over 50% of revenue.

In addition, a recent directive removes the 14% income tax on jewellery manufacturers and the 15% tax on gold imports, further reducing revenue at a time when it is already under intense pressure.

We await the tabling of the 2021 budget in October or November, but this seems to imply that austerity is not yet on the agenda. We fear that markets will be disappointed if the budget is tabled without meaningful consolidation, which is also likely to put an IMF program out of reach as the Fund will need to be convinced that debt can be put on a sustainable trajectory before disbursing any financing.

Governing by executive decree also increases uncertainty, with vehicle dealers calling recently for stable policies amid intensifying import controls, which have ground the sector to a halt.

Although import controls have contained BOP pressures and led to a stabilisation of LKR, their ad hoc nature is likely to slow growth and investment and create inefficiencies. If this is a preview of policymaking under the new Rajapaksa regime, then perhaps investors should be more concerned. 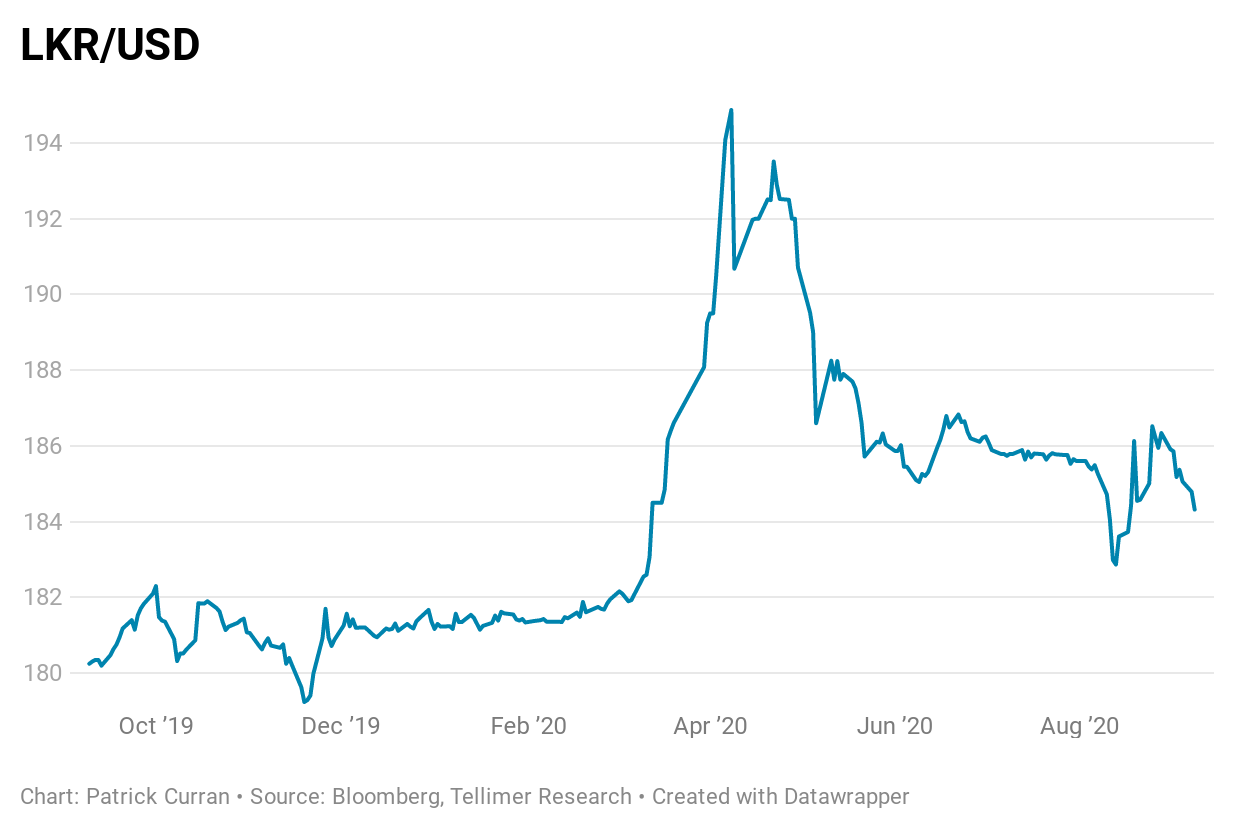 In H1, Sri Lanka’s budget deficit widened to 4.9% of GDP from 3.5% of GDP in the same period last year, with revenue down 25.1% yoy and spending down 0.6% (with a rise in recurrent spending offsetting a sharp drop in capital expenditure). This puts Sri Lanka roughly on pace to reach the IMF’s revised 9.4% of GDP deficit forecast for 2020, albeit with a deteriorating composition. 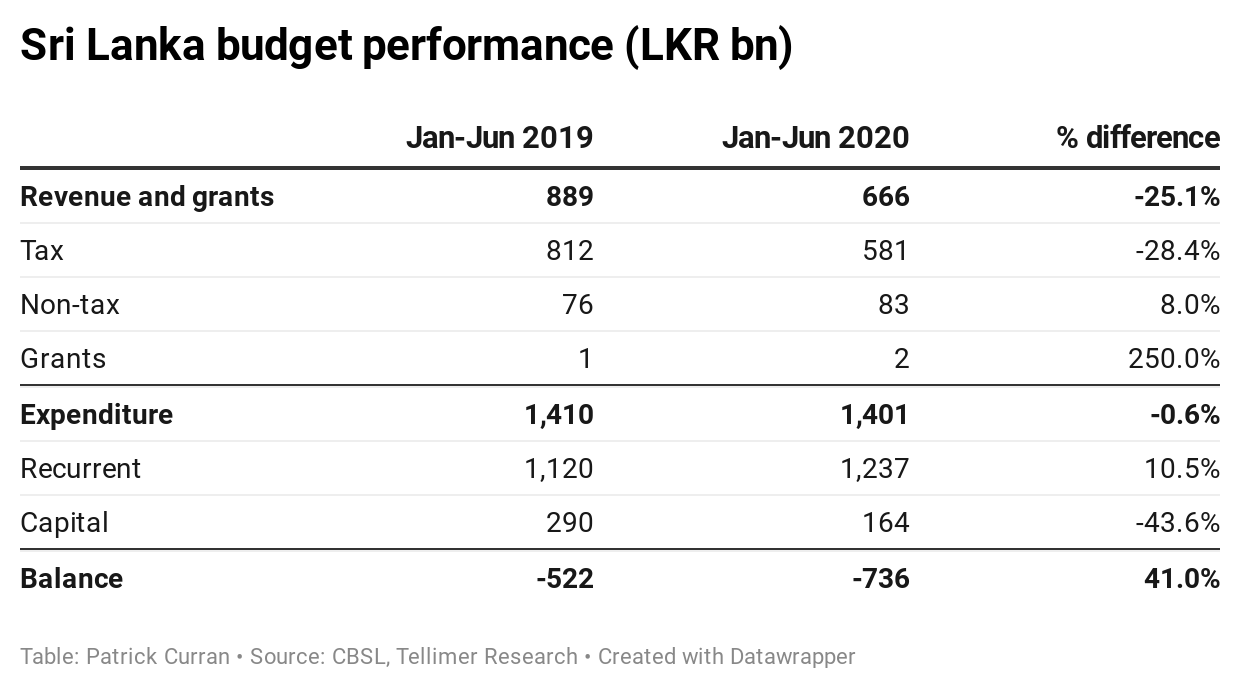 This has forced debt up by LKR1,020bn so far this year, pushing the stock from 86.8% of GDP to an estimated 93.6% of GDP (excluding government guarantees of c5.2% of GDP). The deficit was financed largely via domestic issuance, exacerbating the crowding out of the private sector as credit extended to the government rose 38.1% yoy in July versus a 4.2% rise in private sector credit (negative in real terms).

That said, Sri Lanka’s short-term liquidity constraints have eased in recent months. After falling to US$6.5bn in May, gross FX reserves have rebounded to US$7.1bn at the end of July (equivalent to 4.7 months of imports and roughly 100% of short-term external debt payments, comprising US$5.4bn of principal, US$1.5bn of interest and US$300mn of contingent obligations). 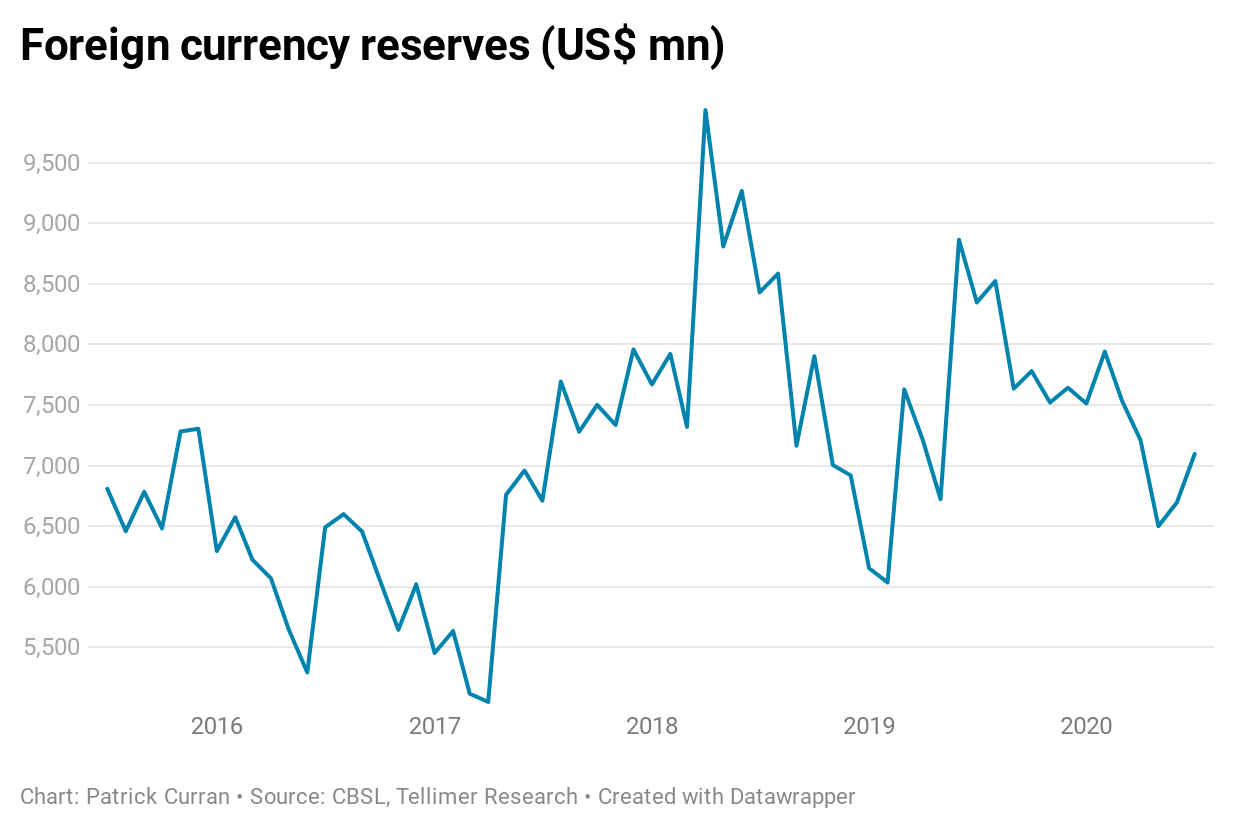 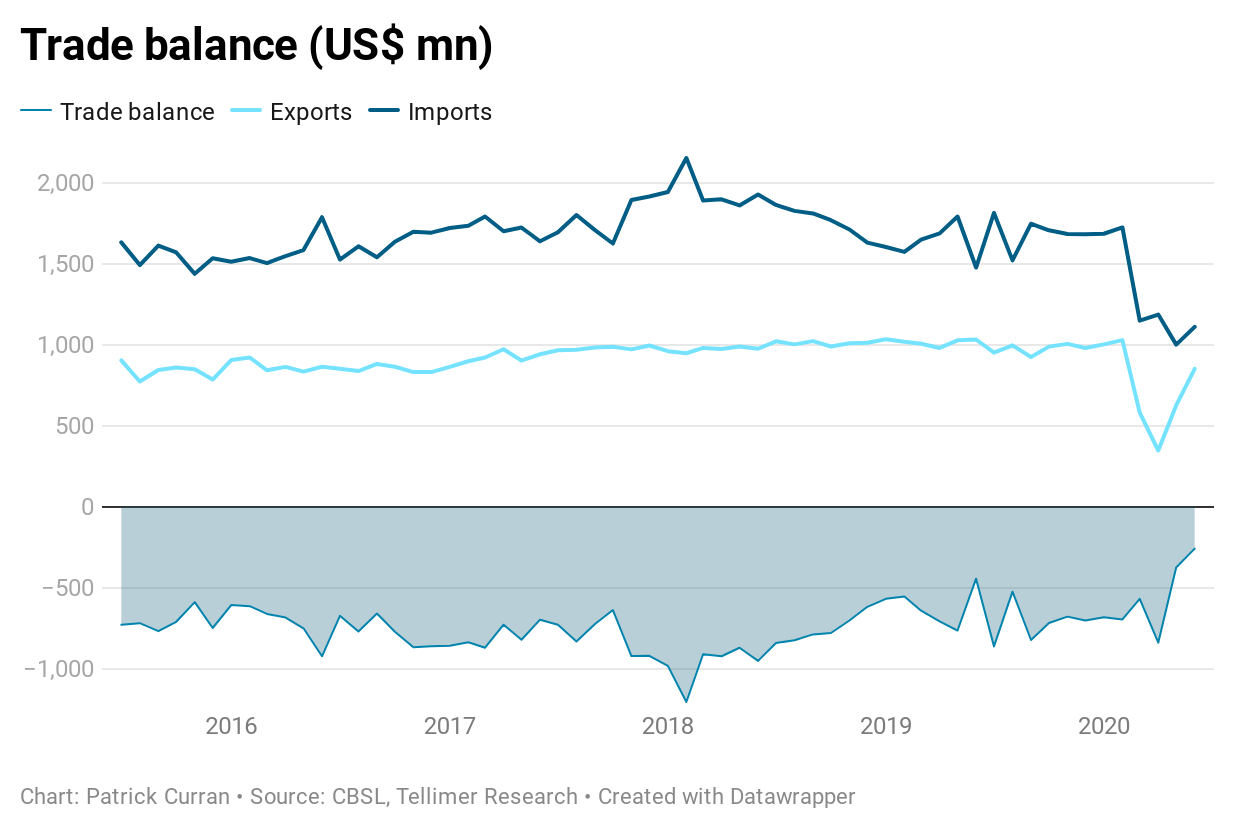 In addition, remittances actually increased in June and July and are now down only 5.5% for the year, compared with a run rate of -10% yoy through May. This has helped to mitigate the impact from collapsing tourism, with zero arrivals from April to August bringing the decline to 60% yoy so far this year (a loss of US$1.4bn). However, with the country opening back up ahead of the December to March peak season, these numbers could begin to improve. 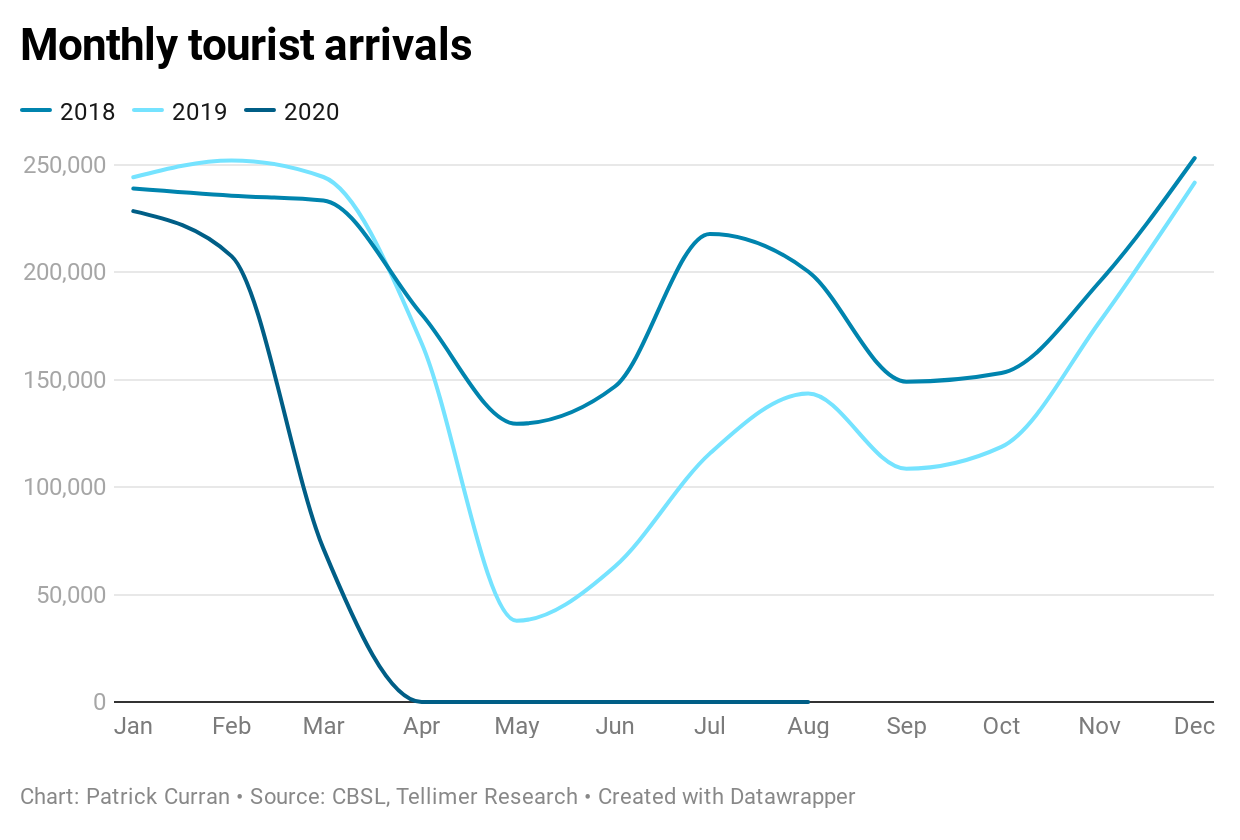 With liquidity constraints easing, our conviction that Sri Lanka will be willing and able to meet its US$1bn eurobond maturity in October is even stronger. However, beyond 2020, it is imperative that the government embarks on the path of fiscal consolidation amid a steady deluge of maturities over the next decade. 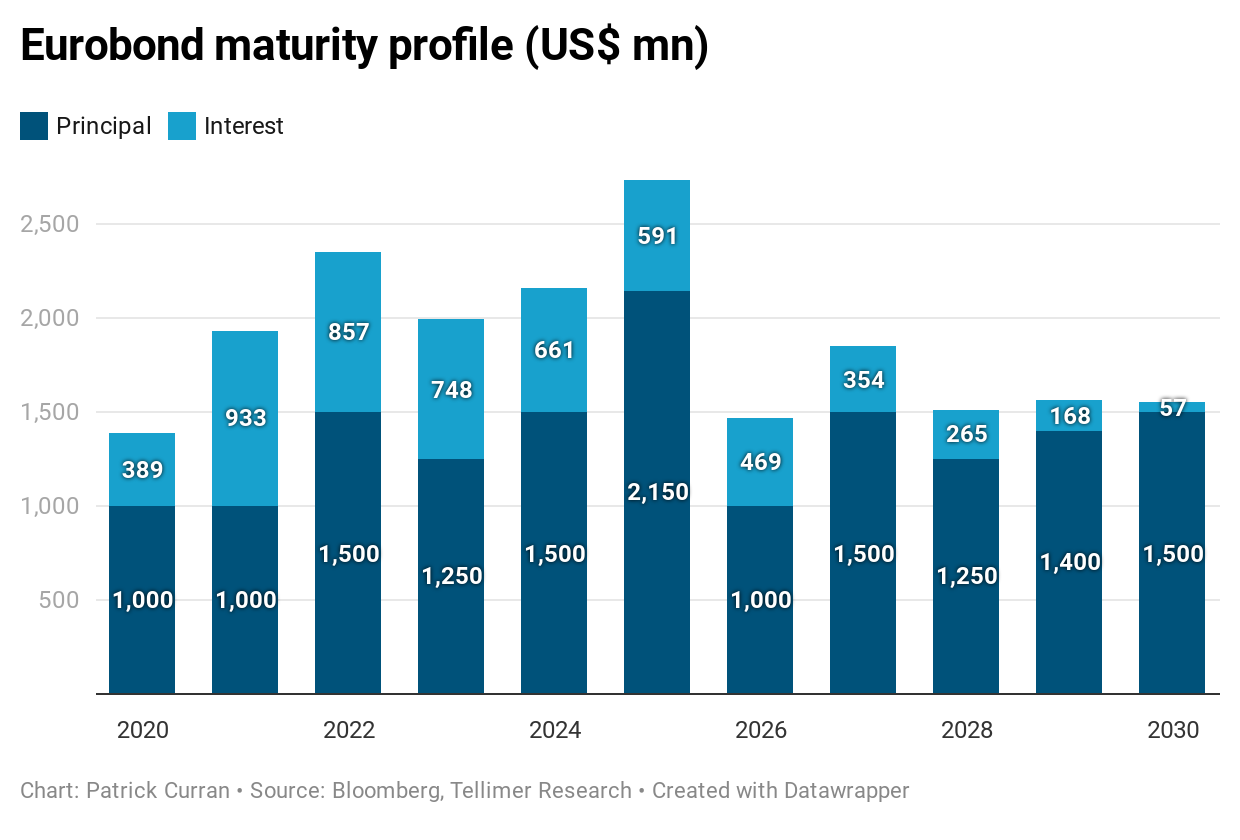 Risks now tilted to the downside

Perhaps the government will table an austere budget in the coming months and consequently unlock the requested US$800m of emergency IMF funding, but there is really nothing yet to indicate that the Rajapaksas will use their strengthened mandate to pursue that goal. Conversely, a populist budget would squash hopes of debt stabilisation and IMF funding.

The Rajapaksas' political agenda is likely to distract from the undertaking of difficult economic reforms. Just this week, parliament descended into chaos after Rajapaksa ally Premalal Jayasekara, who is under a death sentence for the 2015 murder of an opposition UNP supporter, was sworn in as a member of Parliament, potentially portending more political haggling on the horizon.

If the Rajapaksas continue wasting precious political capital to pursue non-economic goals, then necessary reforms will be delayed, IMF support will not be forthcoming and Sri Lanka will continue its downward slide. In addition, ethnic tensions will be heightened and risk derailing a nascent recovery if they boil over (with the April 2019 bombings in Colombo serving as a potent illustration).