Newly appointed central bank (CBSL) Governor Nandalal Weerasinghe kicked off his tenure with a decisive 700bps rate hike today. The statement cited “inflationary pressures that could further intensify in the period ahead,” with Weerasinghe saying CPI could rise as high as 25% next month.

The new governor added in a post-monetary policy committee (MPC) briefing that “I am here to implement independent policymaking. There is no political interference in my regime, I have made it very clear to the authorities.” 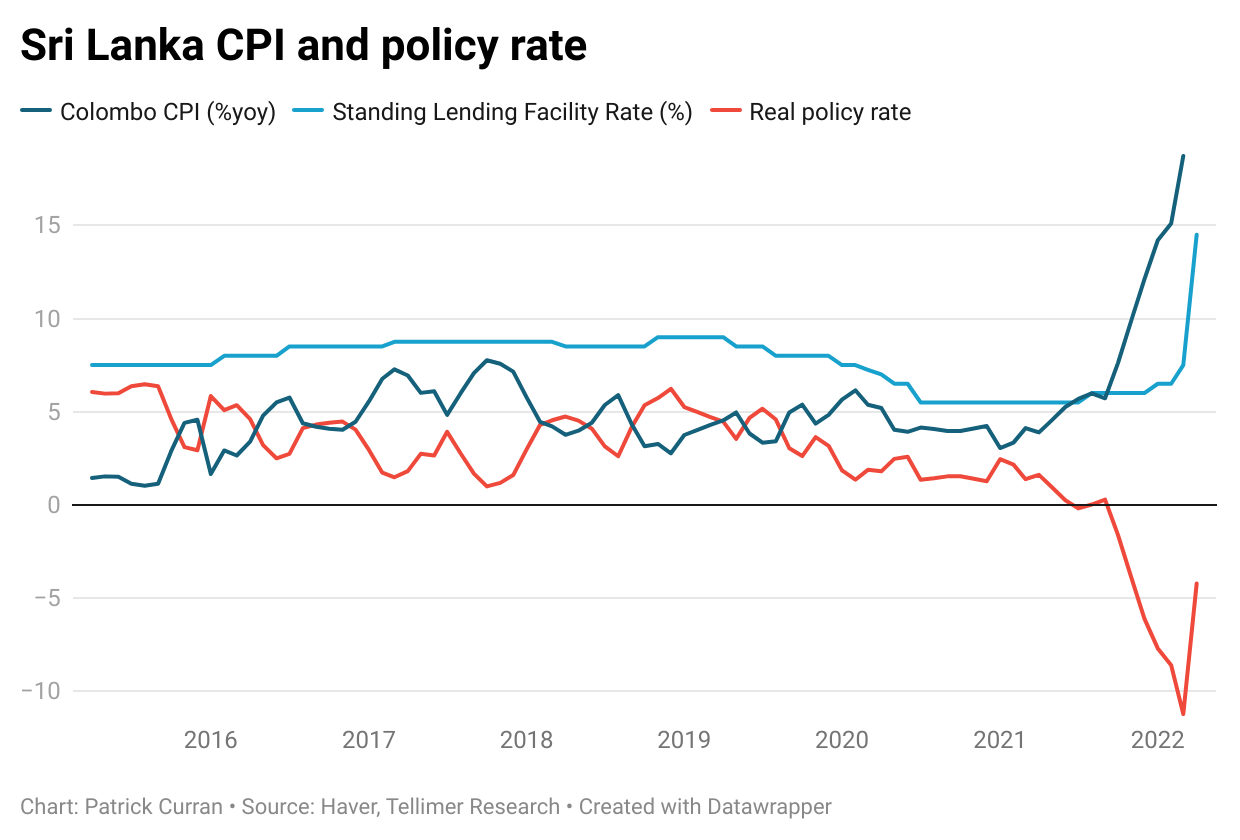 The rate hike takes the standing lending rate to 14.5%, still negative in real terms when compared to 18.7% yoy inflation in March, but a major step in the right direction. Further hikes will likely be required in the months ahead to reduce price pressures and stabilise the exchange rate, which has depreciated by 36% since it was devalued a month ago and will add to price pressures in the months ahead.

The exchange rate has now risen from 200/US$ to 315/US$ since it was devalued, which looks like an overshoot compared to a parallel rate of c255/US$ before the devaluation. However, the updated parallel rate of c370/US$ suggests further weakness could be in store.

Weerasinghe criticized the CBSL’s handling of the rupee but refused to speculate on where it’s headed, saying that the peg was inappropriate but that it should have been devalued gradually rather than all at once, which has forced the CBSL to do “damage control”. That said, he remains committed to a “flexible exchange rate policy”. 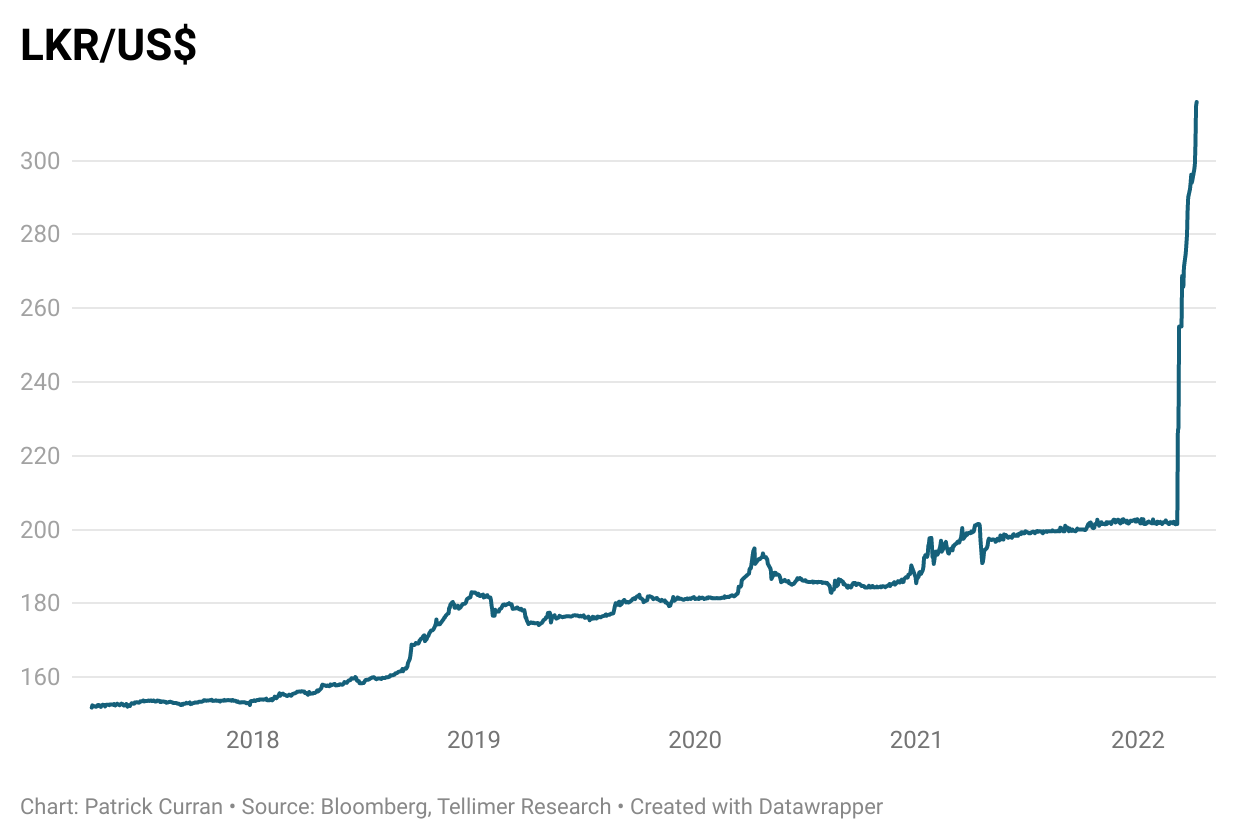 While the rate hike is welcome, it won’t have much of an impact on market rates, with the 12m T-bill yield already rising by 341bps to 15.69% at this week’s auction (although it will at least decrease arbitrage opportunities in the domestic market). Further increases will be needed to attract sufficient funding, with today’s bond auction resulting in the sale of just 30% of the bonds on offer, despite the yield on bonds due December 2027 rising to 20.2%.

Weerasinghe says that yield caps will be removed moving forward, which should allow rates to adjust and eliminate the need for the CBSL to print money when auctions are undersubscribed. While these increases are necessary, it will make it even more expensive to finance the budget deficit, with interest payments already absorbing 80% of government revenue over the first three quarters of 2021.

The rate hike is also necessary to ease external imbalances, with reserves falling further from US$2.31bn to US$1.94bn in February, enough to cover just one month of goods imports and equal to the US$1.9bn of external debt payments due over the next two months (not including US$560mn of maturing swaps). The decline would have been even greater had Sri Lanka not delayed payments on US$900mn-worth of payments to India and the Asian Clearing Union. Further, just US$225m is freely usable FX, when factoring out the US$1.5bn swap from the People's Bank of China. 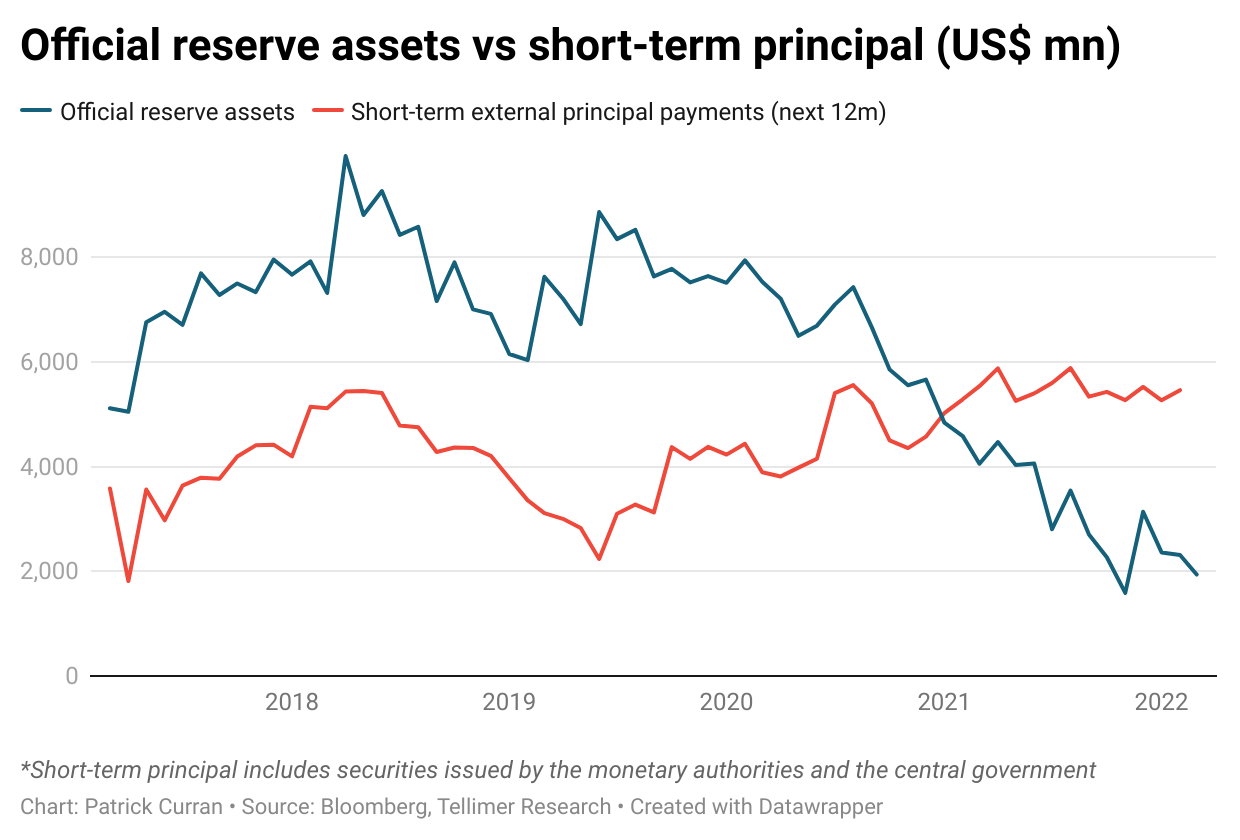 Against this backdrop, Weerasinghe has confirmed our view that a restructuring is imminent, saying that Sri Lanka will negotiate debt relief but has no intention for a “hard default”. He expressed a desire to expedite restructuring talks, and plans to appoint advisors within a week, adding that payment of the US$1bn July eurobond will depend on the debt restructuring. At the same time, an informal group of creditors holding 30% of Sri Lanka’s bonds has reportedly formed to prepare for restructuring talks.

Weerasinghe also expressed a desire to expedite IMF talks in parallel, saying that talks can take place without a finance minister in place and that Sri Lanka is seeking a virtual meeting with the IMF next week. Meanwhile, Ali Sabry, who was appointed as finance minister earlier in the week but resigned the next day, says that he retains the position as President Rajapaksa declined to accept his resignation, despite Sabry’s request that the position be “given to a more capable person”.

Rajapaksa has also appointed a three-person panel to advise on how to deal with the debt crisis and engage with the IMF and creditors. The panel includes former CBSL Governor Indrajit Coomaraswamy, Georgetown professor and former World Bank official Shanta Devarajan, and former IMF official Sharmini Coorey. This shows that Rajapaksa, too, is accelerating efforts to secure a restructuring and IMF agreement.

While Weerasinghe is so far saying all the right things, Sri Lanka’s political crisis adds to the uncertainty. Protests have continued to ramp up calling for the Rajapaksas to leave the government, and the opposition is calling for the executive presidency to be abolished. However, President Rajapaksa has continued to resist, saying that he won’t resign under any circumstances and calling for all parties in parliament to join a new government with him and his brother at the helm.

With the next presidential election due in November 2023 and the next parliamentary election in August 2025, the path ahead is uncertain. Attempts to establish a new government will be hindered by the opposition’s resistance, while early parliamentary elections may also be seen as unacceptable since President Rajapaksa would retain significant powers and they may be prohibitively costly. Instead, the opposition is planning to amend the constitution to abolish the presidency, which will require a two-thirds majority. It is unclear if they will succeed, and the process could become bogged down in the courts.

If President Rajapaksa continues to resist calls to step down, therefore, there is little visibility on how the political crisis will be resolved. And if it continues to escalate, there is a risk that ethnic and religious tensions resurface and send Sri Lanka down an even darker path. Weerasinghe acknowledged that “The situation could worsen further within next couple of weeks or months” and that “the necessary condition for it to turn around is not just the economic policies but also two key components – political stability and social stability – and there we have some challenges at this point.”

Weerasinghe has injected new life into Sri Lanka’s reform and restructuring efforts. We are encouraged by today’s rate hike which, alongside last month’s devaluation, will help set the stage for more constructive IMF negotiations. However, other prior actions will be required to secure a program, including reversal of the 2019 tax cuts and the initiation of good-faith engagement with Sri Lanka’s creditors. 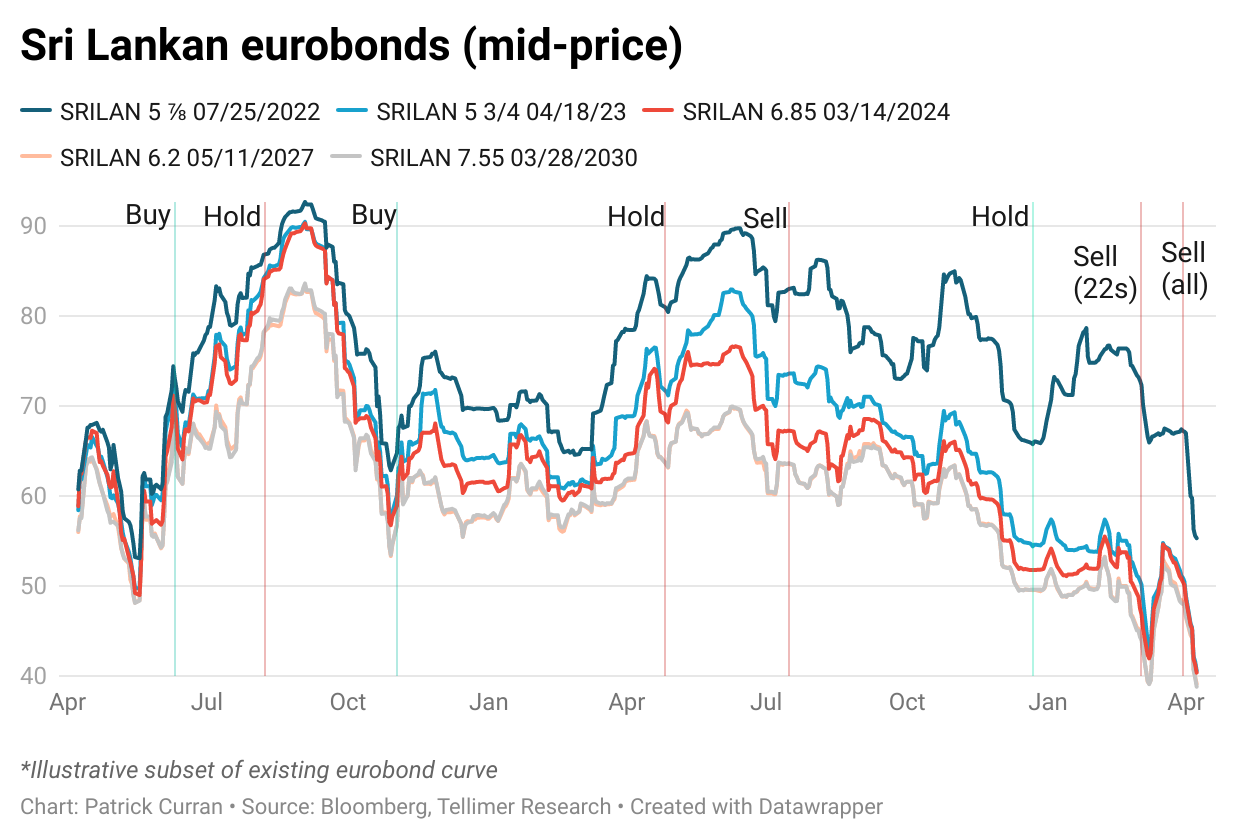 This compares to our target price of US$43-47 for the SRILAN 6.85 03/14/2024s and US$37-43 for the SRILAN 6.2 05/11/2027s based on exit yields of 10-12%. While the political crisis may lead to higher exit yields and lower recovery values, introducing some further downside risk, we think default is now largely priced in and are encouraged by the apparent policy shift under Weerasinghe.

That said, it is still possible that bonds will dip further when Sri Lanka officially defaults (with the next test coming on 18 April, when US$78m of coupons come due on the SRILAN 5 ¾ 04/18/2023s and SRILAN 6 ¾ 04/18/2028s), potentially providing a more attractive entry point. And it is hard to imagine bonds rebounding towards our calculated recovery values without further clarity on how the political crisis will be resolved.

Overall, given this week’s price drop and today’s policy shift, set against heightened political risks, we think the risks are relatively balanced, with the potential for a more attractive entry point if and when payments are missed (though we note that Sri Lankan eurobonds now trade below their Ukrainian equivalents, showing the extent to which the political and economic crisis has been priced in).