Sri Lanka’s political crisis has continued to worsen. First, President Gotabaya Rajapaksa and Prime Minister Mahinda Rajapaksa lost their cabinet in a mass resignation on 3 April, after the declaration of the state of emergency. Now, on 5 April, they have lost their parliamentary majority. 42 MPs have reportedly left the Rajapaksa-led SLPFA and declared themselves independent (including 14 members from the SLFP, 16 from smaller alliance parties, and 12 from Rajapaksa's SLPP itself). This would shrink the SLPFA's share of seats from 65% to 46%.

President Rajapaksa has responded by calling on all 11 parties represented in parliament to "come together to accept ministerial portfolios in order to find solutions to this national crisis." However, Sri Lanka's opposition parties, including the main opposition party SJB and now independent SLFP, have rejected Rajapaksa's plan to form an interim government, calling for the brothers to resign and for constitutional changes to limit Rajapaksa's executive powers, including the ability to call for elections mid-way through a five-year parliamentary term and appointing and firing key officials and judges.

Increasingly, a re-run of the political events of 2015 appears to be underway. The more the Rajapaksas are associated with the current economic distress and the more heavy-handed their response is to any potential or actual discontent (which has so far included the emergency declaration and a violent response to ongoing protests, including the use of tear gas and water cannons and mass arrests of protestors and journalists), the more their ability to marshal enough of the Sinhalese-Buddhist majority – over 70% of the population – comes into question.

The Rajapaksas have lost seemingly impregnable control of party discipline before. Concerns over authoritarianism proved highly distracting and ultimately terminal for the government led by Mahinda Rajapaksa in the phase between reaping the peace dividend from the end of the civil war in 2009 and his defeat in the 2015 presidential election at the hands of a breakaway faction from his own party, led by Maithripala Sirisena. It is not yet clear whether the main challenger to the Rajpapaksas will come from the formal opposition, led by more pluralistically-minded Premadasa, or from one of the defectors from the SLPFA, eg someone like Maitrhipala Sirisena (for the second time, potentially).

If the Rajapaksas have indeed lost their majority, parliament will likely be frozen during today's session. It would be necessary to form a new government within two months, either by forming a new government based on the current parliamentary composition (as advocated by Rajapaksa) or by calling snap elections (as advocated by some opposition parties). Either way, the path forward is highly uncertain. While it is possible that a more technocratic interim government could have an easier time implementing reforms, the timely formation of a new cabinet will be difficult given current disagreements and protestor demands for wider political change.

While default was already inevitable, the political crisis is likely to delay IMF negotiations. Newly appointed finance minister Ali Sabry has already resigned less than 24-hours into the job. While the removal of Basil Rajapaksa from the finance ministry and swift demise of Sabry, a lawyer by training and most recently the justice minister and a key ally of the Rajapaksas, should provide a brighter reform outlook, it leaves vacant one of the key positions for talks with the IMF, which were set to resume in Washington next week and gather steam heading into the IMF's Spring Meetings later this month. The path forward for discussions is now highly uncertain.

Central bank (CBSL) Governor Ajith Nivard Cabraal has also resigned, prompting the MPC decision scheduled for today to be indefinitely postponed. He will be replaced by former CBSL Deputy Governor Nandalal Weerasinghe, who served in the position for a decade before retiring last September. Weerasinghe has so far said all the right things, advocating for tighter monetary policy, the reversal of the 2019 tax cuts, and timely engagement with creditors to restructure Sri Lanka's debt, and worked at the IMF from 2010-12. That said, as the deputy in charge of exchange rate and reserve management during much of Cabraal's flawed tenure at the Bank, he will still have to prove himself to investors.

Still, after Cabraal's disastrous management of Sri Lanka's economy, the change in leadership is sure to be welcomed by investors. Weerasinghe will likely kick off his tenure by hiking rates when the MPC finally convenes. With inflation rising to 18.7% in March versus a 7.5% policy rate, this will be a necessary step to begin reversing Sri Lanka’s excessively loose policy stance (but with 91-day T-bill yields rising to 12.9% the transmission mechanism is largely broken, and reduced monetisation and an upward shift in primary market yields are more important than a symbolic policy rate hike, while a recently failed bond auction suggests longer-term yields need to increase significantly as well).

Overall, policymaking (by the CBSL, at least) is likely to shift in a positive direction once the dust settles. However, in the near term, there is a risk that the political turmoil leads to more populist policymaking as the Rajapaksas try to preserve their hold on power. And while the establishment of an interim government could, in theory, pave the way for reforms, the path forward is highly uncertain and likely to be fraught with obstacles, and the IMF will be circumspect about finalising a programme before a stable government is in place. As such, we think the prospect of reaching an agreement in the coming months is slim. 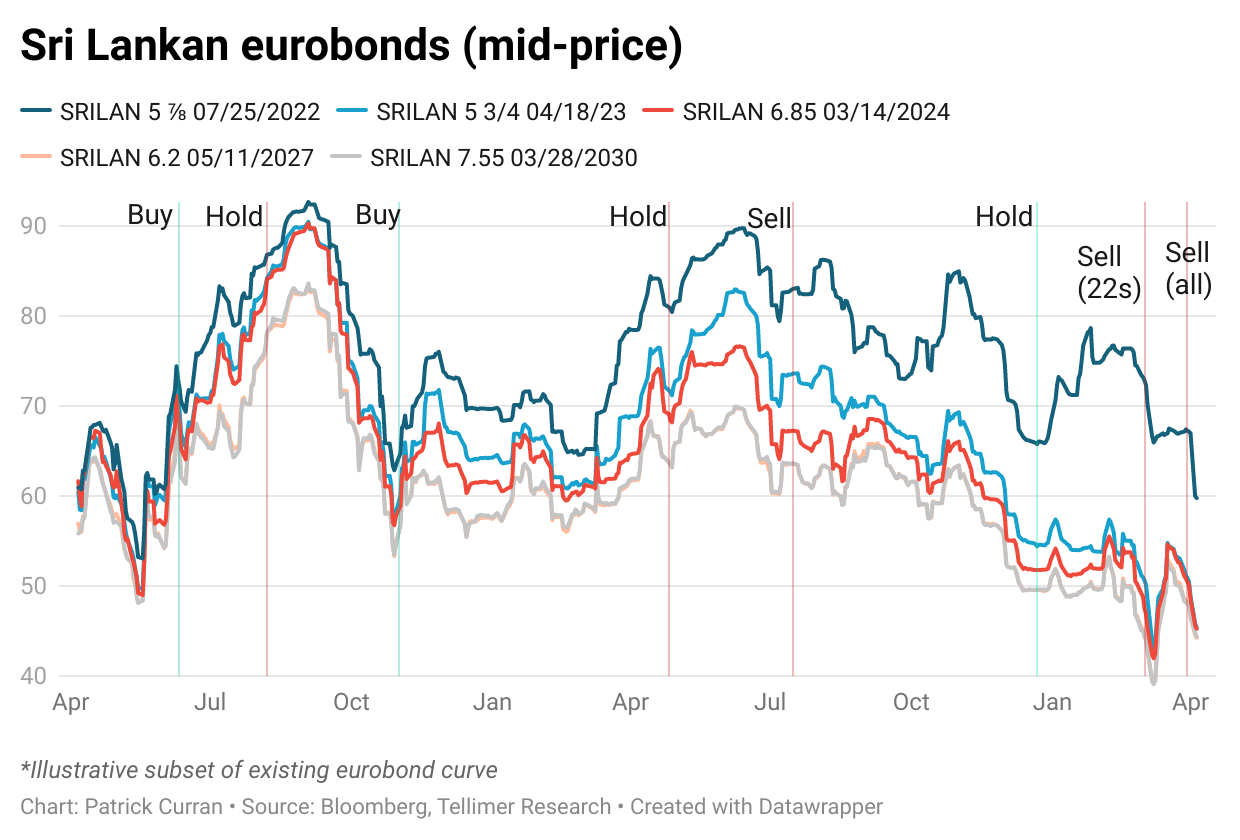 However, IMF negotiations and the formation of a reform and restructuring plan are now likely to be delayed even further. In the meantime, the economic crisis will continue to worsen and investors may not see the eventual recovery plan as credible if government stability is in question. The prospect of broader political and social unrest also increases downside risks, all of which could lead to higher exit yields and lower recovery values.

As such, we think bonds will continue to fall. While the political outlook is highly uncertain, it is unlikely that Sri Lanka is in a position to implement the reforms needed to secure IMF support and stave off a more severe balance of payments crisis in the near term, which will provide an even more onerous starting point for the restructuring when it finally takes place.

We retain our Sell recommendation on Sri Lankan eurobonds at US$45.25 (57% YTM) on a mid-basis for the SRILAN 6.85 03/14/2024s at the time of writing on 5 April on Bloomberg. While there may be some upside in our base case restructuring scenario, bonds will likely have to drop further before higher recovery values can be reached, potentially providing a more attractive entry point in the future.

And equities, of course, remain off limits for foreign investors, who need to support daily or even quarterly potential fund redemptions, because of repatriation hurdles. Clearing those FX issues looks some way off and until then there is no case for allocation of fresh capital, regardless of prevailing valuations.