Since announcing an external debt moratorium earlier in the month, Sri Lanka has moved closer to officially defaulting. The government missed US$78mn of interest payments on its 2023 and 2028 eurobonds on 18 April, kicking off a 30-day grace period after which its default will become official. In response, S&P has downgraded Sri Lanka’s credit rating from CC to Selective Default (SD), and the other agencies will likely soon follow.

Meanwhile, IMF discussions kicked off in earnest during the Spring Meetings last week, with newly appointed Finance Minister Ali Sabry leading a Sri Lankan delegation to Washington DC. The IMF released a statement on 23 April saying that “the Sri Lankan delegation and the IMF team had fruitful technical discussions on the authorities’ request for an IMF-supported programme” and that the IMF “welcomed the authorities plan to engage in a collaborative dialogue with their creditors.”

Neither development is particularly notable, with Sri Lanka now firmly on the restructuring path but with a long road ahead. Foreign Minister G.L. Peiris told reporters last week that it would take about six months to negotiate a full programme, and that in the meantime Sri Lanka was seeking up to US$4bn of bridge financing including US$2.5bn from China, US$1.5bn from India, US$500mn from the World Bank and ADB, further funding from Japan and the GCC, and possible emergency support from the IMF.

However, IMF Mission Chief Masahiro Nozaki seemingly poured cold water on an emergency funding request, saying that any support would be contingent on “adequate assurances that debt sustainability will be restored.” Chinese Ambassador Qi Zhenhong also said that “Sri Lanka going to IMF with a short notice has unavoidably impacted the discussion” on the US$2.5bn of bridge funding, adding that “China has done its best to help Sri Lanka not to default but sadly they went to the IMF and decided to default.”

This raises the spectre of prolonged negotiations, with China seemingly flexing its muscles early in the process. Sabry said last week that Sri Lanka hoped to appoint debt advisors within 15-20 days, but with the finalisation of an IMF programme contingent on sufficient progress towards reaching an understanding with creditors, any reticence by China to take part in the restructuring could delay the process (indeed, this is understood be among the main sources of delays in Zambia and Ethiopia).

Meanwhile, the political backdrop is still highly uncertain. The opposition and protestors have continued to call on the Rajapaksas to step down, and pressure was intensified by the death of a protestor last week when the police used live ammunition to disburse the crowds. In response, President Gotabaya Rajapaksa and the cabinet have both reportedly endorsed constitutional changes aimed at reducing executive powers.

Nonetheless, the opposition and protestors have remained staunch in their insistence that the Rajapaksas must leave politics, with officials from the main opposition party SJB claiming that they have garnered more than the required 113 signatures from lawmakers to introduce a no-confidence vote against the government. If the opposition proceeds, a no-confidence vote could take place as soon as 4 May, and would result in the dissolution of the cabinet led by Prime Minister Mahinda Rajapaksa (although President Rajapaksa would retain the power to appoint a new PM and cabinet).

Any change in government is not likely to change policy towards debt restructuring or engagement with the IMF. At heart, the main opposition parties are less economically populist than the Rajapaksas and their key agenda is addressing the centralisation of power and perceived incompetence, rather than navigating the debt crisis differently (and indeed, creditors would likely view the opposition as a more credible interlocutor). That said, political uncertainty could still delay the restructuring process and IMF talks if it leads to a change in government or, worse, an escalation of social and political unrest.

Bonds have edged up slightly since the debt moratorium was announced, seemingly on relatively positive IMF headlines, but the restructuring process will likely be protracted and, if the political crisis worsens, there could be further downside risks to bonds. 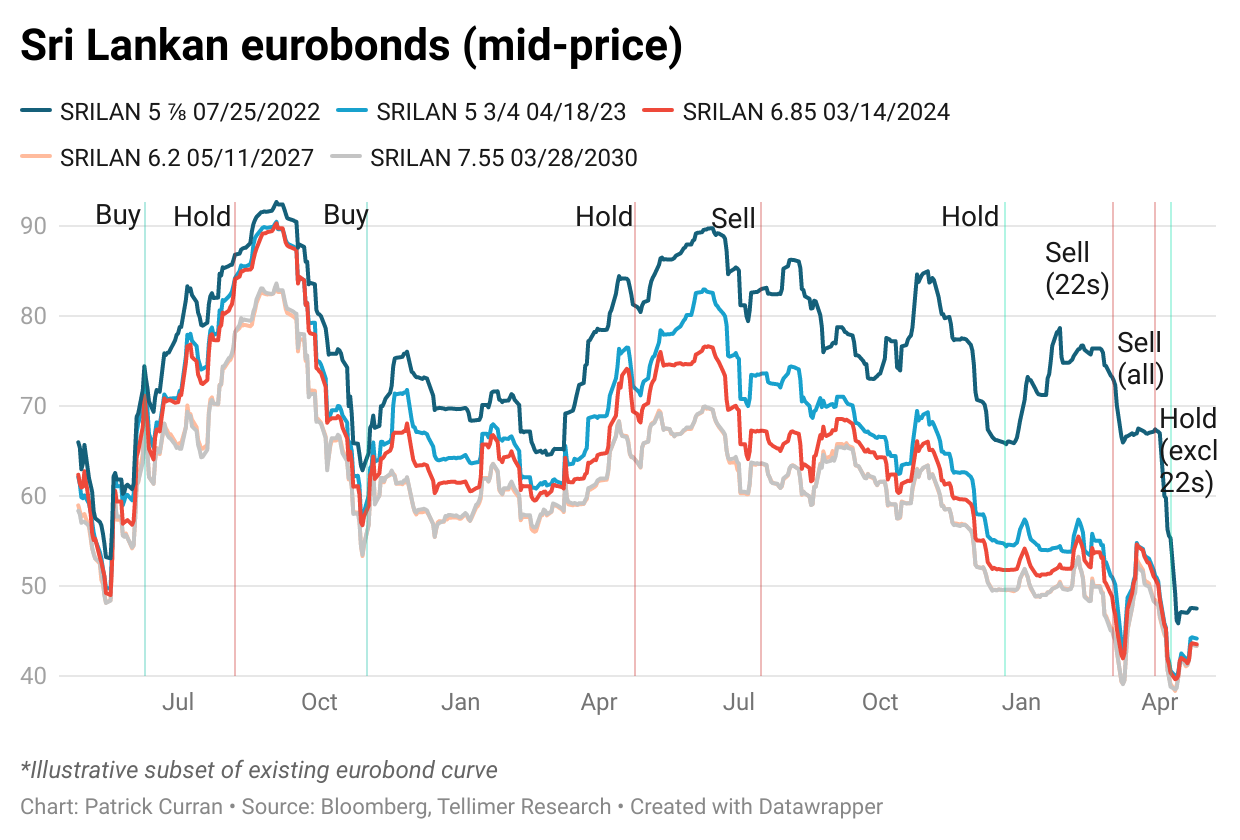 Sri Lanka’s equity market opened yesterday for the first time in two weeks, and has suspended trading shortly after opening for the past two days after circuit breakers were triggered by a sharp drop in stock prices.

Sri Lanka equities remain off-limits for fresh foreign capital as long as FX repatriation hurdles remain in place. While the largest listed corporates are well capitalised, and they have survived economic and political crises before, their time in the investment case will come only after sovereign debt and currency issues are resolved. Equities remain, at best, an inflation hedge for local investors.