We think this confirms our earlier view that a debt restructuring is inevitable even if Sri Lanka secures an IMF programme (see related reading), as it will be unable to credibly place debt on a sustainable path without restructuring (and thus will have to restructure its debt to unlock IMF support, given its policy against lending to countries with an unsustainable debt burden).

In the IMF’s baseline, which is built on favourable interest rate assumptions (7% for as yet unidentified external funding), it sees public debt rising from 119% of GDP in 2021 (including public guarantees and external liabilities of the CBSL) to 125% of GDP by 2026. However, it sees significant downside risks, echoing our concerns that the government’s consolidation plans are built on unrealistic revenue assumptions and unlikely to be achieved without new revenue measures and/or capex cuts.

From a balance of payments (BOP) perspective, reserves would remain at just 1 month of imports even if unidentified financing of US$2-3bn materialised each year from 2022-26, with external debt service projected at a massive US$7-8bn annually over that period. The debt overhang and BOP financing constraints will likely keep growth far below its 3.1-4.1% potential over the medium term.

Further, with the fiscal deficit projected to remain above 9% of GDP in the baseline scenario, and with domestic banks only able to provide an estimated 5% of GDP of financing each year due to already stretched exposure to the sovereign (c40% of bank assets in 2021), the CBSL would likely be forced to continue monetising the deficit moving forward, exacerbating inflationary and currency pressures.

The authorities have already made moves to satisfy the latter policy, devaluing the LKR on 7 March. It has since moved from its previous soft peg of cLKR 200-203/US$ to c292/US$, a devaluation of c31%. This compares to an estimated REER overvaluation of 17% in the Article IV and a parallel market rate of c250/US$ prior to the devaluation, suggesting that the exchange rate has overshot fundamentals.

However, the parallel rate has continued to depreciate to c370/US$ in the weeks since, hinting that the LKR could continue to overshoot. Given the size of the imbalances that had accumulated before the devaluation, this is perhaps unsurprising. And regardless, this will complicate the DSA and require a retooling of assumptions (the 2021 public debt estimate increases from c107% to c127% of GDP when revalued at the new exchange rate, for example).

Friday’s Article IV pours cold water onto the potential upside scenario of Sri Lanka avoiding default with an IMF-backed reform programme, in our view. Indeed, bonds reacted negatively, with the z-spread on the SRILAN 6.85 03/14/2024s widening by 185bps on Monday to 4,587bps. 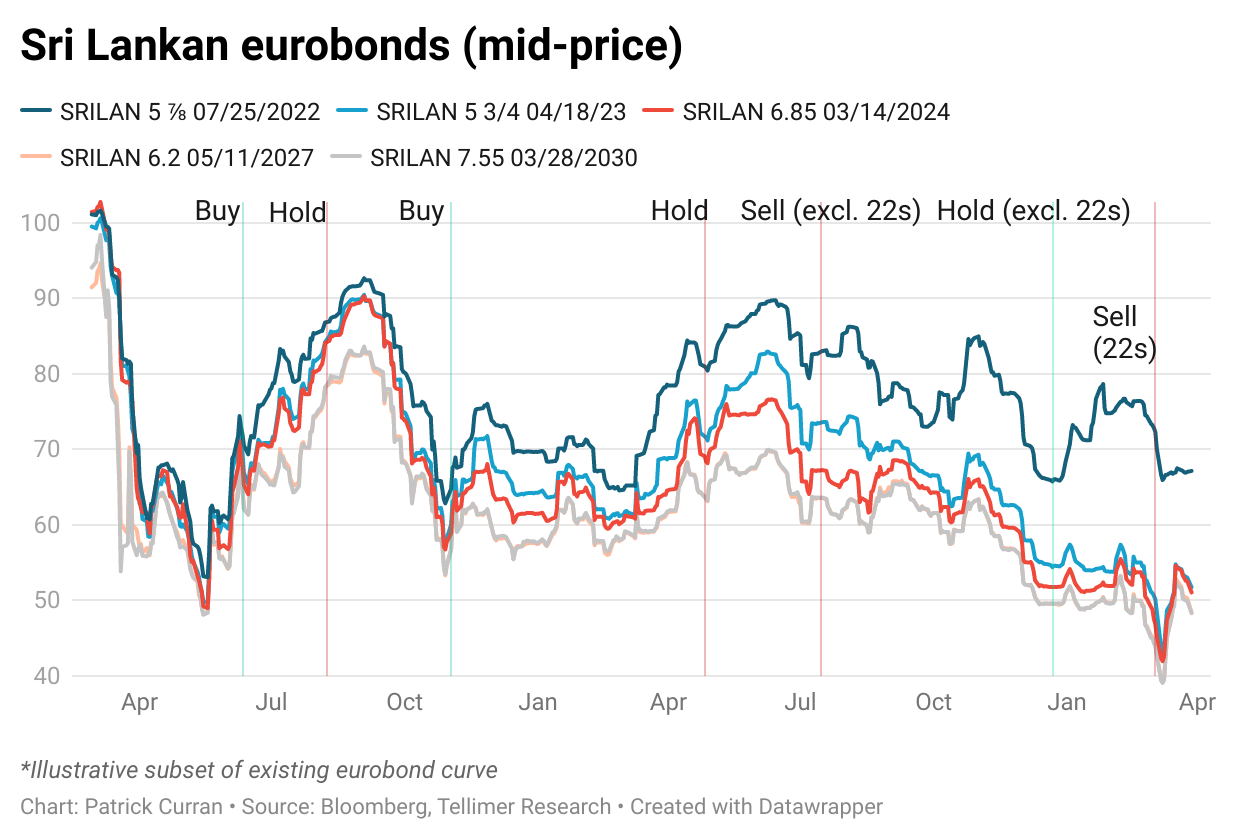 At the time, our base case was built on what we thought an optimistic IMF reform plan would look like, with growth rising to 4% and the primary balance rising to a surplus of 1% of GDP over the medium term. We still think this meshes with an aggressive IMF-backed reform plan based on the Article IV, given 3.1-4.1% potential growth and recommendation for “at a minimum” a zero primary balance by 2024.

However, as the Article IV makes clear, risks are skewed firmly to the downside. The scenario above is likely to be at the very limits of what is politically and economically feasible, and notably more optimistic than the IMF baseline, which sees growth rising to 2.8% and the primary deficit falling to 1.8% of GDP over the medium term. A more aggressive consolidation path will also have a contractionary impact on growth, making it even more difficult to boost growth towards potential.

Our DSA was also based on an LKR 255/US$ exchange rate in 2022, so more debt relief will be required to achieve the same debt reduction goals when the recent depreciation is factored in. Further, the IMF highlighted the risk that contingent liabilities from SOEs, which totalled 15.8% of GDP in 2020 (of which 6.6% is guaranteed), could materialise soon given fuel and electricity prices below cost recovery, which could further boost the debt stock and dilute recovery values.

Lastly, the Article IV underlines important questions about how domestic debt and SLDBs should be treated in a restructuring. As we’ve highlighted, simply haircutting external debt won’t make a very big dent in Sri Lanka’s debt stock and external creditors may push for some domestic burden sharing, but including domestic debt will raise financial stability issues given large sovereign-bank linkages (with 40% of bank assets in government securities, and even more at the two big state lenders).

With a recovery value of US$49-53 based on what appears to be, based on our reading of the Article IV, the most optimistic possible reform scenario, risks are clearly tilted to the downside, with a material possibility that greater NPV relief is required to bring debt to sustainable levels or that exit yields are higher than the assumed 10-12% if reform plans are not seen as credible.

Further, with the Article IV highlighting that the government is still opposed to some of the key IMF recommendations, like the reversal of the 2019 tax cuts, the reform and restructuring process is likely to be a protracted one. Even Zambia, whose new administration enjoyed massive international goodwill after it took over in August, has yet to secure IMF Board approval and make meaningful headway with its restructuring nearly eight months after the new administration took office. And Sri Lanka has a much larger, and likely more diffuse, bond stock and arguably an even more complicated capital structure overall.

Putting it all together, we think that bonds are at the upper end of recovery value and that they could decline further if and when Sri Lanka finally defaults, especially if IMF negotiations are protracted and/or its reform plan is not seen as credible. On the back of the Article IV, we re-run our recovery scenarios from earlier this month but with a re-weighted probability of 60% for our base case and 40% for our worst cast restructuring (versus 75% and 25% previously), and arrive at a fair value of US$43-47 for the SRILAN 6.85 03/14/2024s and US$37-43 for the SRILAN 6.2 05/11/2027s based on exit yields of 10-12%.

We also maintain our Sell recommendation on the SRILAN 5 ⅞ 07/25/2022s at a price of US$67.2. While the government still seems intent on maintaining its unblemished debt service record at whatever cost, and is in the process of trying to secure more funding from India and China to that end, it will be increasingly difficult to justify paying a group of bondholders amid worsening FX shortages and ahead of what is now by nearly all accounts an inevitable default. Bonds are pricing in just a 1/3 probability of default at current prices based on standard recovery assumptions, implying significant downside.