Sri Lanka’s BOP crisis has continued to worsen in recent weeks following the government’s imposition of a food and currency “emergency” at the end of August, giving it the power to impose price controls over certain food items amid worsening FX shortages. This measure joins a growing list of capital and import controls aimed at keeping a lid on LKR depreciation amid rampant money printing by the Central Bank of Sri Lanka (CBSL), including a 100% non-interest bearing cash margin deposit for over 600 “non-essential” imports and moral suasion to coerce banks not to quote the LKR above 203/US$.

Against this backdrop, CBSL Governor Lakshman stepped down on 14 September, three months ahead of his planned retirement, and was replaced by State Minister for Money & Capital Markets Ajith Nivard Cabraal. Cabraal is well-known to markets, having served as CBSL Governor previously from 2006 to 2015 when Sri Lanka made its debut as a regular issuer on the eurobond market and more recently serving as the government’s primary point of contact with investors.

Cabraal has kicked off his term with an eye to stabilising Sri Lanka’s BOP crisis, saying that “I will be concentrating on stability first, then growth.” He has started by promising to remove yield controls on Sri Lanka’s T-bill auctions, which have been in place since April 2020. The CBSL has managed yields at its weekly auctions by rejecting higher bids, leading to a 40% financing gap at auctions since mid-July. 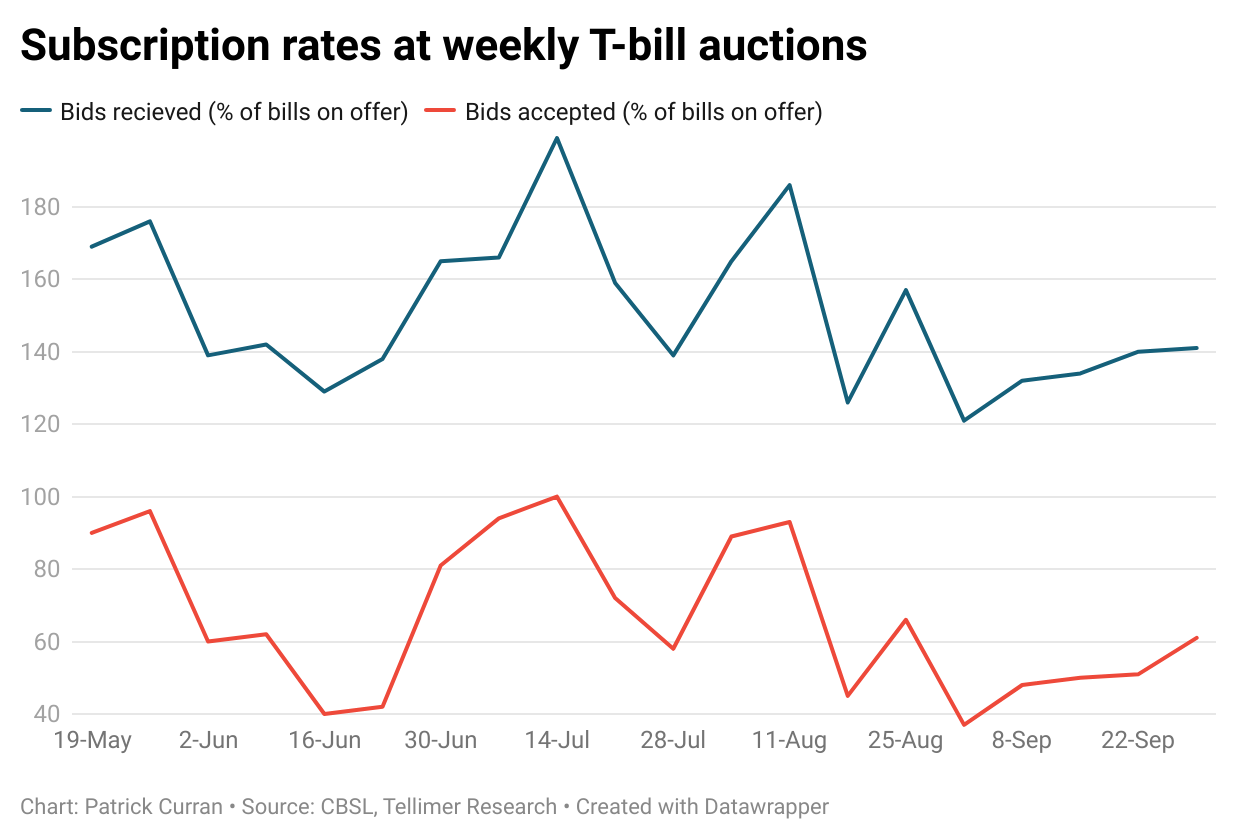 But, while the CBSL allowed 12-month yields to drift higher in recent weeks, rising from 5.32% on 11 August to 7.01% on 29 September, the CBSL still only accepted 40% of bids at the two auctions since the caps were removed (leading to a c45% financing shortfall from the amount on offer). The removal of caps, therefore, appears to be incomplete, and yields will have to be increased further to eliminate financing shortfalls. 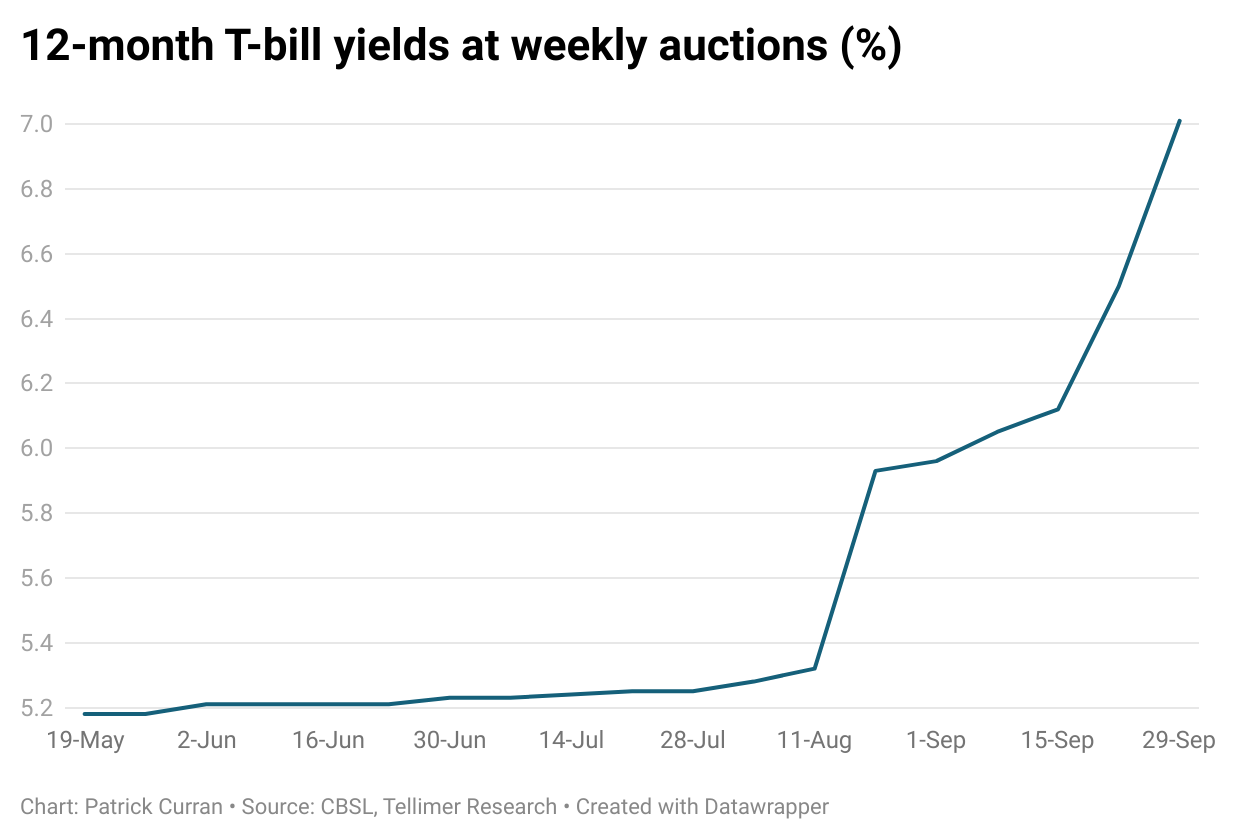 The rate caps have been a key driver of money printing by the CBSL, which has stepped in to plug the financing gap. The CBSL has already monetised LKR549bn (3.4% of projected full-year GDP) of the budget deficit through July, more than the LKR506bn (3.4% of GDP) monetised over the whole of 2020. This has led to excess rupee liquidity in the banking system, exacerbating pressure on the LKR and depleting reserves. In an interview with Bloomberg last week, Cabraal said that “printing money has already happened. My job would be to pull that back, gently without causing any pain to the economy.” 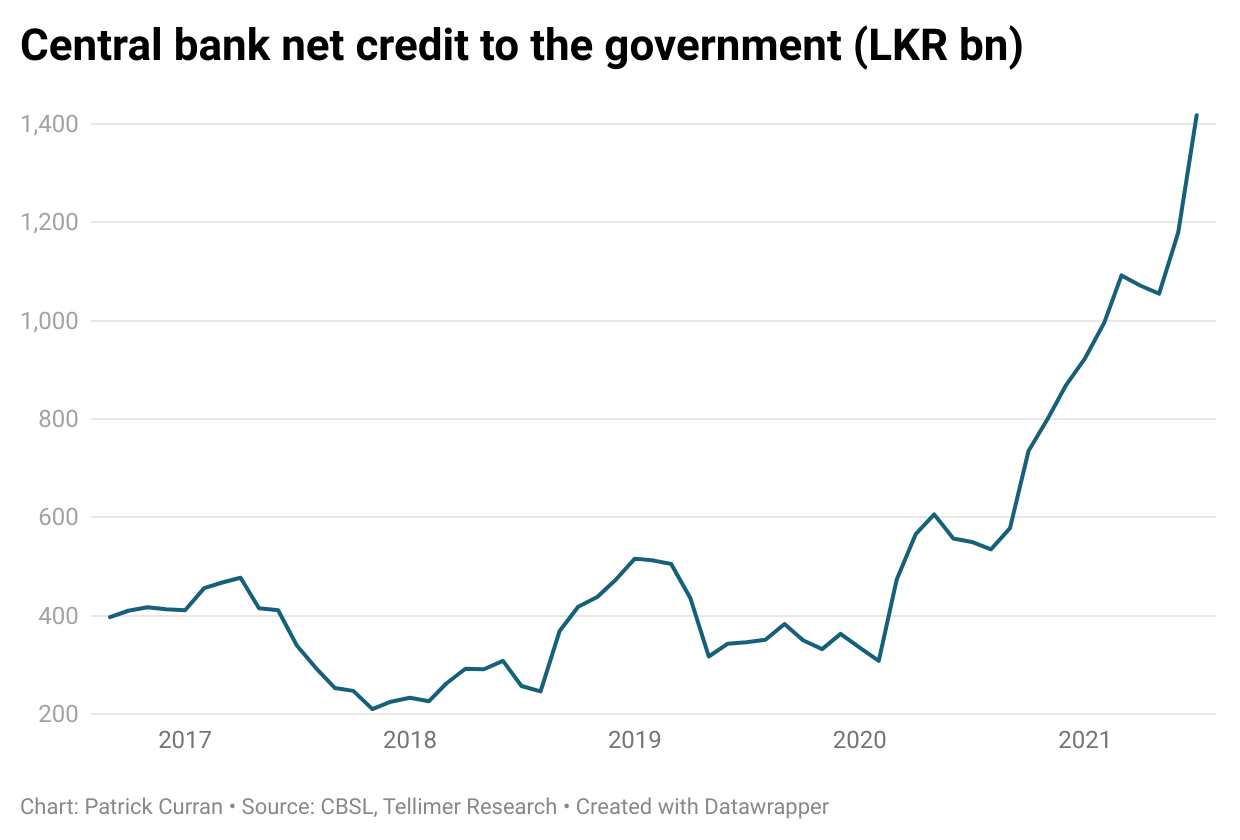 Money printing has exacerbated pressure on the LKR, which the government has continued to peg around 200/US$ even as it trades at levels closer to 230-240/US$ on the parallel market. Instead of allowing the currency to depreciate to ease FX shortages, the government declared a food emergency on 31 August allowing them to impose “fair” prices on key items and send the military onto the streets to prevent hoarding, with lines reportedly forming at supermarkets in Colombo as shelves go empty.

Cabraal has promised a policy reversal on damaging import controls, which are a key driver of the food shortages, saying “we don’t want to keep them for too long”. However, he also seems to be angling for a gradual removal, saying that “we also want to make sure that our rupee stays stable and any additional imports could damage that. That’s a very careful balance that we need to strike.”

We will gain more clarity on the path forward tomorrow, with the CBSL due to announce an interim policy package to deal with the ongoing crisis. Cabraal has also emphasised that the country will continue to service its external debt, saying that “we will pay all the creditors on time like what we have done so far” and that there is “absolutely no risk” of missed payments.

As a possible preview to the CBSL’s policy roadmap, Cabraal recently laid out a plan to stay current on Sri Lanka’s external debt payments, including:

Cabraal also continues to express staunch resistance to the IMF, and has repeatedly emphasised that Sri Lanka has no need to turn to the Fund. He recently told the BBC that “there is no need for Sri Lanka to go to the IMF and thereby cause unnecessary pain to its lenders and investors.” This implies that Cabraal thinks the IMF will require Sri Lanka to restructure its debt as a precondition of its programme, a risk we have previously highlighted given Sri Lanka’s unsustainable debt stock.

However, we still think an IMF programme is the only possible way for Sri Lanka to avoid default beyond its January 2022 eurobond maturity. Sri Lanka’s reserves have jumped from US$2.8bn to US$3.55bn in August on the back of the IMF’s US$787mn SDR allocation, but ultimately Sri Lanka’s plan to paper over its BOP cracks with one-off bilateral financing will only kick the can down the road without a substantial consolidation of its budget deficit to reduce money printing and imports. 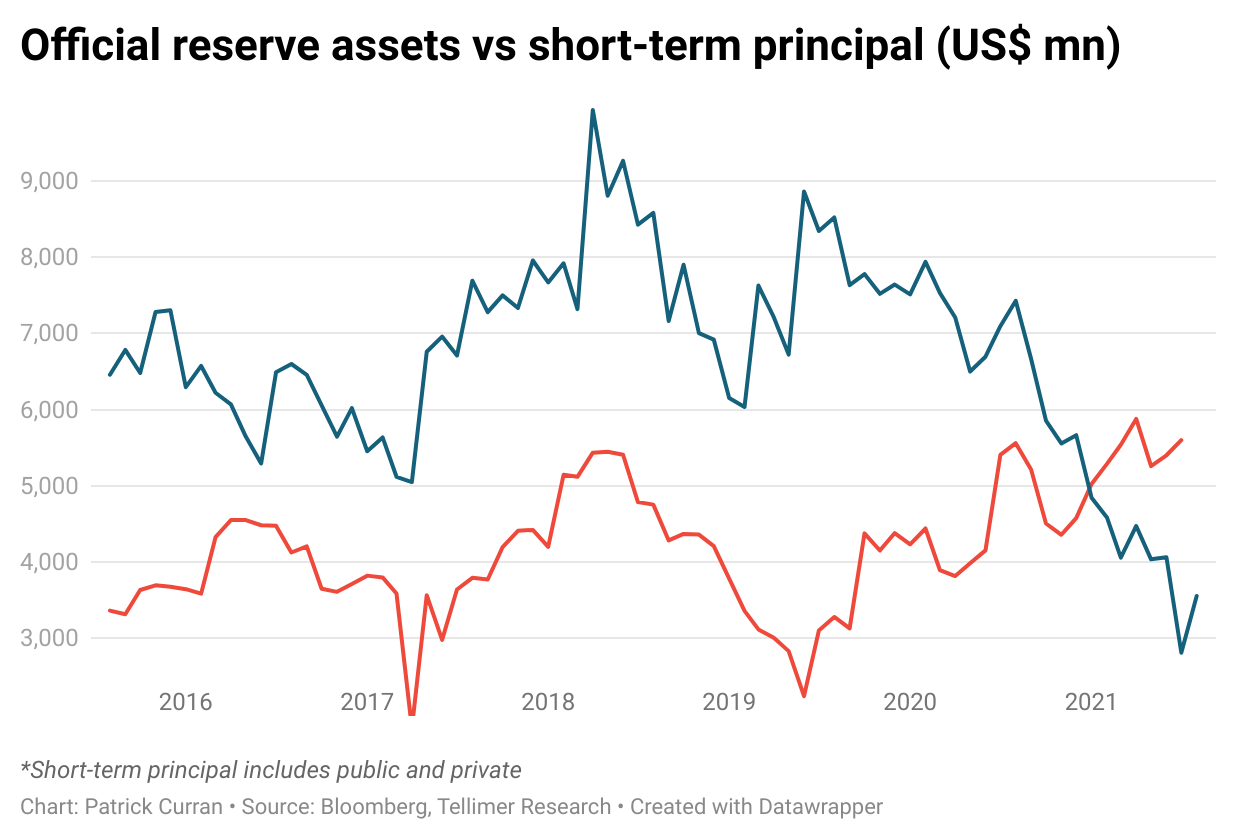 Consequently, Sri Lanka’s BOP shows no sign of improving, with its trade deficit widening to US$4.9bn ytd through July versus US$3.5bn at the same time last year amid a 24% yoy rise in exports and 31% rise in imports (driven by rising commodity prices and the expansionary fiscal stance). Remittance growth, a major tailwind for the BOP in 2020, has also turned negative, falling 3% yoy through August after contracting by 29% yoy over the past three months.

Without an IMF programme and market access, Sri Lanka’s financing plans are looking increasingly tenuous. Having relied heavily on bilateral lending and swaps to boost reserves post-Covid, Cabraal claims that it is in talks for another US$1bn of bilateral financing. But the headlines are starting to reek of desperation, with the MoF reportedly sending RFPs to foreign banks for FX-denominated loans with maturities of 1-year or more to boost reserves and talks reportedly ongoing for a credit line from New Zealand to purchase dairy products amid shortages of both FX and dairy.

While Cabraal has so far begun to move policy in the right direction by aiming to reduce monetisation of the deficit and import controls, and has continued to express a high willingness to pay the eurobonds, we are not convinced that the government is ready to do what is needed to stem Sri Lanka’s worsening BOP crisis. Tomorrow’s announcement of the CBSL’s reform agenda will be an important signpost, but if the 2022 budget fails to outline meaningful plans for consolidation in November, and if Sri Lanka continues to prefer stopgap measures to plug its BOP gap rather than commit to an IMF programme, we think default is inevitable beyond its January 2022 maturity (which at this point is a tossup).

Bond prices have come down since we downgraded the eurobond curve to Sell on 15 July (excluding the SRILAN 6.25% 2021s, which were successfully retired at the end of July, and the SRILAN 5.75% 2022s, which mature in January and which we have stayed agnostic on), with the SRILAN 6.85% 2024s falling by 4.4% over that period and 6.2% since early September. The one exception is the SRILAN 5.75% 2022s, which are down just 3.1% since mid-July but have rebounded by 6.4% over the past week on Cabraal’s comments that there is a refinancing plan in the works, and now trade at 90 cents on the dollar. 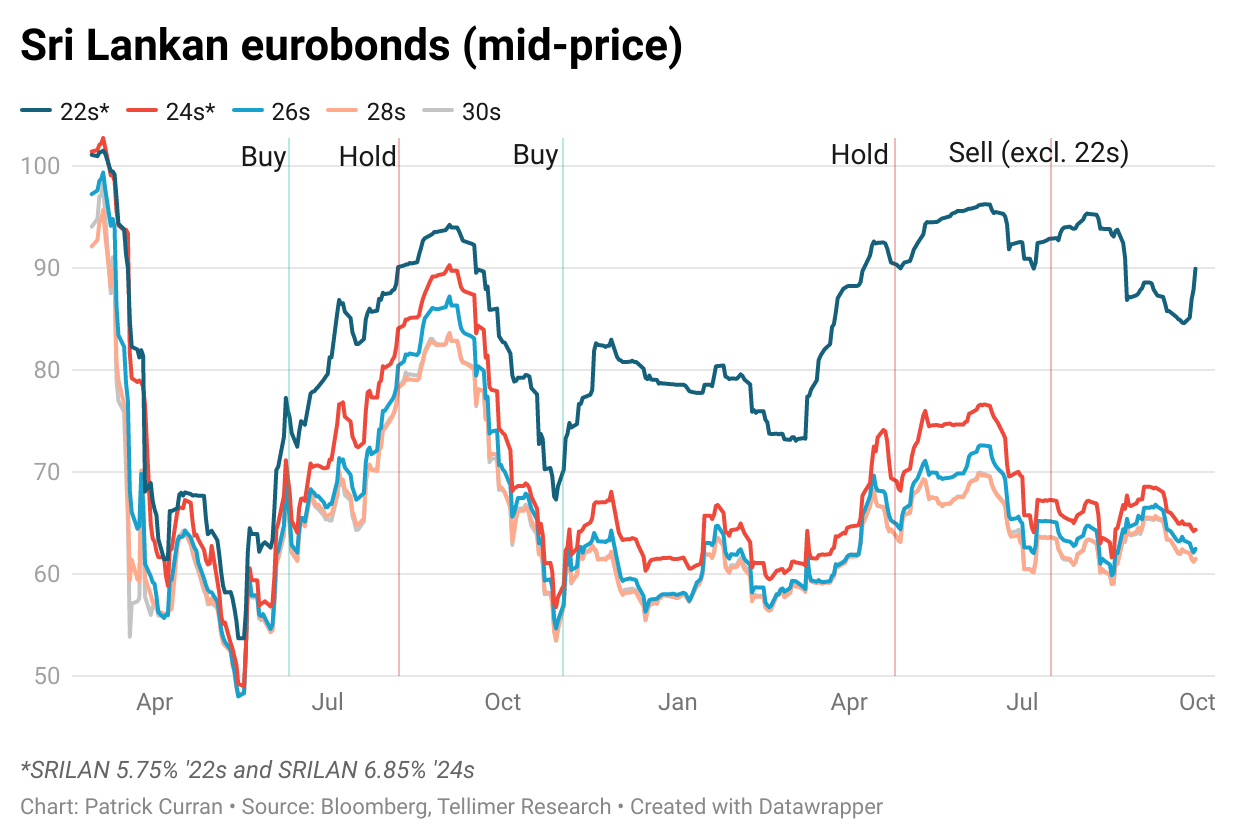 We maintain our Sell recommendation on Sri Lanka’s eurobonds beyond the January 2022 tenor, and will consider reviewing our recommendation when the SRILAN 6.85% 2024s get closer to our price target of US$60.