We recently highlighted the growing reliance on monetisation to finance Sri Lanka’s budget deficit amid endemically undersubscribed government debt auctions, and the pressure this has put on Sri Lanka’s balance of payments and plummeting FX reserves (an updated reserve figure for October could be released later today in the CBSL's weekly bulletin). In the month since, there has been good and bad and news on this topic.

First, the bad. This week’s money supply data shows a sharp rise in net Central Bank of Sri Lanka (CBSL) credit to the government in September, rising from LKR1.53tn to LKR1.83tn on the month. Year-to-date, net CBSL credit to the government has reached LKR962bn (5.9% of projected full-year GDP), exceeding last year’s LKR506bn (3.4% of GDP) with one quarter still left to go in the year. This has helped fuel a rise in inflation, from 5.7% to 7.6% in October (above the 6.1% Bloomberg consensus).

That said, the higher-frequency daily data on CBSL bill and bond holdings lists a much lower LKR1.47tn on 3 November. Unless the government has drawn down deposits at the CBSL, it’s not clear what is driving the discrepancy, so we take the data with a grain of salt. 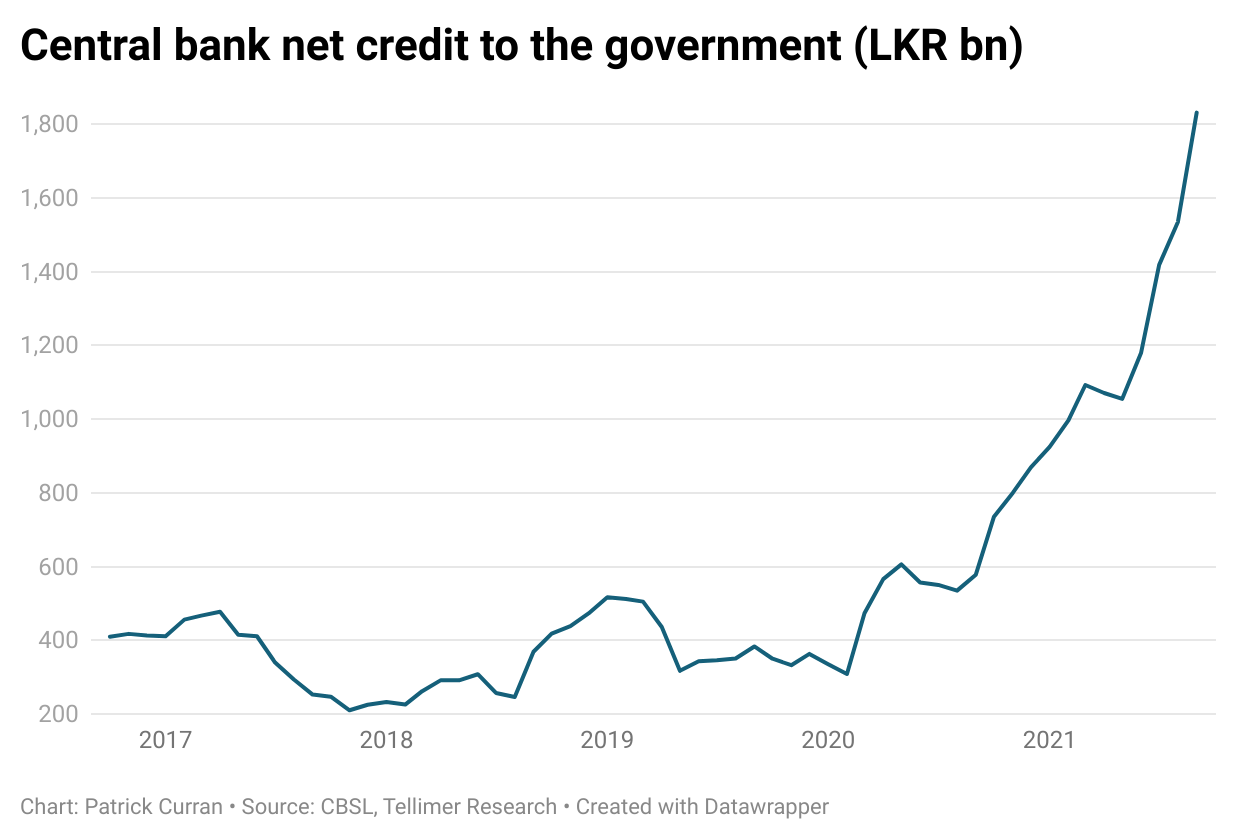 Next, the good. After yield caps were removed at Treasury auctions in September, yields continued to drift higher, with the one-year T-bill yield now sitting 300bps above where it did at the end of July. As a result, demand for government debt has increased and the last three T-bill auctions have now been fully subscribed.

This means that, after September’s money printing spree, monetisation by the CBSL likely slowed considerably in October (although Nikkei Asia claims the CBSL printed another LKR130bn in October, without saying where it got the data). But it is worth noting that this improvement has come at the cost of higher interest rates, which will increase Sri Lanka’s already large debt service bill (with interest absorbing 70% of government revenue in H1 21). 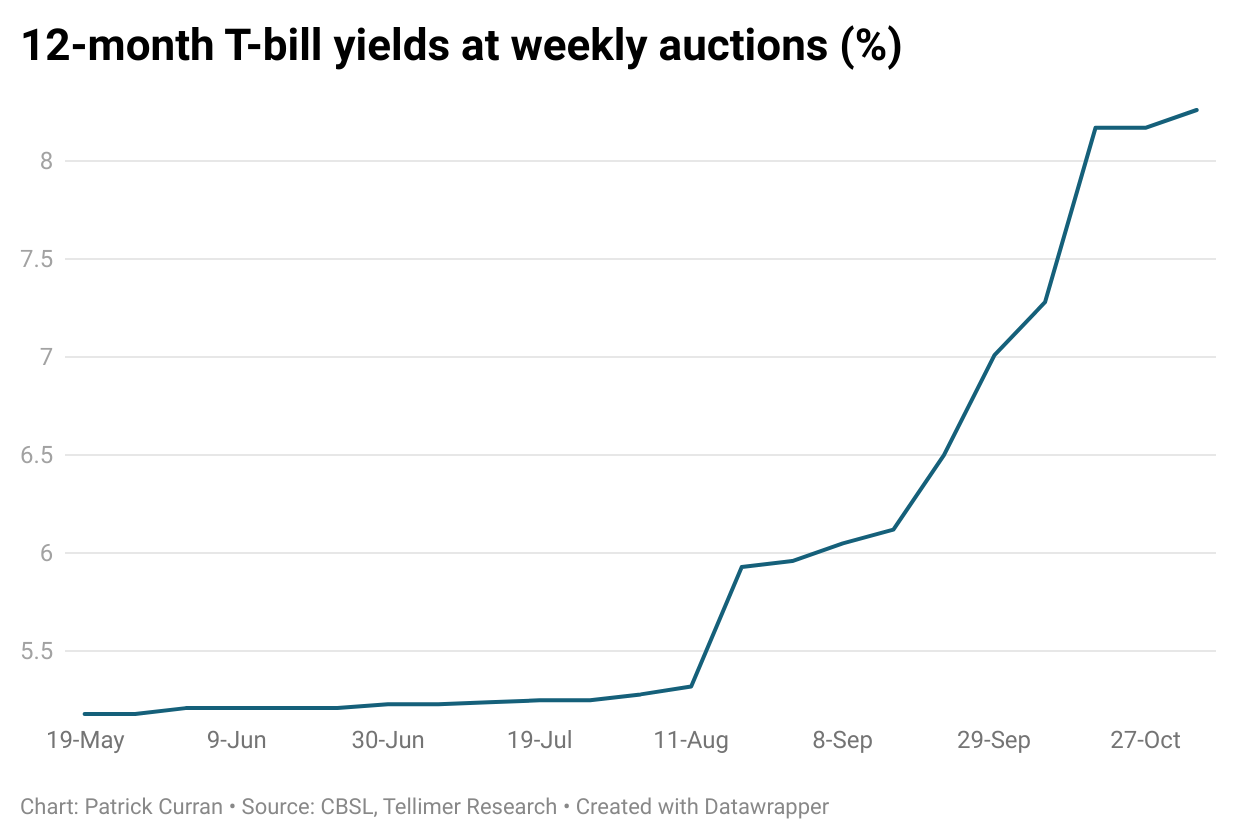 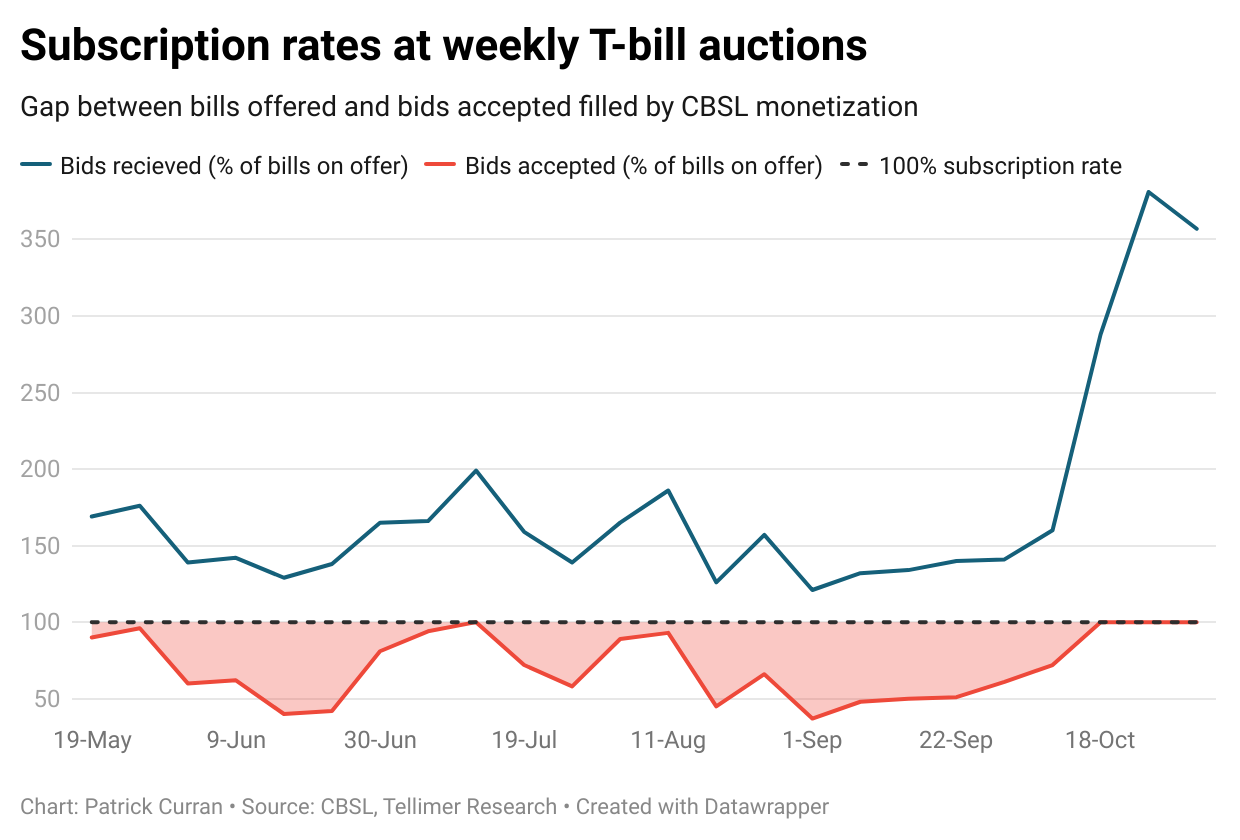 Besides the removal of yield caps, there have been several other positive policy shifts. The government decided to abandon price controls (which were creating shortages of key goods), lifted the ban on fertiliser imports that had been in place for six months and threatened to decimate its crop yields, and established a department at the central bank to streamline remittance inflows to the country.

On the less positive front, the CBSL has also issued new rules on the conversion of export proceeds, doubling down on capital controls that have been essential to stave off a balance of payments (BOP) crisis amid rapid money printing but that have likely weighed on investment and exacerbated FX shortages.

There have also been announcements of potential new financing, with the government agreeing on a US$3.6bn credit line with Oman to finance oil purchases for a period of one year. The government has also announced that it is in the process of finalising another US$1.5bn long-term loan from a foreign government-affiliated agency and FX swap arrangements from the Reserve Bank of India, the People's Bank of China and Middle Eastern central banks, that it expects US$250mn from the sale of an LNG power plant by year-end, and that the state-run Ceylon Petroleum Corporation is expecting another US$500mn credit line for oil from India’s Exim Bank.

These announcements have sparked a rally in Sri Lankan eurobonds, which have risen by c5pts across the curve since mid-October (or nearly 10pts in the case of the SRILAN 5 ⅞ 07/25/2022s). 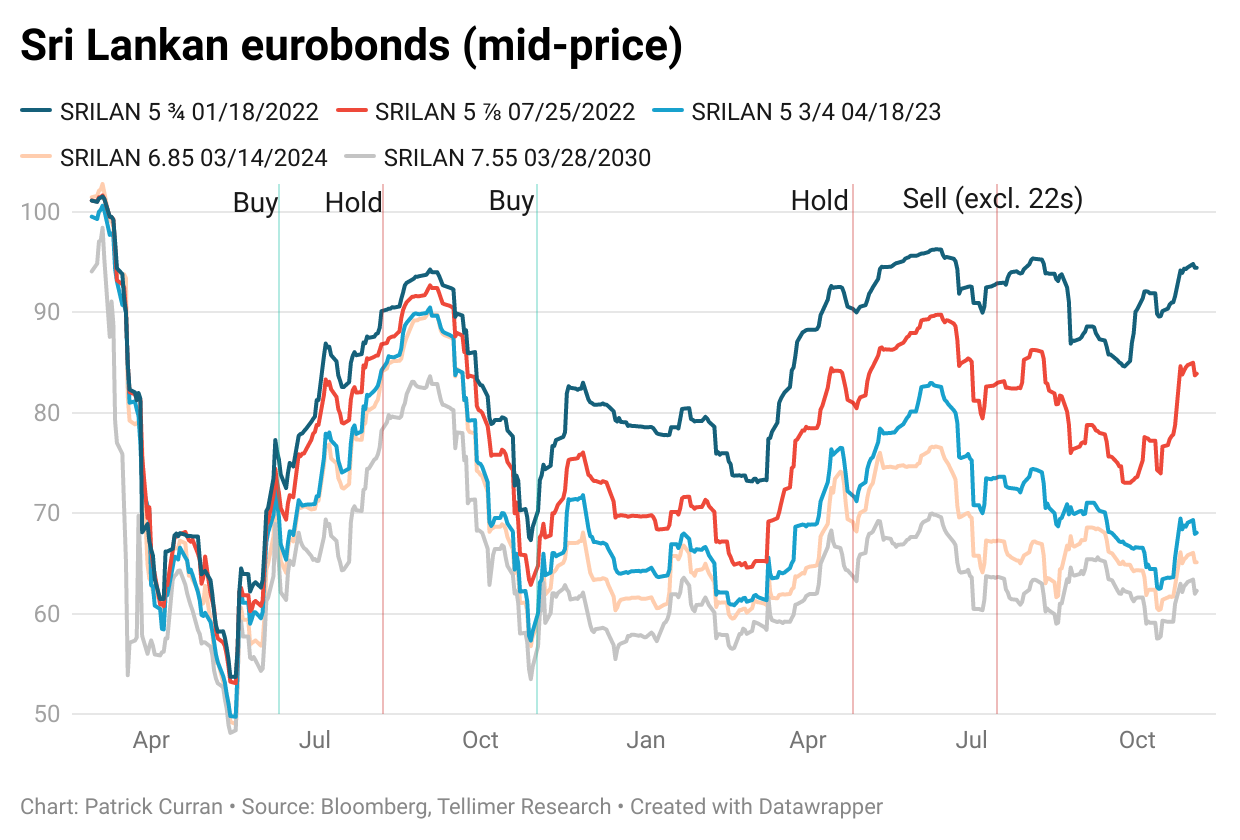 Although the new financing should help reduce Sri Lanka’s external financing gap in the near term if it materialises, we think the positive market reaction is overdone. First, it is merely a continuation of Sri Lanka’s reliance on ad hoc bilateral funding to plug its external financing gap, which simply kicks the can down the road without aggressive fiscal consolidation and an IMF programme to provide a credible backstop. Indeed, this sentiment was expressed by Moody’s in its recent decision to downgrade Sri Lanka’s credit rating by one notch to Caa2 (stable outlook), saying that “A large financing envelope that Moody’s considers to be secure remains elusive and the sovereign continues to rely on piecemeal funding such as swap lines and bilateral loans.”

We continue to believe that Sri Lanka will find a way to pay its US$500mn eurobond in January 2022, and are agnostic on its ability to meet the US$1bn maturity in July 2022, but still think that default is inevitable beyond mid-2022 without a major policy shift. It is certainly true that new financing increases the likelihood that both of the 2022s will be paid. Indeed, the CBSL abandoned plans to buy back its 2022 eurobonds due to an inability to source bonds at the quoted prices, suggesting that investors are increasingly confident that the 2022s will be paid in full at maturity. But with the January 22s trading above US$94 and the July 22s trading near US$84, this is increasingly priced in and leaves little insulation from losses if Sri Lanka is unable to pay.

In addition, the positive short-term impact of the new financing is also overstated. The US$3.6bn credit line from Oman sounds large, but this type of oil financing facility is generally limited to funding imports from the creditor country, which totalled less than US$200mn in 2020 and have never exceeded US$800mn. That means that unless Sri Lanka shifts a sizeable portion of its oil imports to Oman, much of the facility will go undrawn.

The eurobond rally further down the curve is also a bit perplexing, as taking on more external debt without a policy adjustment will, if anything, lead to higher haircuts if and when Sri Lanka does default, and should therefore lead to reduced recovery values (the IMF sees debt stabilising around 110% of GDP over the medium term, even assuming substantial fiscal consolidation).

On balance, the sharp rise in monetisation in September is concerning but is offset by the more favourable financing conditions after the removal of yield caps, which should lead to reduced monetisation over the last few months of 2021. And while the new financing facilities increase the chance of short-term debt being paid, we think that default is still inevitable beyond mid-2022 without a major policy shift.