Sri Lankan eurobonds have rallied sharply as the government sheds its opposition to an IMF programme, with President Gotabaya Rajapaksa confirming in a speech on Wednesday (full transcript here) that “Subsequent to my discussions with the International Monetary Fund, I have decided to work with them after examining the advantages and disadvantages.”

Subsequently, IMF spokesman Gerry Rice confirmed that the IMF is “ready to discuss all options for Sri Lanka” and the authorities have “indicated they are actively considering” a programme. He added that IMF staff had “candid and fruitful” discussions with authorities during a visit to Colombo on 14-15 March, and further discussions would be held during the finance minister’s visit to Washington in April.

In addition, Sri Lanka and India finalised the US$1bn credit facility that the government had long touted during a visit by Finance Minister Basil Rajapaksa to New Delhi on Thursday, which will provide trade credit for the import of essential goods, like food and medicine. While not strictly fungible for debt service payments, this will help ease Sri Lanka’s external funding constraints. 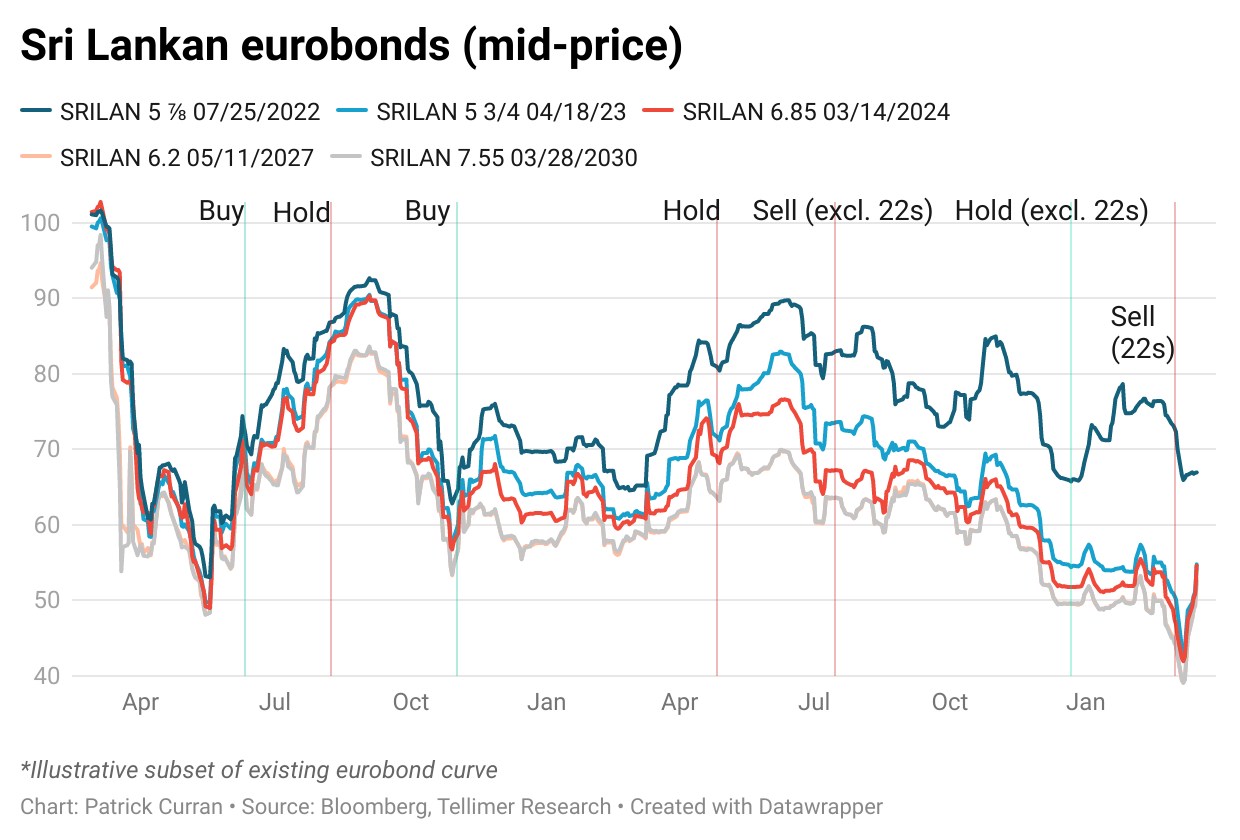 In President Rajapaksa’s speech, he said that the recent devaluation of LKR would narrow the external funding gap to US$2.4bn in 2022 from an earlier estimate of US$9.4bn due to lower imports and higher exports, service receipts and remittances, which he now hopes to plug with support from the IMF as well as other international financial institutions and “friendly countries” (see here for our own estimate of external funding sources and uses).

Through discussions with these partners, Rajapaksa “hope[s] to find a way to pay off our annual loan instalments, sovereign bonds, and so on". However, as we wrote last week, we believe it is too late to avoid restructuring of Sri Lanka’s external debt, which the IMF said in a press release after its recent Article IV consultations “has risen to unsustainable levels”.

However, that Sri Lanka has proactively reached out to the IMF before defaulting should improve recovery values by generating more credible reform buy-in and lowering exit yields, as compared with the alternative of crawling to the IMF for funds only after the default has occurred and having to negotiate a reform programme from square one (which may be viewed as 'imposed' rather than 'home-grown' reforms).

Our recovery analysis last week estimated a recovery valued for the SRILAN 6.85 03/14/2024s of cUS$49-53, based on exit yields of 10-12% in our base case or US$30-35 in our worst case. The government’s turn to the IMF reduces the probability of the worst-case restructuring, and could result in exit yields below our 10-12% estimate, providing some upside to our recovery values.

The decision to float LKR rather than re-pegging it at a lower rate, as initially thought, is also a positive demonstration of a renewed commitment to reforms and will reduce external pressures, as posited by President Rajapaksa (most immediately via higher remittances, with a more gradual impact on imports and exports). LKR has moved from 201.5/US$ to 265/US$, a 24% devaluation and beyond the 255/US$ that prevailed in the parallel market before the peg was broken (but below the 305/US$ that prevails now).

That said, there is still a long way to go before an IMF programme can be finalised, especially if there is disagreement between the Fund and authorities on the need for restructuring or composition of reforms (with the IMF likely to insist on a steep revenue-based consolidation, which may be tough for the Rajapaksa administration credibly to commit to). As such, the positive market reaction could be a bit premature.

With the SRILAN 6.85 03/14/2024s trading at US$54.6 at cob on 17 March on Bloomberg, bonds are trading slightly above our base case recovery value (which implies a 9.5% exit yield at the current price). Against this backdrop, we maintain our Sell recommendation on the SRILAN 5 ⅞ 07/25/2022s and Hold recommendation on the rest of the eurobond curve.