On 5 August, Sri Lankans went to the polls to elect a new parliament, with the ruling SLPP winning 145 out of 225 seats amid 71% turnout (slightly below 75% in 2015). The SLPP can reportedly rely on the support of several small allied parties to muster five additional seats to give them the two-thirds supermajority needed to reverse the 2015 constitutional amendment limiting the powers of the president and imposing term limits.

President Gotabaya Rajapaksa’s brother Mahinda (who served as president from 2005-15) will likely be appointed prime minister, tightening the family’s grip on Sri Lankan politics. The supermajority may lead to more authoritarianism, centralisation of power, erosion of the independence institutions (ie judiciary, central bank), emphasis on security and marginalisation of minorities (which, in turn, may raise the medium-term risk of violence from disenfranchised elements of society).

The elections are said to have taken place amid a climate of fear, with 10 international rights groups (including Amnesty International, Human Rights Watch and Reporters Without Borders) calling on the government to "end the targeted arrests, intimidation and threats against the lives and physical security of lawyers, activists, human rights defenders and journalists" ahead of Wednesday’s poll.

Looking at the economic implications, however, we don’t expect the election to materially impact the prospects of the repayment of Sri Lanka’s US$1bn eurobond maturing this October. Willingness to pay remains high and reserves have stabilised since May, with the drop in imports more than offsetting the decline in tourism and remittances. The government has also secured some additional financing from the Fed and Reserve Bank of India, helping to ease liquidity constraints.

Beyond that, the question is whether the government can consolidate the budget and stabilise debt over the medium term. The election impact on this is unclear – on the one hand, an increased Rajapaksa majority will give them a stronger mandate to pursue needed reforms and agree to an IMF program. On the other, it will give them a stronger mandate to pursue their preferred policy agenda, which in the past has included pro-growth measures, such as tax cuts and public investments that widen the deficit.

The victory will also add impetus to Gotabaya’s plans to “restore relations” with China, with booming Chinese investment boosting growth during his brother’s presidency but also leaving Sri Lanka with an unsustainable debt burden (which, among other things, forced Sri Lanka to controversially lease back the US$1bn Hambantota Port to China after it was unable to continue servicing its debt).

We await the 2021 budget (likely in October or November) for indications on which way Sri Lanka is leaning. This will be the first important signpost of whether the new government is willing to commit to fiscal consolidation, without which an IMF program is unlikely due to concerns over debt sustainability.

For now, it will probably be seen as positive simply that the elections have been concluded and that IMF negotiations can begin in earnest, but there’s no guarantee they will secure a program. Bonds would likely jump on news of a program, but it is equally possible that the upcoming budget will be passed without the requisite reforms. This would quell hopes of debt stabilisation and an IMF program and cause the bonds to give back some of their recent gains.

Our view on the bonds is that the risks are evenly balanced. The SRILAN 6.85% 24s have rallied c21% since we initiated our ‘Buy’ recommendation on 10 June (vs. c5% on the EMBI total return index), and, at a mid-price of 85.8, have passed our target of 80 cents on the dollar (see here). That said, short-term liquidity constraints have eased and the chance of an IMF program is higher with elections in the rear-view mirror, which would be a catalyst for further appreciation. 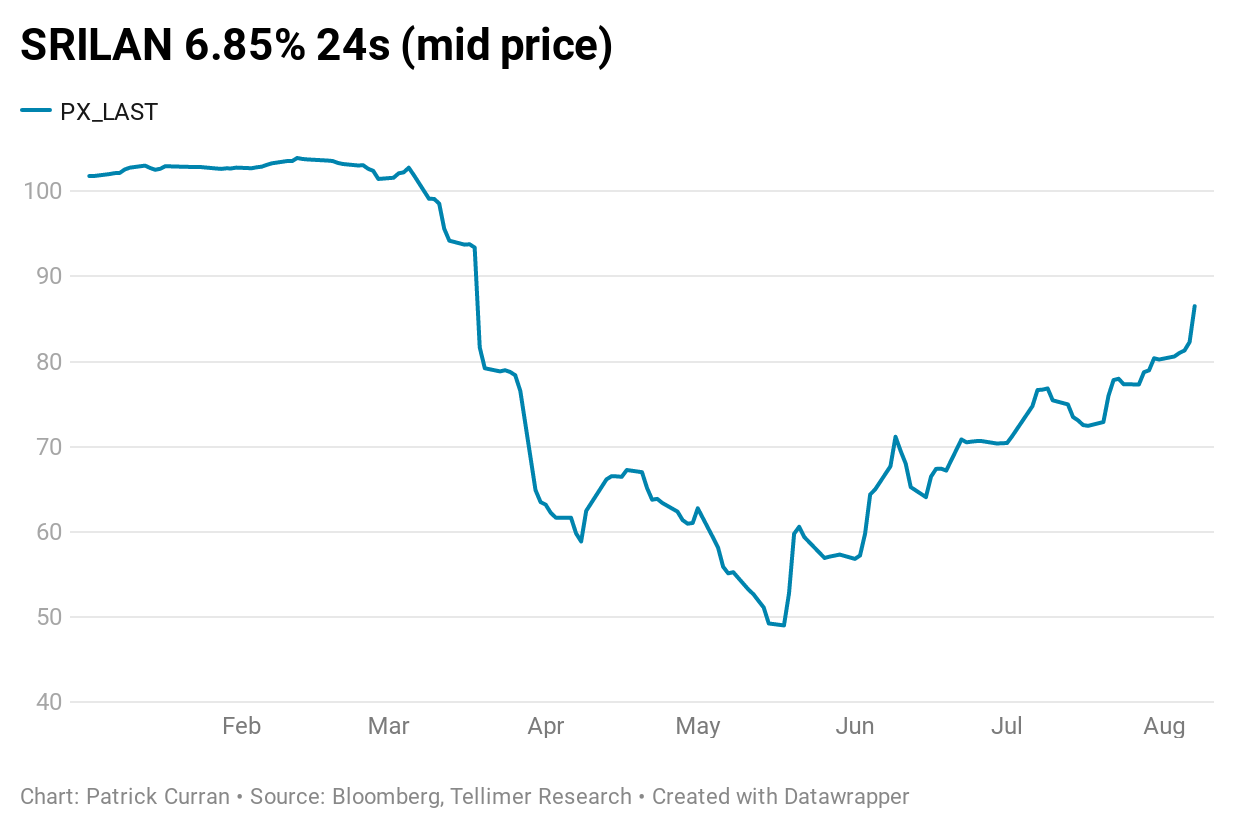 We think this week's rally means the good news is largely priced in and therefore downgrade from Buy to Hold.

With bonds pricing a haircut of c10% (or a c20% probability of default assuming a 50% haircut), further upside is limited. However, Sri Lankan eurobonds still yield among the highest in EM and are attractive on a relative basis, with potential near-term catalysts for further gains.

From that perspective, less risk-averse investors may prefer to hold on a bit longer to reap further gains in the event an IMF program is successfully closed.

In the following section of the report, we outline what has changed fundamentally since our last update and assess the balance of economic risk factors.

Sri Lanka’s recent outperformance can likely be attributed to positive announcements on financing, with Sri Lanka formally signing the anticipated US$400mn swap line with India (with another US$1.1bn still under negotiation) and announcing a potential US$1bn repo facility with the NY Fed on 6 July. The swap line with India will remain open until November 2022.

In parallel with discussions on the swap line, there were also “technical discussions” on rescheduling Sri Lanka’s outstanding debt repayments to India (total stock is US$960m). While a final decision is yet to be taken, a follow-up is expected soon. Along with an outstanding request for debt relief from China, these requests have been known, but it is positive that at least one of them seems to be moving forward.

Treasury Secretary Attygalle on July 8 reiterated Sri Lanka’s commitment to pay foreign debt and confidence in their ability to meet all obligations, including the US$1bn eurobond maturity this October. He added that Sri Lanka was making good progress on IMF negotiations and that lenders would provide an additional US$1bn of budget support alongside the program (including US$300m from the ADB and undisclosed amounts from France, the AIIB and the World Bank).

Sri Lanka is also expecting the balance of a US$1.2bn loan from the China Development Bank being disbursed in the second half of the year, and has reportedly received a “very good response” from potential bidders in regards to a US$500m term financing facility.

Together, this should ease external liquidity constrains over the next 6-12 months. After falling from US$7.9bn in February to US$6.5bn in May, reserves have rebounded to US$6.7bn (in June). This has been partially supported by a 5.5% yoy decline in the trade deficit, with a 26.1% drop in exports offset by a 16.1% drop in imports amid government restrictions.

Tourist arrivals are down 49.7% yoy through first half of the year, and, while airports were slated to reopen to foreign visitors in August, a recent spike in Covid cases from a drug rehabilitation center in the north of the country has prompted a delay until early September. In contrast, remittances have held up relatively well, with an 8.9% decline in the first half of the year but increasing 6.7% yoy in June.

The central bank has also extended restrictions on the repatriation of funds from capital transactions through year-end in a bid to preserve its FX reserve position. In aggregate, while the balance of payments outlook remains delicate, it appears the major risks are contained and Sri Lanka should be able to continue weathering the storm (although with greater constraints to growth – which the ADB now expects to contract by 6.1% this year after a 1.6%y/y contraction in Q1 – due to import and capital controls).

With debt increasing from 89.4% at the end of 2019 to an estimated 93% of GDP in Q1 (47.9% domestic and 45.1% external, excluding c5.2% of guaranteed and c9.4% of non-guaranteed contingent liabilities), fiscal consolidation is still of the utmost importance to avoid default beyond the 6-12 month horizon. 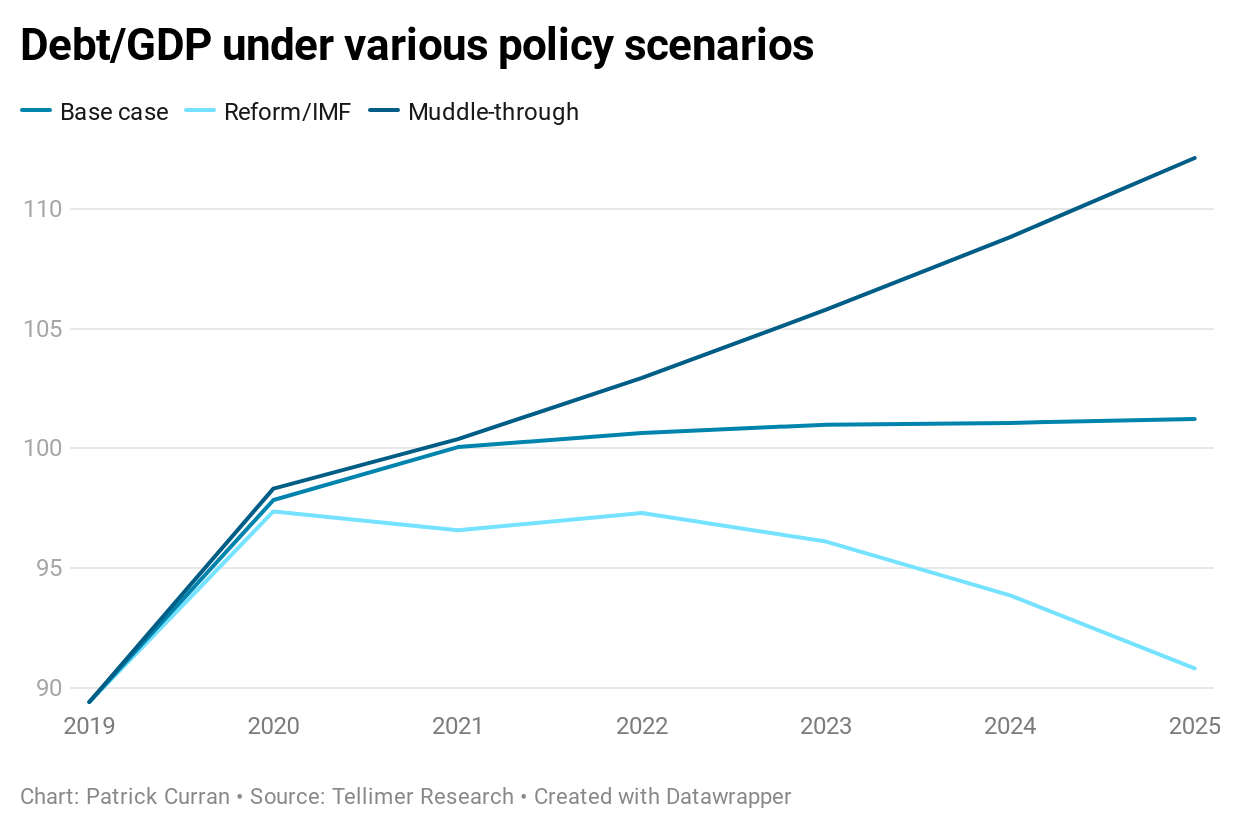 With a debt-stabilising primary surplus of c0.2% of GDP by our estimates, and US$5.2bn of external debt maturing over the 12 months from June (vs. US$6.7bn of reserves), the government needs to swiftly implement consolidation measures totalling an ambitious c3.5% of GDP. This will likely include the reversal of tax cuts implemented last November, and would exacerbate an already grim growth outlook.

Downgrade from ‘Buy’ to ‘Hold’, but there are still potential catalysts for appreciation

Using a similar approach to our 10 June report, we present a number of potential scenarios to value the SRILAN 6.85% 24s. With the risk of default having decreased in recent months and the major obstacle to an IMF program (elections) removed, set against the risk that the Rajapaksa’s use their strengthened mandate to implement expansionary fiscal policy, we see the bonds as fairly valued. 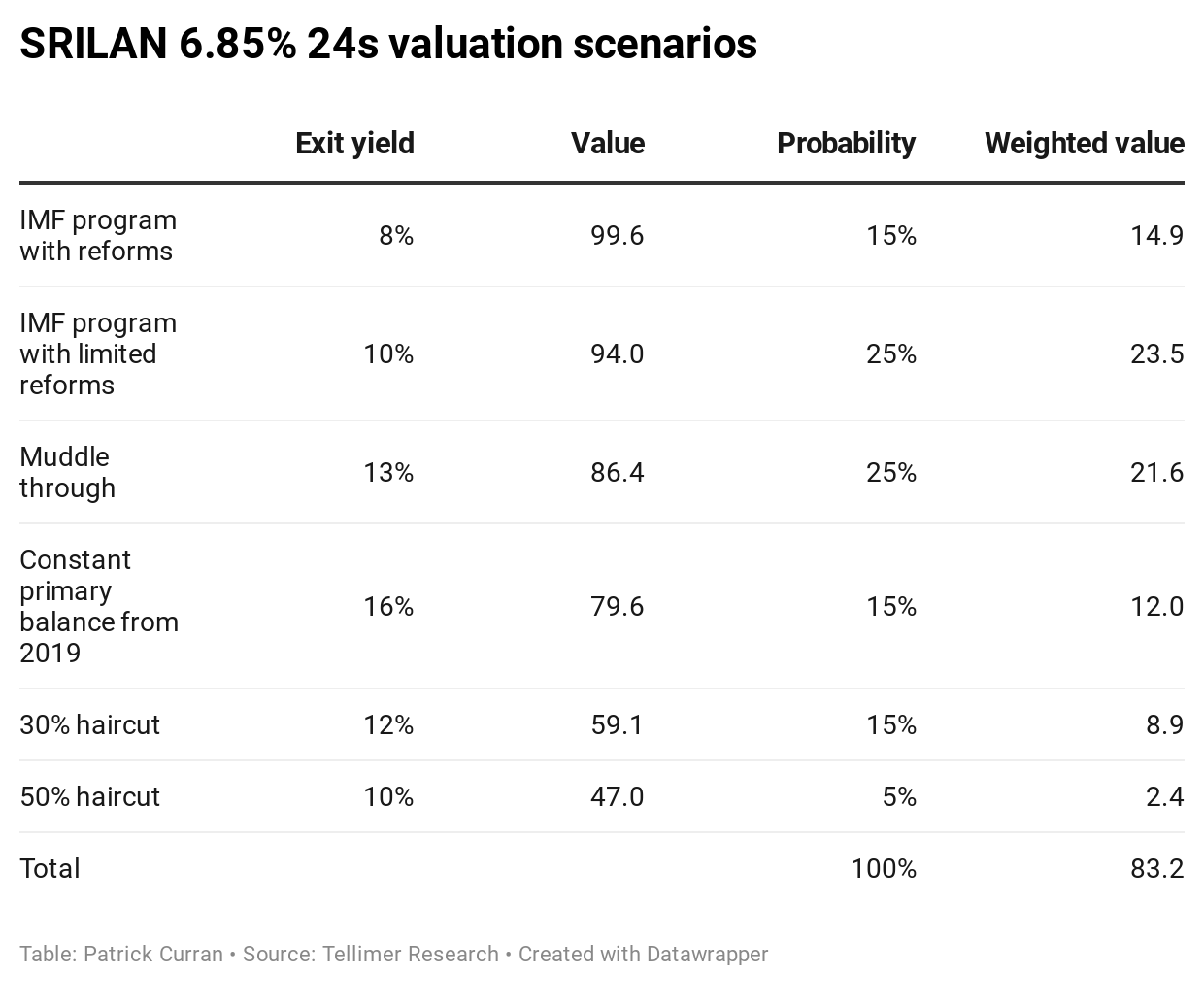 With SRILAN 6.85% 24s still trading at a spread of c1,150bps (c450bps above the B-rated averaged and higher than all non-distressed peers), there could still be value to holding Sri Lankan eurobonds. SRILAN 6.85% 24s are still trading far wide of their 450bps pre-Covid spread, implying potential upside if an IMF program is secured.

However, we think the upside is largely priced in after this week’s c5% rally. While we await signs of government fiscal policy priorities (which will come in the upcoming 2021 budget) and progress (or lack thereof) on IMF negotiations, the elections have presented a good opportunity to take profits and we therefore downgrade from Buy to Hold.