Sri Lankan eurobonds have continued to drop, with the SRILAN 6.85 03/14/2024s now sitting below US$52 versus our most recent target price of US$55. However, despite reserves dropping to just one month of import and two months of external debt service, policymakers still refuse to acknowledge the gravity of the situation, preferring to rely on ad hoc FX swaps and bridge financing to meet its external debt service obligations, including the US$500mn eurobond maturity in January (part of a US$1.3bn debt service bill from December to January versus liquid reserves of just US$1bn). 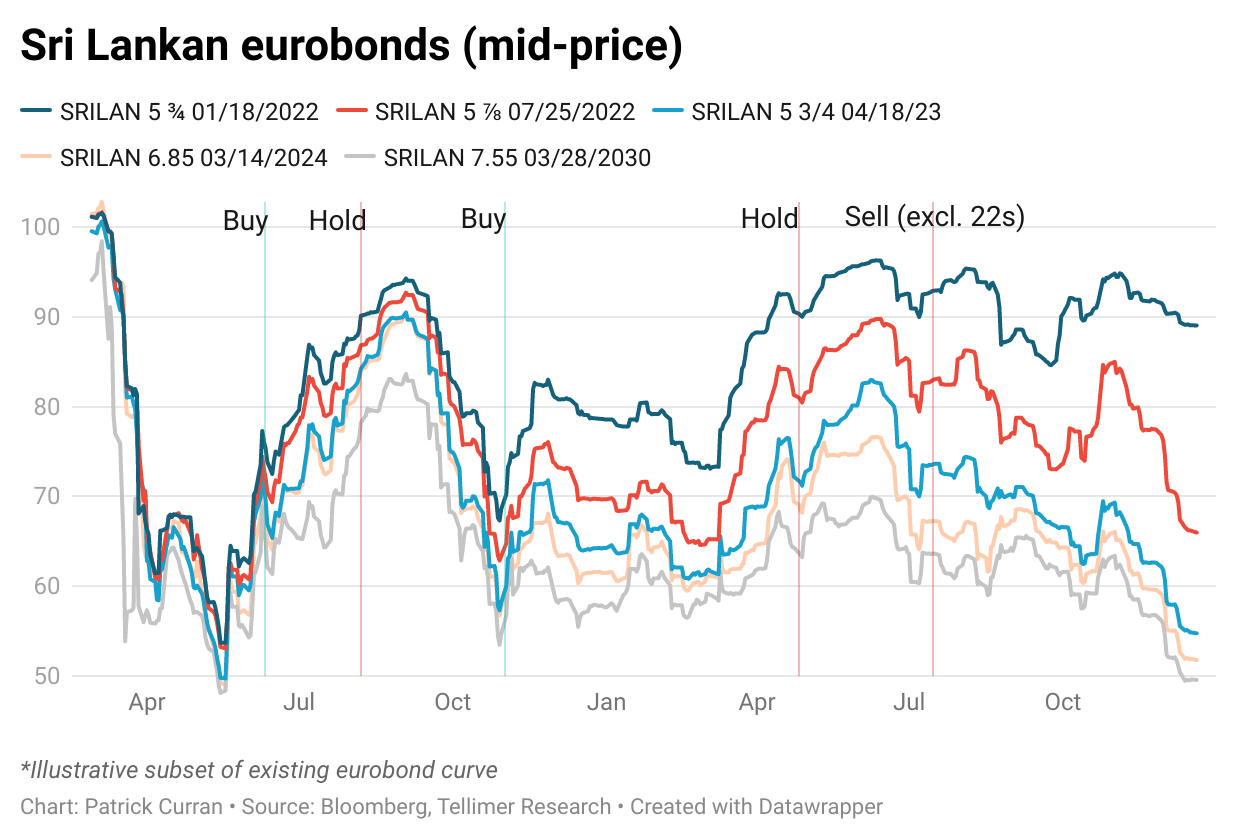 Instead of consolidating the budget, devaluing the currency, and reaching out to the IMF, the CBSL spent over US$370mn to defend the currency last month and policymakers have proposed increasingly desperate sounding measures like a “coupon system” to combat rising food and fuel prices and shortages and a LKR 10/US$ incentive to remit money via formal channels, alongside a crackdown on agents selling FX above the LKR200/US$ peg as remittances fell c50% yoy in November to a 12-year low (with expats preferring to remit via informal channels at the parallel LKR240/US$ exchange rate).

CBSL Governor Cabraal continues to assure investors that all external debt due in 2022 will be repaid, but his statements ring hollow. Indeed, Fitch downgraded to Sri Lanka to CC from CCC over the weekend, saying that it will be difficult to meet its external debt obligations in 2022 without new financing, prompting an angry statement from the government that Fitch’s urgency to downgrade Sri Lanka was “inconceivable” and that “measures undertaken by the government and the central bank to secure support from friendly nations in the region are nearing fruition.”

This time around, however, we use more well-defined assumptions on the timing of the restructuring and structure of the subsequent coupon payments. In both restructuring scenarios, we assume that default is triggered by failure to pay its January 2022 eurobond when it falls due. We assume that it will take a year to negotiate the restructuring, during which time interest will be capitalised. After that, we assume a coupon step-up for all bonds from 0% in 2023 to 2% in 2024, 4% in 2025, and 6% thereafter.

We apply two different exit yield curves to both restructuring scenarios, including an “optimistic” curve that assumes strong creditor buy-in to the restructuring process and a credible post-restructuring reform programme and a “pessimistic” curve that assumes the opposite. These curves are constructed with Pakistan’s eurobond curve as the basis, with 200bps added for the optimistic curve and 400bps added for the pessimistic curve (equating to 10-year exit yields of 9.5% and 11.5%, respectively). 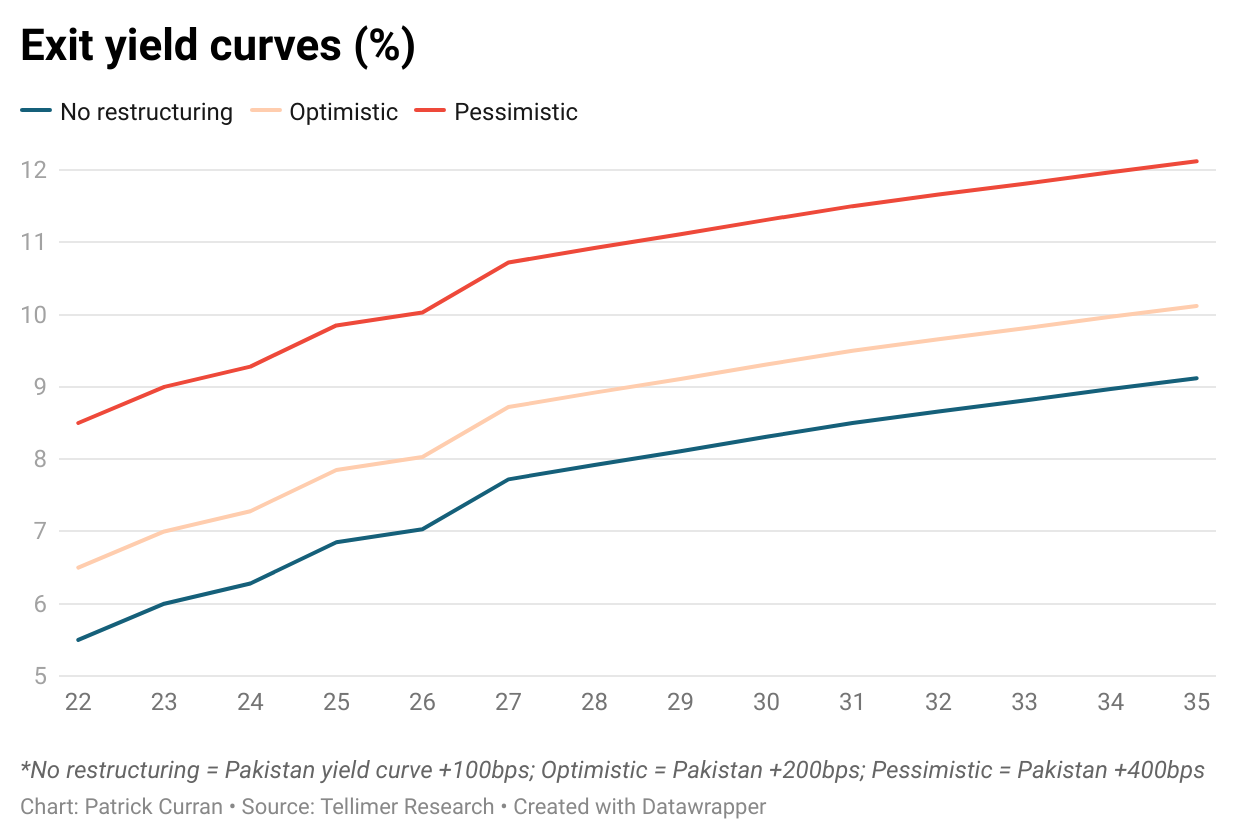 Lastly, we raise the probability of default beyond 2022 from 80% to 85%, and apply an equal 21.25% probability to each of the four restructuring scenarios. For the no-default scenario, we construct our exit yield curve based on Pakistan +100bps. We summarise the five possible scenarios below:

We get a probability-weighted valuation of US$52 for the SRILAN 6.85 03/14/2024s, in line with the current price. As such, we upgrade our recommendation on Sri Lanka’s post-2022 eurobond curve from Sell to Hold.

There is downside risk if the bearish restructuring materialises, but some scope for appreciation if Sri Lanka can draw on some of the funding it has mentioned but so far failed to deliver (including a US$400mn swap from India and US$1.5bn swap from China) or softens its IMF stance.

For this reason, we remain agnostic on the SRILAN 5 ⅞ 07/25/2022s at cUS$66. While default is inevitable without a major policy shift (and even then, it is likely unavoidable), the timing can be delayed if Sri Lanka can mobilise financing to bridge the gap, and this could, in turn, impact the market’s perception of Sri Lanka’s ability to continue muddling through. However, we think this only delays the inevitable and should dilute the value of bonds further down the eurobond curve.

And with liquid FX reserves at just US$1bn at the end of November versus external debt service of over US$1.3bn from December to January, even last-ditch funding efforts could fall short. We think it is a tossup whether the SRILAN 5 ¾ 01/18/2022s will be paid, and at just below US$90 we think the downside risk far outweighs the upside and maintain our Sell recommendation.