The Central Bank of Sri Lanka (CBSL) released its annual report for 2020 last week, containing a wealth of useful data. From the report, we draw several key conclusions:

The reclassification of locally-held ISBs as domestic debt caused a bit of a stir in the market last week, but the motive and implications thereof are still not clear. Domestic investors doubled their ISB holdings from US$1.1bn in 2019 to US$2.2bn in 2020, with the classification applied retrospectively, as non-residents reduced their holdings from $13.9bn to $11.8bn, reflecting US$1.1bn of sales to residents and the US$1bn amortisation in October. Of the US$1bn eurobond maturing this July, US$300mn is now reportedly held domestically.

Regardless, the ISB still has to be paid in dollars and thus constitutes a drain on reserves. However, it does reduce the external transfer, increasing the amount of FX supply in Sri Lanka’s economy since less FX is likely to be repatriated abroad. The reserve impact could also potentially be minimised if Sri Lanka coerces local banks into accepting payment in LKR rather than US$ (though the legality of this is unclear) or pressures them to sell the FX proceeds back to the CBSL at favourable rates to reduce the impact on the LKR, but otherwise, the reserve impact will not be changed.

The reclassification is consistent with the IMF practice of classifying debt by residency rather than by currency, and indeed the CBSL notes that the change in treatment was aimed at bringing its data in line with the IMF’s 2014 Manual of Government Finance Statistics. Likewise, non-resident holdings of domestic government debt and Sri Lanka Development Bonds (SLDBs) have been classified as foreign debt (though these are each a negligible US$31mn at the end of 2020).

Still, investors may worry that there is an ulterior motive to pre-emptively minimise the impact of a potential ISB restructuring on domestic holders and/or potentially to influence the outcome of any restructuring. But in practice, and legally, we do not think it is possible to discriminate between resident and non-resident holders of the same international law instrument. Debt is generally differentiated in a restructuring on the basis of currency or governing law, so any change in accounting treatment should not waive the legal requirement to treat all holders of the same instrument pari passu.

With that said, the reclassification probably was not undertaken to influence the outcome of a potential restructuring. It was more likely meant to flatter the debt figures by lowering the external debt stock. The government reports a debt stock of 101% of GDP at the end of 2020 (60.6% domestic, 40.4% external). Reporting by currency instead of residence would add 6% of GDP to the external debt stock (shifting the mix to 54.6% of GDP domestic, 46.4% external) without changing the 101% headline. 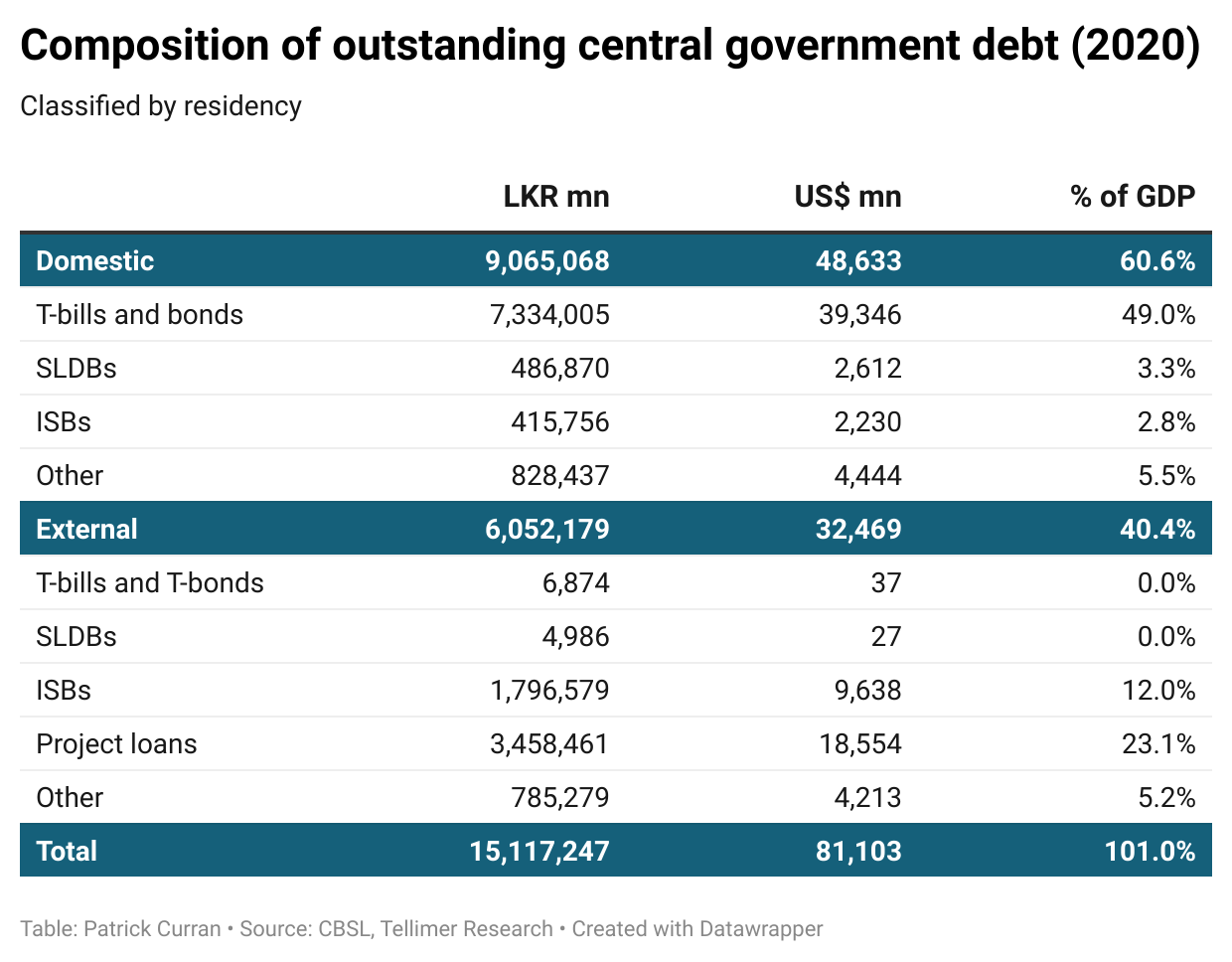 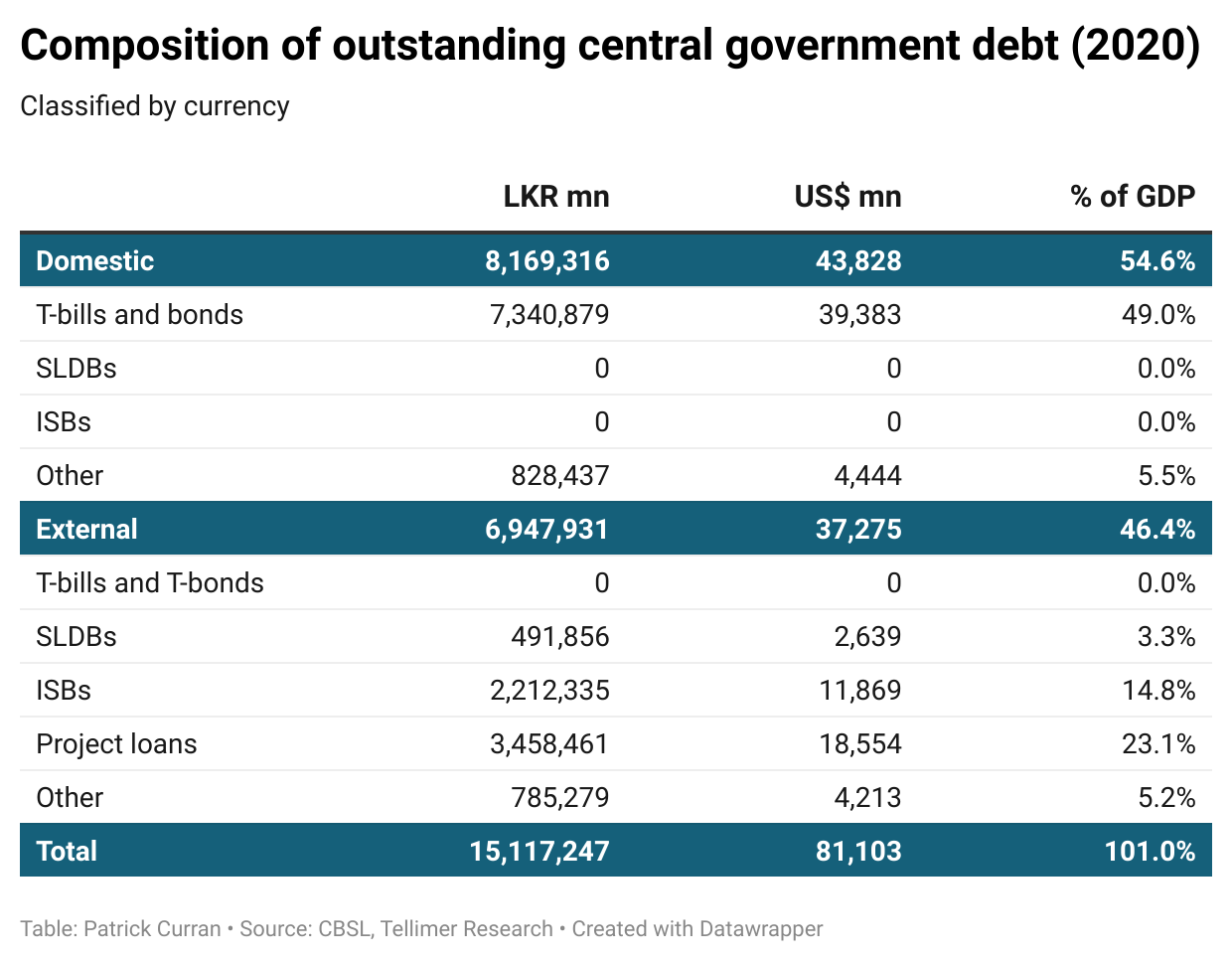 From this perspective, the reclassification could still impact the contours of a potential restructuring. By carving out some of the bonds as domestic debt, it might put more of the burden on foreign bondholders to meet relevant debt thresholds in the event of restructuring (though as we have said, the bonds will likely have to be treated pari passu regardless of classification, so this is probably a moot point). Conversely, if the relevant debt thresholds are stated in terms of external debt rather than total debt, the reduction of external debt from the accounting perspective could actually reduce the burden imposed on bondholders to reach the relevant thresholds.

And, despite the practicalities, the optics of the reclassification may not look so good. Investors may be concerned that it could be a way of allowing the government to exert pressure on local banks to engage in some sort of voluntary swap into local law instruments (like the SLDBs) in exchange for some sort of regulatory forbearance or to prevent holdouts by pressuring the banking bloc to vote a certain way (depending on the presence of CACs and voting thresholds), though the authorities might still be able to do this even without the change in classification.

Beyond classification, there is another accounting issue that understates Sri Lanka’s indebtedness. Official data accounts for Sri Lanka’s ISBs at market value. With Sri Lankan eurobonds trading at a discount of c12-43% of par at year-end, this grossly understates the true liability. In reporting Sri Lanka’s external debt stock, the CBSL uses a market value of US$7,555mn for non-resident holdings of ISBs versus a face value of US$11,820mn, understating the nominal US$ stock of external debt by US$4,265mn.

The data used to calculate the total central government debt stock (LKR 15,117bn or 101% of GDP) understates the number by a slightly smaller but still material amount. The ISB stock across resident and non-resident holders is listed at LKR 2,212bn, which translates to US$11.87bn at the report’s implied exchange rate of 186.4/US$. With a face value of US$14.05bn, this understates the total debt stock by US$2.18bn (2.7% of GDP).

While Sri Lanka could potentially realise some of the benefits of the lower market value by repurchasing the bonds, the nominal value is the true amount owed from the debtor’s perspective. Adding the underreported 2.7% of GDP, plus 6.6% of GDP in public guarantees and 2.1% of GDP on non-guaranteed SOE debt, Sri Lanka’s total public debt stock reaches an alarming 112.4% of GDP. 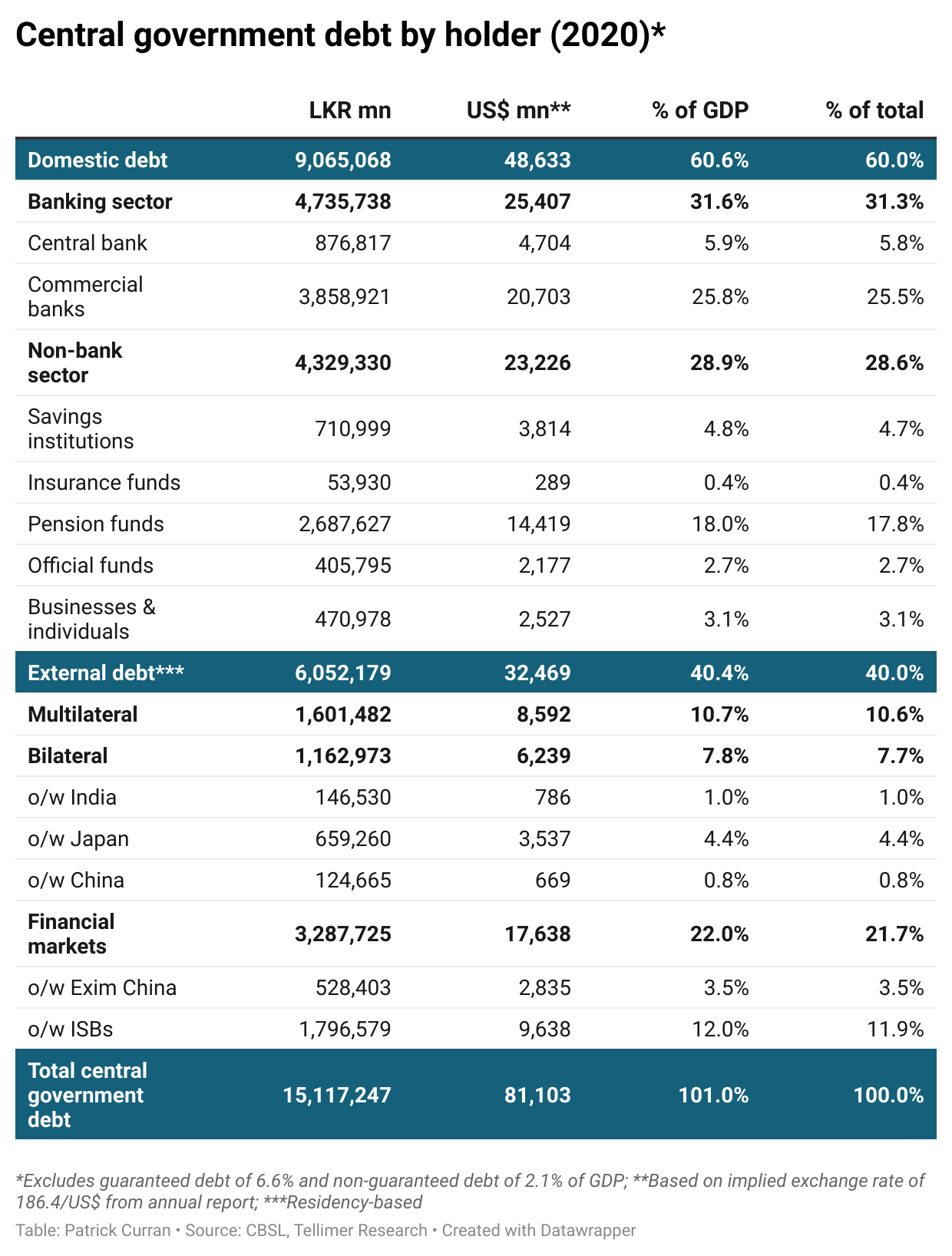 Even the headline 101% of GDP government debt figure is concerning when compared to previous estimates, rising nearly 6% of GDP over November’s budget estimate and 1% of GDP above April’s WEO estimate. The main driver was aggressive fiscal slippage towards year-end, with the 2020 budget deficit coming in at 11.1% versus a projection of 7.9% in the November budget. The worse starting point also leads to slightly less ambitious medium-term targets, delaying the targeted fiscal consolidation. 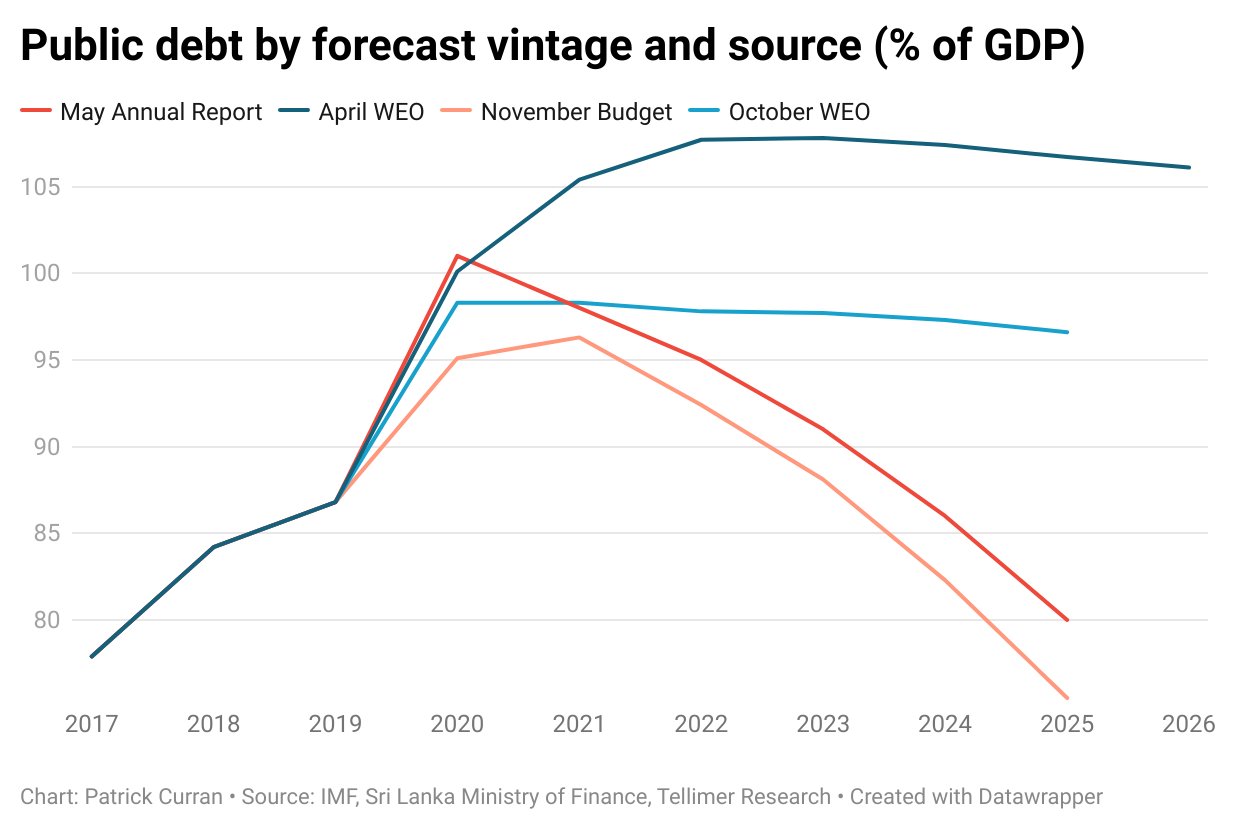 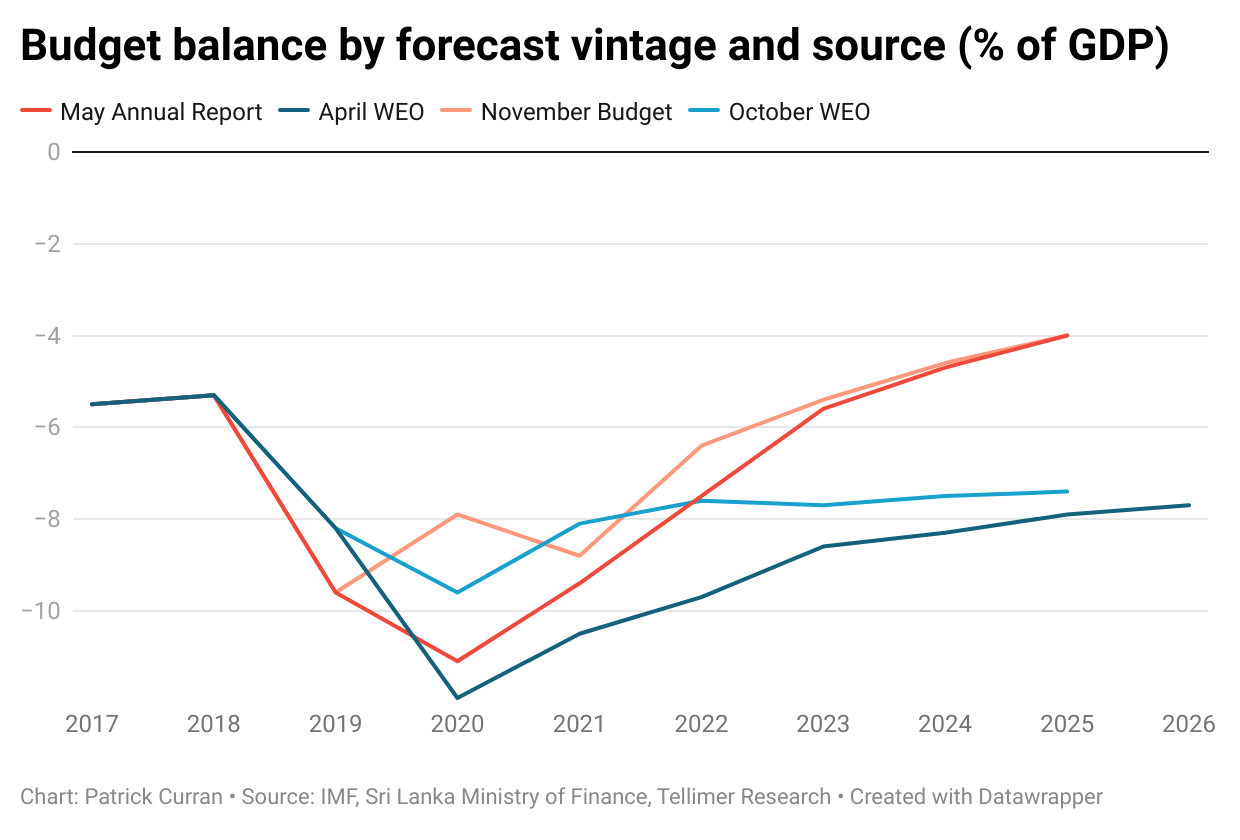 However, while the deficit was 11.1%, public borrowing pushed up the debt stock by a total of 13.9% of GDP in 2020. This is due to the reclassification of 0.8% of GDP of current spending and 2% of GDP of capex in 2020 to 2019, when the expenses were actually accrued. As such, 2.8% of GDP of spending in 2020 was actually clearance of arrears built up in 2019, pushing the 2019 deficit to 9.6% of GDP from the original 6.8% estimate. While this was already accounted for in the headline budget estimate from the November 2020 budget, it was not included in the debt stock and thus understated the 2019 figure.

Once arrears are reclassified, total revenue and grants fell by a precipitous 28% in 2020 while current spending rose by 5% and capex fell by 46%. The composition of the budget has deteriorated notably, with capex declining from 6.1% to 3.3% of GDP and interest payments rising from 6% to 6.5% of GDP (eating up a worrying 71% of government revenue, from just 47% in 2019). The financing mix has also deteriorated, with the CBSL financing 3.8% of GDP of the deficit (and with residents financing the balance, there may not be much more runway to keep borrowing so much domestically). 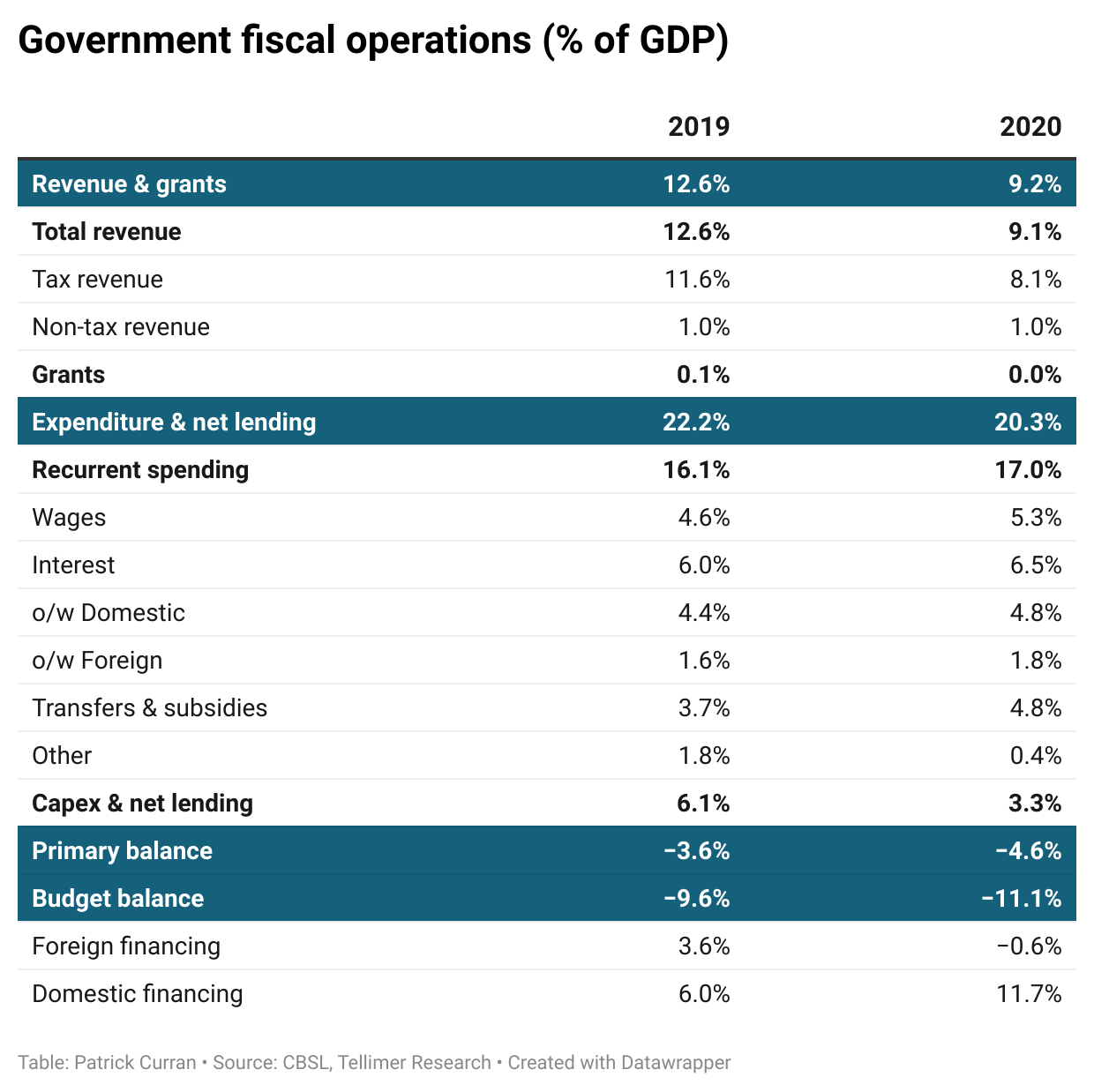 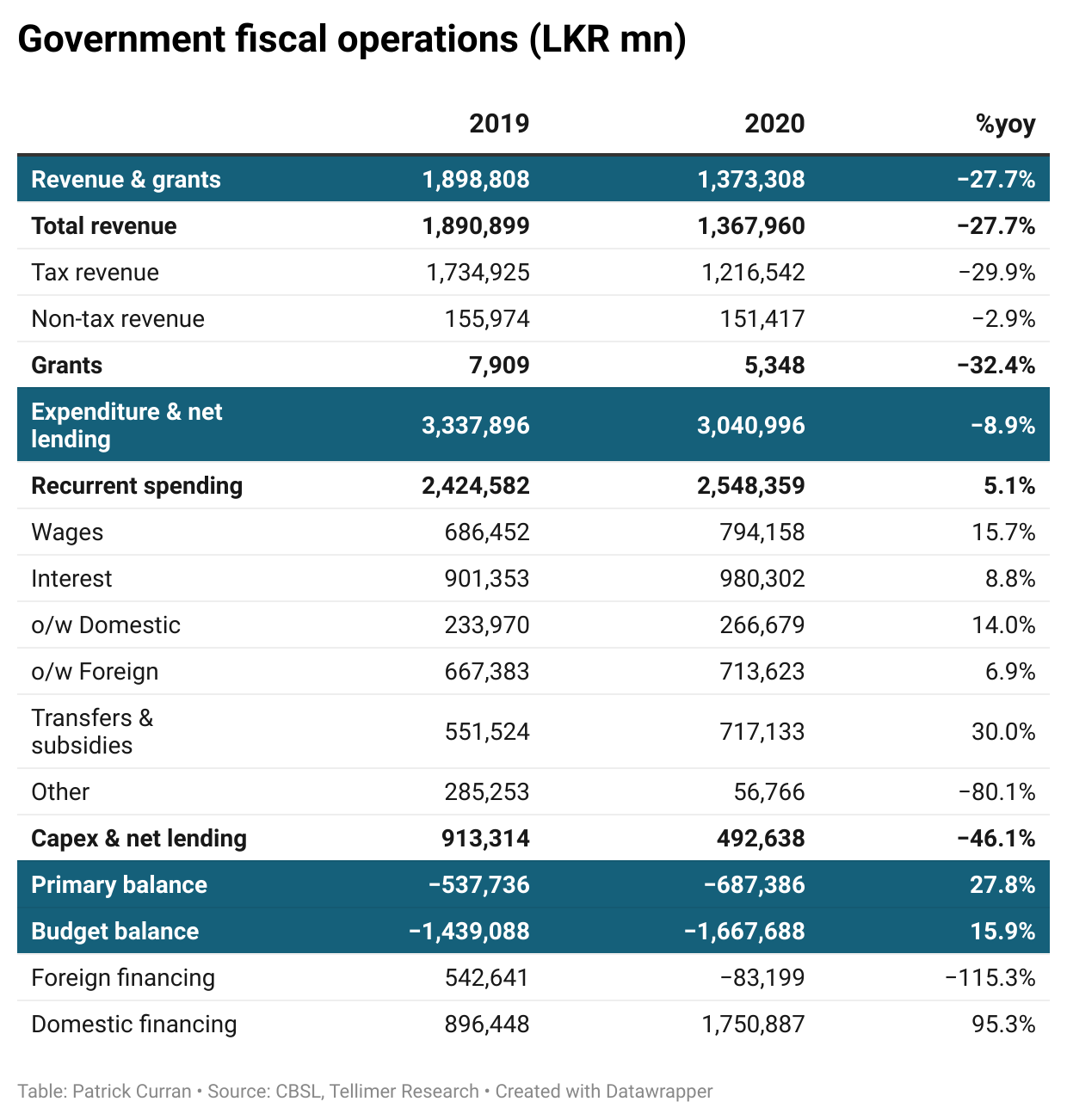 While some of the deterioration is Covid-related, the 1.6% of GDP decline in VAT revenue stems largely from the December 2019 VAT reduction (from 15% to 8%) and will not be recovered without a policy reversal. However, the CBSL report seems to imply that the tax cuts are here to stay, saying that the "Government is keen on maintaining the current tax policy for the medium term." With 70% of spending comprised of sticky items like salaries and interest, capex already cut to the bone, and the VAT cuts here to stay, the government will have to find alternative measures to boost government revenue from a meagre 9.1% of GDP to achieve its fiscal consolidation targets. Otherwise, we think slippage is inevitable.

Even if the government’s deficit targets are achieved, we think its forecasts vastly overstate the degree to which debt will be reduced over the medium-term. Plugging in the government’s budget targets and the IMF’s macro and interest rate assumptions to our DSA model results in a debt stock of nearly 104% of GDP in 2025, not 80% as implied by the CBSL. Even using the government’s more optimistic growth forecasts (ie 7% growth by 2025) results in a debt stock of 92% of GDP in 2025, which suggests that the CBSL is using extremely rosy interest rate assumptions or that its debt forecasts are simply flawed.

The CBSL’s balance of payments (BOP) estimates also appear overly optimistic. The current account deficit narrowed from 2.2% to 1.3% of GDP in 2020 and is projected to narrow further to 0.2% of GDP in 2021 before reaching a surplus of 0.2% in 2022 and 1% of GDP by 2025. Against this backdrop, reserves are expected to rise to 5 months of import by 2025. However, this is based on the assumptions of 14% annual export growth versus 7% import growth, which will likely prove overly optimistic (the Q1 growth rate was 13% yoy for exports and 12% for imports, but due largely to weak March 2020 base effects). 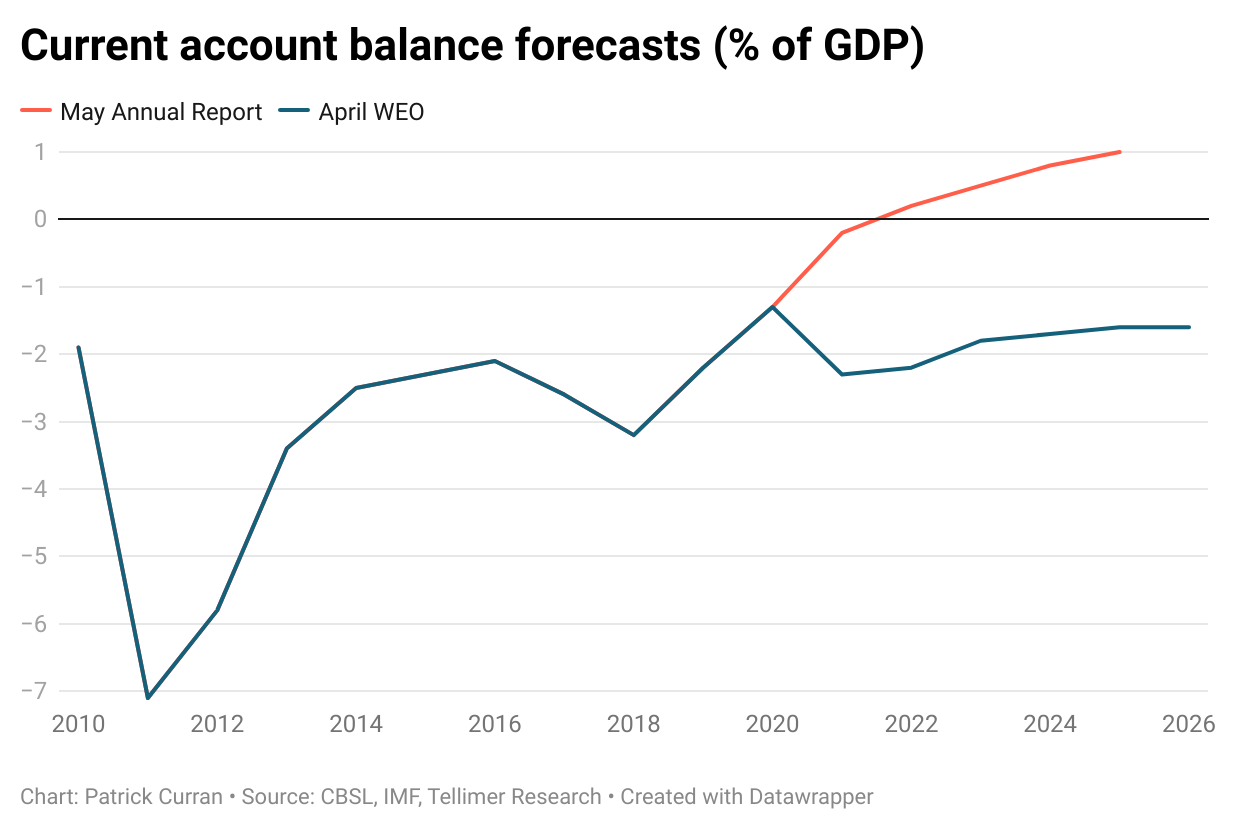 On the BOP financing front, news emerged this week that the government has secured another US$500mn from the Eximbank of Korea for projects from 2020-22. The loans will have a 40-year payback period with a 10-year grace period at rates of 0.15-0.20%. Sri Lanka ‘24s rallied 3pts (4.2%) on Monday and Tuesday, continuing a 16.5pt (27.7%) rally that began in mid-February, before giving back some of the gains on Wednesday. However, we think the reaction is excessive. 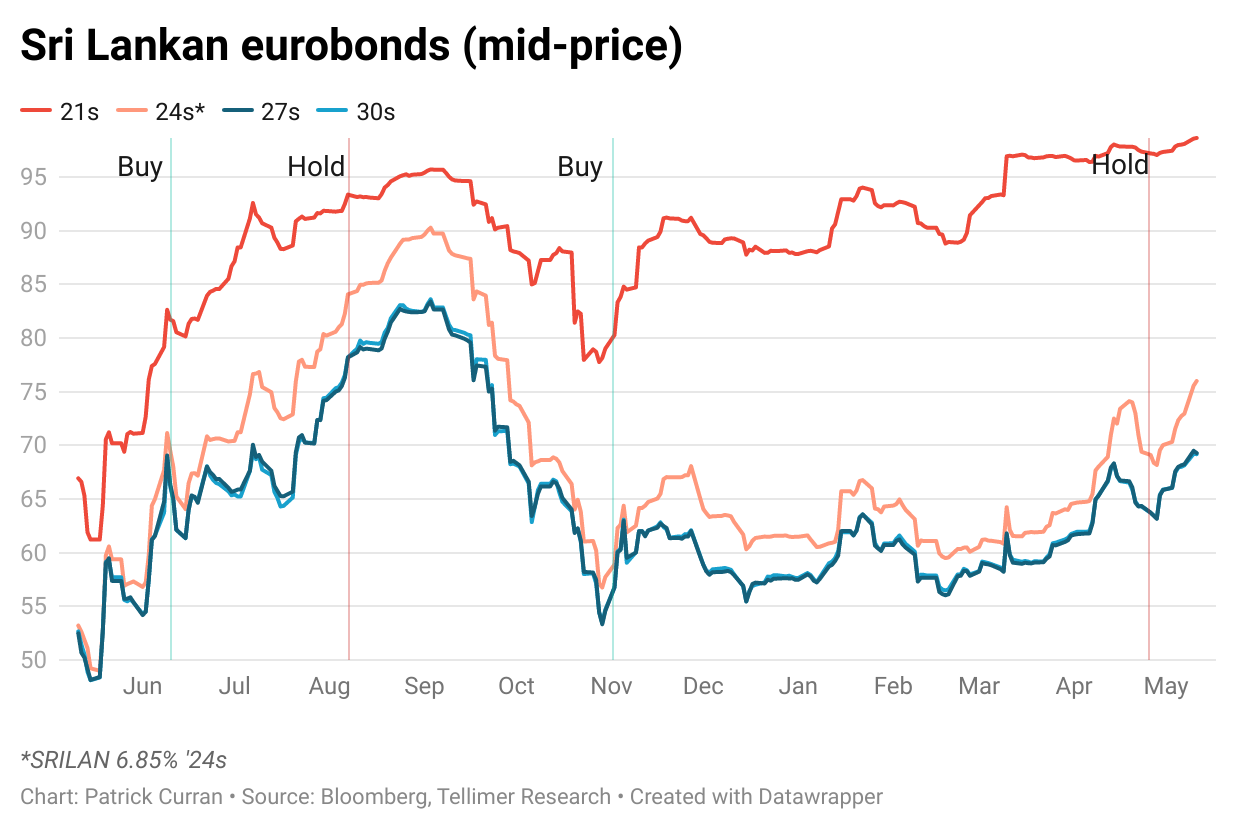 Firstly, this funding is likely to be disbursed gradually over the next two years and will be tied to specific projects, so it is not fungible to rollover other external obligations and will likely have less than a US$500mn impact on the BOP depending on the import content of the projects in question. Secondly, the headline figure of US$500mn represents the maximum for project loans over that period, which could differ significantly from actual disbursements. Indeed, Korea made a similar US$500mn financing pledge for the 2017-19 period, during which time only cUS$30mn was disbursed.

Last week’s annual report by the CBSL was eye-opening in a number of ways. While we do not think investors should read too much into the decision to reclassify debt at this point, new data shows that fiscal outcomes were worse than previously reported in 2019 and 2020 and reveal some troubling accounting practices that obscure Sri Lanka’s true debt situation.

Alongside the announcement of new project financing, we think developments over the past week have been neutral-to-slightly negative. After the recent rally, we think Sri Lankan eurobonds are now trading slightly above fair value, but are still attractive on a relative value basis. We reaffirm our Hold recommendation on the Sri Lanka ‘21s and ‘24s at a price of 98.7 and 76.0 (yield of 12.7% and 18.0%, respectively) on a mid-basis as of cob on 11 May on Bloomberg.

Time to take profits as upside is priced in, 26 April

Back to Buy as the pessimism is excessive, 2 November