Sri Lanka is facing a major ecological disaster after the MV X-Press Pearl, a ship carrying 1,486 containers, many filled with chemicals and cosmetics, began to sink into the water this week. The crisis has been steadily worsening since a fire broke out on the ship on 20 May, reportedly caused by its chemical cargo (with 81 containers filled with “dangerous goods”, including 25 tonnes of nitric acid, which is used to make explosives and fertiliser, and polyethylene, a plastic polymer used in packaging and household products).

The damage caused by the fire has already been substantial, with chemicals spilling into the sea and plastic pellets washing ashore on beaches near the popular resort area of Negombo (located less than an hours’ drive from Colombo). The spill has raised concerns over the potential impact on the local environment and livelihoods, with tourism and fishing both likely to be adversely impacted in a region reliant on the two industries for jobs (an estimated 100,000 people are dependent on the fishing industry in the area).

But the chemical spill may just be the beginning, with efforts to move the ship into deeper waters failing on Wednesday as the stern sunk to the seabed. X-Press Feeders, the Singapore-based carrier, has now reportedly shifted its focus to mitigation rather than prevention, but heavy rains and strong winds are hampering salvage efforts. As the ship sinks, the fear is that it will spill its fuel into the water and turn an already devastating chemical spill into an oil spill as well. The ship was reportedly carrying 300 tonnes of fuel when it caught fire, but officials say that much of it has likely already burned off in the fire.

Impact on tourism likely to be minimal

The chemical spill brings back memories of a similar disaster in Mauritius last July, with clear implications for tourism-dependent island economies. While Sri Lanka is less dependent on tourism than Mauritius and other small island economies, the sector directly and indirectly employs 403,000 people (4.9% of jobs) and generates 27.7% of total export proceeds and US$3.6bn (4.6% of GDP) of income in 2019 (a decline from the US$4.4bn (5.4% of GDP) in 2018 before the April 2019 Easter Sunday attacks). 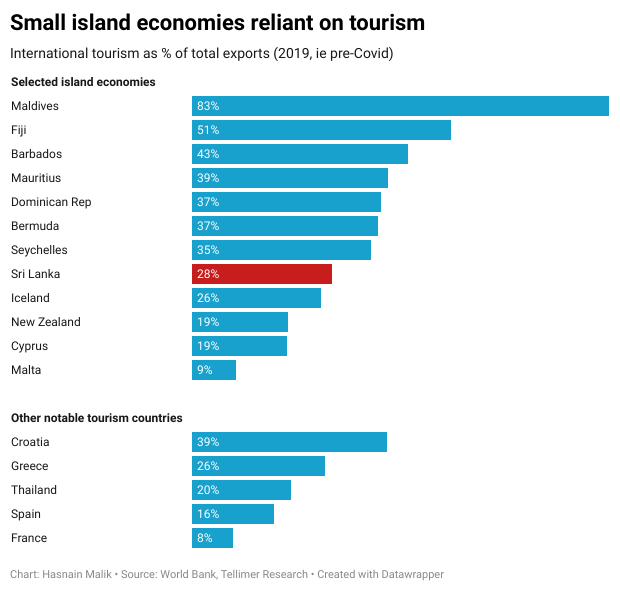 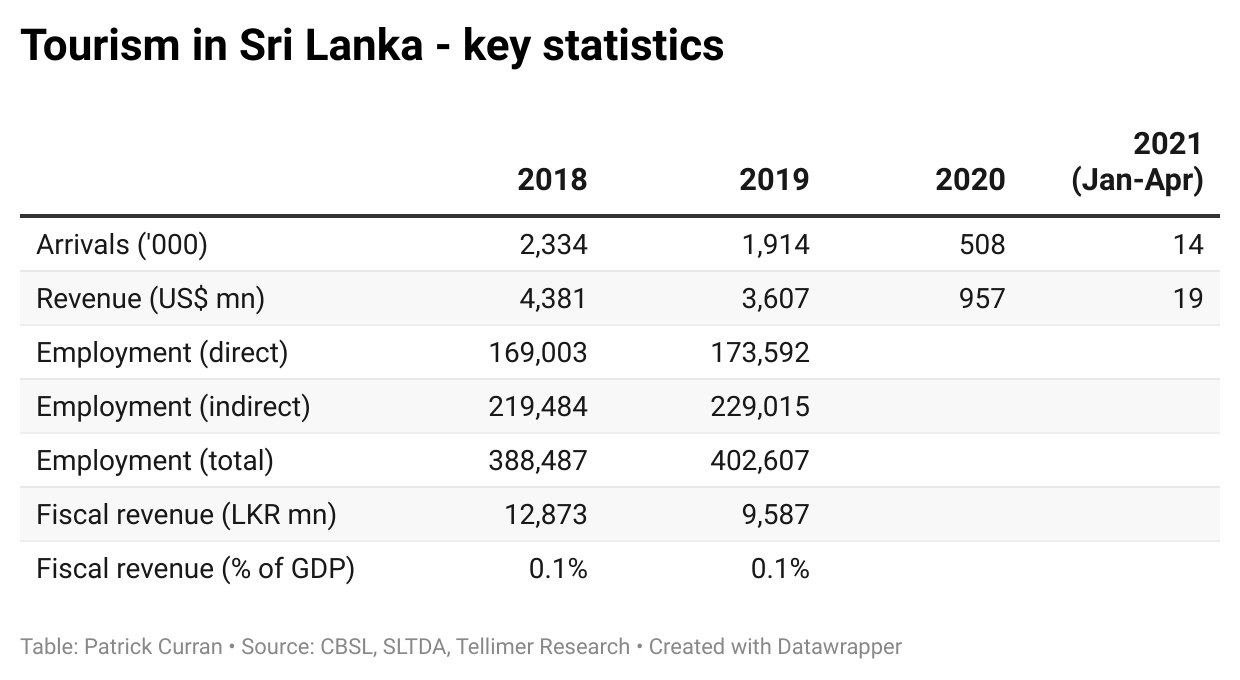 While Negombo is a popular resort area, tourism there is dwarfed by the South Coast region and the Greater Colombo area within which it is situated comprised just 12% of total arrivals in 2019. Taking 2019 as our baseline for post-Covid earnings potential, and assuming the spill will reduce tourism by 50% in the Greater Colombo region over the medium term, we estimate the cost of the spill in terms of income and FX earnings at US$220mn (0.3% of 2020 GDP). However, this is likely to be an overestimate of the tourism impact, and the true cost will probably be closer to 0.1-0.2% of GDP. 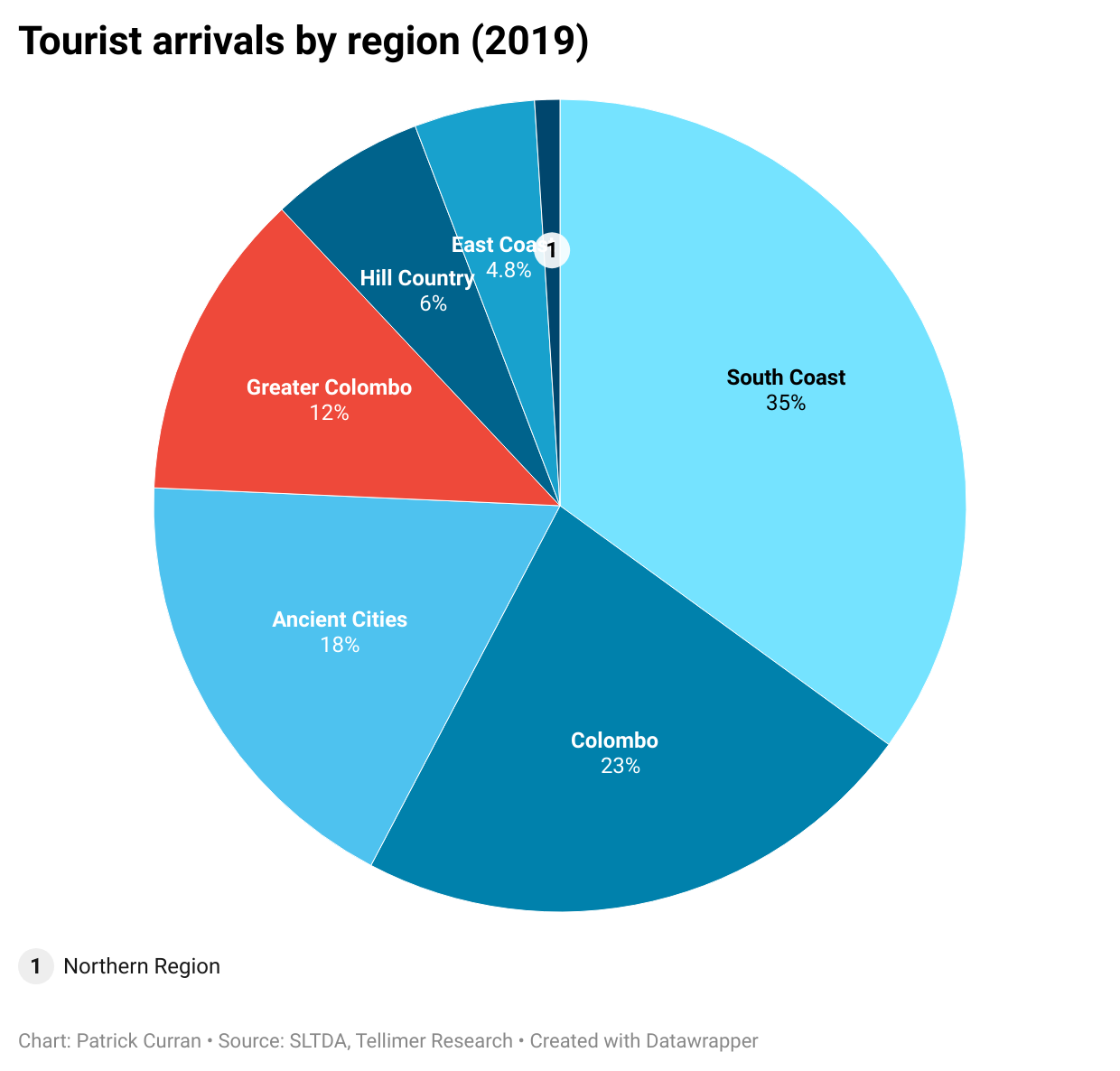 Further, with fiscal revenue from tourism reaching just 0.1% of GDP in 2019 and X-Press likely to foot the bill for the clean-up, the impact on the budget will be minimal (though it may require some additional spending to offset the loss of income and jobs in the area in the near term, and costs could increase if contamination spreads to the nearby Kelani River, which is one of the major water sources for Colombo). Nonetheless, while the impact on the regional environment and employment could be devastating, the macro implications of the spill should not be overstated.

As a key FX earner, the recovery of Sri Lanka’s tourism sector is essential to restore external balance. So far this year, the prognosis does not look very good. While Sri Lanka temporarily lifted a ban on inbound travellers from 1 June, onerous requirements (including a limit of 75 passengers on flights and a requirement to quarantine for 14 days) have kept arrivals below 14,000 over the first 4 months of the year (with 42% coming from Ukraine or Kazakhstan). 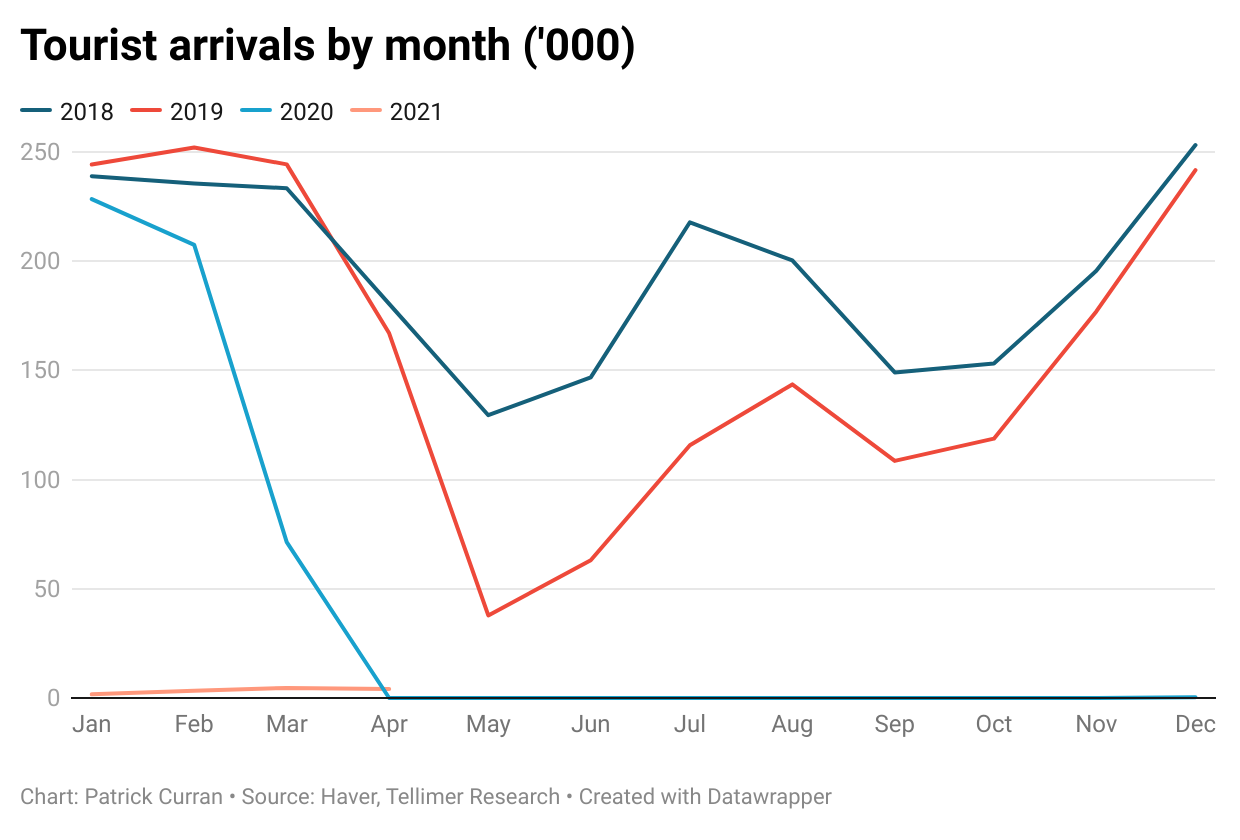 Sri Lanka’s tourism outlook will hinge on its ability to contain Covid infections, with the US initiating a Level 4 (do not travel) advisory on 25 May due to rising cases. Meanwhile, India’s recent wave of infections has also set back the tourism recovery, prompting the country to backtrack on plans to deliver 13.5mn Oxford-AstraZeneca doses and likely reducing tourism from Sri Lanka’s key source market (19% of tourist arrivals in 2019). 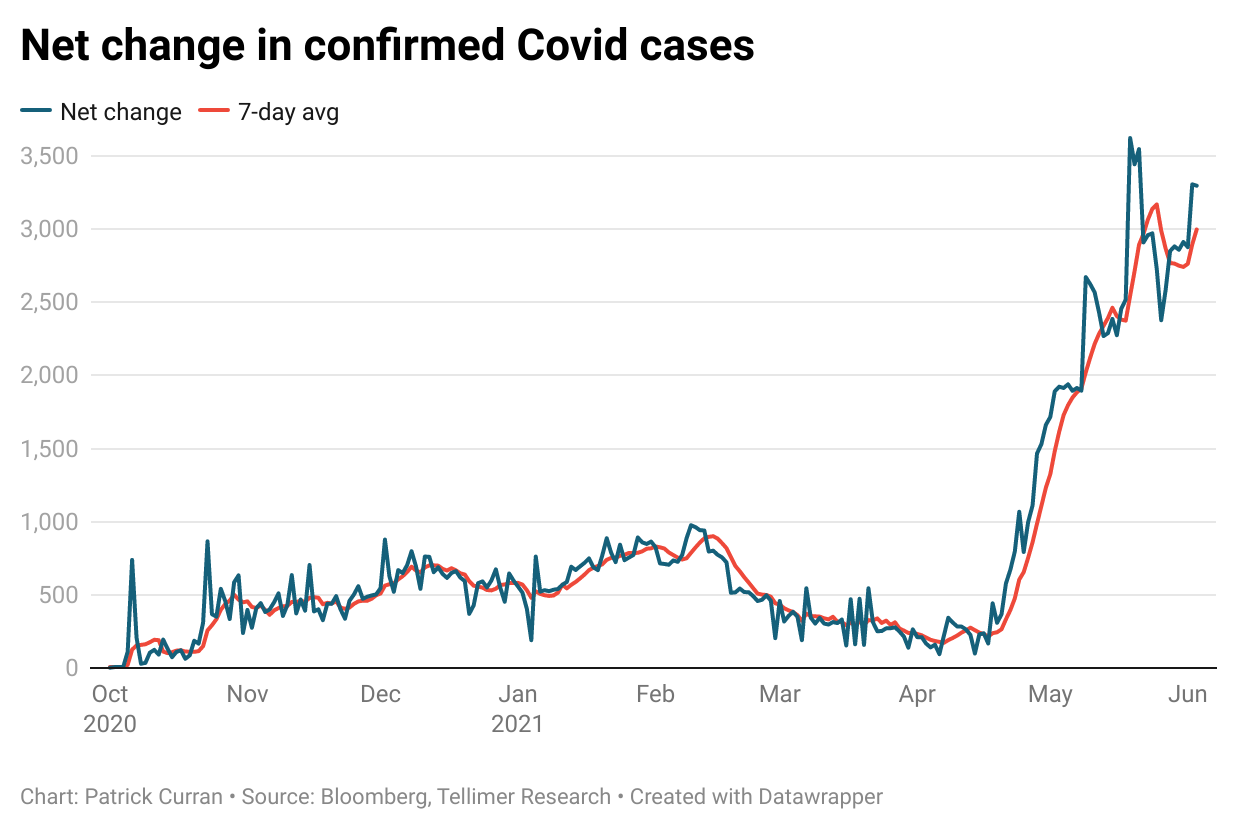 With only 1.8mn vaccine doses administered so far and an insufficient purchase pipeline to reach anything close to herd immunity this year, Sri Lanka is in a race with the clock to vaccinate residents and contain the virus ahead of the December to March peak season. While few people expect a material rebound before that, failure to contain the virus by winter could be a devastating hit to the BOP and will likely require a more prolonged reliance on harmful import controls to slow the bleed in reserves.

A US$1.5bn swap from the PBoC and US$500mn loan from the CDB have provided some respite, with the latter pushing reserves from US$4.06bn to US$4.47bn in April. However, reserves would have continued to decline without the CDB disbursement, and will remain strained without more concerted efforts to consolidate the budget and boost flagging FDI. While we think Sri Lanka will pay its US$1bn eurobond maturity at the end of July, ability to pay beyond that will be contingent on bona fide fiscal consolidation (and likely an IMF programme to backstop reforms and unlock funding).

Measured by the local Colombo All-Share, equities are up over 50% in US$ total return terms in the last year, on par with Bangladesh and Vietnam in small emerging and frontier Asia, although trailing year to date (up 6% versus up 12% in Bangladesh and up 24% in Vietnam).

Forward price/book is 0.7x, a 30% discount to the 5-year median, for about 12% ROE, which looks attractive. And forward dividend yield is 5.0%, which is appealing for local investors compared to negative 0.6% real interest rate.

However, for international investors, we do not find Sri Lanka appealing for two reasons.

Sri Lanka: Time to take profits as upside is priced in (Curran), April 2021

Mauritius shows the difficulty in defining ‘winners’ in the Covid-19 trek (Hamilton), August 2020