It has been a busy week for Sri Lanka, with its US$500mn eurobond successfully retired and President Rajapaksa opening the latest session of parliament and giving a speech on Sri Lanka’s economic outlook on Tuesday, and the CBSL hiking its policy rate by 50bps earlier today.

Government promises to make good on its January eurobond obligation held true, made possible by the drawing of its US$1.5bn swap line with the PBoC in December, another US$400mn swap with India as part of the SAARC credit facility, and the deferment of US$512mn of payments owed to India earlier in the month. However, swaps and debt deferments are of a short-term nature and will exacerbate Sri Lanka's difficult repayment profile when they eventually come due (which is just two months from now, in the case of India's debt deferment), effectively trading short-term liquidity constraints for a greater risk of long-term distress.

With most of the more concrete items in Sri Lanka’s financing pipeline now drawn upon, and much of the planned financing outlined in Sri Lanka's six-month roadmap in September unlikely to materialise (or likely to include restrictions on its usage, which may well be the case with the US$1.5bn PBoC swap), Sri Lanka may struggle to plug its funding gap moving forward. The IMF projects a current account deficit of US$2.4bn and the World Bank IDS database cites US$3.7bn of public external amortisation in 2022, leading to US$6.1bn of gross external financing needs. If net FDI ticks up marginally from US$500mn in the 12 months through Q3 21 to US$600mn in 2022, this leaves Sri Lanka with a US$5.5bn GEFR in 2022 (though FDI could be higher if the Colombo Port attracts any chunky inflows). 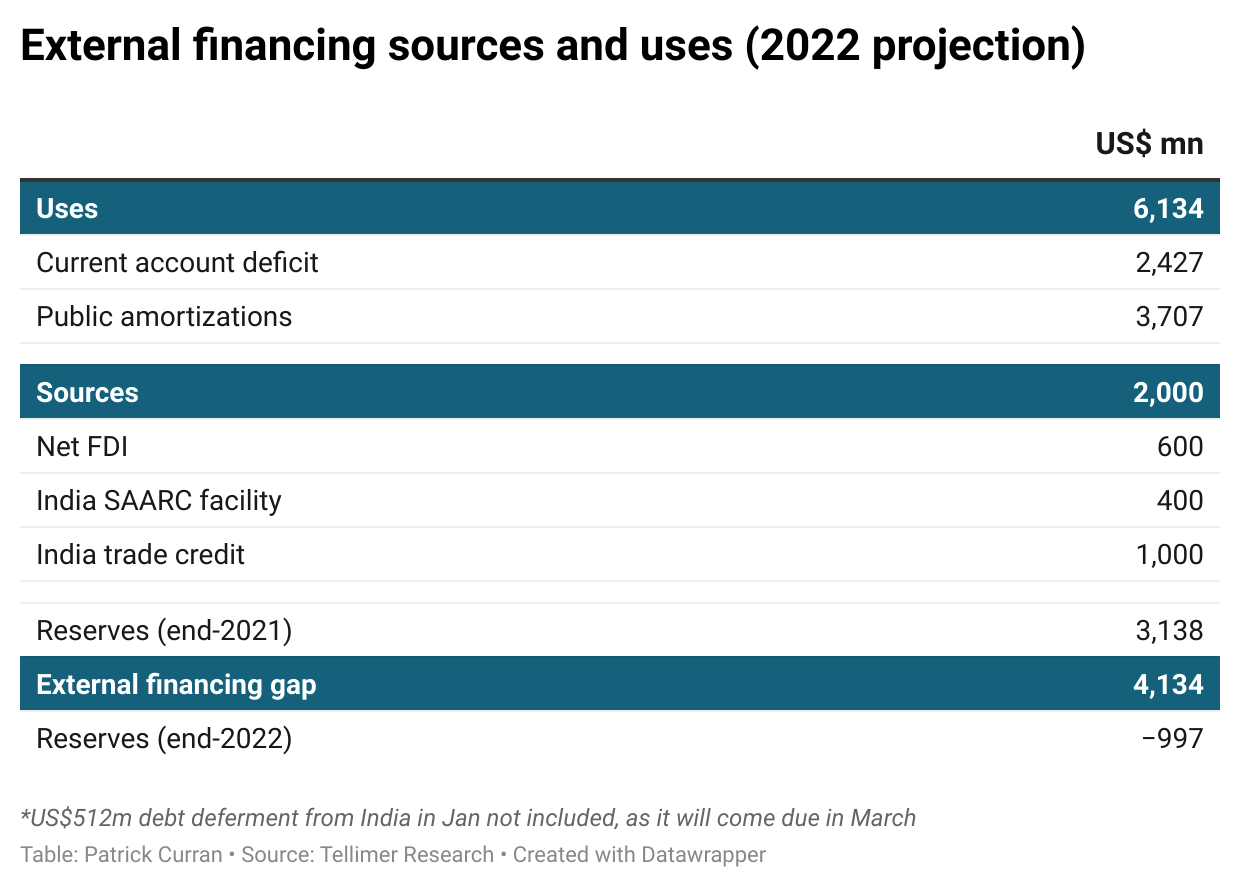 Factoring in Sri Lanka's identified financing sources (including the US$400mn SAARC facility and up to US$1bn of trade credit from India, of which US$500mn has so far been confirmed for fuel imports), Sri Lanka still has a substantial US$4.1bn external funding gap in 2022 that needs to be filled. With reserves at just US$3.1bn in December (which includes the US$1.5bn PBoC swap and another US$330mn of FX forward positions that eventually need to be repaid), Sri Lanka is likely to run out of reserves by year-end without new financing, a sharp rebound in tourism revenue, a moderation in elevated oil prices, and/or an aggressive policy shift centred on a revenue-based fiscal adjustment and FX devaluation (and more likely some combination of the above).

The CBSL's decision to hike rates by 50bps takes its standing deposit rate to 5.5% and standing lending rate to 6.5%, and is slightly more hawkish than the median forecast for a 25bps hike among the 7 analysts surveyed by Bloomberg. The decision comes amid rising inflation, which reached 12.1% in December amid rising food prices (driven both by high global prices and the government's ban on fertilizer imports, decimating the local harvest). However, core inflation has also risen above the CBSL's 4-6% target, exacerbated by FX shortages caused by the CBSL's defence of an overvalued exchange rate, which trades around LKR250-255/US$ in the parallel market versus an official rate of LKR 201.5/US$. 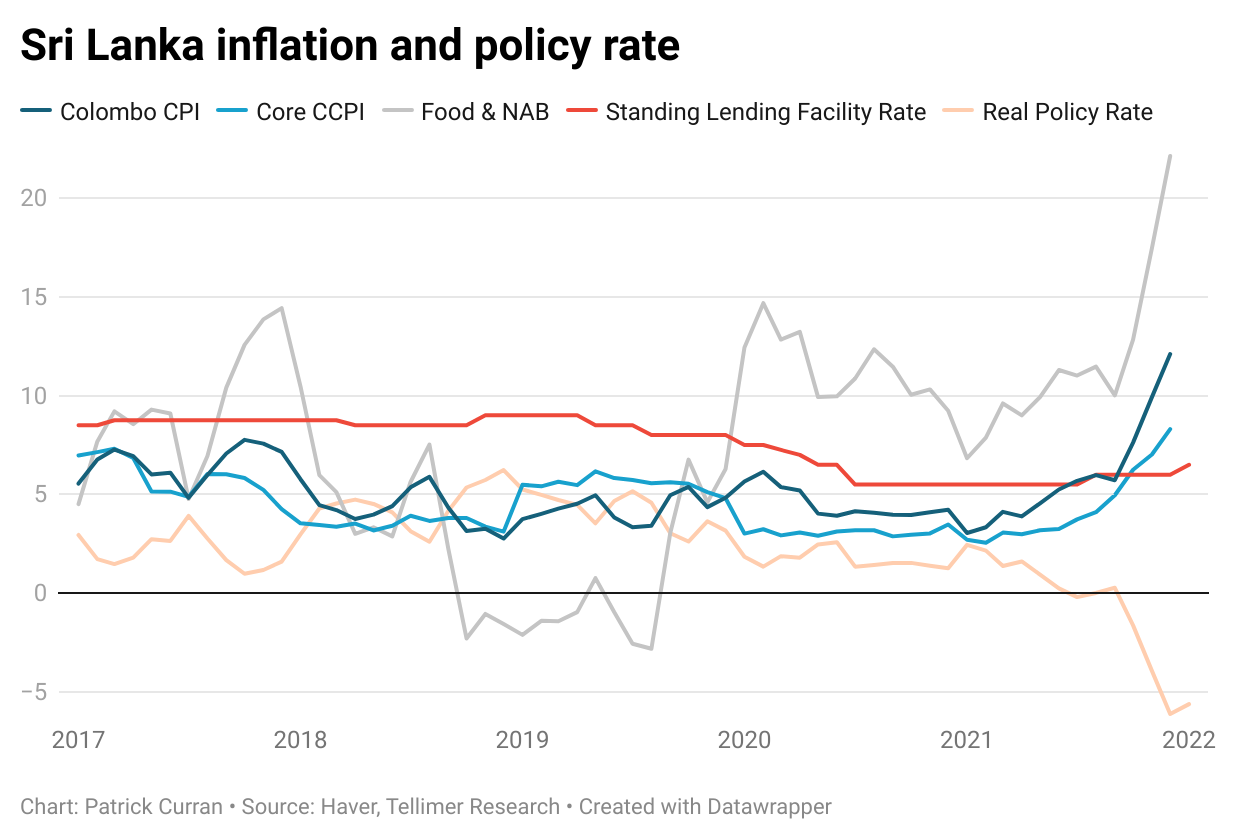 Further, after net CBSL credit to the government rose by LKR1,125bn (6.9% of GDP) in the first 11 months of 2021, the CBSL's daily indicator of Treasury bill and bond holdings showed a large LKR116bn jump between 13 and 19 January, pointing to accelerated monetisation of the budget deficit at the start of the year. Monetisation will continue to put upward pressure on inflation, with M2 growth of 15.1% yoy in November. The loose monetary policy stance has also led to a robust private sector credit growth of 13.6% yoy in November, adding further fuel to inflation.

Against this backdrop, the CBSL's 50bps hike will do little to solve its economic problems. Sri Lanka's real policy rate of -5.6% is among the lowest in EM, many of which have reacted much more aggressively to rising inflation, and without a more flexible exchange rate and curtailed monetisation of the budget deficit Sri Lanka's external crisis will continue unabated. Further, with 3-month T-bills yielding 8.5% in the primary market already, there is a disconnect between the policy rate and prevailing yields that muddies the transmission mechanism.

The CBSL also announced a policy to distribute the financing of essential fuel imports, usually financed by the central bank, among licensed banks in proportion to their FX inflows to ease worsening fuel and electricity shortages (with a key coal plant currently offline and fuel shortages hampering thermal generation). It has also mandated all tourism companies to only accept FX payments, increased the incentive on remittances through formal channels from LKR2 to LKR10 per US$, and extended the remittance incentive through end-April (though with a parallel rate of LKR250/US$, this is unlikely to attract remittances back to formal channels, with a sharp 60% yoy decline in December and 47.5% yoy decline in H2 21).

Overall, the CBSL's tepid response to the prevailing economic crisis will do little to ease crippling FX shortages and reduce the likelihood of default.

Alongside a weak 2022 budget, fresh stimulus package, and continued resistance to an IMF programme, a meaningful policy shift looks unlikely. Further, President Rajapaksa's speech on Tuesday failed to properly diagnose or take responsibility for Sri Lanka's economic crisis, or to lay out any meaningful reforms to tackle it, yet again pointing to a glaring lack of will by the government to implemented needed reforms.

As such, an improved oil and tourism balance and/or ad hoc financing is the only way for Sri Lanka to avoid default in 2022. The frontloaded nature of Sri Lanka's 2022 financing pipeline means that it may well have enough reserves to retire its US$1bn eurobond maturity in July if it so chooses (whether it should is another question), but it will come down to the wire and if it is paid will only worsen Sri Lanka's FX shortages and repayment prospects from H2 22 onwards.

So, while the Sri Lankan authorities may chalk up this week's eurobond payment as a victory, this week's whirlwind of activity in Sri Lanka has failed to fundamentally improve its repayment prospects, instead exacerbating Sri Lanka's FX shortages over the medium term and eroding the value of its longer-dated bonds. We retain our Hold recommendation on Sri Lankan eurobonds beyond the SRILAN 5 ⅞ 07/25/2022s (which are not rated), with default now largely priced in and eurobonds trading in line with recovery value (though there still could be a further drop if and when the default does happen). 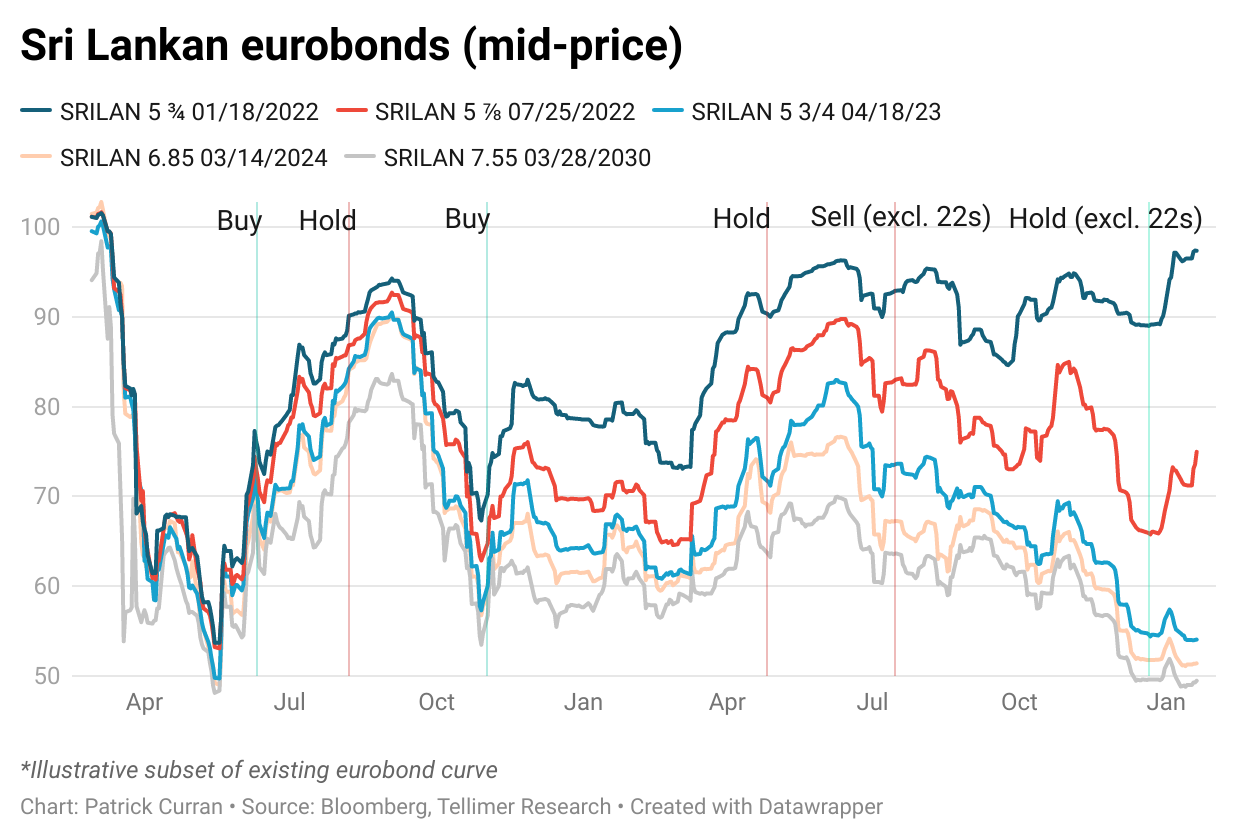