President Ranil Wickremesinghe’s recent comments relating to the potential inclusion of domestic sovereign debt within any financial restructuring programme carry significant implications for investors. We focus here on the impact on the commercial banks, but insurance firms, asset managers, large corporates and wealthy households could also be directly affected. Indeed, non-banks hold around half of the stock of domestic debt.

The knock-on consequences could be severe and should be factored into any policymaker cost-benefit analysis exercise. For example, the Employee’s Provident Fund is the single largest holder of domestic sovereign debt, with over a quarter of total stock. Sri Lankan workers and pensioners would therefore directly suffer a loss in value arising from any domestic debt restructuring.

The mere possibility of such a course of action being taken highlights the difficult situation the country finds itself in after years of economic mismanagement and months of political paralysis. 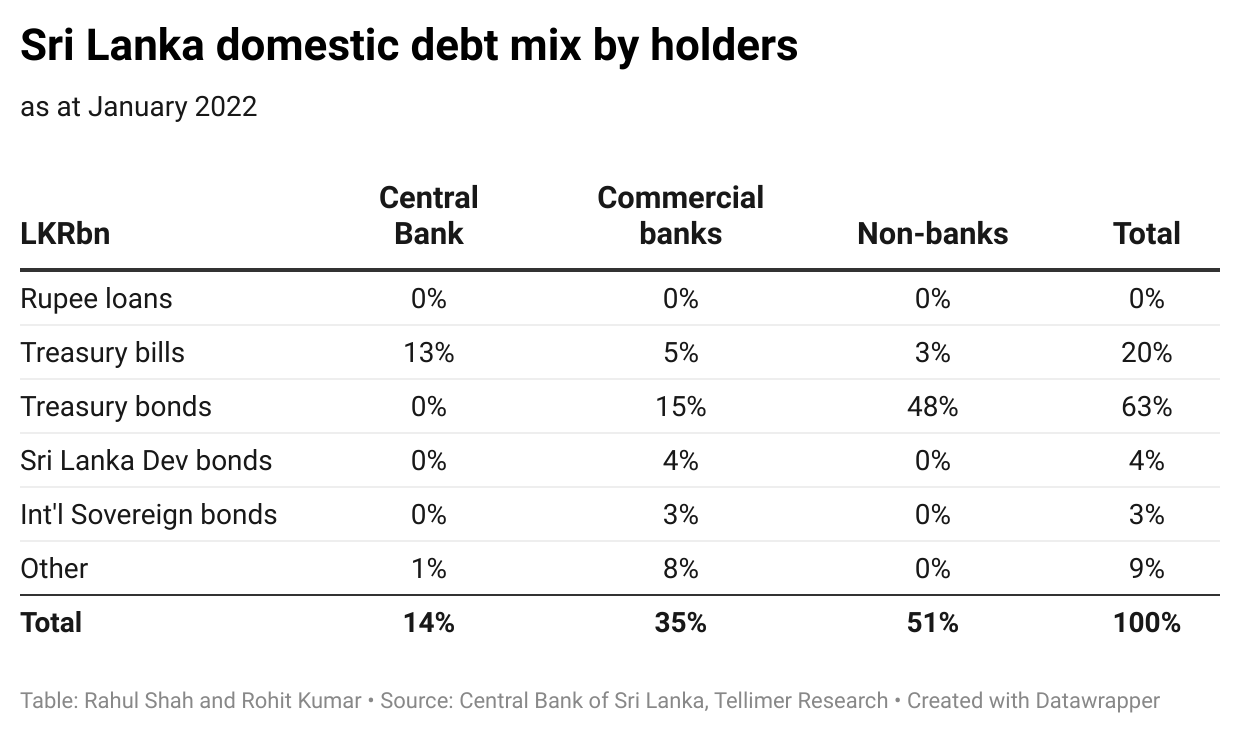 Sri Lanka banks have sizeable exposure to local currency sovereign debt; for the five largest banks (which together account for just over half of the banking system), these investments account for 29% of total assets. A few difficult years, combined with the sharp LKR depreciation, have resulted in limited excess capital; CET1 ratio cushions for these names are typically just 5% points above their regulatory minima, meaning there is only modest capacity to absorb additional losses.

The key takeaway is that, without any regulatory forbearance measures, recapitalisation would begin to be needed once local sovereign debt haircuts exceed around 5%. And once haircuts exceed 14%, all five banks would need to be recapitalised on a one-for-one basis. Our calculations point to a total loss-absorption capacity of LKR220bn; this is almost 30% of the current equity base of these entities, but still translates to just 2% of the stock of total domestic debt.

However, since Q1, the central bank has announced several regulatory forbearance measures, notably the release of the capital conservation buffer, which will reduce the minimum capital ratios the banks must reach by 250bps. Other announced steps including providing banks with a two-year transition window for the recognition of certain mark-to-market losses.

On this basis, recapitalisation of the weakest bank in our top 5 sample would be needed once the debt haircut exceeds 6%. And all five banks would need some recapitalisation only once debt haircuts exceed 20%. The total loss absorption capacity of the banks would be LKR340bn. While this is a 50% increase from the above calculation, it still represents only 3% of total domestic debt stock.

As well as regulatory forbearance, other policymaker actions that would increase the loss absorption capacity of the banking sector include the bail-in of other creditors (such as bondholders and depositors). We explore this theme further below.

Nevertheless, one of the key takeaways of this exercise is that if policymakers do feel the need to restructure domestic debts, the calculus should include the resources required to subsequently recapitalise the banking sector. 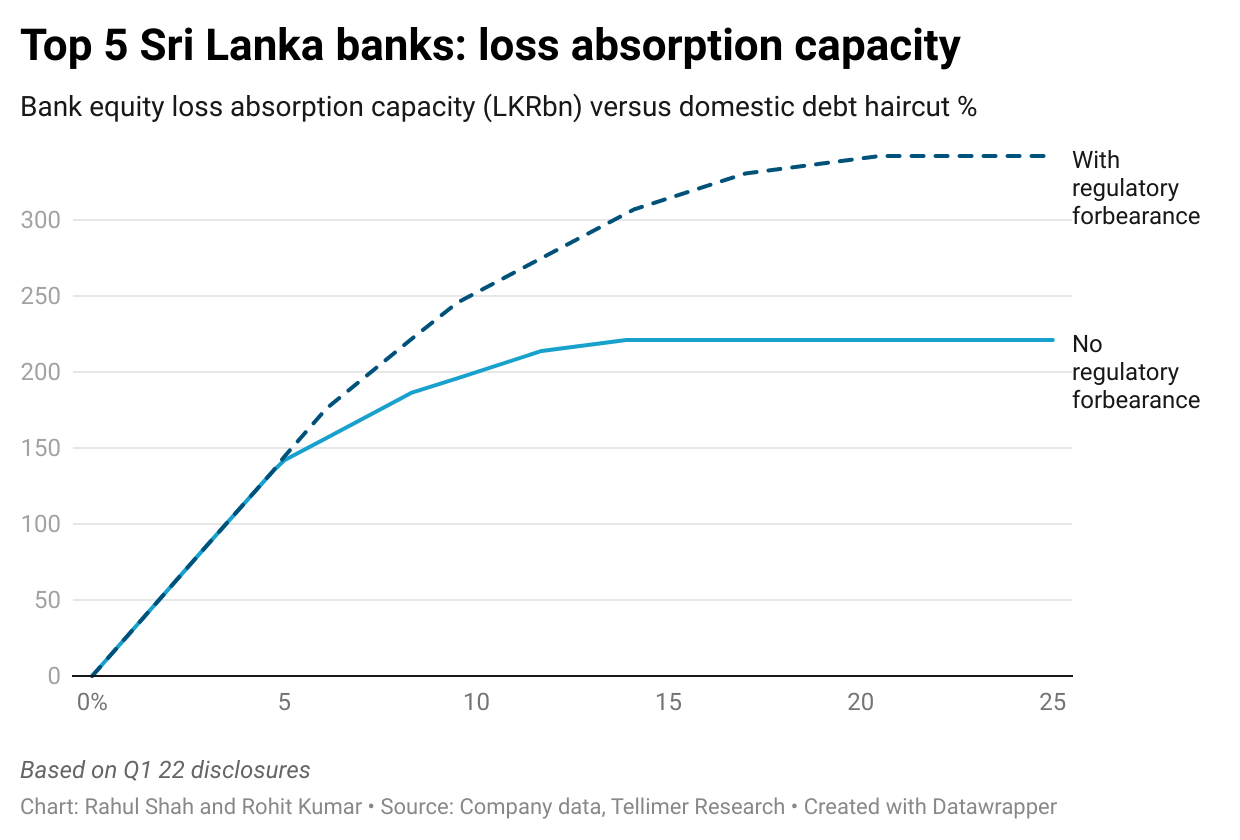 One way to push through a meaningful haircut of domestic debt while reducing the need for large-scale injections of public sector capital into the banking sector would be to force providers of non-equity bank capital to absorb some of these losses. Commercial bank bondholders could be bailed-in, for example (although legal challenges can be expected). In extremis, larger depositors may also be asked to take some of the pain (deposit insurance provides protection up to just LKR600k per depositor). To provide some numbers for context, for the five largest Sri Lanka banks, the volume of deposits is almost 10x the volume of shareholders' equity, while the volume of bonds and other liabilities is almost double that of shareholders' equity.

However, the hazard represented by this scenario could be enough to encourage these funding sources to pre-emptively rush for the exit, leading to a tightening of banking system liquidity and forcing policymakers to show their hand. 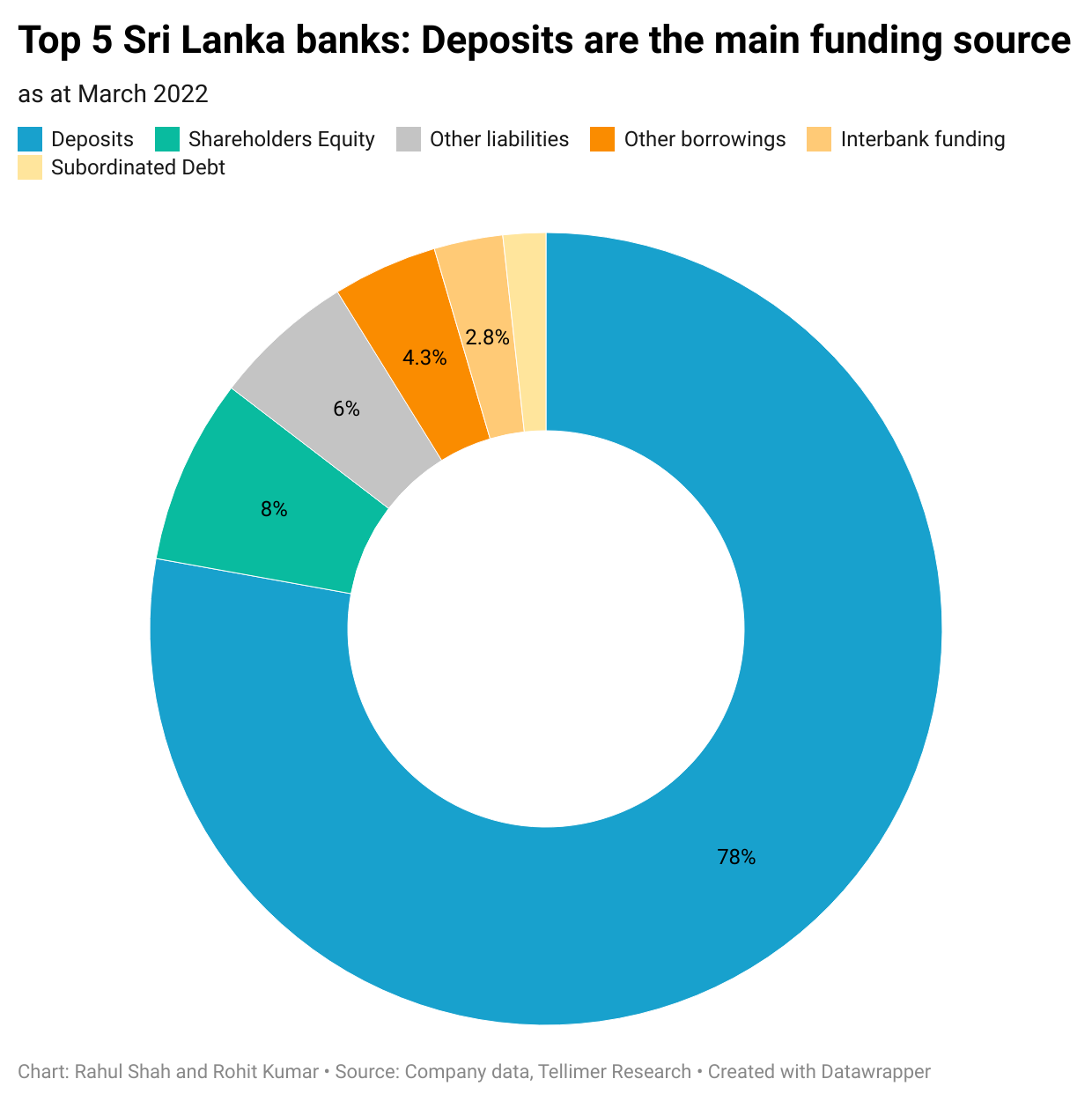 Bank valuations are depressed but likely not factoring in dilutive recapitalisations

For the three listed banks in our sample, share prices are around one-third lower this year, and have roughly halved from their post-pandemic peaks. Price book ratios are also nearly half of their 5-year median levels. So investors are already discounting a fair level of bad news but not, we suspect, a debt restructuring event that demands a heavily dilutive re-capitalisation of the sector. 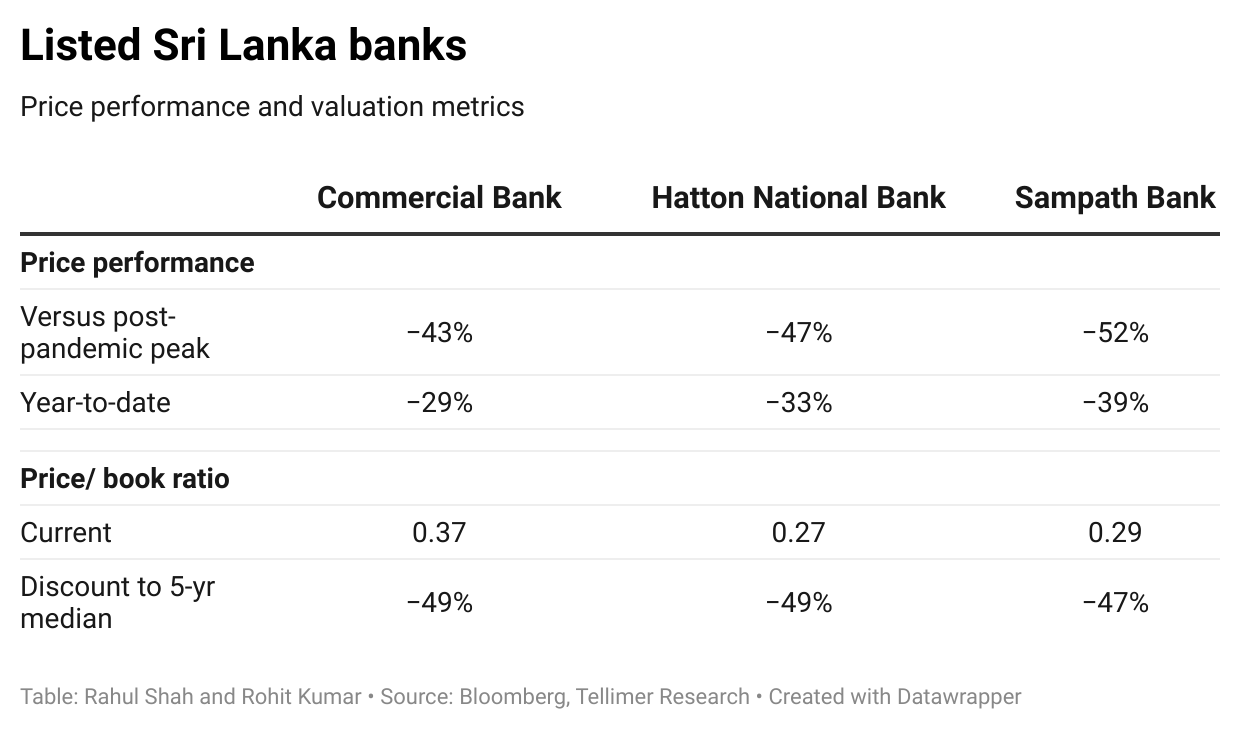 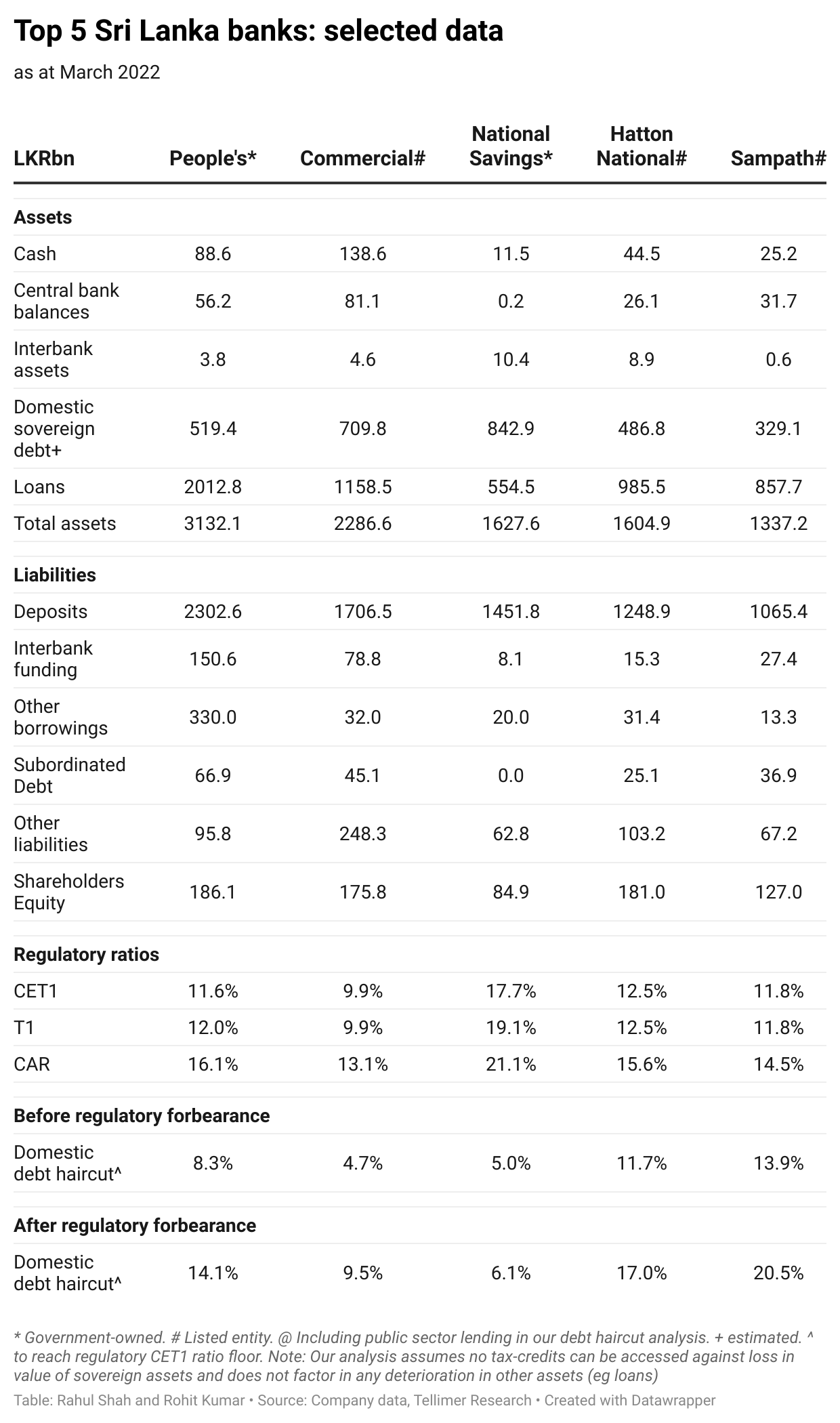