Sri Lanka announced the suspension of debt payments on certain external debt, including its foreign bonds, with immediate effect on 12 April. The government said it is taking this step to preserve reserves as it prepares, with IMF assistance, an economic recovery programme and an “inescapable” comprehensive debt restructuring.

We have long said that restructuring was inevitable (which was confirmed by the government last week), and bonds have adjusted to reflect this view (with most of the curve trading in the high 30s before the announcement), so the announcement does not come as a surprise. Indeed, bonds are largely unchanged on the day, after having dropped c9-10pts across the curve last week and another c0.5-1pts yesterday. 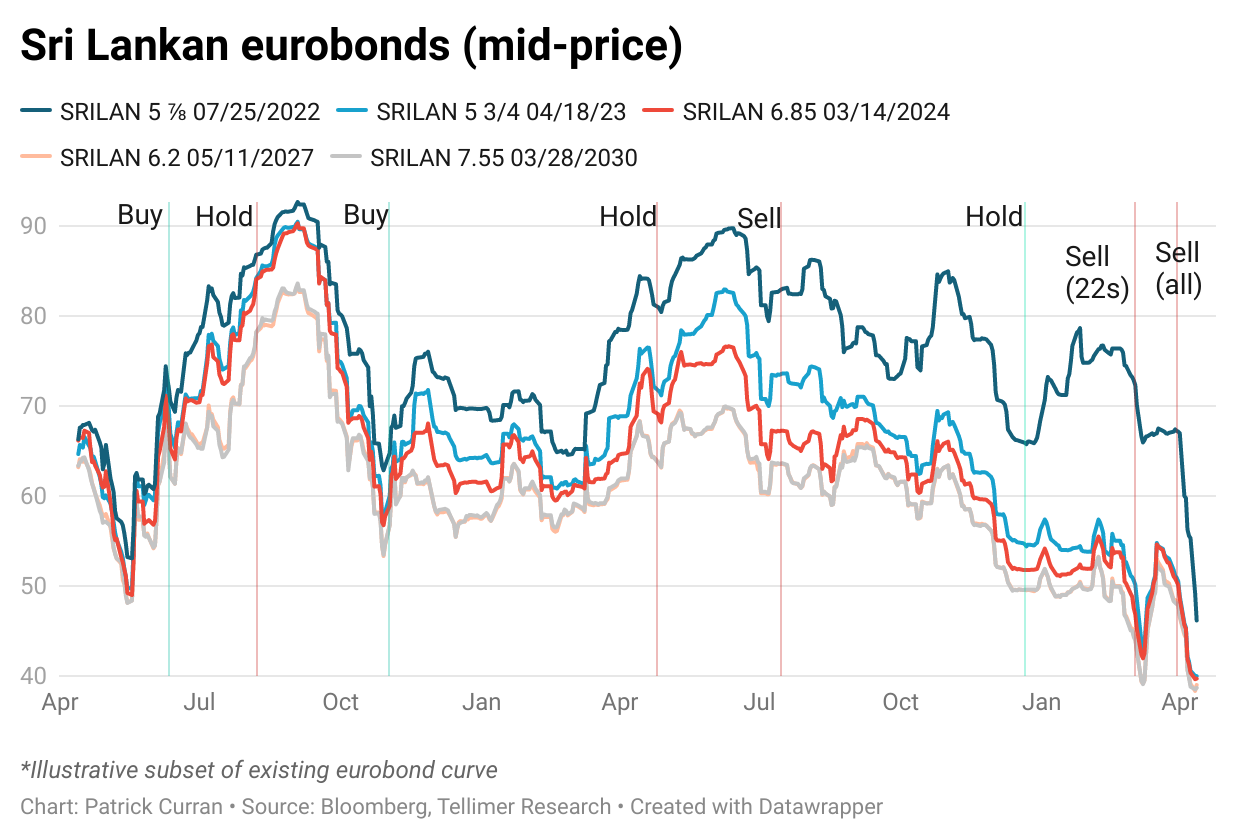 The one exception is the SRILAN 5 ⅞ 07/25/2022s which, even after dropping c12pts last week and another c6pts yesterday, were still trading above US$49 before the announcement. So, while the announcement itself does not come as a surprise, the timing was still up in the air, with uncertainty about whether it would pay the US$1bn maturity in July or the US$78m of coupons due on the ‘23s and ‘28s on 18 April.

The SRILAN 5 ⅞ 07/25/2022s dropped another c3pts on the day, but remain over 6pts above the nearest dated bond (‘23s). As such, we retain our Sell recommendation on the ‘22s until they adjust to trade in line with the rest of the curve.

The announcement promises to “engage in good faith discussions” with creditors under the principles of “inter-creditor equity…and full transparency” and to “advance discussions with the IMF on an economic adjustment program as expeditiously as possible". The announcement also includes a number of specifics that will be of interest to bondholders, including:

Perimeter: The restructuring will include all commercial and bilateral public external debt (excluding Central Bank of Sri Lanka – CBSL – swap lines). External debt is defined as debt that is denominated in a foreign currency and governed by foreign law. This means the SLDBs (US$-denominated bonds issued under local law) will be excluded from the restructuring, which may require greater relief from other creditors to meet the relevant debt thresholds. The statement also implies that domestic debt will be excluded from the restructuring, which will also make it more difficult to bring debt to sustainable levels (domestic debt accounts for c60% of Sri Lanka’s debt stock). The government may still decide to pursue some kind of domestic debt relief in the future, but might be deterred by financial stability concerns (with 40% of bank assets in government debt, and even more at the two major state-owned banks).

Capitalisation: All interest payments falling due from 12 April at 5:00pm (Sri Lanka time) will be capitalised. This implies that the government will not utilise the 30-day grace period for coupons due on 18 April to either complete the restructuring or issue a consent solicitation, which will likely push Sri Lanka into a “hard default” on 18 May. While the restructuring will likely take some time, with coupons of 5.75-7.85pts accruing annually on bonds priced in the high 30s, this will provide some downside protection to creditors in the event of a prolonged restructuring. That said, there is no legal guarantee that missed payments will ultimately be capitalised, so there is still some risk.

Rupee exchange: A bondholder that wishes to receive the LKR equivalent of payments due before the restructuring is completed in lieu of capitalising may request to do so at least a month before the payments fall due, provided it is consistent with the CBSL’s monetary policy and feasible under the relevant credit documentation. With LKR down 37.5% since it was devalued last month, and likely overshooting fundamentals, this may prove attractive. However, the currency could still continue to depreciate (it is trading at a 12% premium in the parallel market), and continued FX shortages will make it difficult to repatriate profits, likely hindering creditors from taking up the offer.

On 8 April, we upgraded Sri Lanka’s eurobond curve (excluding the ‘22s – see above) from Sell to Hold, arguing that the restructuring was largely priced in. While the SRILAN 6.85 03/14/2024s are trading below the estimated base case recovery value of US$49-53 at exit yields of 10-12%, we argued that the political crisis would likely continue to weigh on the bonds and that they would likely dip further when the restructuring was made official, providing a more attractive entry point.

With the restructuring now official, we think bond prices have fully adjusted to reflect this reality. And we are encouraged by the urgency shown by the new economic leadership team, incomplete as it may be, to tighten policy (including last week’s 700bps rate hike, with 12m T-bill yields drifting up by over 11% in the primary market since) and to expedite talks with the IMF and bondholders (with virtual IMF talks expected to start this week).

However, it is still likely to be a long road, exacerbated by political uncertainty, with the Rajapaksa brothers still refusing to step down as protests mount. While bondholders will receive some downside protection if negotiations drag out if interest is capitalised, prolonged delays will also make for a more onerous starting point and political risk will raise exit yields, potentially eroding recovery values.

That said, we prefer to wait until there is greater certainty on the political outlook before upgrading our recommendation, and bonds could still dip further when the default becomes official (eg at the end of the 30-day grace period on 18 May) and when the rating agencies downgrade to "selective default", potentially prompting some forced selling.