Sovereign defaults in 2020: Experience and lessons

We've seen a record number of sovereign defaults on bonded (external) debt this year according to our records, at least in terms of recent history, although it was becoming obvious we were heading for a record even by the middle of the year. We count six countries and seven default events.

Most (four countries, five events) are in Latin America (Argentina, Belize, Ecuador, Suriname x2), with one in the Middle East (Lebanon) and one in Africa (Zambia). Zambia became the first county in Sub-Saharan Africa to default on its bonds since Covid, and the first proper African bond default since Mozambique in 2017. 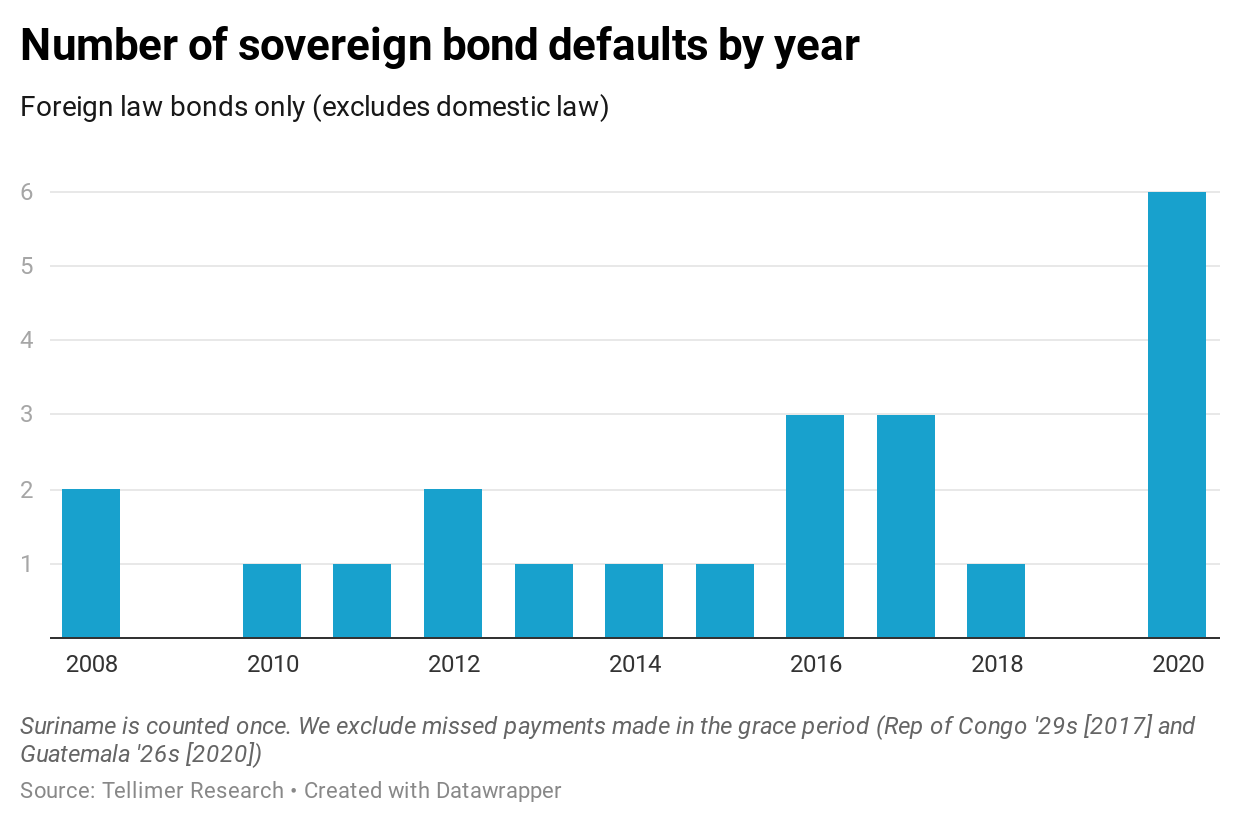 However, we don’t think the pandemic is to blame for this rash of defaults. While it may appear, on the surface, that there is a strong correlation between default and the pandemic, many of these defaults would have happened anyway. Indeed, Lebanon’s occurred before the global Covid crisis really began. Argentina was already heading for a strategic default, a decision that was rubber-stamped by an IMF statement in February. And while Zambia may present itself as a Covid default, as it seeks sympathy from lenders, it was more likely the straw that broke the camel’s back; the only real surprise is that Zambia lasted this long. Suriname also had pre-existing vulnerabilities evidenced by its expensive short-term financing in December last year (priced to yield 12.6%).

There may have been two defaults that may be more directly attributed to the impact of Covid. First, Ecuador. Although already on a knife-edge, and exposed by the collapse in oil prices, willingness and policy implementation under the IMF programme was strong. After all, the IMF approved the joint second and third reviews of the EFF as recently as December 2019, although it was a struggle. Three months later they were in default. Second, Belize, due to the impact of global lockdowns on the tourism market, a key driver of its economy, although investors also know Belize is a serial defaulter while other small tourist-dependent economies haven’t defaulted (eg Seychelles, the Maldives).

For a summary of the circumstances around the defaults, see the table.

There are two points to note. First, including Guatemala’s missed coupon on the ‘26s on 3 November would make seven countries, although the payment was made during the grace period, so we don’t count it as a default here (both S&P and Fitch took rating actions in response to the missed payment). The non-payment was a consequence of legal action by a contractor in a payment dispute. Second, we also exclude defaults on other commercial debt (there are ones we know about, eg Chad reportedly sought a suspension of payments on oil-backed loans, possibly Angola too, and there may be others we do not know about or where there have been requests for loan waivers).

That there haven’t been even more bond defaults, in the face of international calls for debt relief, especially for low-income countries, may be more of a surprise. According to the World Bank, 44 countries (60% of those eligible) have participated in the G20’s debt service suspension initiative (DSSI) to defer debt service payments on bilateral debt, of which 36 have signed an agreement with the Paris Club (see here). Participation by private creditors has been low, however, much to the official sector’s chagrin. Low take-up reflects, in part, issuer concerns about the implications for their credit rating and limitations that are imposed on commercial borrowing (see here). Only three countries are said to have sought comparable relief from commercial creditors (Zambia we know of, maybe the others include Chad and Grenada, although Grenada quickly back-tracked). So, among the six sovereign defaulters this year, five have happened outside DSSI.

This also means that there are now three on-going bond default cases – Lebanon and Zambia join Venezuela (four if we include Suriname).

That these defaults were not a huge surprise was reflected in their ratings in advance. Four of these countries had ratings in the CCC or below category at the end of last year, the exceptions being Belize and Ecuador, which implies a high probability of default.

There are two further observations. First, two defaults (a third of the total) followed a change of government – Argentina and Suriname.

Second, none of these defaulting countries had a live IMF programme at the time, although that might be in part because debt restructuring (PSI) was a prior action for continuing IMF support in some cases (Argentina and Ecuador, as existing programmes went off-track) or new IMF support in others with unsustainable debt burdens either before Covid (Lebanon, Zambia) or after (Suriname). Ecuador negotiated a new programme during its temporary standstill. Lebanon, Suriname and Zambia are essentially trying to do the same, although with varying degrees of success so far. Of the six, only one (Ecuador) now has an IMF programme. While therefore the IMF may appear 'absent', we think it is playing a key role behind the scenes, although its role in the Argentina restructuring may have dented its credibility. 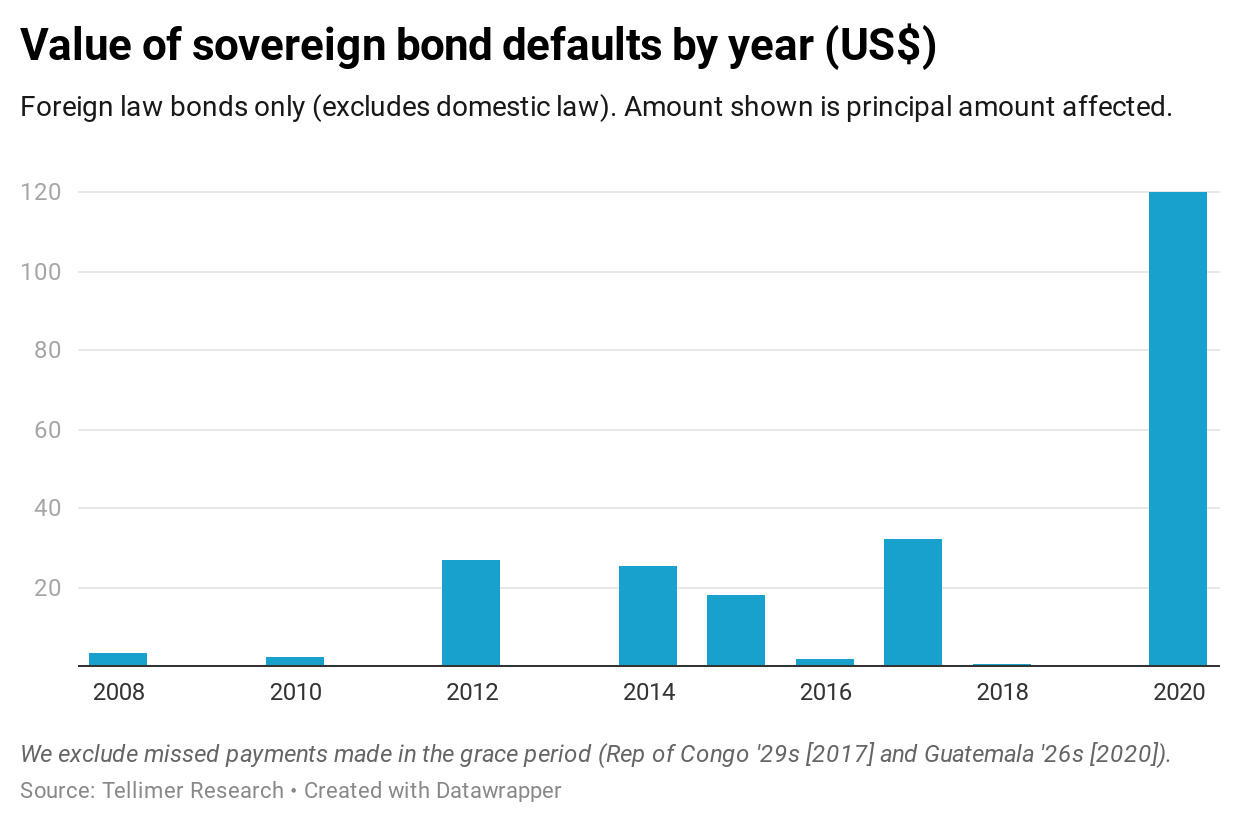 The number of bond defaults comfortably exceeds what we’ve seen over the last decade. Since the GFC, there has been on average c1.3 defaults per year. We had seen 3 each however over both 2016 and 2017. And the number of defaults (and the principal value to which it covers) is much higher than we saw during the GFC (when there were just two - Ecuador and Seychelles).

One reason why we may be seeing more countries in default (or distress) compared with the global financial crisis (GFC), or the general experience over much of the past decade, is that the universe of countries with bonded debt is simply much bigger than before, after all the issuance from new markets that haven’t previously issued (frontier markets), which by definition tend to be smaller, more vulnerable countries. That is, we didn’t see so many defaults during the GFC as the frontier universe was much smaller back then and the issuers that did exist at the time were generally more established in the market. Most of today’s frontier bonds were issued in 2012-14, a period when frontier issuance exploded – we reckon there were some 14 debuts over this period, c40% of all frontier debuts since 2007 (if we date the birth of the frontier bond market to 2007, marked by debuts from Ghana and Gabon). And, as the typical debut is a 10-year tenor, most of the bonds haven’t come due yet.

Of course, the problem with that line of reasoning is that only two of the six defaulters this year are frontiers that have issued since the GFC (Zambia debuted in 2012 and Suriname debuted in 2016). The other four (Argentina, Belize, Ecuador and Lebanon) have had a market presence for a much longer time (they are not new kids on the block who don’t know any better), although three (Argentina, Belize and Ecuador) are serial defaulters.

In fact, the strong willingness to pay of frontier sovereigns during this crisis, and therefore lack of defaults, should be a strong signal in support of the asset class. 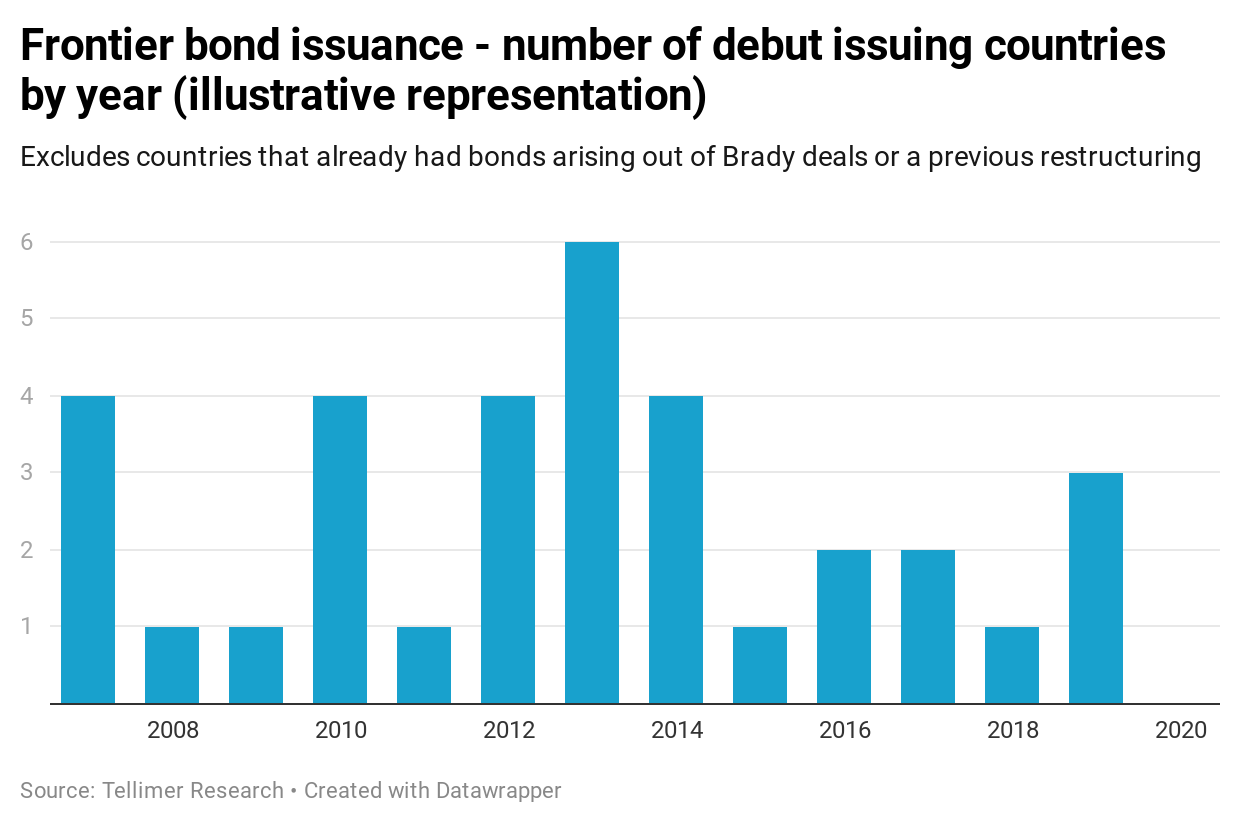 One way to look at this is to look at sovereign ratings. There are nine countries with ratings in the CCC-rating bucket or below, across the three main agencies, excluding this year's default cases and Venezuela (see table). The probability of default for a country in the CCC territory is quite high. The one-year implied probability of default for a country rated in the C-CCC category is 26.5%, according to Fitch (the default probabilities for the other agencies may differ).

Of these nine, the most likely default candidates in our view are Laos and the Maldives. We assign a much lower probability of default in the cases of Sri Lanka and Mozambique (we have Buys on both). We think Angola should be ok unless the IMF programme goes off-track and/or oil prices plummet again. 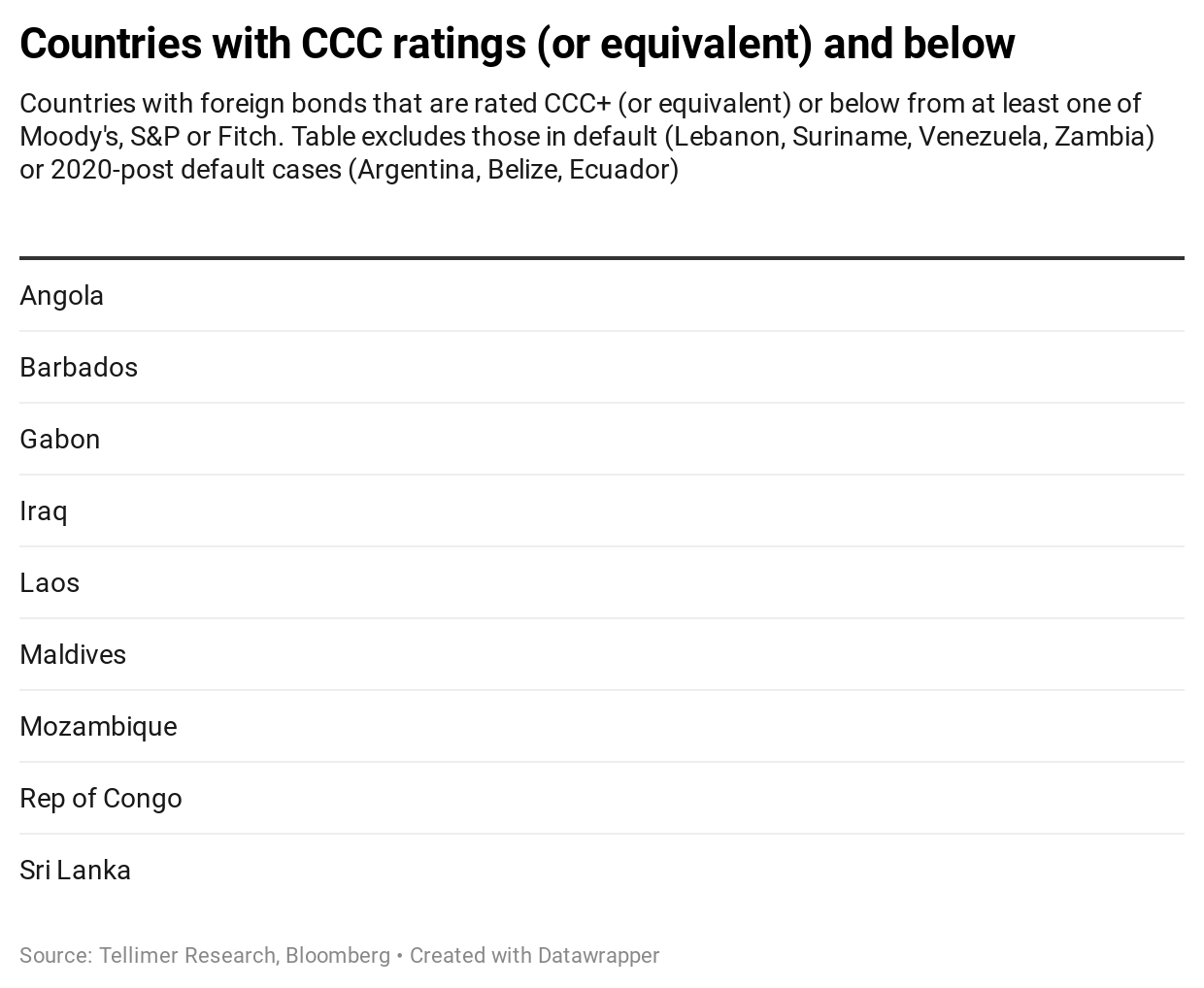 But nor do we expect a wave of sovereign defaults, or a systemic crisis. The defaults we’ve seen have mostly been well flagged and are idiosyncratic, and, for every Argentina or Belize, there are many others that demonstrate a much stronger willingness to pay or ownership over an economic adjustment programme. That said, as noted above, frontier markets face a funding cliff over 2022-24 with a heavy maturity profile, as that is when a lot of the bonds that were issued in the first wave come due.

We highlight some market trends or other features of the default experience this year. Crucially, this year has seen a test of the existing financial architecture in terms of the use and design of collective action clauses (CACs) and the treatment of bilateral debt, which may have lessons for the future. 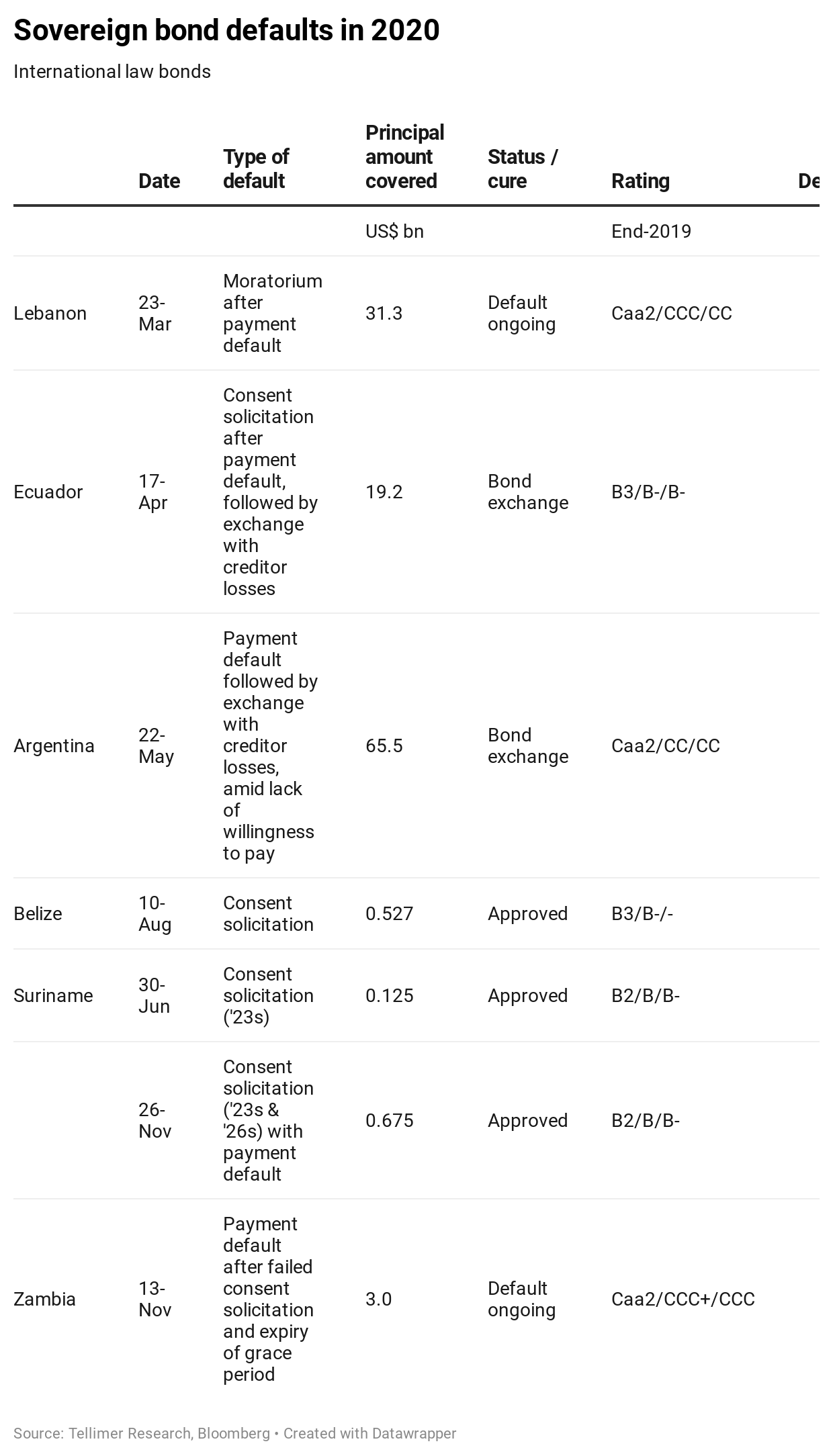