The final week of the third quarter will be a busy one, with investors keeping an eye on fresh economic data and surging oil prices that will aggravate the recent hawkish turn by some major central banks and heightened concerns of inflation remaining elevated in Southern Africa.

With first tier economic data scheduled for later in the week, investors will turn their attention to Botswana’s Q2 GDP print. What was initially a V-shaped recovery has transpired into more of a K-shaped recovery as different sectors of the economy recover at different rates, but also due to Q1’s revised and rebased annual GDP figures by the Botswana Statistics Office. Accommodation and food services are expected to continue to suffer the most due to the impact of measures put in place to combat the spread of the COVID-19 pandemic in the early parts of the year. But a more significant worrying element is that mining and quarrying, manufacturing and construction sector are still lagging. These sectors are not only behind the Q1 figures of 2020 but also behind the Q1 figures of 2019. Readers can expect a more pronounced Q2 GDP figure, thanks to the resumption of economic activity and a strong diamond sector recovery, which is expected to lead to a material improvement of fiscal and external performance over the next two years.

On Thursday, Zambia is set to publish its September inflation report, which is expected to decelerate at a quicker pace and edge closer to the Bank of Zambia’s (BoZ) target range that was earlier envisaged in the May 2021 MPC meeting, mostly on account of the favourable outlook for the exchange rate and improved prospects for fiscal consolidation. A sustained slowdown in inflation will ease policymakers' pressure to normalise monetary policy settings.

In South Africa, the data card heats up with the usual monthly data deluge of money supply, PSCE, trade and government finance scheduled. In addition, there will be the SARB Quarterly Bulletin alongside the release of some Quarterly Employment Statistics (QES). The week's reports will hold insights for the state of the economy in Q2, with the Quarterly Bulletin holding summary and more granular statistics for the SA economy, trade, and various other indicators. The Quarterly Employment Statistics (QES) will also hold significance in assessing the state of the labour market in Q2, with the unemployment rate rising to a record level according to a prior report. The data will hold significance for those looking for a more granular assessment of government and private business conditions. The report is split up into sectoral figures, including government and non-government sectors, detailing employment counts and total wages. Signs of continued weakness in the private sector will be a concern for tax sustainability, with the shrinking middle class under severe pressure amid government restrictions on the movement of people. 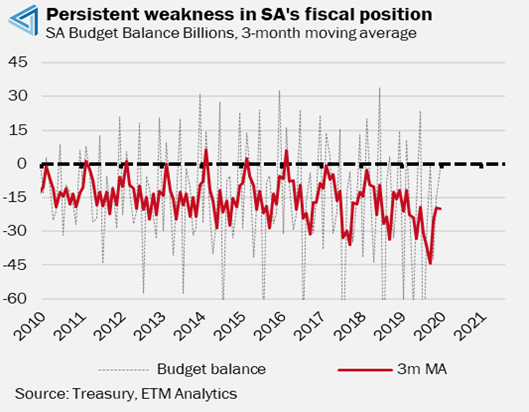 On the fiscal front, SA’s July budget data showed that the budget balance swung from a record surplus of R63.1bn in June to a deficit of R133.2bn in July, its widest in a year. While on a cumulative basis, the deficit narrowed in comparison to the comparable period a year earlier and should continue to do so as lockdown restrictions are eased further to allow for economic activities to resume, many headwinds remain. Revenue remains constrained by a shrinking tax base and weak economic growth. Meanwhile, a strong leaning towards populist policies continues to underpin elevated levels of expenditure. At the risk of sounding like a broken record, SA's fiscal trajectory remains extremely weak despite the recent lower deficit forecast by NT. Unless major reforms are implemented, a crisis scenario will continue to play out in the years ahead.

·The Evergrande saga is set to continue after the Chinese property giant did not pay $83.5mn in bond interest to its offshore bondholders last week, leaving global investors wondering if they will have to swallow significant losses when the 30-day grace period ends.

On the economic data front, it will be a busy week in the US. However, most of the data will take a backseat to politics and corporate updates that might show further expectations that pricing pressures remain elevated and will be passed onto the US consumer. The most important economic reading will be the ISM manufacturing reading which could show a slight deceleration in September. A steeper drop with the headline and higher prices paid could weigh on growth expectations for the rest of the year.

Concerning politics, Thursday will see a $1.0trln bi-partisan infrastructure package head for a vote in the House of Representatives, and it will pass. After that, it will head to the Senate, where again it is expected to pass. It has been scheduled to pass on the day that the surface transportation authorisation expires. Although some within the Democrat party would like the larger $3.5trln package attached to this, others felt that this could pass on its own merit regardless of the progress on the larger package. The larger package would need more negotiation, and judging from the language used, it is highly probable that the size will be shrunk to build the requisite consensus within the Democrats own party. The Republicans, on the other hand, will seek to stymie the larger bill, given that passing it will result in a higher tax burden on the private sector.

In the Euro area, the economic calendar mainly consists of survey data with CPI in focus on Thursday. Eurozone inflation shot up in August, rising to 3.0% y/y from 2.2% prior, with clothing and household goods prices the main drivers in August's jump. Meanwhile, inflationary pressure from gas and electricity prices also strengthened and is likely to keep inflation on the rise in the coming months. As it stands, inflation is well above the ECB's 2% target level, which will be adding to hawkish policymakers' calls for an end to the super accommodative policy.

In the FX market, the South African Rand (ZAR) is taking a bigger hit than most of its emerging-market peers as an energy crisis, and Chinese growth concerns batter the ZAR and worsen the country’s inflation outlook. The Rand declined for a second day on Monday after resuming trade from a public holiday on Friday to touch its weakest level (15.060/USD) in more than a month. A rise in oil prices would fuel price increases across the economy, complicating the central bank’s task as it tries to keep inflation in check without stifling a tentative recovery from the pandemic-induced contraction. For as long as the SARB holds out on joining global monetary tightening cycles, the ZAR will have limited resilience to broader market movements, with yield differentials being squeezed and the ZAR becoming less attractive for carry trade investors. 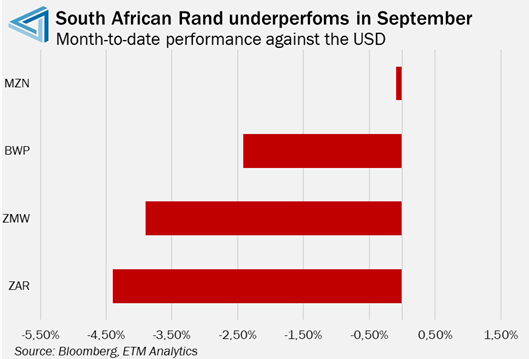 The cautious sentiment supports the trade-weighted USD (DXY), which has been probing the 93.500 ceiling, a break that could see the DXY revisit Augusts’ 93.730 high. This will result in the Southern African currencies experiencing some modest selling pressure. Notably, the Zambian Kwacha (ZMW) and the Botswana Pula (BWP) and the Mozambique New Metical (MZN) were the worst performers in Africa at the start of the week.

As the final week of September draws near, the MZN has depreciated a marginal 0.1% against the USD, performing better than its counterparts, including the ZAR, which has recorded heavy losses of 4.4% so far. It is worth pointing out that the MZN has traded in a consolidated manner against the USD for almost three months. Although there is a modest bearish bias in the MZN when looking at the currency's near-term performance, the local unit's broader bias this year is bullish, with the MZN still Africa’s second-best performing currency against the USD in 2021. The broader bullish bias in the MZN is partly being underpinned by the prudent monetary policy stance of the Bank of Mozambique, with the country running one of the highest real interest rates in the world.

Investors can expect to see the month-end data and USD flows to influence the currencies in what has been a dismal month for Southern African currencies.