This week offers a broad selection of data out of South Africa, alongside tier-three releases from Zambia and Mozambique. Needless to say, Southern African markets will have a lot to digest this week. For SA, the usual month-end data releases hold focus with core money supply, private sector borrowing, the government budget, and trade numbers, amongst many others, are all up for release. The data holds significance in assessing SA's overall growth cycle mid-way through the third quarter and, therefore, has value for monetary policy guidance and expectations.

Given this context, a key data print will be SA’s trade dynamics, given how it influences the South African Rand (ZAR) and inflationary pressure within the economy. SA’s trade fundamentals have strengthened considerably over the past year, backed by high export prices stemming from commodities and generally supportive global trade conditions. There are, however, still headwinds facing SA’s external trade, such as the fast-spreading Delta variant and the reintroduction of restrictions, which continues to weigh on supply chains. Imports, meanwhile, are gaining traction amid the rebound in domestic demand, but not enough to considerably outweigh exports and shift the trade account back into a deficit. Therefore, SA’s trade dynamics are likely to remain relatively robust, even if exports start to ease up amid softening commodity prices. This will provide the ZAR with a cushion against any external shocks or tightening of global financial conditions. 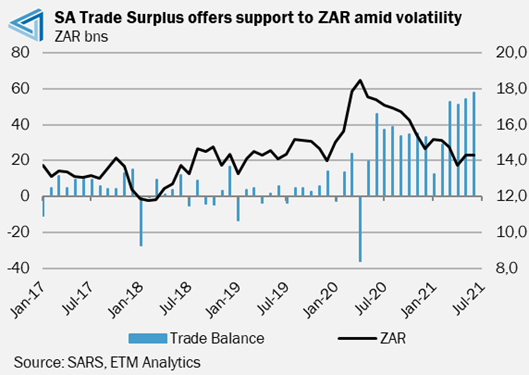 Elsewhere in Southern Africa, manufacturing PMI surveys will be in the spotlight and should point to another month of fading manufacturing growth rates. With exception to a slight increase in Zambia’s private sector in July, SA and Mozambique declined sharply, holding just above the neutral 50-point mark owing to the broad-based economic fallout of tighter pandemic-related lockdown restrictions that disrupted supply chains through the month. With the degree of confidence in the future output growth weakening, the rebound in the private economy is likely to be weak for both SA and Mozambique. Although restrictions have been lifted since then, a resumption of economic activity should support the index reading. That said, the respective economies will likely take some time to recover fully, and as such, prospects of a sustained and meaningful recovery appear limited amid ongoing headwinds and challenges.

Zimbabwe's trade development and promotion agency, ZimTrade, is increasing its trade programmes to strengthen linkages between Zimbabwean exporters and buyers from regional markets. The agency has urged domestic farmers to tap into the $1,7mn Bambara nuts export market covering countries like the USA, UK and the Netherlands, among others. "Although Zimbabwe's exports of the product are still low, the current market share indicates potential for the country to command a much bigger market share," said ZimTrade in a recent update on its export figures. "From these markets, Zimbabwe already enjoys trading relations with most of them and has even easier access to South Africa, which is the second-largest importer of Bambara beans in the world," the update said.

Now that the Jackson Hole Symposium has been concluded, the focus shifts back onto the economic recovery with Federal Reserve Chair Jerome Powell’s lack of commitment to a taper timeline and his pledge to assess incoming data carefully. As such, investors will pay close attention to every data point to give possible insights into the labour market recovery and if pricing pressures continue to heat up. With the timing and conviction of the Fed’s taper in the months ahead dependent on the recovery of the US labour market, investors will keep a close eye on upcoming ADP employment change data. Consensus expectations for the August print point to a substantial increase in the number of jobs added in the US economy, as the reopening continued despite concerns over the resurgence of COVID-19 in the States. This will support a rise in consumptive demand and inflationary pressure, especially if lawmakers give the Biden administration’s fiscal stimulus package the green light.

The start of the new week has seen risk assets take the likely upcoming US Fed tapering in their stride. A mildly more dovish comment from the Fed has provided a catalyst for a change in sentiment and translated into a sharp retreat in the USD. Emerging market currencies are likely to extend their gains in the final stretch of the month, but this may depend on new economic data, which can alter the narrative. Specifically, the release of the US payrolls data later this week may prevent the USD from retreating wholesale and undermine the rally in EM currencies. Should the labour market data this week miss expectations, the USD will find itself further on the defensive.

The broadly buoyant sentiment across financial markets has offered Southern Africa currencies some reprieve, as they trade positively against the USD. In light of some market closures in parts of Africa, trading volumes have been somewhat thinner than usual and subsequently has seen the Southern African currencies outperform their regional peers early on in the week. The Botswana Pula (BWP) led the charge higher, gaining almost 1%, followed closely by the South African Rand (ZAR) and the Zambian Kwacha (ZMW). The Mozambique Metical (MZN) has been the laggard for a back-to-back week.

In the current quarter so far, the clear outperformer in Southern Africa and Africa as a whole has been the ZMW, up a near 43%. Amongst this significant gain, 20% of the appreciation has stemmed from the announcement of Hichilema’s election victory on Aug 16. The kwacha is currently trading below the 16.00/USD mark, its strongest level against the dollar since March 2020. The rally has been bolstered by the Finance Minister’s comments to restructure its external debt.

On the other end of the spectrum, the ZAR has fared the worst among its regional currencies this quarter, down 1.46%. The winds are turning back in favour of the ZAR, as it challenges a technical support of around 14.600/USD, the first test for the ZAR bulls. More broadly, the USD-ZAR remains within a more expansive, up-trending channel, of which the base around 14.5500 has now come into view. The plethora of SA data this week will impact the spot.

Readers are also reminded that markets will have month-end flows to contend with, which could drive some profit-taking after last week’s strong risk rally.

In the fixed income market, sentiment towards Zambia continues to improve amid growing hopes that the Hichilema administration will be able to put the country back on a sustainable debt trajectory. Speaking on Friday, Zambia's newly-appointed Finance Minister Situmbeko Musokotwane pledged to conclude talks with the IMF on a lending program by October. The market has reacted positively to the appointment of Musokotwane, who was Finance Minister from 2008 to 2011, amid expectations that he will be able to rein in spending and narrow Zambia’s massive budget deficit. 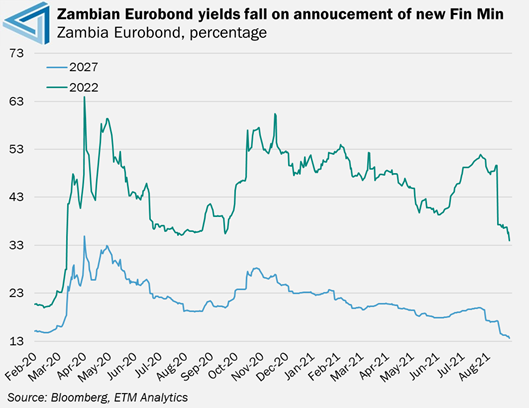 Musokotwane said in an interview after his appointment that unless the ministry does something to the budget, the budget will be mainly for paying salaries and also servicing debt, adding that there will be nothing left over to invest in developing the country. When questioned about how he plans to deal with the country's $12bn external debt pile, Musokotwane said, "the answer is to talk to the people we owe money so that we can pay at a slower pace stretched over a longer period."

Note that newly elected Finance Minister Musokotwane held positions with the International Monetary Fund and World Bank and is already seen as a safer pair of hands to guide the country back to a position of fiscal sustainability. The first major hurdle for Musokotwane to overcome is to strike a deal with the IMF, which would provide fiscal relief for the country that became the first African nation in the COVID-era to default.

Looking ahead, the challenge that Musokotwane has ahead of himself can’t be understated. That said, the market clearly backs the new Finance Minister. However, the market will need to see concrete evidence that Musokotwane is steering the country towards a sustainable fiscal position for the bullish bias to remain entrenched. For now, we see room for further strengthening in Zambian Eurobonds.