May PMI data out of Mozambique, South Africa, and Zambia in the week ahead will offer further insight into the extent of recovery in the respective economies. For Zambia, it is worth noting that at 50.1 in April, the improvement in the health of the private sector was fractional, and going forward, it remains to be seen whether the rebound will be sustained. Slow progress on the vaccination front and the threat of a third wave of the coronavirus pandemic pose downside risks in the coming months. 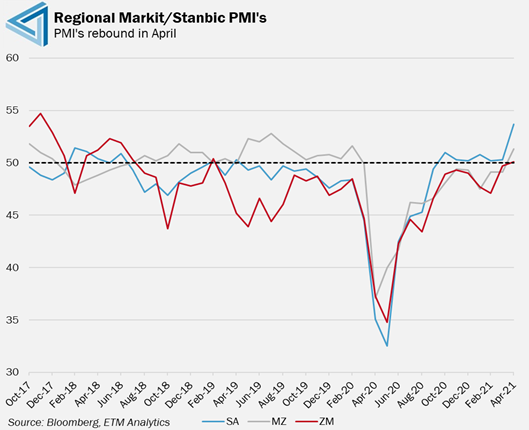 In South Africa, the Standard Bank PMI has spent the last seven months in expansionary territory, reflecting a continued improvement in economic activity as operating conditions gradually normalise and underlying drivers of demand improve. Should SA avoid additional and more draconian lockdown measures in the months ahead and the vaccination rollout accelerates, the economy will continue to recover through 2021 and 2022 before structural constraints begin to set in once more in the continued absence of growth-enhancing reforms. For the May PMI reading, expectations are that we could see it dip as the pace of growth from month to month may start to slow.

In addition to the Standard Bank PMI reading in South Africa, the week ahead will also feature a host of important with private sector credit, money supply, and trade the major releases at the start of the week. When looking past base effects, the former is expected to show credit growth remains weak in SA with a sustained rise in inflation not looking likely anytime soon. The trade balance numbers, meanwhile, are expected to show a slight narrowing of SA’s surplus from the all-time highs recorded at the end of Q1, although high commodity prices are keeping exports buoyed, while imports remain relatively subdued amid SA’s sluggish economic recovery. As such, SA’s trade dynamics are likely to remain ZAR-supportive in the near term, further supporting the currency’s bullish bias into H2.

There will also be vehicle sales, unemployment, the ABSA PMI, and some bond auctions for investors to digest through the week. We expect them to generally reinforce the SARB’s resolve to hold rates low for the foreseeable future.

On the news front, the Centre for Public Integrity (CIP) said in a report released on Friday that the hidden debt scandal has already cost Mozambique $11bn and has placed as many as 2mn people in poverty. The hidden debt scandal resulted from illicit loans of more than $2bn from the Credit Suisse and VTB of Russia in 2013 and 2014 to three fraudulent Mozambican companies, namely Proindicus, Ematum, and Mozambique Asset Management. Recall that the loans were only granted due to the then government providing loan guarantees, which violated Mozambique’s constitution. The approval of the loan guarantees has been pinned on former Finance Minister Manuel Chang, who is currently sitting in jail in South Africa.

Meanwhile, President Ramaphosa announced last night that  SA’s lockdown would be adjusted to level two from today, meaning the curfew will be extended to 23:00-04:00 and public gatherings will be limited to 100 people inside and 250 outside. These restrictions are a far cry away from the draconian lockdown measures implemented last year and are therefore also likely to have a much less devastating impact on economic activity in the country.

On the global front, macroeconomic releases are also likely to be market-moving this week. German CPI, cross-country PMI data, and an RBA’s rate decision will keep investors busy ahead of the latest US jobs report and could drive some market volatility in the event of upsets. Investors are sensitive to the idea that the Fed could be forced to hike rates quicker than it would like to, and in this context, upside surprises to inflation and growth could be very USD supportive.

The jobs numbers will hold particular sway as they will have implications for the looseness of both monetary and fiscal policy in the months ahead.

The month of May has been a mixed bag for currencies in the Southern African FX complex. While the ZAR (+5.56%) and BWP (+2.28%) are trading in the green against the USD on a month-to-date basis, the MZN and ZMW are on the defensive. The ZAR has outperformed its peers, underpinned by supportive trade dynamics and ultra-accommodative monetary policy abroad. 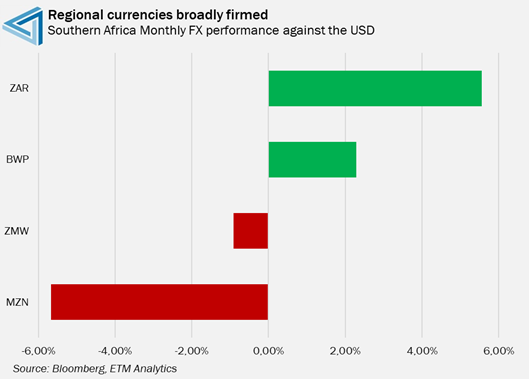 The MZN has been the laggard in the region, having reversed a notable chunk of its gains made earlier in the year. That said, it nevertheless remains Africa’s best-performing currency against the USD as the central bank’s prudent monetary policy, which has translated into high real interest rates, has helped support the local unit.

The Kwacha, meanwhile, is on course to record its 11th straight monthly loss. While copper prices have rallied, the Kwacha has been unable to fully capitalize as demand for hard currency and pressure on debt servicing continues to weigh. Therefore, the Kwacha has traded at record lows and is likely to continue to do so in the near term.

After recovering late last week, it is interesting to note how the USD failed to sustain its gains. Investors remain overwhelmingly bearish on the USD in their 6-12m outlook and are still using any rallies to sell into. Intra-day, there is unlikely to be much in the way of direction generated with the US celebrating Memorial Day as many take a long weekend. This should leave most currencies in range trading mode, digesting all the economic and Covid developments of the past few trading sessions. The other factor that will restrict the performance of the USD will be the upcoming labour data which will guide general policy direction.

In the fixed income markets, Botswana entered the debt capital markets once again on Friday. Demand was strong for the 2027 issuance with the bid to cover ratio coming in at 5.9, with BWP 39m allotted at an average yield of 5.923%. The longer-dated 10yr experienced less demand with the bid to cover ratio recorded at 1.25. The government did however place more of this bond issuing BWP160m at an average yield of 10.91%. The market will welcome the greater issuance in the longer end of the curve as it does build out a more robust fixed income market with potential availability of stock in longer durations.