The regional data card in the Southern African complex is thin in the week ahead, with only a handful of South Africa and Zambia data releases. In South Africa, the PPI and budget balance stats are due on Thursday and Friday, respectively. For the former, expectations are that PPI will accelerate further in April. Supply-side constraints due to the adverse impact of the coronavirus pandemic and rising commodity prices are likely to be the key drivers. Base effects will also play a major role given how low PPI was through Q2 of 2020. However, high supply-side inflation may not filter through to the consumer side given SA’s current demand dynamics, suggesting it will place suppliers under even more financial pressure.

For the latter, the focus remains on the sustainability of tax intake as growth pressures remain unfavourable, with a host of weak corporate earnings reports highlighting a lack of profits in the economy. Revenue collection should return to more favourable levels following lockdowns, although the labour market remains weak by official measures. We generally expect government expenditure to remain buoyed in the absence of significant state reform, such as SOE privatisation and state job shedding. Therefore, a large deficit could well remain in place for the foreseeable future. This will undoubtedly raise the risks of further rating downgrades in the medium term.

Shifting to Zambia, investors will have to contend with the May CPI and April trade balance data. While inflation slowed in April, it is almost triple the top of the Bank of Zambia’s (BoZ) target range. Upside risks to the inflation outlook include the possible increase in energy prices (fuel pump prices and electricity tariffs) and any resurgence of coronavirus infections following the advent of the new variants. Although inflation is forecast to remain above the upper bound of the 6-8% range for at least the next eight quarters, the BoZ has indicated that price growth pressures are expected to ease faster than expected, mainly due to the improved supply of food, particularly corn and wheat. On balance, with risks to the inflation outlook tilted to the upside, the BoZ is likely to remain cautious in its approach to monetary policy for the foreseeable future. 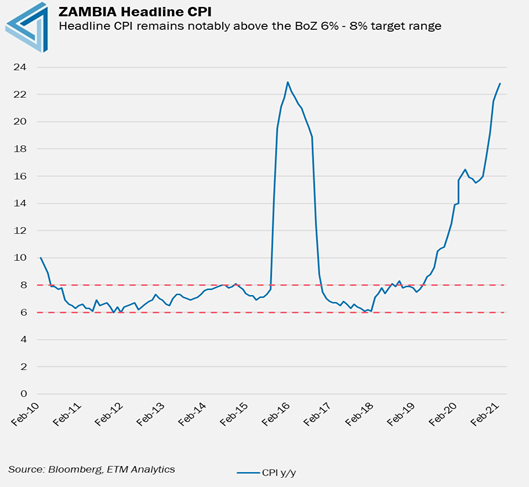 Meanwhile, a positive outlook for copper and rising prices amid increased demand due to the global recovery and the transition to green energy should provide support to Zambia’s trade balance.

The big news in the region was that both S&P and Fitch decided not to downgrade their sovereign credit ratings for SA deeper into junk status on Friday night. The two ratings agencies also opted to retain their respective stable and negative outlooks, citing short-term improvements in SA’s finances but continued risks to longer-term debt stabilisation prospects.

Zambia has reintroduced the coronavirus test on arrival and the mandatory 14-day quarantine for travellers from 15 countries as part of measures to combat the coronavirus pandemic. The affected countries are South Africa, Tanzania, Kenya, Ethiopia, Egypt, Tunisia, India, Iran, Turkey, France, Germany, Russia, Italy, Brazil, and Argentina. The list is expected to be reviewed and updated regularly.

Given the sensitivity of global markets to inflation dynamics at the moment, the US core PCE reading for April will attract plenty of market focus. This measure of price growth, which is also the Fed’s preferred gauge of inflationary pressure, recorded its biggest year-on-year increase since February 2020 in March. While inflation metrics are undoubtedly being impacted by base effects at present, it is worth keeping in mind that pressures are brewing after the extreme monetary and fiscal stimulus implemented last year. Additionally, elevated commodity prices and returning demand as economies reopen are also underpinning inflation expectations the world over. As such, risks in the US are tilted to the upside, although it remains to be seen to what degree the Fed will tolerate rising inflation under its new policy mandate.

The USD is on the defensive this morning as it struggles to make back any ground, especially with US Treasury yields still dipping and the authorities confirming that they are in no hurry to remove fiscal and monetary stimulus. Technically, the bias remains to the downside and with no significant data scheduled for release today, investors may well tread water for a little while longer as they search for a catalyst to the move. 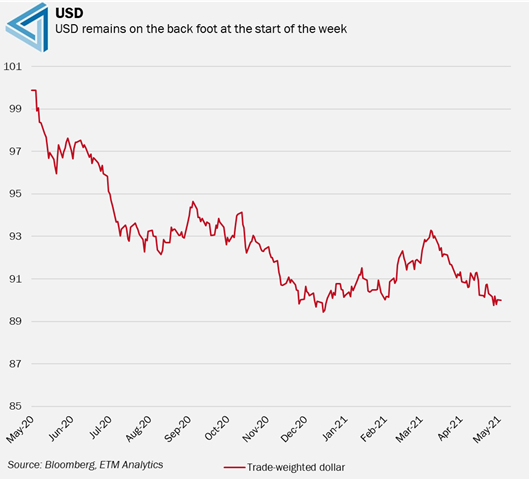 Despite a softer dollar, currencies in the South African FX complex have broadly traded on the back foot thus far. The ZAR has been the worst performer, down by -0.38% at the time of writing. Analysing the ZAR's performance through our in-house currency resilience framework, we see that South Africa scores last out of 22 countries for the fiscal prudence pillar. For the ZAR, this suggests a higher degree of vulnerability to external shocks or shifts in market sentiment over the medium-to-longer term. ETM maintains that the resilience shown by the ZAR through 2021 is primarily a function of supportive trade dynamics and ultra-accommodative monetary policy abroad. As such, the ZAR is at risk of a correction into the end of 2021 or beginning 2022 as recovering local demand may weigh on SA's trade surpluses of late, while the eventual tightening of financing conditions abroad will bring SA's fiscal risks to light and potentially trigger significant capital outflows.

While the ZAR, BWP, and MZN are on the defensive, the ZMW has bucked the trend and is little changed at the start of the week. Note that the Kwacha has traded at record lows and is likely to continue to do so in the near term. However, in the week ahead, the depreciation is expected to be at a slower pace.

While emerging market bonds have come under pressure this year amid the reflation trade, frontier market bonds have continued to strengthen as investor appetite for high-yielding assets in a world of record-low interest rates persists. Money managers across the board appear to be favouring sovereign bonds from Angola, Ghana and Nigeria, as these countries are expected to benefit the most from the marked recovery in international oil prices. Despite becoming the first African country to default on its debt amidst the COVID-19 pandemic, money managers haven't shied away from Zambian bonds, with investors hopeful that the significant rally in copper prices should bode well for Zambian bonds going forward. Adding to this has been the commitment from the likes of the International Monetary Fund to providing fiscal reprieve for the world's poorest countries which has helped alleviate some fiscal concern amongst investors.

In a world of low yields in the developed market space against the backdrop of soaring commodity prices, African bonds are expected to continue to be favoured by investors as they take advantage of the high yields on offer. Therefore, we could see African bonds continue to outperform their emerging market peers in the months ahead. Looking at JP Morgan bond indices, frontier market bonds have returned 2.6% since the start of the year, while emerging-market debt has lost around 2.0% over the same period.

While African bonds, for the most part, have strengthened this year, Mozambique’s 2031 Eurobond has sold off in 2021 as a combination of the massive 300bps rate hike at the start of the year, heightened fiscal concerns and lingering uncertainty pertaining to the country’s prospects of becoming a major player in the international LNG space due to the insurgency in Cabo Delgado weigh. For context, Mozambique’s 2031 Eurobond yield has risen by more than 175bps since the start of the year to sit at 10.61% at the time of writing.