Key in the week ahead will be central bank rate decisions out of South Africa, Mozambique, and Zambia. While inflation risks remain tilted to the upside, driven by soaring international commodity and food prices, the central banks of the countries mentioned above are likely to keep their respective benchmark interest rates unchanged. Policymakers are expected to overlook inflation concerns and instead continue to direct their efforts towards economic growth.

Slow progress on the vaccine front against the backdrop of fears pertaining to a new wave of the virus on the continent has dampened economic prospects. With growth at the forefront for many African countries, inflation concerns are expected to be placed on the back burner for now until signs of a sustained economic recovery in Africa are evident. Like the Federal Reserve, we expect that African central banks will be more accepting of quickening inflation, especially as many central banks see the latest episode of inflation as being transitory.

Although central banks will continue to monitor inflation closely to gauge whether the recent spike in inflation is likely to be sustained or whether it is transitory, we expect concerns about the fragility of economic recovery to outweigh inflation concerns. That said, once the third wave of the pandemic has passed and the vaccine rollout gains momentum, we expect policymakers in the region to normalize policy following the aggressive easing in 2020 in response to the COVID-19 pandemic.

However, it is worth pointing out that policymakers in Mozambique, Zambia and Zimbabwe were the first central banks globally to hike rates this year. The latter has warned that it “stands ready to adjust the policy rate upwards further should inflationary pressures persist.”. A marginal drop in inflation recently should, however, ease the pressure to tighten further.

Aside from the rate decision in South Africa, Wednesday will feature the release of the CPI and retail sales figures for March, while S&P will deliver its latest verdict on SA’s sovereign rating on Friday. Base effects are the major story with macroeconomic data, with the dip in prices around this time last year and subsequent recovery expected to buoy y/y readings for retail sales and headline inflation. Meanwhile, risks exist the S&P could decide to downgrade SA amid limited progress in state reform, such as SOE privatization and state job shedding.

On the news front, Zambia’s Finance Ministry on Friday said that it was working on a timeline for the reform agenda it has agreed with the International Monetary Fund. Note that the Washington-based lender said last week that it’s up to Zambia to implement agreed policies to pave the way for further talks. According to the ministry, “the government of Zambia is currently in the process of finalizing the time frame for implementation of the agreed reform agenda while ensuring that Zambia’s development objectives are met and social protection for the most vulnerable is secured.” With parliament and cabinet having dissolved on Friday ahead of the August general election, a resumption in talks with the IMF is likely to be difficult until after a new government has been formed. It is, therefore, likely that a deal will only happen after the polls.

Meanwhile, reports suggest that the third wave of COVID-19 has officially hit SA. The Free State, Gauteng, and the Eastern Cape have reportedly all shown concerningly high rates of infection, with the other provinces also reporting sustained increases over the last few weeks. This suggests that the return of COVID-19 restrictions looms large, which could slow SA’s economic recovery and further dent fiscal consolidation prospects. Some good news is that SA will launch the second phase of its vaccination programme today, with the aim being to inoculate five million citizens over the age of 60 by the end of June, provided the supply of vaccines comes as anticipated. Note that SA’s vaccination drive has been painstakingly slow, meaning more waves of COVID-19 may potentially hit the country in the months ahead before herd immunity is achieved.

The Fed FOMC meeting minutes on Wednesday and preliminary manufacturing PMI readings out of the US and Euro-area headline the international data card this week. While the April US CPI print sounded alarms about out-of-control inflation, the Federal Reserve continues to communicate that the recent episode of inflation is transitory. The FOMC meeting minutes are expected to underpin this notion. No material differences from the FOMC policy statement are expected. Although inflation is expected to rise to around 2.4% this year amid soaring commodity and food prices and as the economy reopens, the central bank expects inflation to return to its 2.0% goal next year.

Even though inflation risks are tilted to the upside, there is a strong case that can be made for a moderate inflation outlook. Inflation expectations over the medium to long term remain relatively anchored. Moreover, the level of slack in the labour market remains high, and commodity prices could ease as supply chain bottlenecks are resolved. On balance, while near-term inflation risks are elevated, we expect the Fed to stand by its looser for longer policy stance in the foreseeable future.

The PMI readings will be eyed for further insights into the growth dynamics of the US and EU economies.

Currencies in the Southern Africa FX complex have been a mixed bag on a month-to-date basis. While the ZAR and the BWP have recorded gains against the USD so far, the MZN and ZMW have been in the red. The ZAR has outperformed its regional peers amid a weaker dollar thus far and improving trade dynamics, driven by a rally in commodity prices. Although fiscal risks remain a hindrance to the ZAR, the combination of soaring commodity prices, which is bolstering hard currency flows into SA and persistent dollar weakness suggests that the near-term outlook for the ZAR remains bullish. 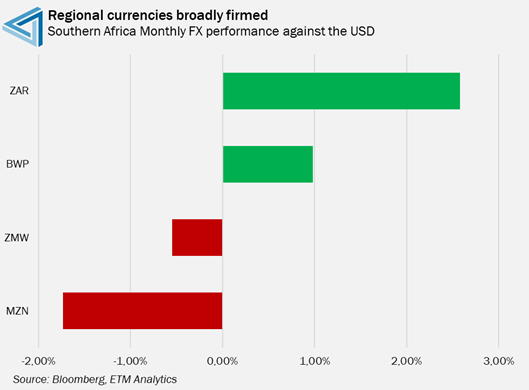 The MZN and ZMW, meanwhile, have struggled thus far. While the MZN is the laggard, having pared some of its recent gains, it is worth noting that it remains Africa’s best-performing currency against the USD on a YTD basis. Prudent monetary policy, which has translated into high real interest rates, has helped support the currency’s resilience. Meanwhile, immediate hard currency demand and pressure arising from debt servicing continue to weigh on the Kwacha, which is trading at record low levels.

At the start of the week, the USD has found a slightly firmer footing this morning as concerns over the virus in Asia raise overall levels of risk aversion. For now, though, any rebound in the USD will likely be tepid, with investors positioned for an ultra-accommodative Fed and a Biden administration that looks fully committed to pressing ahead with more fiscal stimulus, the anticipated recovery notwithstanding. Technically, the USD is still trading heavy and appears to be struggling to gain much traction in its recovery.

Shifting focus to the fixed income market, Zambian Eurobond yields continue to tick higher following comments from the International Monetary Fund (IMF) late last week. The IMF said that it wants Zambia to implement agreed policies before resuming talks on a much-needed economic program that has held up debt-restructuring talks with external creditors, dampening bondholders' hopes that a deal might be reached before the August general elections.

While the government has shown signs that it is looking to adopt a more prudent approach to managing its debt by approaching the IMF, Zambia's fiscal outlook remains worrisome. Therefore, we expect investors to continue demanding massive premiums for holding Zambia sovereign debt going forward unless significant progress is towards a deal with the IMF is made.