The global economy is making progress returning to its pre-pandemic growth trajectory, though supply challenges, Delta virus risks and quicker inflation continue to make for a choppy recovery, as well as cloud the outlook for central bank support. In Southern Africa this week, the macroeconomic calendar is quite dispersed, with key releases from three of the four countries. Specifically, investors will get an update on inflation in South Africa, followed up by Botswana’s central bank rate decision and a credit rating update for Zambia.

Data from South Africa on Wednesday may show consumer price growth slowing towards the midpoint of the South African Reserve Bank’s (SARB) target band of 4.5% in July, after snapping a three-month run of gains in June with a reading of 4.90%. Going forward, consumer price inflation is likely to moderate further due to the tighter restrictions imposed at the back end of June to curb the spread of the virus, exacerbating the usual factors such as weak economic growth, depressed domestic consumption, and a lack of meaningful credit growth. With headline inflation likely to remain contained in the months ahead, it will give policymakers the room to delay normalising the benchmark rate when they meet next month after the damage caused by July’s deadly riots, which saw policymakers adopt a less hawkish stance. 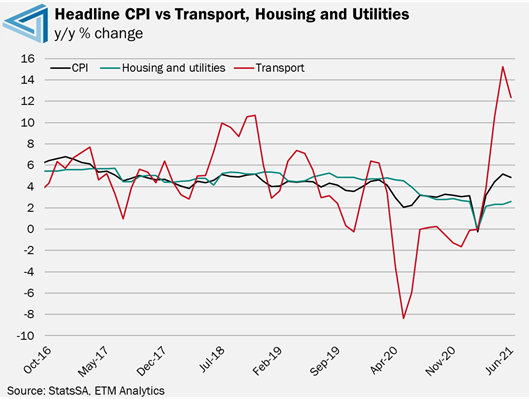 In Botswana, the central bank will meet on Thursday for a monetary policy review. The board will likely keep its benchmark interest rate on hold at a record low of 3.75% for the fifth straight meeting. Given that the nation is losing the battle against the pandemic, the central bank is focusing on supporting economic activity rather than combatting inflation, which accelerated to a near-decade high in July. Moreover, the central bank Governor Moses Pelaelo accredited the price pressure stemming from the second-round effects of the upward adjustments in administered prices. Pelaelo highlighted the factors driving inflation this year as mainly transitory, and thus, the central bank does not need to respond with tighter monetary policy settings.

Botswana’s President Mokgweetsi Masisi, whose country has one of the world's highest COVID-19 infection rates per capita, announced new COVID-19 restrictions on Friday, extending a night-time curfew and the postponement of the reopening of schools. The President blamed the slow delivery of vaccines for the frustrating pace of inoculation and reassured the population that the government is working tirelessly to ensure a speedy rollout of its vaccination program in the next three weeks.

Lastly, Zambia is scheduled for a revised credit rating by S&P. Recall that the rating agency cut the nation’s sovereign credit rating from “CCC-” to “SD” in October last year after the government missed a payment on its 2024 Eurobond. With the current rating suggesting the nation is in default with little prospects for recovery, there is still scope for S&P to revise the credit rating lower to default or “D”, primarily because the nation continues to grapple with liquidity pressure that the pandemic has compounded. There is a slim chance that S&P leaves the rating unchanged, giving the new Zambian President the benefit of the doubt in turning the government's large debt pile around.

On that note, Zambia's veteran opposition leader Hakainde Hichilema won the country's presidency, declared by President-elect by Esau Chulu, chairman of the Electoral Commission of Zambia, early Monday after results for 155 of the country's 156 constituencies were announced. President Edgar Lungu, conceded defeat and said he would work for a "peaceful transfer of power." Hichilema will become Zambia's seventh president since the reintroduction of multi-party democracy in 1991. Hichilema has his work cut out for him, as his supporters are looking to him to increase employment and cut out corruption. "We will fix this!" was one of his popular campaign slogans. With the election results now out that way, investors will watch closely to see if Hichilema can strike a much-needed deal with the International Monetary Fund (IMF).

In recent comments, Hichilema said that he plans to seal a bailout from the IMF as soon as possible and initiate debt-restructuring talks. Hichilema also noted in recent commentary that he could achieve an economic growth rate of more than 10% within five years. The newly elected President plans to revive Zambia’s economy by boosting growth in the mining, agriculture, construction and manufacturing sectors.

The most important risk event this week is likely to be the FOMC minutes, due on Wednesday. Markets cheered the outcome of July’s policy announcement as it seemed that tapering was not around the corner just yet. Since then, a solid non-farm payrolls report and Fed-speak about reducing quantitative easing seem to have been causing some repricing. Thus, the minutes will be closely analysed for hints as to when the Fed will be comfortable with the state of the jobs market and what it is willing to tolerate in terms of persistently high inflation. Should the minutes reinforcing the central bank’s broad confidence in the medium-term economic outlook, it will likely extend the bullish run in equities.

Across the Atlantic, investors will be eyeing the Eurozone’s final inflation reading for July. The reading is expected to confirm that price growth accelerated above the ECB's 2% target, owing to base effects from weaker prices seen around this time last year. Energy prices also remain elevated and will contribute to a higher headline reading, but when looking at core prices, we are likely to see that underlying inflation pressures remain fairly muted at present, keeping well below the ECB target rate. The reading, therefore, will unlikely move the needle for the ECB unless we some notable surprises to the core CPI figures.

Heading into the second half of August, risk assets are finding themselves trading on the back foot as Chinese data released earlier in the Asian session poured cold water over growth prospects and hurt the demand for riskier assets following last week’s rally. The USD has picked up some topside traction early on, while the US Treasury yields extended their gains as investors rotated toward safe havens. This week should see the USD stabilise ahead of the FOMC. Should the FOMC speak hawkishly about inflation and the taper, the USD will more than unwind the retreat seen on Friday last week. On balance, market risk appetite remains pegged to Fed policy expectations, with the potential announcement of Fed stimulus tapering at the September meeting growing.

In the Southern Africa FX basket, the Zambian Kwacha (ZMW) is a clear outperformer, even in the broader Africa complex, rallying off the back of the presidential election results, up less than 1%, the most since November 2015. The Botswana Pula (BWP) edged up 0.2%, while the South African Rand (ZAR) and the Mozambique Metical (MZN) tread water, down 0.04% and 0.21%, respectively and are likely to continue to trade at the whim of broader market sentiment in the near term. In the case of the ZAR, there is scope for bouts of strength as the market adjusts and refines its positioning on the timing of expected Fed tightening on the back of new data and information. At the same time, the USD-MZN continues to trade in a range-bound manner for well over a month now, with the 50DMA at 63.4382 preventing the pair from any moves to the downside. To the topside, the 64.000 level remains a key resistance level. A breakout in either direction is needed to determine the near-term outlook. Overall, Southern African currencies will be looking to make up for lost ground in the second half of the month, with impetus taken from offshore developments.

In the fixed income section, the shock landslide victory for opposition leader Hakainde Hichilema in the nation’s presidential election supported a rally in the nation’s Eurobonds. Specifically, Eurobonds yields due in 2024 and 2027 plunged 460bps and 227bps to 21.01% and 14.93%. Notably, the margin of victory provides Hichilema with a strong mandate to take on reforms needed to revive an economy wrecked by years of overspending that culminated in Africa’s first pandemic-era sovereign default in November. 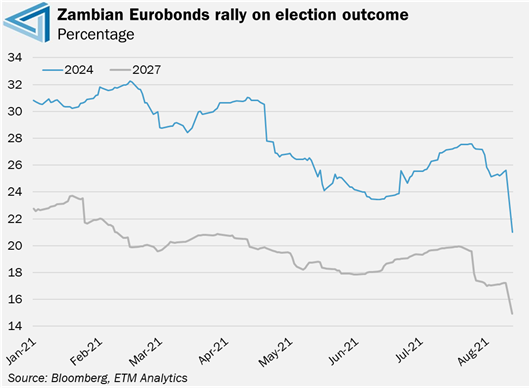 S&P’s rating, therefore, will be crucial for the local market and may reiterate that Zambia’s government may need to cut energy and farm subsidies that have depleted government accounts in recent years to avoid a further rating downgrade. Given that the new government seems open to it, investors will likely maintain a bullish stance for now whilst eyeing the restructuring of Zambia’s debt.