Speculation is building that the Fed will progress to a faster pace of tapering start in January. Such has been the strength in the recent data that investors believe the risk lies in the Fed speeding up, rather than slowing down, the pace of policy normalisation. Data just this week alluded to the buoyancy of inflation and the strength of the underlying economy. The USD is also trading as if investors are pricing in the risk of the Fed accelerating the pace of normalisation.

Focus now shifts to the Black Friday sales and early indications of how strong consumptive demand has been. All signs point to a strong end of the season, and a solid recovery in consumption as pent-up demand and excess savings are deployed. If anything, this will strengthen the USD bulls' resolve and heighten calls for the Fed to turn more conservative. It implies that the USD could end the year with a flurry as investors rotate away from the JPY, the EUR and the GBP, favouring a currency whose central bank can lift interest rates.

Angola: Data published by the Finance Ministry showed that Angola's October oil revenue jumped by 37% m/m to AOA 744.8bn. Angola exported 35.9mn in October at an average price of $68.46. Note in September, Angola shipped almost 33mn barrels for AOA 543bn at an average price of $69.06. Increasing oil export revenue has in part contributed to the Angola Kwanza strength this year. For context, the Kwanza is the third best performing African currency against USD, up by 10.17% according to Bloomberg's basket of 20 African currencies.

Ethiopia: Ethiopia's economy continued to expand despite the worsening conflict in the country. Specifically, Finance Minister Ahmed Shide yesterday reported that Ethiopia's economy expanded by 6.3% in FY 2020-21 compared with a forecast of 8.7% and a rate of 6.1% in 2019-2020. Shide also noted that tax collections in regions hit by conflict declined and that the government was boosting funding for repairs of damaged infrastructure and humanitarian assistance as well as rescheduling non-urgent projects.

South Africa: Producer price inflation for final manufactured goods surprised to the upside, coming in at 8.1% y/y in October compared with 7.8% y/y in September. The latest print highlights that supply-side inflation is not showing signs of abating anytime soon amid the lingering impact of the ongoing global supply chain distortions and elevated commodity and energy prices. With producers unable to fully pass the costs to consumers due to the depressed consumer demand and tighter household budgets, the continued increase in factory price will likely squeeze profit margins. Looking ahead, the lingering impact of the supply-side constraints alongside a weaker ZAR suggest that inflation pressures are likely to remain elevated, which justifies the SARB's move to hike interest rates at the previous meeting to help keep inflation expectations in check.

Zambia: Zambia's trade surplus widened to a 4-month high of ZMW 5.3bn in October from ZMW 4.8bn in the month prior. The surplus, however, narrowed in comparison to the comparable period a year earlier. A breakdown of the data from ZamStats shows that the widening of the surplus in October was a result of a more pronounced decline in inbound shipments than exports. Specifically, imports decreased by 6.9% to ZMW 10.6bn while exports fell by 1.6% to ZMW 16bn. With the broader fundamental outlook for copper positive, the trade account is likely to remain in surplus territory and continue to support the Zambia Kwacha, which is Africa's best-performing currency on a year-to-date basis.

Zimbabwe: Headline CPI in Zimbabwe rose to 58.40% y/y in November, from 54.49% y/y in the month prior. On a m/m basis, consumer prices rose 5.76%. A breakdown of the data shows that food, non-alcoholic beverage prices rose 6.51% in the month while non-food inflation climbed by 5.21% in November. Note headline inflation in Zimbabwe has risen for three straight months, mainly driven by a resurgence in the volatility of the parallel market exchange rate.

Forex: Zambia’s inflation falls to a one-year low on the lagged impact of a stronger Kwacha

Headline inflation in Zambia slowed further in November, coming in at a one-year low of 19.3% y/y from 21.1% y/y in the month prior. On a m/m basis, consumer prices climbed 0.6%. A breakdown of the data shows that food price inflation, a major contributor to the headline reading, slowed to 25.4% in November from 28.1% in the month prior. Meanwhile, non-food inflation decelerated to 12.2% from 13.2% in October.

Inflation in Zambia slowed for the fourth straight month in November, and this was mainly a result of the lagged impact of a stronger Zambian Kwacha (ZMW). Despite the recent weakness on the back of tight supply of hard currency amid high demand, the ZMW has been Africa’s best-performing currency this year among those tracked by Bloomberg, gaining around 19.21%. The stronger ZMW has helped drive down the costs of imports such as household appliances, vehicles, and certain food items like meat and fish.

Following the surprise 50bps rate hike by the Bank of Zambia, inflation may slow further in the coming months. Governor Denny Kalyalya said that the rate hike was aimed at steering inflation toward single digits by the end of next year and back within a 6%-8% target range by mid-2023. Inflation has been above the upper bound since May 2019 and is projected to average 22.6% this year. Upside risks to the inflation outlook include an increase in fuel pump and electricity prices to restore fiscal sustainability and a new wave of Covid-19 infections that could disrupt supply chains. However, policymakers expect a projected fall in corn prices after a bumper harvest, and good rainfall could lower inflation in the short-term. 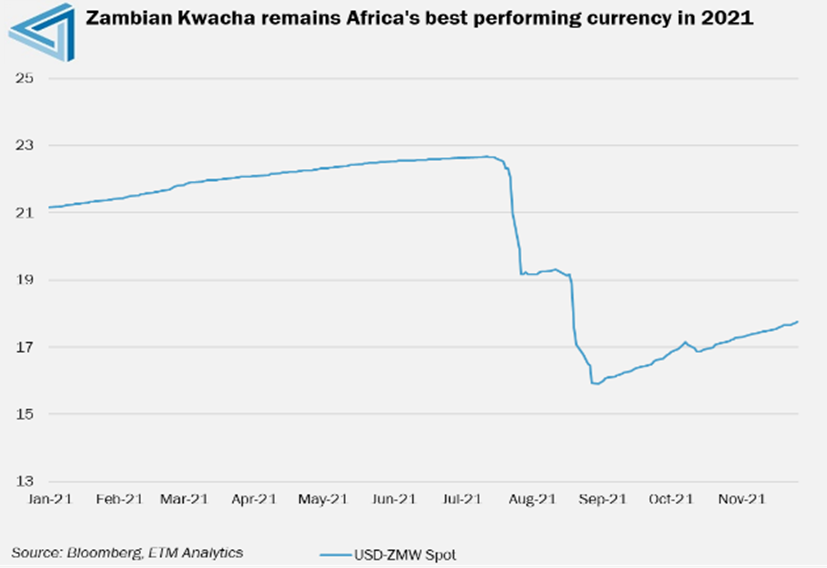 Looking at the day ahead, The Bank of Botswana will be placing BWP600m of 91-day and 182-day bills respectively at 12.00 today, while they also aim to place BWP100m 4.5% 2023 Bonds, BWP200m 5.5% 2027 bonds, BWP200m 7.75% 2031 Bonds and BWP100m 5.3% 2043 Bonds. The markets will be watching the issuance closely against the latest developments on the COVID-19 front. The anticipated fiscal pressures expected as a result of the latest developments may result in investors demanding a higher yield than government is prepared to pay.

Zambia will be issuing a deluge of paper today including 2023, 2024 2026, 2028, 2031 bonds. Coupons remain attractive, but risk off trading conditons due to the rise of COVID-19 infections may make the placement more of a challenge than it may have otherwise been

Further out, Kenya will be selling more T-bills on the 2nd of Dec to raise KES14bn, while Tanzania will look to do the same but on the 1st of Dec, in a bid to raise nearly TZS79bn. Zambia will join Kenya on the 2nd of Dec to raise ZMW1.4bn. As we head into the quieter trading period over December, many countries will seek to raise funding in the first two weeks of December. More issuance announcements can be expected in the next two weeks.

Heading into the week's final trading session, a different Covid-19 variant identified in Southern Africa is making waves. The U.K. has moved quickly to suspend flights to the U.K. from six Southern African countries namely South Africa, Namibia, Lesotho, Botswana, Eswatini and Zimbabwe. According to Sky News, flights will be suspended form 12.00pm today and from Sunday 04.00am new arrivals in the United Kingdom from the region will have to quarantine.

This is devastating for the tourism sector which was hoping for a bumper December as borders had opened up. We expect that a wave of cancellations from travellers from the UK will be received over the next day or two. The ZAR, the region’s proxy for sentiment has weakened sharply on the news overnight, and there are fears it could weaken further. Granted this is not just a local issue, emerging markets are selling off hard in the Asian session but the news does render the rand and by extension other regional FX pairs more vulnerable as a result. Terms of trade are certainly going to be less favourable as a result of lost tourism dollars.