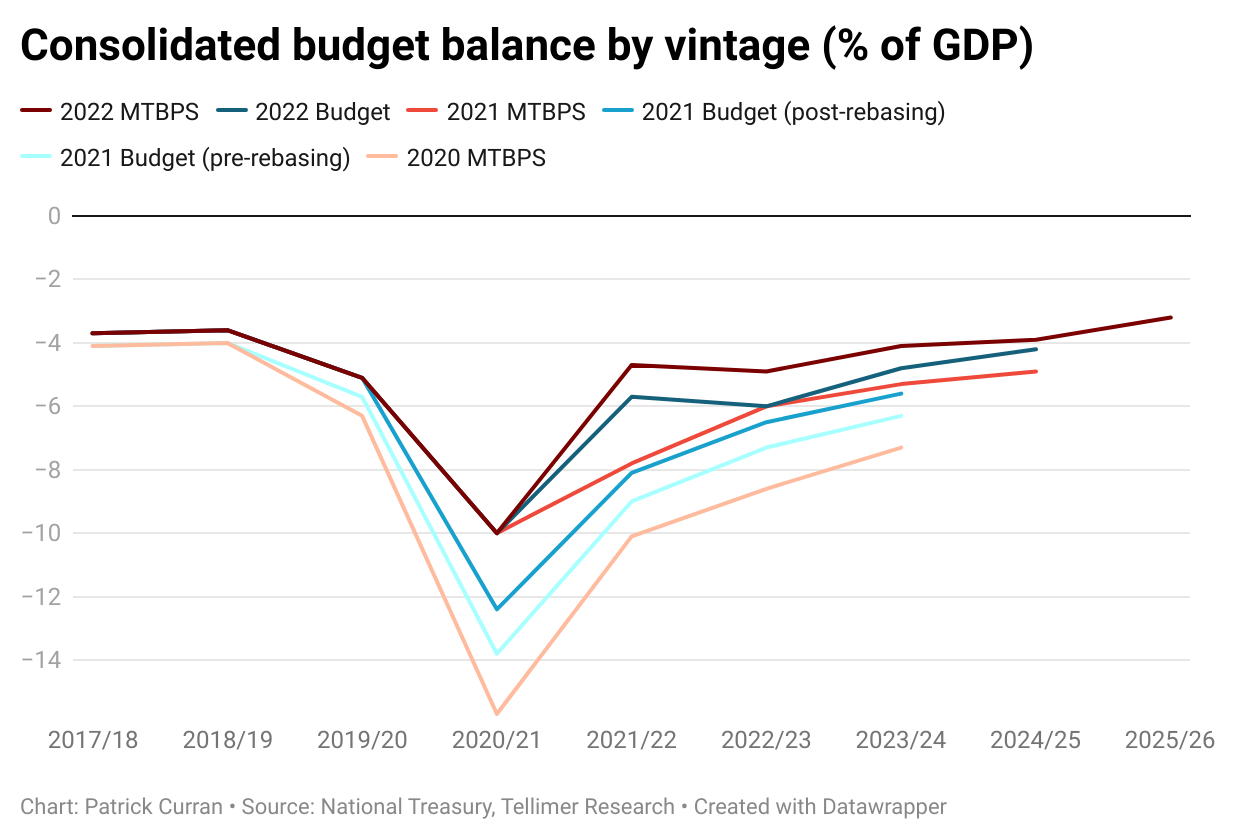 The latest improvement reflects higher nominal GDP (due to inflation) and the improved primary balance, which more than offset higher interest costs and the weaker exchange rate. 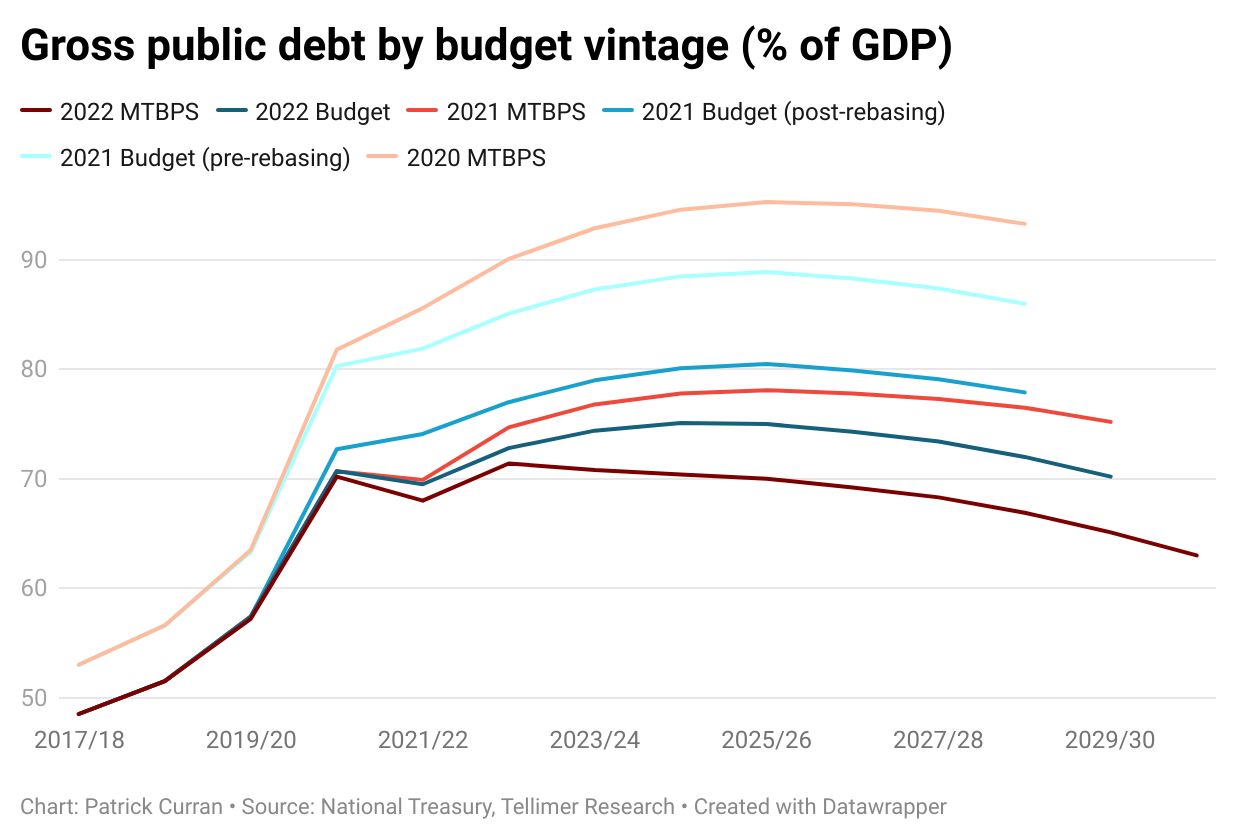 The improved primary balance is the result of higher revenue collection, with gross tax revenue revised up by ZAR84bn in the current fiscal year (after already having been revised up by R182bn between the budgets in 2022 and 2021) due to improved corporate income tax collection and by ZAR93bn on average over the medium-term expenditure framework (after being revised by ZAR143bn on average between the 2021 and 2022 budgets). 65% of the additional revenue will be used to improve the primary balance this year, followed by 45% in 2023/24 and 37% in 2024/25. 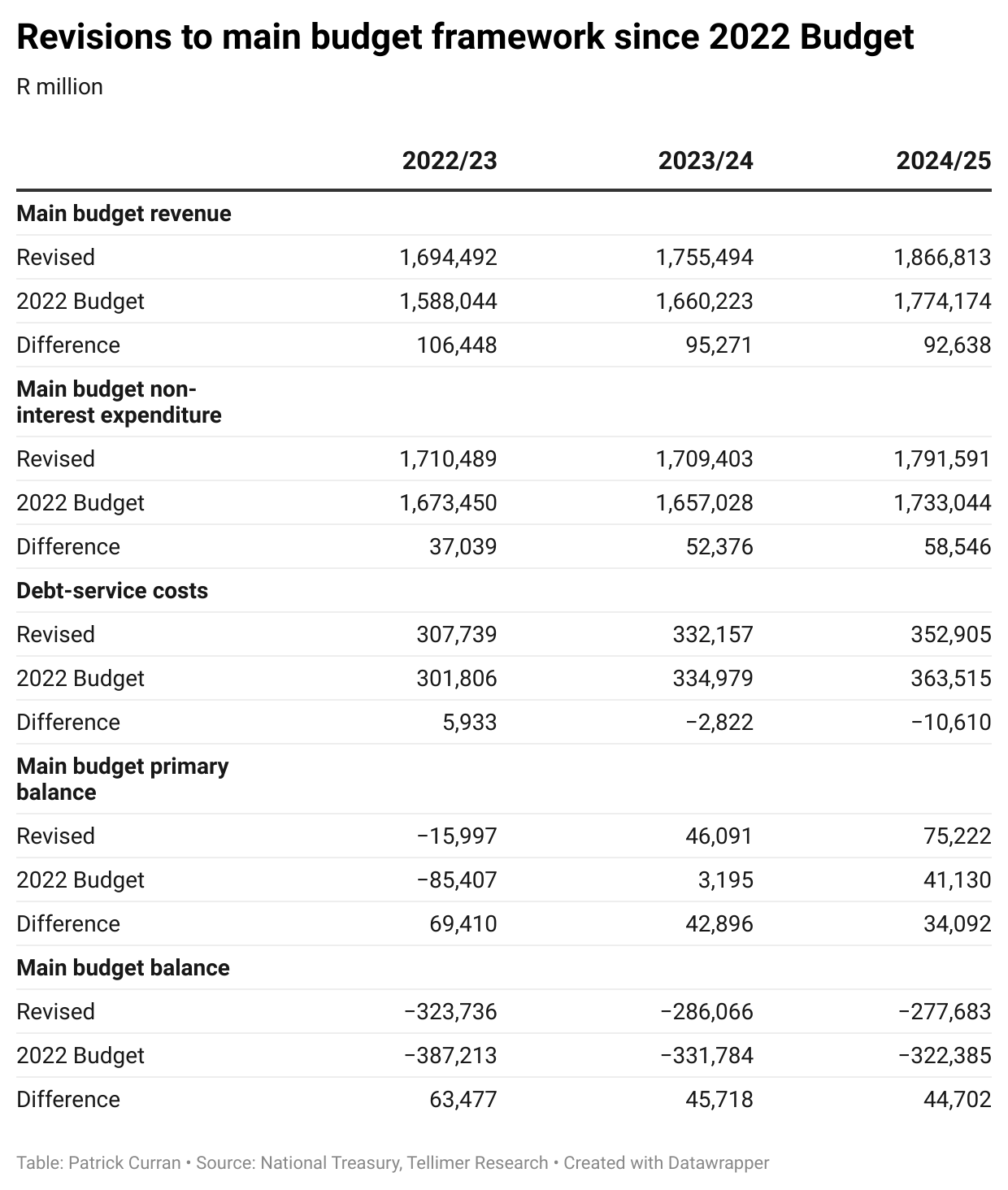 The rest will be used to fund additional spending on infrastructure and critical public services and to “address fiscal risks that were previously identified in February”, including higher-than-projected debt service costs, public wages and support to state-owned enterprises (SOEs). Overall, the NT has proposed an ZAR37bn net spending increase in 2022/23, consisting of ZAR54bn of new spending and ZAR17bn of offsetting spending reductions, and a net increase of ZAR55bn on average in 2023/24 and 2024/25.

The bulk of this year’s increase (ZAR30bn) comes from transfers to SOEs Denel, SANRAL and Transnet, which aims to restore financial viability in the long term to prevent future transfers. Another ZAR6bn, or half of the increase to general appropriations, is for disaster relief after the April floods in KZN. The NT emphasised that revenue increases can only be used to fund one-off items and not increases to baseline spending, and thus will not undermine the medium-term budget targets.

That said, risks are skewed firmly to the downside and future slippage is therefore likely. On the revenue front, weaker-than-anticipated growth or tax buoyancy could lead to downward revisions to the NT’s upwardly revised revenue projections. On the spending front, the risks are even more numerous, with the key onZAR1,000 monthly cash allowance. This has been included in the MTBPS and will be backdated to April 2022. However, negotiations are still underway and unions are unlikely to accept the offer, setting the government up for a continued standoff with the public sector unions.

Indeed, the economy-wide wage settlement rate in the first half of the year rose to 6.1%, despite a 30-fold increase in industrial action relative to the same period last year, well above the government’s proposed 3% increase. More recently, Transnet acceded to a 6% wage increase with one key union after a brief strike, but others are still holding out for increases of 10-12%. Despite the tough talk from Godongwana, it will be difficult to keep the wage bill within target with a restive labour movement.

For context, the cost of living adjustments for the public sector have exceeded inflation by 2% on average over the past decade, pushing South Africa’s public sector wage bill to 14.8% of GDP in 2021 versus an OECD average of 9.7% (exceeded only by Iceland and Denmark). With 2023/24 wage negotiations yet to begin, no provisions have been made for further wage increases to avoid pre-empting the process, meaning further slippage is likely next year, even if the NT can hold the line in 2022/23.

The NT has emphasised that above-budget wage increases will need to be funded by new revenue streams or spending reallocation within the existing envelope, and its commitment to holding the line in the face of intense pressure is commendable. That said, overshooting on the wage bill is likely to threaten the NT’s consolidation plans over the medium term, and, even if it is fully offset by new revenue and spending measures, it will hamper the government’s ability to deliver on its developmental goals.

On the social front, the Covid-19 social relief grant has been extended yet again from March 2023 to March 2024. The grant was introduced in May 2020 and was meant to be temporary, but its repeated extension shows just how hard it has proven to remove. The NT estimates that, if the grant was extended indefinitely, its cost would grow by 8.8% per year to reach ZAR65bn by 2030/31, thus threatening the sustainability of public financing without a permanent source of funding.

The NT says that discussion on the future of the grant is ongoing, and, like the wage bill, emphasised that a permanent extension of the social relief of distress grant, or a similar new grant, must be matched by an offsetting permanent increase in revenue or decrease in spending. We think the social relief grant will likely be permanently extended in one form or another. Even if its extension is only partial, this will further decrease fiscal space for the NT and make it more difficult to deliver on its budgetary goals.

Against the backdrop of tightening financial conditions globally and tighter monetary policy at home, these assumptions could prove overly optimistic. Indeed, South Africa’s 10-year ZAR-denominated government bond yield has risen from <10% at the beginning of the year to c11.25-11.5% this week. If the NT’s interest rate projections once again prove optimistic, this could lead to an even greater debt service burden, a risk that will be magnified if slippage elsewhere in the budget raises the risk premium.

Lastly, South Africa’s struggling SOEs constitute a major risk. The NT has allocated ZAR30bn of funding this year to support Transnet (ZAR3bn), SANRAL (ZAR24bn) and Denel (ZAR3bn), but encouragingly has emphasised that all current and future SOE funding will come with strict pre- and post-conditions. Indeed, the Land Bank’s request for ZAR5bn of new support in 2022/23 has so far been rejected, as conditions for the release have not been met, underlining the government’s commitment to the principle of conditionality. That said, if restructuring plans are not successful, then more transfers could be required in the future.

Most significantly, the NT has laid out plans to take over between one-third and two-thirds of Eskom’s ZAR400bn debt load. The exact modalities of the transfer are yet to be determined, but it will include strict conditions and be part of a broader restructuring programme that allows Eskom to focus on plant performance and capital investment and ensure that the company becomes financially stable over the longer term. The full plan will be announced during the 2023 Budget and, alongside the debt transfer, could represent a major step in solving the power crisis if executed properly.

After years of kicking the can down the road, this is the first sign that the government is willing to tackle the issue head-on. While long overdue, the renewed urgency is welcome, with load-shedding already surpassing the record 2021 annual outturn by 2.4x over the first three quarters of the year and hitting 50% above the 2021 total in Q3 alone. Today’s announcement prompted the spread between the guaranteed and non-guaranteed Eskom bonds and government debt of a comparable maturity to contract by c20bps and c60bps, respectively, and will likely reduce the cost of future debt service. 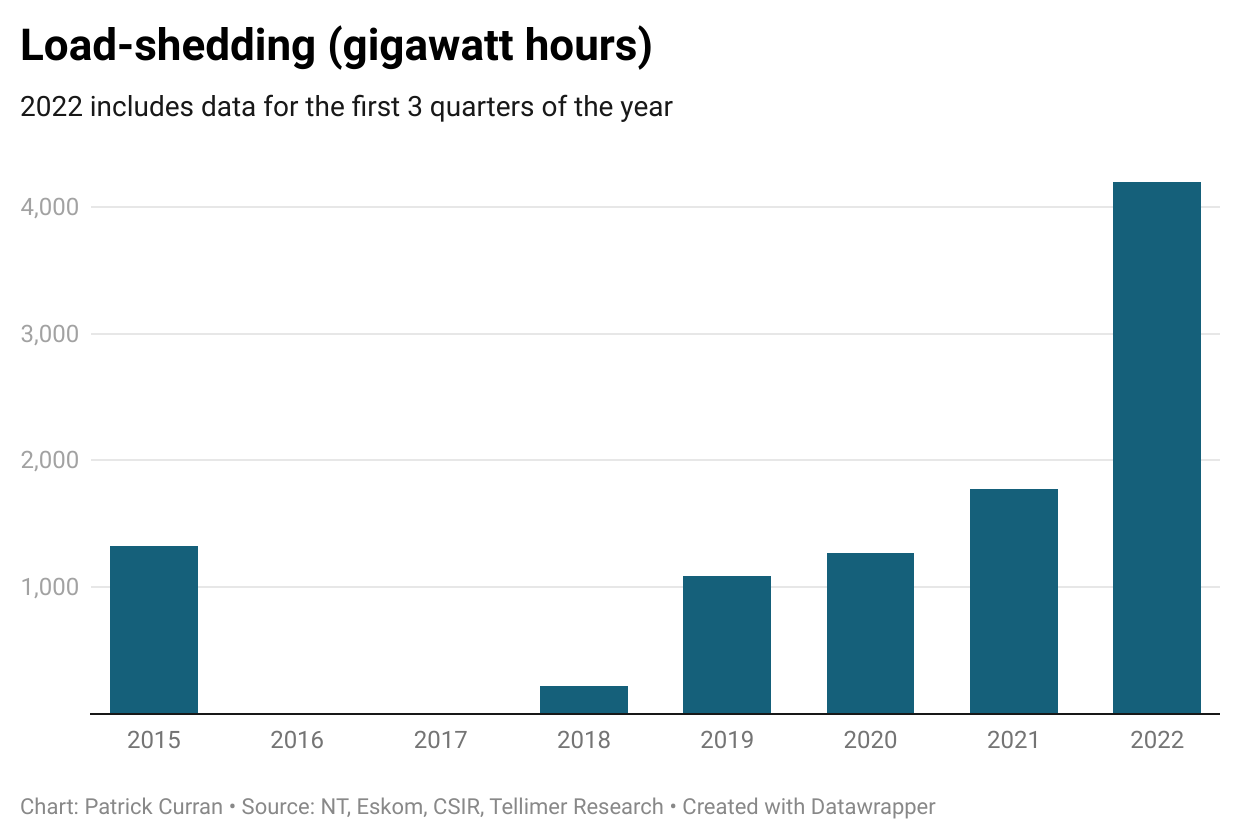 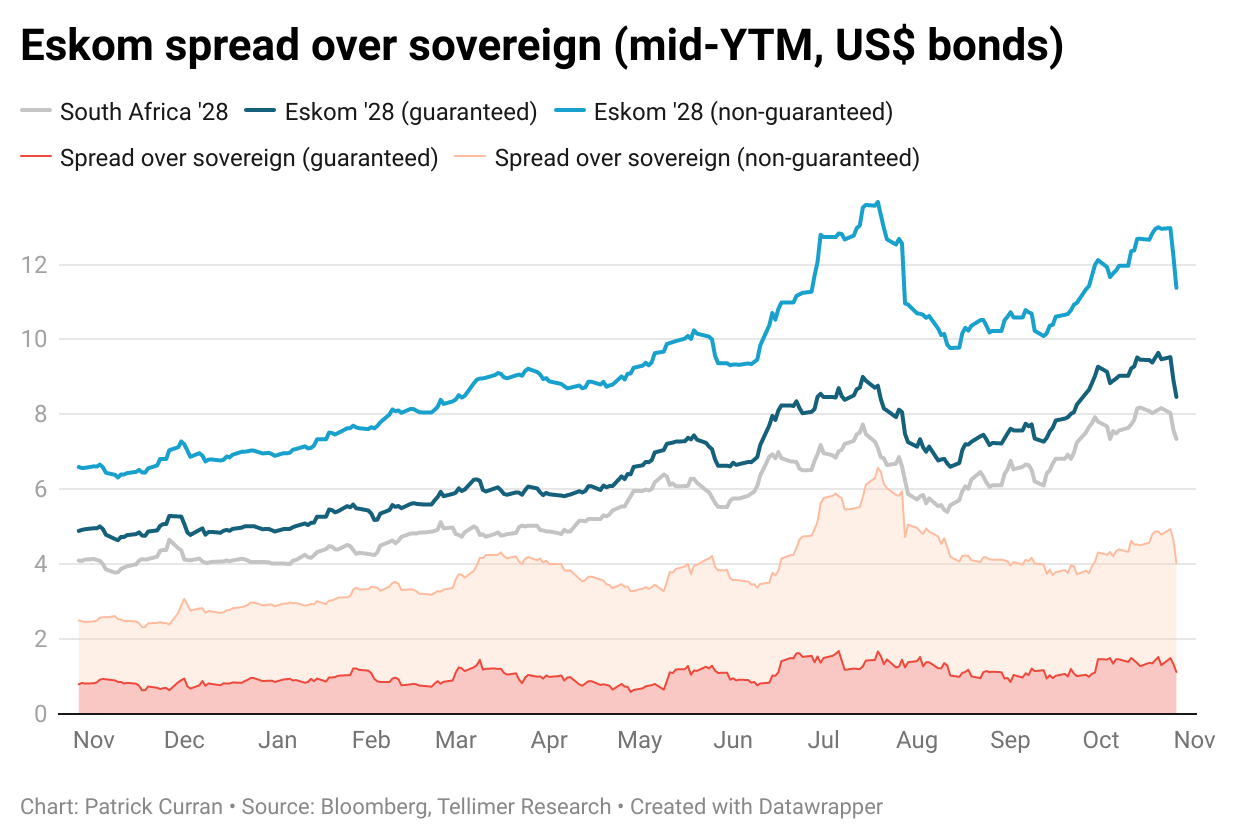 At the same time, it is likely to have a limited impact on government finances. While the government debt stock will rise by 2-4% of GDP, depending on the amount of debt it takes on, most people already factored South Africa’s guaranteed debt into its debt stock (with the approved guarantees reaching 12% of GDP in May 2022 and actual guarantee exposure reaching 9% of GDP). Further, the government was already incurring a large recurring cost of 1% of GDP on average in the previous two fiscal years to keep Eskom running.

As such, putting Eskom’s debt on the government balance sheet will reduce the cost of future debt service without having a material impact on South Africa’s creditworthiness. However, the successful completion of Eskom’s restructuring programme is essential to reduce the growth overhang from rampant power cuts and reduce the need for more government support in the future, and it is still too early in the planning process to gauge how likely the plan is to succeed. Further, the NT projects contingent liabilities will continue rising to over ZAR1bn (13.3% of GDP) by 2024/25, which will present a major risk to the fiscal situation if the government cannot deliver on its SOE reform plans.

Markets responded positively to the MTBPS, with ZAR rallying by 1.5% (versus a 0.3% rise in the JP Morgan EM Currency Index), the 2032 eurobond spread contracting by 19bps and the 2032 domestic debt yield falling by 25.5bps to 11.275%. We think the reaction is warranted given the improved fiscal consolidation path and associated debt trajectory, as well as the increased emphasis on SOE reform and continued focus on defending the spending targets and offsetting any future slippages within the existing budgetary framework via offsetting revenue hikes and spending cuts.

The yield contraction stems in part from the revised borrowing requirement, which was revised down to ZAR411bn in 2022/23 versus ZAR485bn in the 2022 Budget. With South Africa’s external borrowing needs already met in the current fiscal year via a US$3bn eurobond issuance and US$1.7bn of concessional funding from IFIs, this means that domestic borrowing will be revised down. However, borrowing requirements will average ZAR446bn over the medium term due to rising redemptions (higher than the pre-Covid outturn of ZAR416bn in 2019/20), increasing sensitivity to rising rates.

Overall, we think Godongwana’s latest MTBPS is about as good as could be expected. Positive revenue revisions were once again used in part to lower the deficit and in part to fund one-off spending items, while the government’s rhetorical commitment to resisting permanent spending increases and improving the composition of spending to offset the multi-year decline in investment is commendable. That said, the risks are skewed firmly to the upside, with the latest IMF WEO estimates diverging firmly from the government’s forecasts in an implicit signal of the low credibility of South Africa’s fiscal targets.

As usual, the heavy lifting will be left for the 2023 budget in February, which, not least, will face the herculean task of presenting a credible restructuring programme for Eskom and, more likely than not, offsetting an overshoot on the public wage agreement and hashing out a pared-back but permanent social grant increase that does not destabilise the government’s consolidation plans. If global financial conditions continue to tighten and/or the SARB needs to react more aggressively than currently anticipated to rein in inflation, then a rising interest burden will make the NT’s task even harder.

We are encouraged by yesterday’s MTBPS, and believe credit is due to Godongwana and the team for staying the course on consolidation. However, the margin for error is thin, and South Africa cannot continue to rely on revenue windfalls to fund 'one-off' spending items that, realistically, should be seen as being more permanent in nature. The government is likely to face difficult trade-offs to deliver on its consolidation plans, and it remains to be seen if it can hold the line when faced with a negative shock to the budget rather than the positive surprises we have seen over the past two years. 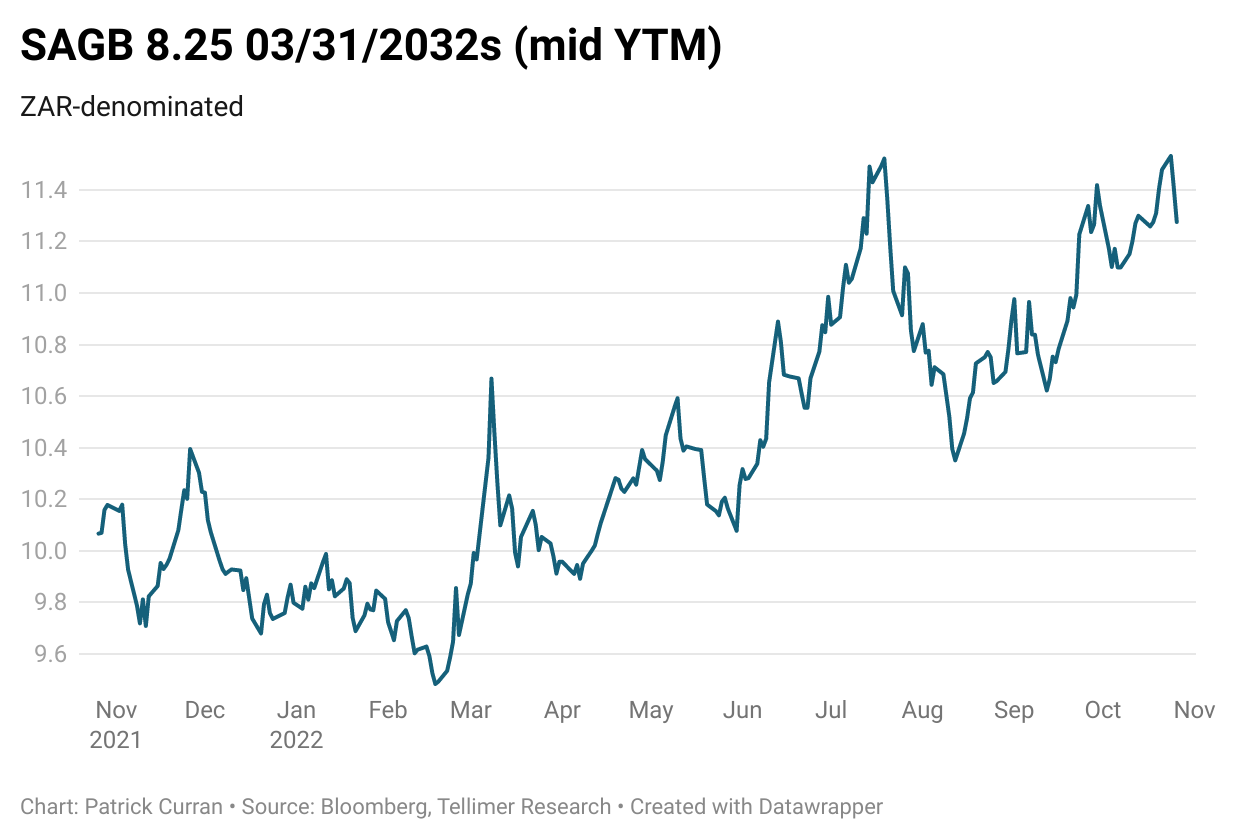 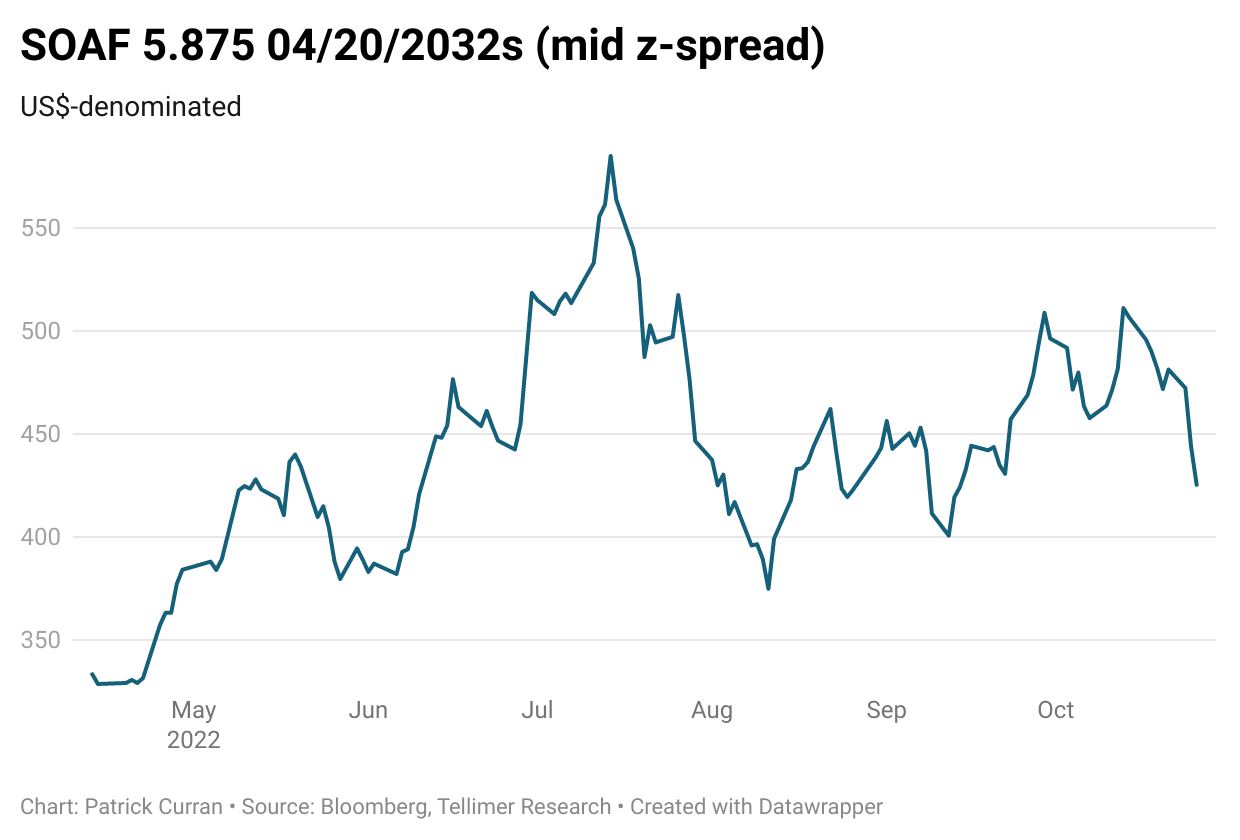