After the special adjustments budget (SAB) in June, we highlighted our disappointment over the lack of ambition on fiscal and structural reforms, arguing that the current crisis has presented an opportunity to implement tough reforms that were previously off the table (see here). However, we also acknowledged that the MTBPS was a more appropriate avenue for reforms than an emergency budget, and argued that today’s announcement would be a watershed moment.

Ultimately, the Treasury has again failed to take the reins as today’s MTBPS is light on reforms (aside from public sector wage reductions, which is encouraging but potentially unrealistic) and chooses a middle path on consolidation that is better than the "passive" scenario presented in June, but notably worse than the "active" scenario that would have seen a lower and earlier stabilisation of debt. 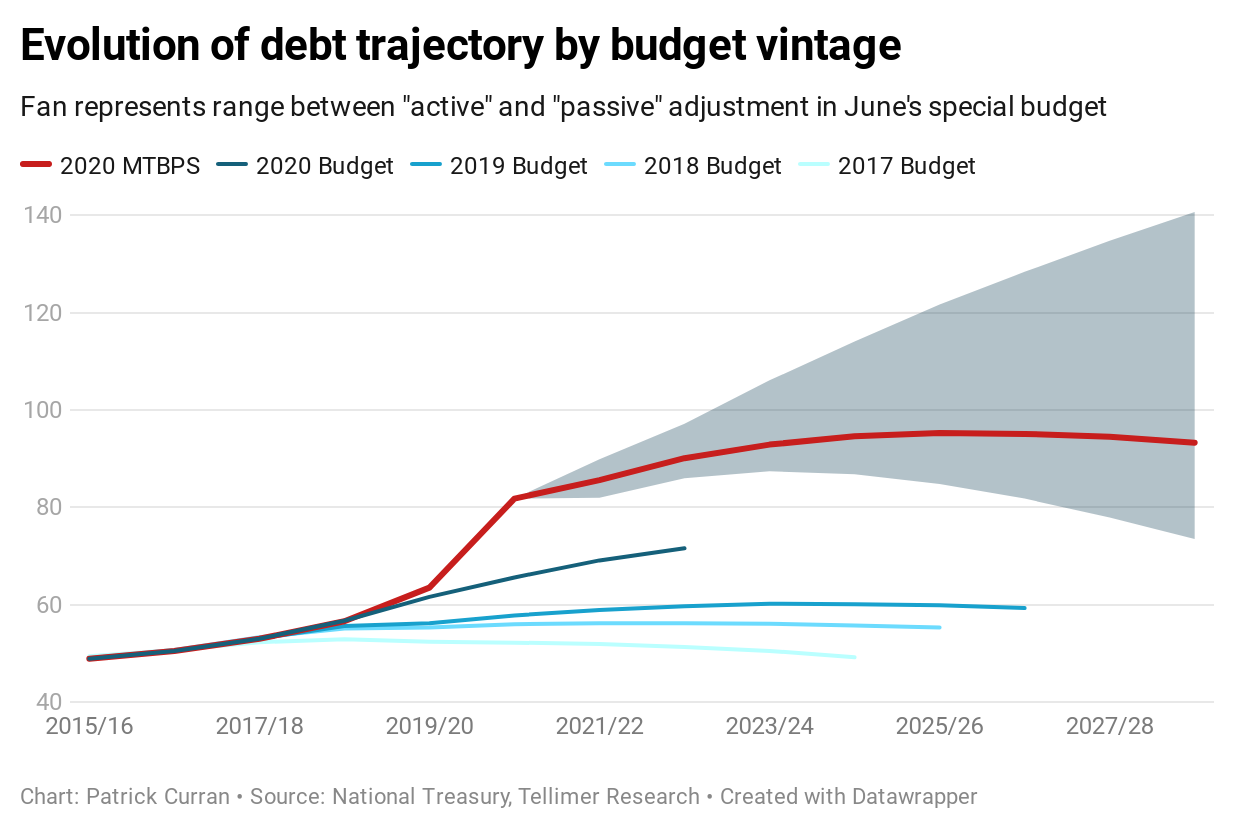 The expenditure-driven consolidation delivered by the Treasury, focused on wage reductions and a reallocation away from current spending towards much-needed capex, is probably the best that they could deliver in the current backdrop and should be applauded. But we had hoped that the MTBPS would be used as a platform to announce ambitious structural reforms and shift the narrative on state-owned enterprises (SOEs) to lay the ground for aggressive headcount cuts and privatisation.

Instead, the MTBPS leaned on the usual boilerplate promises on structural reforms and investment. While we acknowledge that this is the failure of government more so than the Treasury itself, which was dealt a nearly impossible hand, we think the lack of concrete measures in the MTBPS represents a failure to seize upon the current crisis to set South Africa’s economy on a sustainable trajectory.

With risks to growth and fiscal targets firmly on the downside, we think pressure on the ZAR and government finances will continue over the medium-term and that South Africa’s local yield curve will continue to steepen.

Debt stabilises later and higher due to fiscal slippage 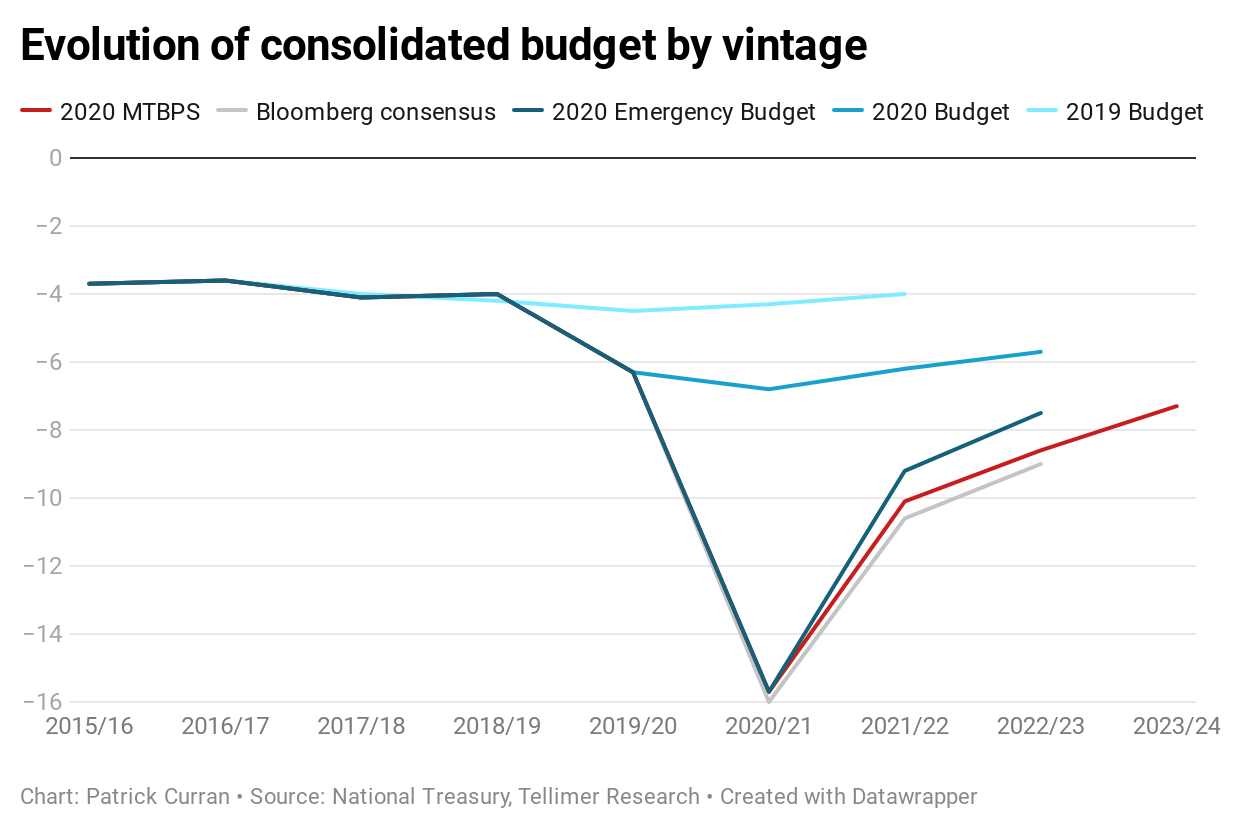 The changes were driven by the downward revision to growth, which is now projected to contract 7.8% this year from 7.2% in June, with 2.2 million South Africans losing their jobs by June and another 5 million to leave the labour market. Based on current projections, the economy will only recover to 2019 GDP levels in 2024. 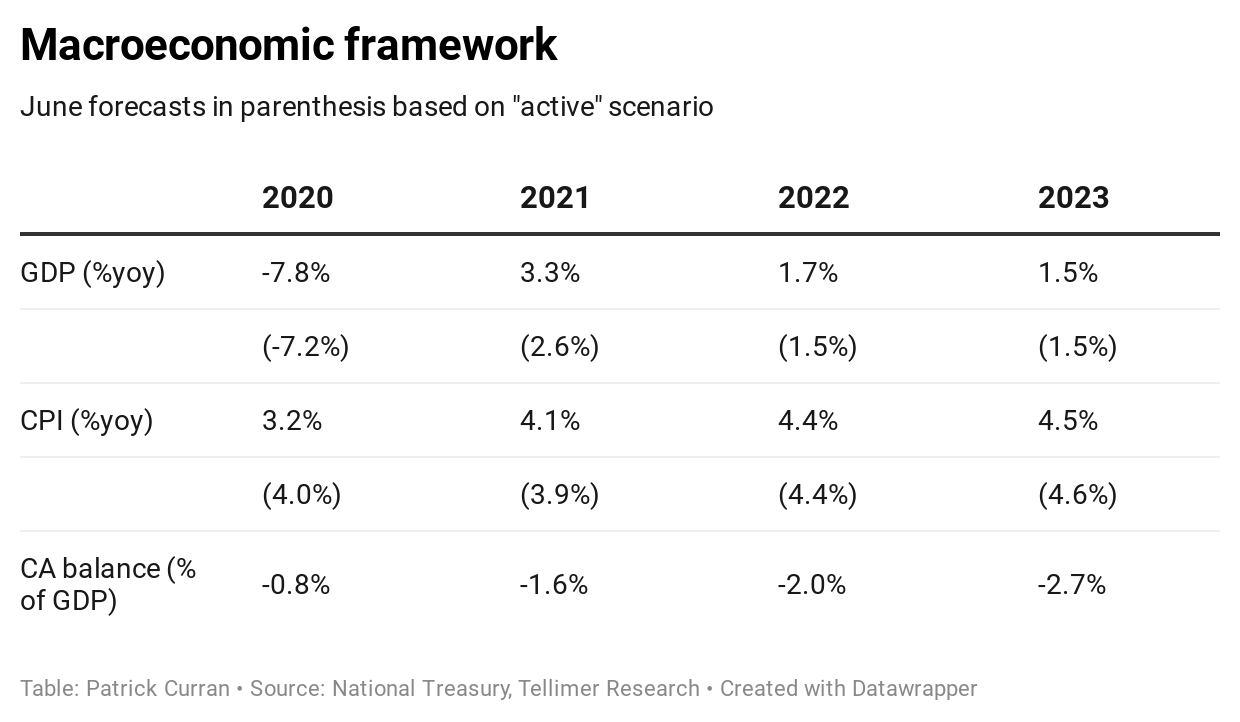 The MTBPS highlights three key fiscal trends since 2016/17, including: 1) a rise in debt servicing costs from 3.3% to 4.8% in of GDP (or 21% of revenue) this year; 2) a drop in public infrastructure spending from 5.7% to 4% of GDP; and 3) deteriorating SOE balance sheets. These trends have crowded out private sector investment, which has been declining for four consecutive years and has fallen from 23% of GDP in 2008 to 17% so far this year. 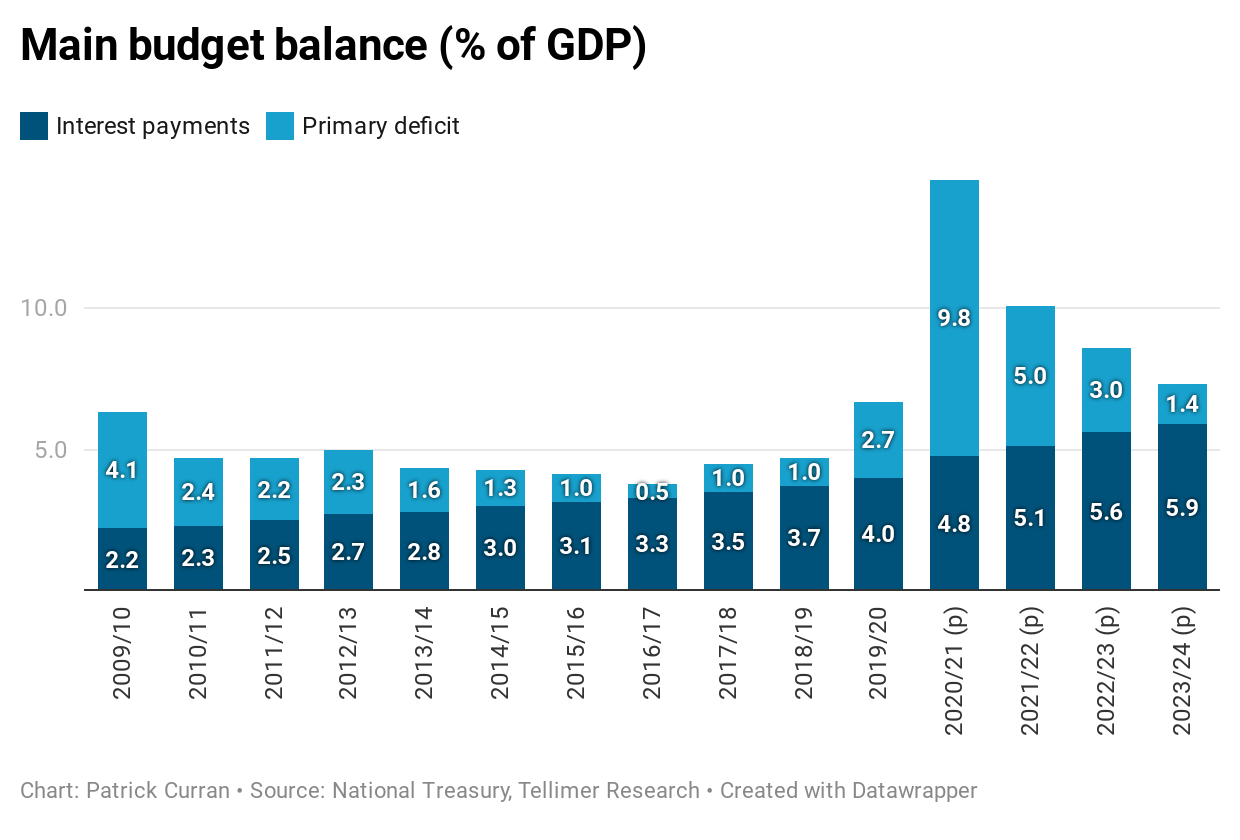 It is positive that the Treasury is pursuing an expenditure-based consolidation, as South Africa is probably past the peak of the Laffer curve (ie tax hikes might actually reduce growth) and fiscal multipliers are estimated to have fallen below 1, and by some estimates below 0 (ie further spending will have a negligible, or even negative, impact on growth). Meanwhile, a reprioritisation of spending from wages towards capex ensures that the adjustment will be as growth positive as possible.

However, it will be exceedingly difficult to keep a lid on the wage bill in the face of political pressure from South Africa’s strong public sector unions. Spending targets hinge on the assumption that the government will be able to stick to its decision to refrain from implementing this year’s agreed salary increase (which is currently before the Labour Court and would cost the government ZAR37.8bn, or c0.8% of GDP, if reversed) and freeze wages for the next three years. If unions succeed in extracting wage increases in the upcoming round of negotiations, fiscal consolidation plans could be blown off course. 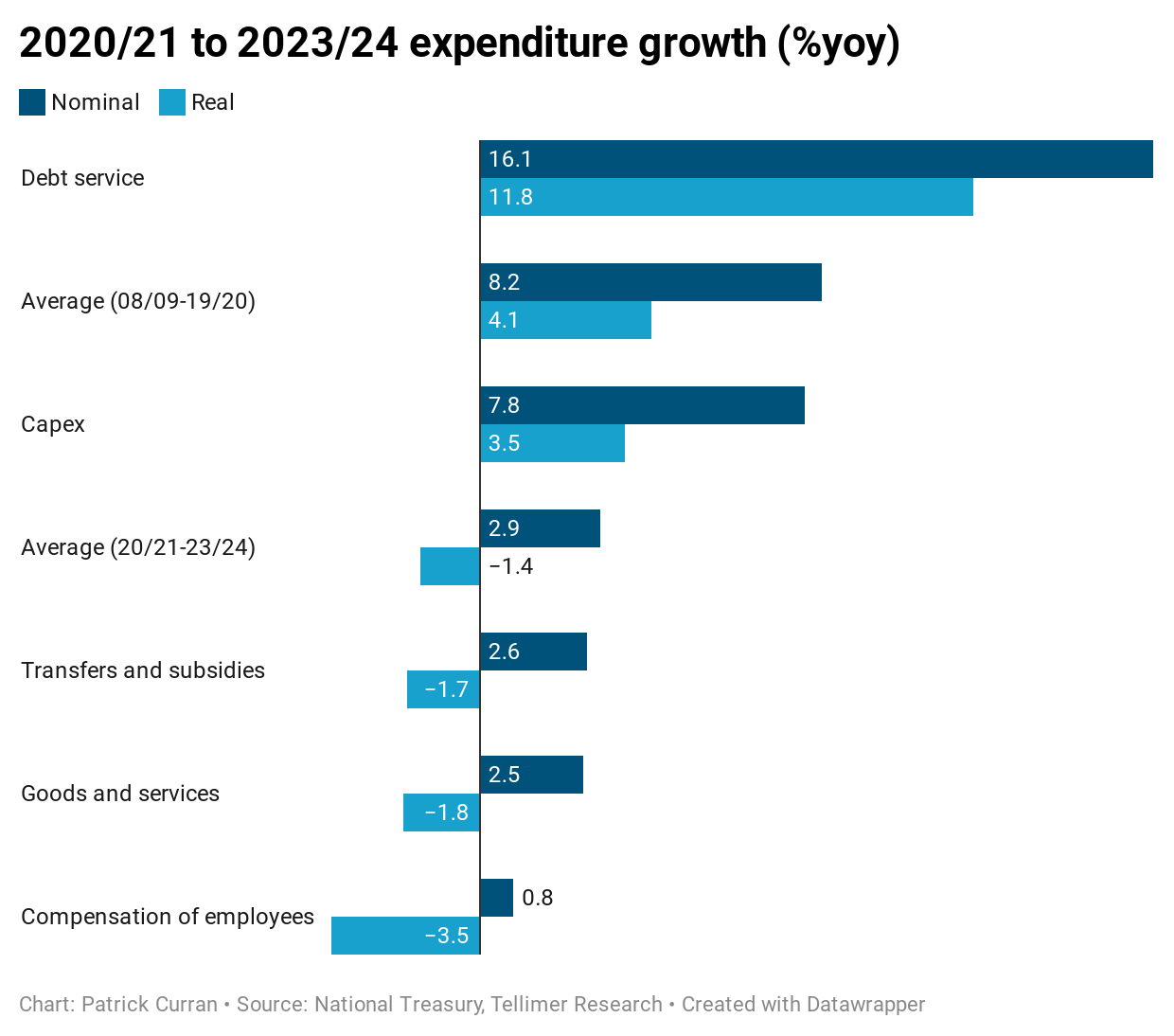 Consolidation of the wage bill, if successful, would represent a major fiscal accomplishment over the medium-term. However, in our previous work, we have also highlighted the importance of ambitious structural reforms and restructuring of SOEs.

In this regard, the budget was again largely silent. In the short term, reforms will focus on "building infrastructure, expanding electricity generation, allocating digital spectrum, and supporting rapid industrialisation and employment" as well as "modernising network industries, reducing barriers to entry, and increasing regional integration and trade."

The Treasury estimates that these reforms could raise growth to over 3% over the next decade and create more than 1 million jobs, and the Presidency and Treasury have jointly established Operation Vulindlela (open the way) to speed the implementation of priority reforms. The government has also established a ZAR100bn Infrastructure Fund to "crowd in private sector finance and expertise to support infrastructure delivery," and plans to make it easier for pension funds to infrastructure (stopping short of prescribed asset purchases, as some had feared).

However, the reform agenda appears to still very much be in the aspirational phase, with no new concrete measures announced in the MTBPS. While the Treasury cannot be expected to do all the heavy lifting, today’s budget stops well short of the ambitious reforms that are required to drag South Africa out of its low-growth rut and signals a broader lack of reform momentum within the government itself.

On SOEs, too, no new measures were announced. While Eskom’s unbundling is underway and divisional heads have been appointed, there was no sign that more ambitious and urgently needed reforms like staff cuts, tariff hikes or partial privatisation are on the table (see here for our recent overview of the state of SOEs in South Africa).

We were hopeful that the Treasury would at least take a hard line on extending further funding for South Africa Airways (SAA), which has been seeking ZAR10.5bn to fund its rescue plan. However, the Treasury decided to directly fund the restructuring, and was apparently unable to attract private funding from interested parties like Ethiopia Airlines that wanted the government to first deal with legacy issues like labour relations and the debt overhang.

Again, while we appreciate that the government should really be leading the way on structural reforms, we think the MTBPS was another missed opportunity to make difficult decisions on key matters like SOE headcount or privatisation, among others.

Like us, markets seem slightly disappointed too. The ZAR was down by c1% vs the US$ as of 3:30pm EST, after initially selling off by c1.8% immediately following the announcement. Meanwhile, the 10-year local government debt was off by c7bps, after an initial sell-off of c15bps. However, with the JP Morgan EM Currency Index down by c80bps on the day, the overall impact has been quite muted.

The financing mix will remain broadly unchanged over the medium-term, focusing on long-term domestic financing. External funding this year will come mostly from IFIs, including US$1bn from New Development Bank, US$4.3bn from the IMF and ZAR5bn (cUS$300mn) from the AfDB at concessional rates. 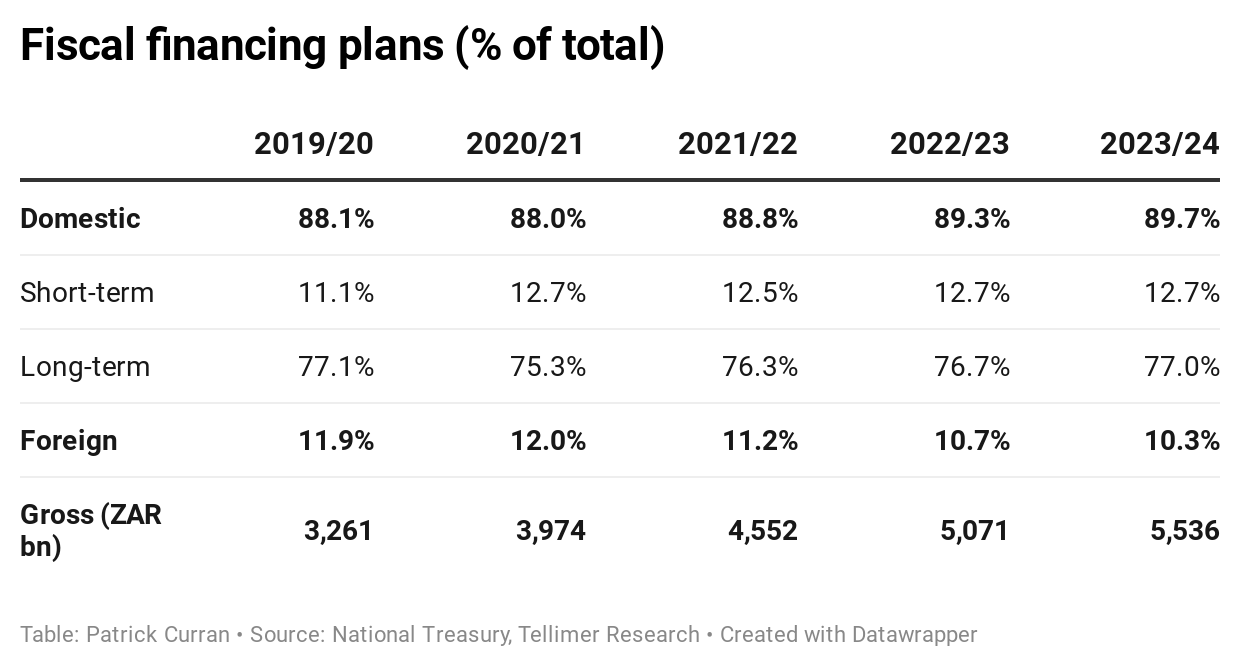 With fiscal risks remaining elevated amid rising debt and monetary policy remaining accommodative amid low inflation, we are likely to see continued pressure on the long-end of the yield curve. While the 10y/2y spread has risen from 125bps to 500bps over the past three years, further steepening cannot be ruled out. 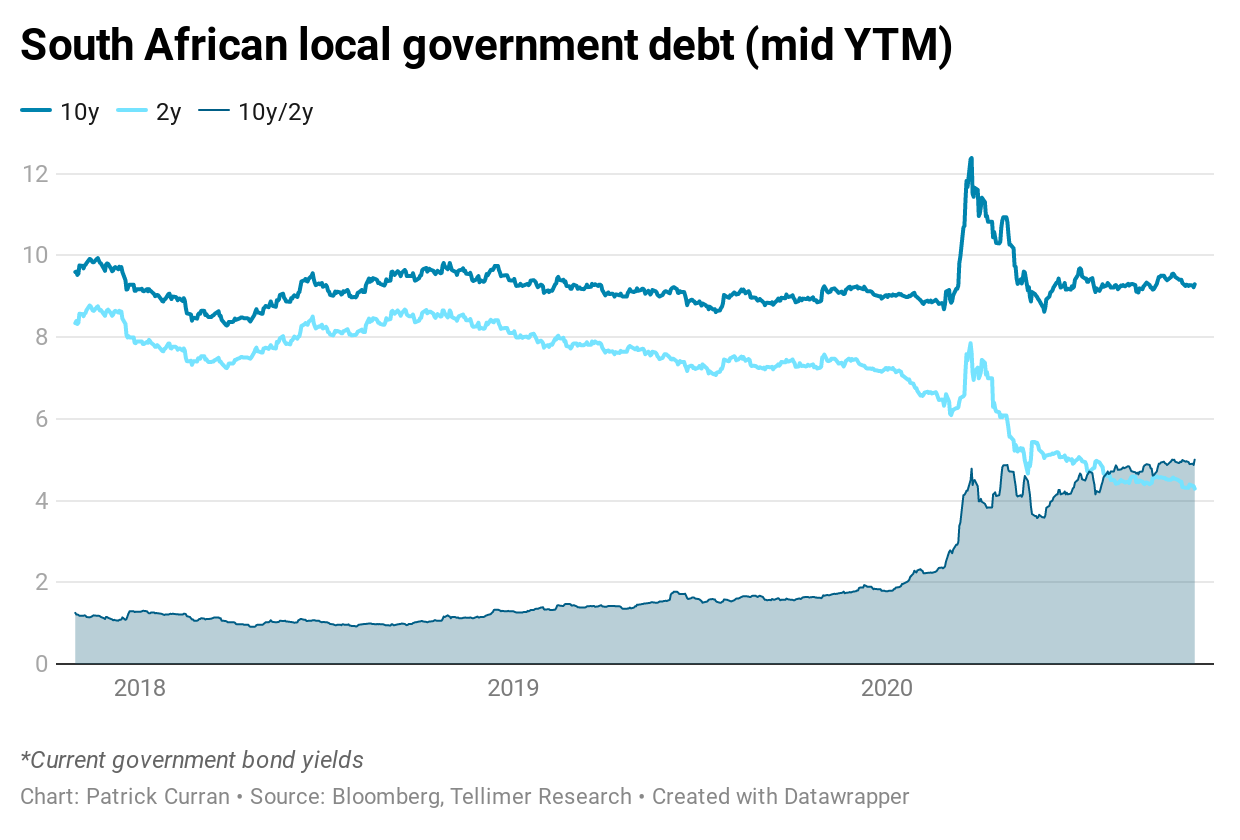 South Africa has to solve the Eskom problem, 9 October