In South Africa, riots, looting, the deployment of the army, deaths and arrests have followed the prison sentence handed down to former President Zuma for failing to attend hearings to address corruption charges. The most important factors behind the unrest are the country's stark inequality, economic hardship, divisions within the ruling ANC party, and paralysis in structural reform more than the ethnic splits mentioned by incumbent President Ramaphosa or, even, the corruption allegations surrounding his predecessor.

None of these negative risk factors are new, eg measures of inequality were just as unfavourable 15 years ago, and South Africa equities remain cheaply valued relative to history. The commodity price rally and hopes for a pick-up in structural reform momentum have driven South Africa equities (JSE All Share) up 17% ytd, compared to MSCI EM up 5%. But, despite this recent outperformance and the violence seen in recent days, they remain attractively valued, with forward PE of 10.1x close to a 30% discount to the 5-year median and with the real effective exchange rate is on par with the 10-year median.

Inequality and economic hardship more than ethnicity or corruption

Incumbent President Ramaphosa, who was elected partly under an anti-corruption banner, has blamed the exploitation of ethnic divisions for the outbreak of violence. For example, Zuma's support base is particularly strong in the c20% of the national population from his home province of KwaZulu-Natal.

"It is a matter of concern to all South Africans that some of these acts of violence are based on ethnic mobilisation. This must be condemned by all South Africans at all costs as we are a nation committed to non-racialism and non-tribalism that is underpinned by the diversity and unity of all the people of South Africa, whatever their language, culture, religious beliefs and race," South Africa President, Cyril Ramaphosa.

However, there is a much deeper context here:

These are all factors which Ramaphosa might have been expected to address more effectively since he assumed power in 2018, even prior to the Covid shock. The next general election is due in 2024.

Severe economic inequality – South Africa has the highest Gini coefficient (63, where a score of 100 indicates maximum inequality) in the emerging markets we track.

Enduring poor perception of corruption – South Africa (44, where 100 represents the cleanest) scores relatively better on corruption than many other EMs.

Paralysis in state-owned enterprise reform and splits within the ruling ANC party (leftist elements more resistant to market-oriented reforms are more closely aligned to Zuma than Ramaphosa) – the fiscal deficit has worsened from 4% of GDP in 2018 to about 8% in 2022 (according to IMF forecasts). 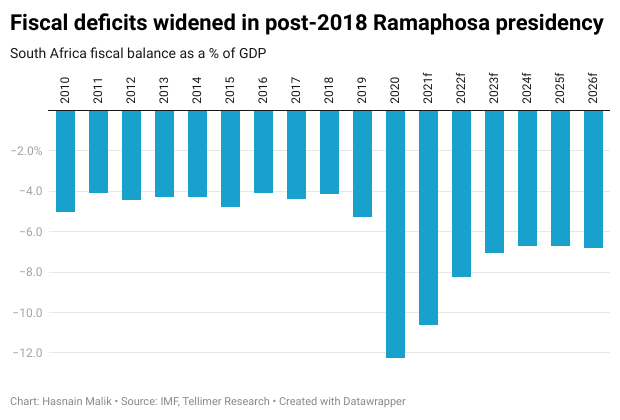 Inequality, corruption, and protests in EM

Domestic politics in EM after Covid-19: Authoritarianism and inequality, May 2020