BASELINE VIEW: ZAR remains highly fragile across many of the measures, yet in the context of the broad-based deterioration for many other countries is seeing a relative increase in attractiveness. With the local unit also at roughly fair value on a PPP basis, we should highlight that rooms for gains from a spot currency perspective are diminishing when considering a medium to longer-term perspective.

The best of a bad bunch

Monetary prudence remains the highest-scoring factor for the ZAR, scoring second best after China, highlighting what we would describe as a relatively conservative monetary policy, the record rate cuts notwithstanding. Note, however, that this is in the context of a 3.5/10 score, with 5/10 representing historical norms. Therefore, while tighter than its peers, The SARB has adopted a relatively loose monetary stance, which will reduce the ZAR’s natural barrier against weakening. In 2017, when SARB was running a relatively tight policy, SA scored 8.3/10 overall for monetary prudence.

Closer inspection of the indicators suggests that inflation risks exists within the model, with record low central bank rates and rising inflation potential characterising the global cycle. If it were not for weak consumptive demand, inflation pressures would be more prevalent. This raises the potential for SARB policy tightening in the months ahead, although the growth outlook remains fundamentally constrained, where rate hikes would exacerbate the pressures. Yet ZAR’s monetary prudence score still stands above many of its peers. The principal supporting factor within the framework is high real yields as a testament to a lower inflation cycle than has been the case in prior global financial crises. 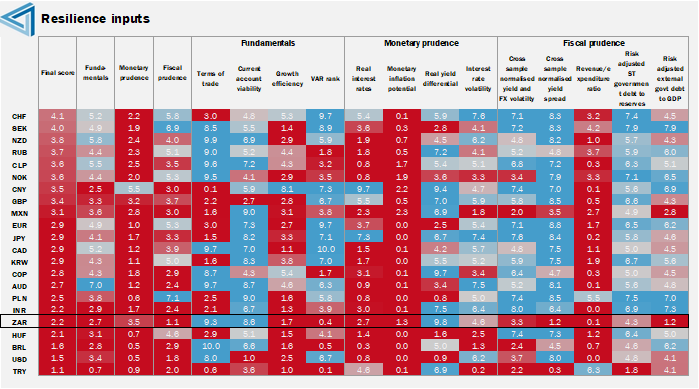 For some time, we have highlighted that the more hawkish era of SARB monetary policy that Reserve Bank Governor Kganyago brought to the SARB continues to remain a feature of the model. SARB is still among the tighter central banks when looking at the real interest rates component which shows a relatively tight stance compared to the EM average. This will be attractive to a carry-sensitive investor base hunting for yield, particularly with the ZAR’s impressive trade fundamentals reducing the risk of massive ZAR weakening episodes. This is evidenced in terms of trade and current account viability scores of 9.3/10 and 8.8/10, respectively. The current monetary prudence ranking suggests that the central bank stance has been relatively tight in recent years, but loosening has occurred. SARB rate cuts have done more to cushion existing debt obligations than ignite a fresh rise in credit growth, with low inflation also a function of the fundamentally weak growth environment. Fiscal and political risks will be reducing the overall investment in SA, with many on the fence on whether the government’s lofty promises of reform will reach fruition.

The charts below consist of the inputs into the monetary prudence measure. Readers should note that the scores for the ZAR are higher than the EM average, which will be one factor raising the ZAR’s relative attractiveness. This will support the ZAR, particularly with the Fed in a very loose policy stance as reflected the USD’s monetary score sitting at all-time lows. However, the primary supporting factor of the overall score is the real yield differential, encapsulated in the red box. A soft inflation cycle will be raising the relative attractiveness of SAGBs at present, mainly as the ZAR is less prone to weakening from a PPP perspective. 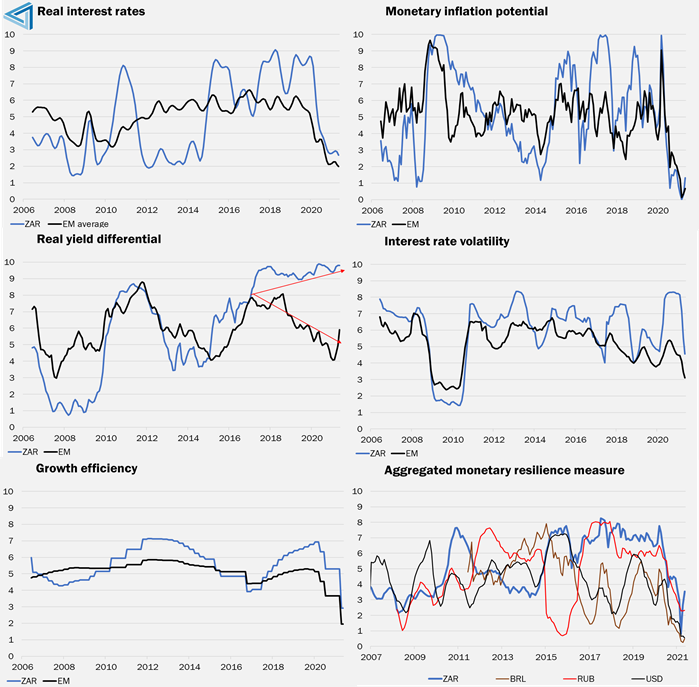 In SA, inflation risks are relatively benign when compared to prior cycles. Given the weak growth recovery seen so far, rate hikes would risk even weaker consumer demand. Breakeven rates also point to scope for a more subdued increase in inflation pressures, with the 5y up to 4.61% at its latest print. This is pricing in the thesis that inflation will be much lower in this cycle due to a fundamentally weaker economy. High tax rates and an oversized government will continue to stifle growth potential. Furthermore, inflation of 4.6% would be comfortably within the SARB target band. Notwithstanding all the above, investors still expect rates to rise 150-200bp over the next two years, keeping the yield curve steep and supporting ZAR through higher real rates.

Receiving fixed rates at these levels would be acting on the belief that inflation will remain contained. This is plausible amid low private sector credit growth, while M3 money supply growth has barely topped the rate of government borrowing, implying that not much new credit is directly entering the private sector despite the aggressive rate cuts in 2020.

And in an environment of low money supply growth, any external shock to prices will be recessionary rather than inflationary as the substitution effect takes place. This goes some way in explaining the weak retail sales result in March, with the headline number coming in five percentage points below expectations at -2.5% y/y relative to March 2020 where SA was already in recession. Household savings are rising by around 15% y/y, primarily the result of improving debt service costs for those who have a mortgage and other debt payments linked to prime as another factor supporting a more balanced trade account. A 350bp rate cut will have reduced the cost of a single repayment on a 20-year mortgage by around 22%, and on a 5-year car loan by around 8%. 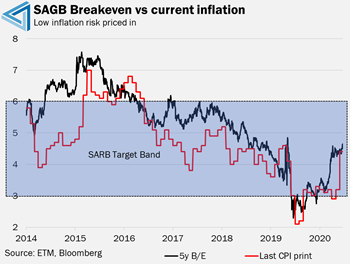 While SA scores relatively high on its monetary attractiveness scoring, this results from a steep yield curve and a contained inflation cycle than tight monetary policy conducted by the SARB. It suggests that there could be room for the SARB to hike rates in the coming months, although for now, the market remains primed for a hold in rates until the effects of COVID on the economic cycle are more apparent. Hikes before then could occur if the Fed is forced to reduce its level of monetary stimulus against the backdrop of rising inflation risk. MPC member comments have suggested that the SARB will favour a hold in rates for as long as the ZAR maintains its composure, and with the current account deep in surplus territory, this seems likely to be the case for some time still. At the same time, the potential for further easing is moderated by the risk of fiscal crisis, which remains a risk to the highly encumbered private sector. Whether one looks at very restrictive labour market policies or the disfunction of SOEs, the government has much that it needs to urgently address if it is to make lasting progress in returning SA to sustainability, as the rating agencies continue to warn.