The South African Reserve Bank (SARB) hiked its repo rate by 25bps to 3.75% yesterday in a split 3/2 decision (3 hike/2 hold, versus the unanimous vote to hold at the last MPC meeting), meeting the expectation of 11 of the 21 analysts (11 hike/10 hold) surveyed by Bloomberg.

The decision came on the back of a slight upward revision to its inflation forecasts. It is now projected to rise to 5.3% by year-end from 5% in the previous meeting, before stabilising at the midpoint of the SARB’s 3-6% target over the medium term, but with risks skewed to the upside.

On the face of it, the need to hike wasn’t abundantly clear. Inflation held steady at 5% yoy in October, just above the 4.5% mid-point of the SARB’s target range, and core inflation stayed flat towards the bottom of the band at just 3.2%.

Further, expectations have remained relatively well-anchored, with both survey- and market-based indicators remaining near or just above the middle of the target range.

With growth projected to remain below 2% over the medium term and the output gap not expected to close until 2024, the SARB has also initiated its hiking cycle against a weak economic backdrop. 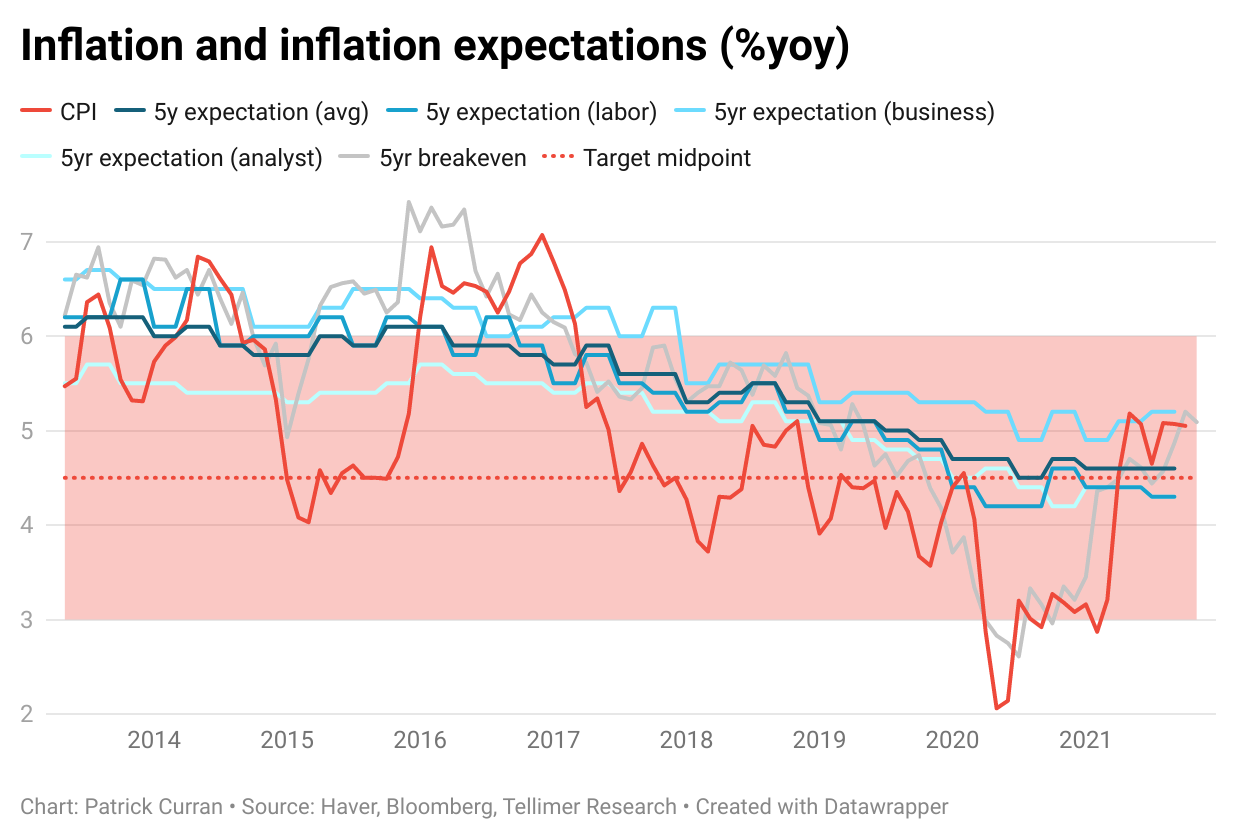 However, as we highlighted last weekend, concern is rising that global inflation may turn out to be stickier than initially anticipated, prompting many EM central banks to pre-emptively hike rates to anchor inflation expectations and stay ahead of the curve as developed market central banks turn towards tightening.

From this perspective, the SARB’s prior inaction even as other major EM central banks began to hike could have left ZAR vulnerable and led to a de-anchoring of inflation expectations, which are much less sticky in EM compared with developed markets and much more difficult to re-anchor if they become dislodged.

Indeed, the MPC statement flagged this as a key concern, saying that “considerably higher global inflation and rising uncertainty about the normalisation path for interest rates continue to cause financial market turmoil and capital flow volatility"” Although the SARB sees ZAR as being broadly in line with fair value, it typically acts as a bellwether for EM risk sentiment (it is down 8.5% since the beginning of September versus 6% for the JP Morgan EM Currency Index). Yesterday’s hike can be seen as a pre-emptive strike to prevent ZAR depreciation from undermining the SARB’s price stability target.

Despite the MPC falling on the hawkish side of a relatively split consensus, ZAR dipped on the day amid perceptions of a “dovish hike”, falling 0.9% versus a 0.5% drop for the JP Morgan EM Currency Index. Given the split 3/2 decision and rhetoric that “a gradual rise in the repo rate will be sufficient to keep inflation expectations well anchored and moderate the future path of interest rates”, markets seem to think that the SARB may be at risk of falling behind the curve. And with current account projections revised weaker, the backdrop for ZAR is less favourable than it was in September. 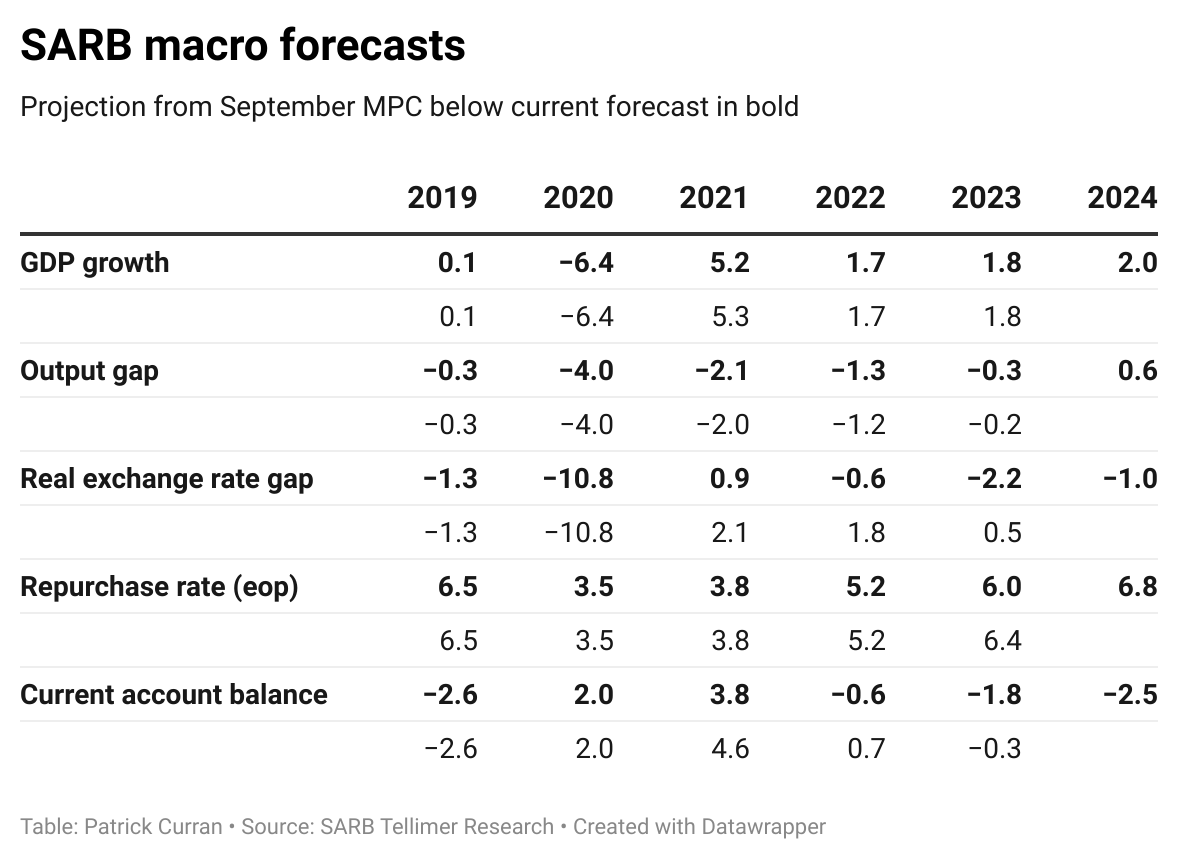 We think yesterday’s MPC decision was a prudent one, helping to anchor inflation expectations and pre-empting tighter developed market monetary policy to protect ZAR from rising financial market volatility. While the hike was probably not strictly necessary given the weak growth and low inflation outlook, South Africa’s growth constraints continue to be structural and inflation risks are undoubtedly tilted to the upside, making a modest hike a relatively low-cost way to support price stability and keep a lid on inflation expectations if rising global inflation ends up being more than just a “transitory” phenomenon.

The FRA market is currently pricing in 36bps of rate hikes over the next month and 188bps over the next year, which implies an average of c30bps of hikes at each of the next six MPC meetings. This is slightly more hawkish than the SARB’s Quarterly Projection Model (QPM), which sees rate hikes in every quarter through 2024.

However, unless inflation surprises notably to the upside, we think both projections are a bit too hawkish, and expect the SARB to hold at its next meeting in January 2022. If upside inflation risks (stemming from rising food and oil prices, a weaker currency, higher domestic import tariffs, and escalating wage demands) materialise, however, the SARB may turn in a more hawkish direction as markets and the QPM (which is a broad policy guide, not a specific target) suggest. 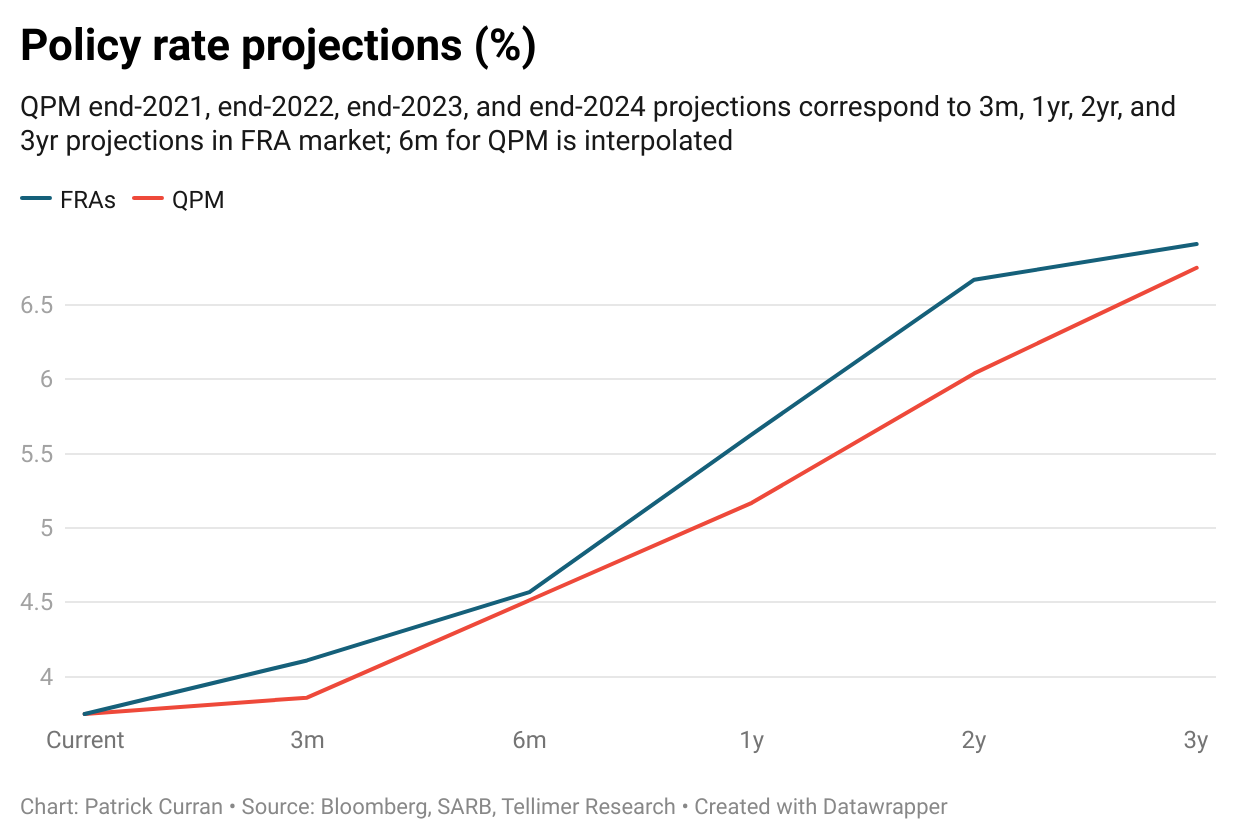 South Africa has to solve the Eskom problem, October 2020