The first of three US labour market indicators will be released today in the form of the private sector ADP data. Investors appear to be on hold and range trading ahead of the releases, which will offer a real economy perspective on one of the mandates the Fed targets. The USD has consolidated and appears to have formed a base with multiple attempts to crack below 89.7 on the USD index failing. Some soft data in the next two days could see the USD resume its slide. However, any upside surprises hold the potential to bolster the USD quite significantly given the degree of depreciation the USD has suffered so far this year.

Nigeria: Nigerian President Muhammadu Buhari threatened to crack down on insurrections following a spate of attacks on the national electoral commission’s offices and other facilities. Buhari said on Twitter, “I receive daily security reports on the attacks on critical national infrastructure, and it is very clear that those behind them want this administration to fail.” Nigeria is plagued with rising insecurity issues that have seen Buhari and his administration coming under fire for failing to deal with them. With the country’s security forces already overstretched in the fight against an Islamist insurgency in the northeast, Buhari faces a tough challenge to overcome this, and his popularity amongst Nigerian citizens is likely to continue dwindling as a result. The failure to solve the security problems could cost support for the ruling party.

Botswana: The IMF announced that it had concluded its 2021 Article IV with Botswana yesterday. The directors of the fund stated that Botswana entered the COVID-19 crisis in a better fiscal position than most countries, given its careful management of mineral resources and a track record of strong policies and policy frameworks. They commended the government for its response to the pandemic however stated that there are downside risks to the recovery in 2021 which revolves around the path of the pandemic urging the need for a successful rollout of vaccines. The IMF directors equally supported the Bank of Botswana’s accommodative monetary policy stance however stressed that second round effects from supply shocks and price pressures will need to be monitored in relation to inflation. They agreed that the financial sector is sound, but encouraged the authorities to keep an eye on any risks that may manifest by enhancing reporting, stress testing and financial oversight. Finally, the IMF has predicted growth of 8.3% for Botswana in 2021, with a narrowing of the fiscal and current account deficits also anticipated. Inflation is expected to remain within the 3-6% target band over the medium term.

Zimbabwe: The Confederation of Zimbabwe Industries (CZI) appealed for the suspension of legislation that penalises companies and individuals for selling US dollars on the parallel market after obtaining them from official foreign currency auctions. The appeal by the lobby group was submitted to the Finance Ministry a week after President Mnangagwa announced penalties for companies and individuals from profiteering from selling hard currency.

Ethiopia: The ongoing crisis in Tigray continues to attract attention from the international community. According to Bloomberg, the US, Canada, and several European countries have called for a cease-fire in the Tigray region. The US embassy yesterday called for a cessation of hostilities by all conflict parties and unfettered humanitarian access so that aid can flow and hunger can be averted. This call was echoed by other countries, including France, Germany, Sweden, Denmark, UK and Norway. The call also came after the US last month announced that it imposed economic sanctions on Ethiopia to try and force Prime Minister Abiy to end the crisis in Tigray.

Ghana: Bank of Ghana Governor Ernest Addison announced that the central bank is in the advanced stages of introducing a digital currency. According to the governor, the e-cedi will have to go through three phases before it goes into circulation. A pilot program would determine whether the digital currency will be feasible before it goes into circulation. The introduction of digital currency is expected to occupy spaces taken by other existing cryptocurrencies. However, the E-cedi will have state-backing to minimise the volatility.

Ethiopia: The Ethiopian Health Ministry announced that COVID-19 cases continue to rise after registering 246 new cases in the past 24 hours, taking the nationwide tally to more than 272k. The African Centres for Disease Control and Prevention noted that the figures of Ethiopia’s COVID-19 cases account for about 6% of the continent’s total confirmed cases. Moreover, Ethiopia is among the countries worst hit by the virus in Africa, following SA, Morocco and Tunisia. The continued rise in coronavirus infections which has resulted in the delay of the election, remains a key challenge that will likely hurt the economic recovery.

Following intraday losses which pushed the local currency back above the 13.8000/$-handle, the South African Rand (ZAR) caught a tailwind and traded firmer through the local session yesterday, despite emerging market currencies coming under broad pressure. The ZAR was amongst a handful of EM currencies that snapped the general weakening trend stemming from a rebounding US dollar. The US dollar index (DXY) ultimately notched higher as low levels of risk-taking ahead of critical US employment data buoyed the greenback. Still, a series of technical breaks for the ZAR saw the local currency close 1.45% stronger on the day, just above the 13.5500/$-handle. 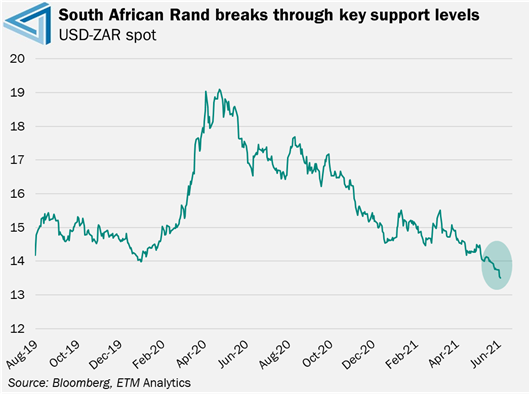 While it remains to be seen whether SA fiscal policy will turn more consolidative in the years ahead, prudent monetary policy has undoubtedly offered support during the pandemic downturn. Specifically, prudent central bank action and policy certainty has been a reason for ZAR resilience. Case in point has been the Turkish lira’s decline this year. In addition, the lira suffered another blow yesterday as President Erdogan continued to pressure the central bank to cut interest rates. Lower policy rates, especially in an environment where both developed and emerging market nations are gauging when to begin rate hiking cycles, will likely lead to capital outflows and currency depreciation.

Domestically, prudent monetary policy over recent years allowed the SARB front-load rate cuts last year to support the economy while still leaving policy rates high enough to entice yield-starved investors from developed nations. This has led to the ZAR’s outperformance over the past year, alongside high commodity prices and favourable trade dynamics, and explains the ZAR’s continued resilience.

Looking at the session ahead, in the spot markets, the USD has traded stronger this morning, while the ZAR has treaded water overnight around 29-month highs of 13.5100/$. Soft US data could see the dollar resume its slide; however, upside surprises hold the potential for the USD to rebound off its current low base.

Zambia has made some notable strides towards securing a bailout program with the International Monetary Fund and has shown signs that it is committed to rolling out much-needed structural reforms as required by the international lender. That said, the Southern Africa copper producer is yet to secure a deal with the IMF, and as such, investors remain wary of turning bullish on Zambian debt.

The degree of fiscal risk being priced into Zambian bonds is reflected by the massive premium demanded by investors for holding Zambian Eurobonds and by the fact that the curve is inverted. The shorter-dated 2022 Eurobond yield is trading at a notable premium to the longer-dated 2027 Eurobond yield. For context, Zambia’s 2022 Eurobond currently sits at 39.39%, significantly higher than levels seen prior to the COVID-19 outbreak, which accelerated the country’s pace of fiscal degradation over the past year. While elevated relative to the comparable bonds of its regional peers, Zambia’s 2027 Eurobond yield is trading at a notable discount to the shorter-dated 2022 bond at 17.90%. 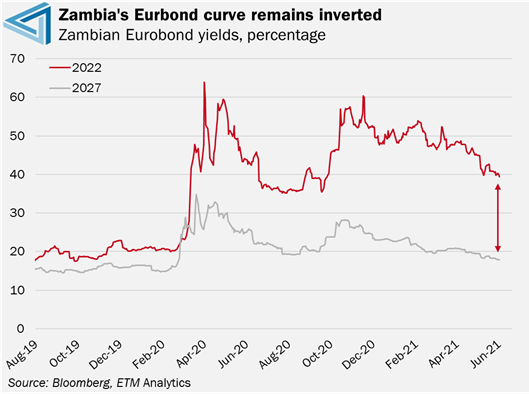 The inverted market structure is very uncommon and is reflective of a country in fiscal distress and facing an immediate fiscal crisis. Recall that Zambia defaulted on an interest repayment to bondholders at the backend of last year, essentially putting the country into default. Going forward, we are likely to see the degree of inversion compress in the weeks ahead with the government showing some signs that it is committed to implementing fiscal reforms required by the IMF in order to secure a bailout program and as international copper prices continue to soar, providing a boost to the country’s coffers. That said, given the extent of Zambia’s fiscal challenges, the bond curve is likely to remain inverted over the short to medium term, reflecting a country in default.

Macroeconomic: Egypt’s private sector remains under pressure in May

Data released by IHS Markit this morning showed that Egypt’s economy-wide PMI remained anchored below the 50-point neutral mark in May, thus extending the downturn seen since the end of 2020. Specifically, Egypt’s PMI gauge came in at 48.6 in May, up from 47.7 in April, marking the sixth consecutive monthly decline in the health of the non-oil sector. 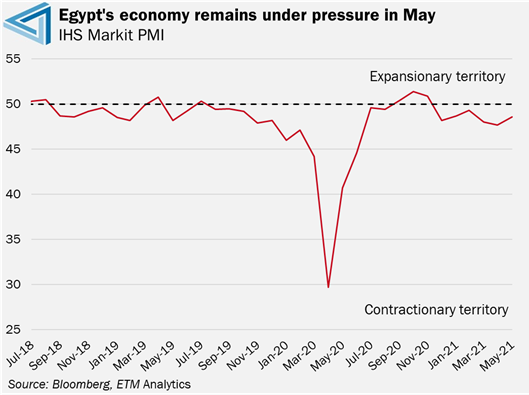 Details from the Markit report showed that Egypt’s private sector economy was weighed down by further decreases in output and new business. New order inflows decreased for the sixth month in a row but to the least extent since February. Businesses noted that customer demand was weakened by the COVID-19 pandemic. Respondents reported that there was some positivity from export orders which rose solidly.

In contrast to other African countries, the purchasing of new inputs in the non-oil sector fell as a result of weak demand during May. Recall that a marked rise in global raw material costs has pushed up input prices for most African countries. On the employment front, job numbers were still on the negative side in May amid weaker demand for staff and a slight decrease in outstanding workloads.

Looking ahead, although Egypt’s economy remains under pressure, firms remain optimistic about economic prospects for the year ahead, with the outlook for business activity rising to the strongest level since February 2018. Vaccine optimism, the easing of virus restrictions and the marked recovery in the global economy are some of the factors underpinning optimism over Egypt’s economic prospects for the year ahead.