4 May 2021
Published by ETM Analytics

Fed Chairman Powell yesterday stuck to the Fed's line on monetary policy and reaffirmed the current stance of remaining ultra-accommodative for as long as the goals of full employment and inflation are not met. However, he spoke optimistically about the fresh signs of progress and the growing momentum in the economy. That will be given further perspective later this week through the release of the latest employment and labour market data. It is, however, true that the economy will continue to gain traction through the remaining months of the year and that the strong ISM results will continue, albeit off the recent highs.

The US economy is opening up steadily, and arguably one of the strongest barometers is the reopening of the NY region on the 19th of May. As it was one of the hardest-hit cities in the US, the fact that it is now looking at lifting curbs gives one a clear sense of how far the US has come in its vaccination drive and assisting in driving the COVID-19 infection rate down. Retail stores, food services, and gyms are all due to open on the 19th, which will significantly boost overall economic activity in the region and the economy as a whole. The infections have fallen by half in the past month, with hospitalisations not far behind. Although the virus is still doing the rounds, it is now at a more manageable level, and hospitals will be able to cope with the new cases coming in.

Although still strong, the ISM data missed market expectations and caused the USD to pause. It has since regained its composure and showing signs of nudging a little stronger this morning, possibly in anticipation of some strong labour data later this week. It is also true that the market needed more of a clear out of stale USD short positions to allow for a platform to rebuild. Trading off a small long USD base is likely to be favoured by many, although ahead of the ADP data tomorrow, underlying momentum will be limited.

Oil markets are holding onto their gains from yesterday this morning, supported by optimism that the economic recoveries in the US and Europe will drive demand for fuel. The EU is set to start easing restrictions on travel for those who have been vaccinated, while in the US several states are continuing to ease restrictions and open up their economies. This is offsetting the concerns surrounding India and some other Asian nations, where new case levels are still high and have prompted new lockdown measures.

Kenya: Data published by the Central Bank of Kenya revealed that Kenya recorded a current account deficit of 5.1% of GDP in Q1 2021. The latest current account reading was lower than a deficit of 5.7% recorded during the same period in 2020. The central bank noted that the narrower deficit was a function of lower imports of oil, machinery, transport equipment and increased tea, horticulture exports, and remittances.

Zimbabwe: Mining houses in Zimbabwe are seeking permission to pay taxes in local currency after the central bank compelled them to convert more of their foreign exchange revenues at official rates. Recall that earlier this year, the Reserve Bank of Zimbabwe (RBZ) implemented rules forcing exporters to transfer 40% of their currency earnings to the central bank. However, due to the shortage of foreign currency, mining houses are appealing to pay for all statutory obligations in Zim-dollars to maintain foreign currency capacity to import critical inputs and sustain their operation.

Angola: The National Agency for Petroleum, Gas and Biofuels reported that they are in direct talks to award licenses for an unspecified number of oil blocks, separate from the nine blocks the state is currently auctioning. The Angolan energy regulator already started an auction for six blocks on April 30 in the Kwanza basin and three lower Congo basin. The agency noted that the coronavirus pandemic might pose some constraints to the auction process.

Nigeria: In a bid to stop importing coronavirus cases, Nigeria announced that they will deny entry to passengers who have visited India, Brazil and Turkey in the last 14 days. A statement issued by the Presidential Steering Committee on COVID-19 revealed that the travel restrictions will take effect on May 4 and is subject to review after an initial period of four weeks. With Nigeria expressing some concern about the potential for a third wave of the COVID-19 virus, the new measures are expected to help minimise the risk of a surge in cases introduced to the country from other parts of the world. It is worth noting that Nigeria joined countries like Kenya and Tanzania to restrict passengers from India.

Tanzania: In a bid to help contain the spread of the coronavirus pandemic, Tanzania stepped up its response by introducing new restrictions and reimposing several measures that it had previously scrapped. President Samia Suhulu Hassan made a policy U-Turn on the COVID-19 response as healthcare facilities became overwhelmed by patients displaying symptoms of the virus. Amid the increased concerns of the third wave, the health ministry announced that all travellers entering Tanzania will be subjected to enhanced screening for COVID-19 and those arriving from countries experiencing surges (i.e. India and Brazil) will have to undergo mandatory tests. Moreover, travellers arriving from places the WHO has confirmed the presence of new variants will also be subjected to a 14-day mandatory quarantine.

Forex: Ugandan shilling remains on the front foot at the start of May

The bullish bias in the Ugandan shilling (UGX) remains entrenched at the start of May. The UGX extended its rally to a fifth consecutive session on Monday, with the shilling eking out gains of 0.16% against the dollar on Monday to reach its strongest level since December 2016. The appreciation in the UGX has been partly driven by a persistent slump in appetite for dollars by local investors.

The strengthening in the UGX yesterday comes on the back of healthy gains in the shilling in April. Specifically, the UGX gained 2.57% against the dollar last month, making it the second-best performing African currency in April. April marked the UGX’s biggest monthly gain since July 2018. Aside from the reduced dollar demand, the strengthening in the UGX has been supported by broad-based dollar weakness, foreign inflows from multilateral lenders like the World Bank and the favourable real rates in the country. 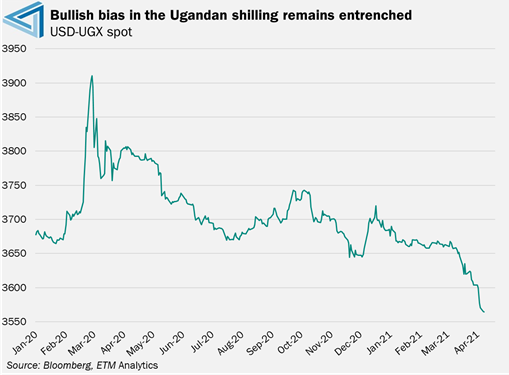 While the bullish bias in the UXG remains entrenched at the start of May, rising fiscal challenges in Uganda are likely to limit the gains realised by the UGX going forward. Recall that the government announced in March that it had broken its domestic debt ceiling to a level which it calls unhealthy domestic borrowing. Moreover, the government said that the total debt pile is expected to rise to 52% this year. This figure is also above the 50% debt ceiling that Uganda agreed on with the other East African Community countries.

South African government bonds kicked off the new month on the front foot after National Treasury announced a massive cut to its weekly debt auctions. National Treasury said in a statement released on Monday afternoon that its weekly vanilla bond issuance will drop from R4.8bn to R3.9bn as of May 11. The inflation-linked bond auctions will remain unchanged at R1.2bn. National Treasury added that the fixed-rate non-competitive bond auction amount would remain at 50% of the new auction level, split between the Electronic Trading Platform and the primary auction at 60% and 40%, respectively.

South African government bonds have received healthy bidding interest this year as investors search for yield in emerging markets. National Treasury said in its statement released on Monday that government revenues have been strong and borrowing need will be less than previously expected. Note that this is the second time in two months that the weekly auction amount has been reduced.

Given the sensitivity of South African bonds to fiscal developments, yields on the long-end of the South African bond curve dipped on Monday as the market reacted positively to the news from National Treasury that it will lower its weekly debt issuance. South Africa’s longest dated local currency bond, the 2048 bond yield, fell by 14bps to 11.01% on Monday. 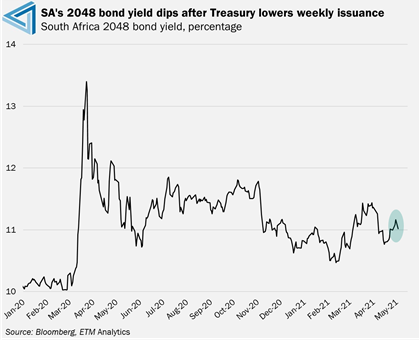 Going forward, the reduction in new debt supply and better than government revenues against the backdrop of lower than expected borrowing needs suggests that we could see a further bull flattening in the South African government bond curve in the months ahead. That said, given the extent of South Africa’s fiscal challenges, we still expect a significant degree of steepness to remain entrenched in the South African government bond curve as investors continue to demand a sizeable fiscal premium for holding the country’s debt.

Macroeconomic: Tanzania reaches out to the IMF for additional project financing to support economic recovery

Less than a month after securing a deal with the World Bank, the Tanzanian government has reached out to the International Monetary Fund (IMF) for additional financing to help shore up its economic recovery. President Samia Suluhu Hassan said in an emailed statement seen by Bloomberg that Tanzania is seeking support for its economy as it recovers from the virus-induced slump in 2020.

The latest loan from the World Bank, which was approved last month, will go towards five major projects that are expected to aid in the country’s economic recovery. The $1.15bn worth of new funding from the World Bank is in addition to $4.9bn of projects already approved. On balance, the government’s strong push to roll out major projects, which include significant infrastructure projects, will undoubtedly help shore up the economic recovery. The IMF forecasts that Tanzania’s economy will expand by 2.7% in 2021 from 1.0% in 2020. 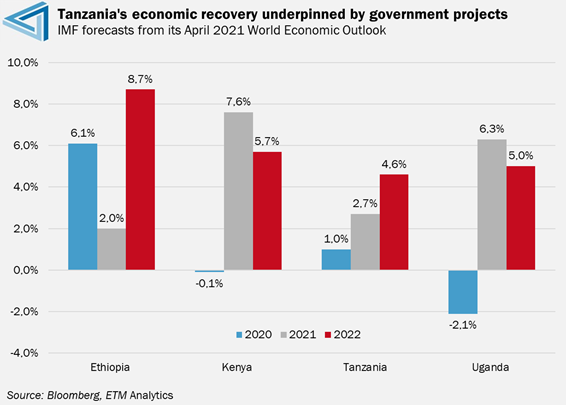