South Africa: The ANC's split is core to corruption, reform and unrest risk

In the past two weeks, Ramaphosa's troubles have escalated in the 'Farmgate' corruption scandal, the investigation of which he is accused of stifling – an independent parliamentary panel has found preliminary evidence sufficient to warrant further investigation.

And Zuma's troubles have resurfaced in relation to a prison sentence he was handed down for not cooperating with a corruption inquiry into financial conduct during his 2009-18 presidency – a court ruling found the grant of his medical parole unlawful.

The wider context of these events is exceptionally high youth unemployment of 50%, which means that structural economic reform is essential and urgent.

If Ramaphosa steps down or is removed, the prospects of a formal split in the ANC and an unstable coalition government after the 2024 general election increase. Without a sufficient political mandate, the implementation of those reforms grows even less likely.

South Africa equities (FTSE JSE Africa All Share index) are down 4% ytd in total US$ return terms, which is well behind Brazil (up 14%) but similar to Saudi Arabia (down 2%), the closest commodity-exporting peers in large EM, and well ahead of the broader EM index (down 19%).

In our EM Country Index, we rank these commodity-exporting large EM peers as follows (in descending order): Saudi Arabia, Brazil and South Africa.

Ramaphosa and Zuma tainted by corruption

'Farmgate' refers to the scandal that has imperiled the presidency of Cyril Ramaphosa, where he did not report the theft of cash from his Phala Phala farm in 2020 and was subsequently accused of obfuscating the source of that cash and impeding the investigation.

An independent parliamentary panel found, on 30 November, that there is sufficient preliminary evidence to suggest that Rampahosa may have violated the oath of the office of the president and that there are legitimate grounds for an investigation. A separate criminal investigation by police is ongoing.

The critical implications from Farmgate are that it has given the electorate cause to question Ramaphosa's credibility in advancing his anti-corruption agenda and has given the Zuma faction in the ANC an avenue to undermine the Ramaphosa one.

While most local observers decry the level of corruption in South Africa, it is worth pointing out that third-party measures of corruption place it in the company of countries that are, currently at least, consensus positives among foreign investors in EM, eg India and Mexico.

The end of ANC unity and dominance

Tensions and crises within the ANC are not new and date back to the 1920s, over the issue of how to deal with the Communists, and back to the 1940-60s, over whether to pursue moderate or militant struggle.

Before the five-yearly conference in 2007, a split was clear between supporters of Thabo Mbeki and those of Jacob Zuma. After the conference, the Congress of the People, led by Mbeki supporters such as Mbhazima Shilowa, Mluleki George and Mosiuoa Lekota, split from the ANC. After the 2012 conference, the Economic Freedom Fighters, led by Julius Malema, broke away.

Before the conference in 2017, two factions were evident – Jacob Zuma versus Cyril Rampahosa loyalists. This tension has spilled into the civil unrest during Ramaphosa's term, eg in the July 2021 riots sparked by the prison sentence handed down to Zuma, as well as malfunctioning state institutions, given the legacy of the blurring of party and state lines, or 'state capture', inherited from Zuma's 2009-18 presidential stint.

The ANC survived those defections. The problem now is that it is unlikely that a split between the Ramaphosa and Zuma factions would leave either with sufficient parliamentary seats to govern on their own.

Emerging markets are sprinkled with examples of the fragmentation of dominant political parties or movements to emerge from an initial liberation or democratic struggle: eg KANU in Kenya and PDP in Nigeria in Sub-Saharan Africa, UMNO in Malaysia in Southeast Asia, the Muslim League in Pakistan in South Asia, Solidarity in Poland in Eastern Europe and the PRI in Mexico in LatAm.

All of these examples show that parties are almost never put back together once the split occurs, particularly after the charisma, grounded in the initial struggle, of the founding leaders fades, either as they establish their own patronage networks, or they pass away, or the electorate grows young enough not to remember the founding era struggle.

Short term, the potential fall of Ramaphosa may derail his hitherto likely victory in his ANC party's leadership election in December and the hitherto likely victory of a sufficiently united ANC, under his leadership, in the 2024 general election. An impeachment by parliament, which elects the president, is possible as well but unlikely given the ANC has 58% of seats, given a two-thirds majority is needed for an impeachment.

Longer term, if Ramaphosa falls, then both the implementation of the anti-corruption and market-friendly, economic reform policies that he publicly champions, in contrast to his predecessor Jacob Zuma, and the unity of the ANC, which has ruled South Africa since the fall of apartheid – with 58-70% of seats in the six elections since 1994 – is at risk. 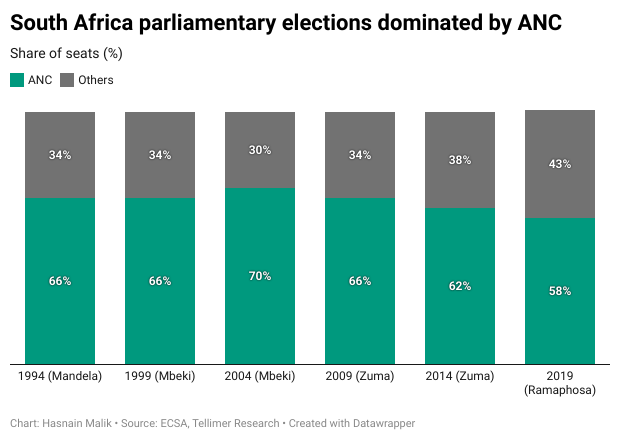