The USD remains on the defensive as data released so far this week has not done enough to build expectation of a taper. Quite the opposite, investors will feel comfortable that the Fed will persist with its ultra-accommodative stance and that the current fundamentals, reflected through the ballooning twin deficits will continue to erode the broader value of the USD. Technically, some support has been found in the past three trading sessions just below the 89.70 level of the trade weighted USD, but a punch below that will likely trigger another run against the USD.

South Africa: The South African Reserve Bank once again voted to keep interest rates unchanged at yesterday’s MPC meeting. The vote was unanimous for the second consecutive meeting, suggesting that the possibility of any further rate cuts is now completely ruled out. Inflation estimates for this year were revised lower alongside 2022’s growth forecasts, highlighting the need for policy to remain accommodative and pouring cold water on any bets for rate hikes in the coming months. The QPM model still sees the Repo Rate at 4.00% by the end of the year, but as mentioned before, this is merely a guide and does not mean for certain that hikes are coming in the final quarters of the year.

Sub-Saharan Africa: The World Bank said that the slow rollout of COVID-19 vaccines in Africa could cost the continent $14bn a month in economic output. African countries have been lagging in securing vaccines as wealthy countries are hoarding vaccines for their citizens and supply bottlenecks that are being worsened by surging cases and deaths in India, which has led the country to ban vaccine exports. This has ultimately resulted in a much slower rate of vaccination in Africa than in other parts of the world. To date, only less than 0.5% of the continent’s roughly 1.3bn people are fully immunized, Bloomberg reports.

Ethiopia: Progress is being made on the upcoming elections after the National Electoral Board of Ethiopia announced that it will hold the election on June 21, more than two weeks later than originally planned. Recall that the electoral board postponed the election date for the second time due to some challenges in getting people registered and due to the crisis in the Tigray region. Speaking to the media, the board’s communication adviser Soliana Shimelis was quoted saying that “the board will use the additional  time to recruit and train more than 100k poll workers and fine-tune logistics.”

Zimbabwe: Zimbabwe’s Agricultural Marketing Authority (AMA) said that the government suspended corn and corn meal imports with immediate effect. Speaking to Bloomberg, Clever Isaya, CEO of AMA, stated that import permits for corn and corn meal will no longer be issued and permits issued before the announcements will expire on May 30 to allow for smooth movement of goods in transit. Zimbabwe is expected to harvest 2.7mn metric tons of corn in the 2020/21 season, an increase from about 907.63metric tons a year earlier.

Nigeria: In a bid to end a government subsidy drawing down limited funds, Nigeria’s state governors backed the full deregulation of the gasoline market and backed a report by Kaduna state Governor Nasir el-Rufai for an increase in pump prices to NGN 385/ltr. Removing the fuel subsidy that is said to cost the government as much as NGN 210bn a month is one of the conditions required by the World Bank for the government to receive a $1.5bn loan. This issue has been tabled for some time now. The decision was delayed after President Buhari backtracked on the plan to phase out the subsidy earlier this year amid concerns that price increases might cause social unrest that could hurt the economic recovery.

Uganda:The African Development Bank (AfDB) agreed to lend Uganda $348mn for road projects. According to the bank, the $276mn loan will be used for the upgrade of 67km of roads in the capital and the second loan worth $71.8mn will be for the upgrade of Kanale-Lake Bunyonyi/Kisoro-Mgahinga road projects in the southwest of the country. The persistent borrowing by Uganda is aimed at driving President Museveni’s infrastructure development agenda that is expected to help support economic growth.

It was a busy day in Egypt yesterday. According to the state-run news agency MENA, Egypt has announced that a ceasefire between Hamas and Israel in Gaza would start at 02.00 am local time. The Egyptians would be sending two security delegations to Tel Aviv and the Palestinian territories to ensure compliance and implementation following the deadliest fighting in decades over the past 11 days. Israel’s cabinet has met and approved the truce, so it is hoped that a ceasefire can be achieved.

On the fiscal front, the traditional Thursday T-Bill auction took place yesterday with 182 and 364 Day T-Bills on offer. There was more robust demand for the longer-dated paper, with the Central Bank placing EGP8.995bn with a clearing yield of 13.342% at a bid to cover ratio of 3.36%. The shorter-dated paper received a bid to cover ratio of 2 and cleared at 13.386% with EGP16.411bn placed.

The 12.30 pm Central Bank FX Fix came in at 15.6835 yesterday in the final day of the Arab work week. The fix has been contained between the 15.68-15.69 mark for the entire week as the market continued to consolidate following a bounce off the Egyptian pound (EGP) highs seen earlier in May. The EGP remains resilient, gaining some 0.36% against the greenback on a year-to-date basis in strong contrast to the Ethiopian birr (ETB), Africa’s worst performing currency in 2021, which has shed some 9.63% against the USD. Underpinning the resilience in the EGP is prudent monetary policy, which has translated into positive real interest rates. Egypt’s high real rates continue to support the currency’s carry appeal, which is amongst the most attractive in the world. 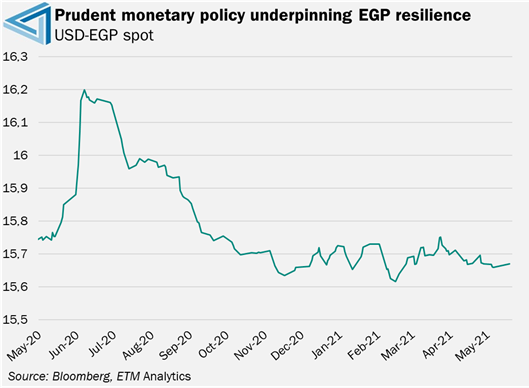 Fixed Income: Uganda’s fiscal dynamics to be scrutinized by Moody’s this evening

It is a busy end to the week for Sub-Saharan Africa, with three sovereign credit ratings slated for this evening. Moody’s is set to release credit rating updates for Namibia and Uganda tonight, while S&P is slated to release a credit rating update for South Africa. While all three decisions will take place after the market close, any rating movements could have serious ramifications for financial markets in the sessions ahead. Ethiopia’s rating downgrade earlier this week is an excellent example of how much of an impact a sovereign credit rating can have on a country’s fixed income market.

At its previous meeting on 20 November 2020, Moody’s opted to leave Uganda’s sovereign credit rating unchanged at B2 while affirming its outlook at stable. Moody’s said that the decision to affirm the rating balances Uganda's long-standing credit challenges, including low wealth levels, narrow economic base, and elevated susceptibility to event risk, as well as deteriorating fiscal and debt affordability metrics that have been further aggravated by the coronavirus shock, against credit supports including robust growth potential, gradually improving institutional capacity and support from the international community. 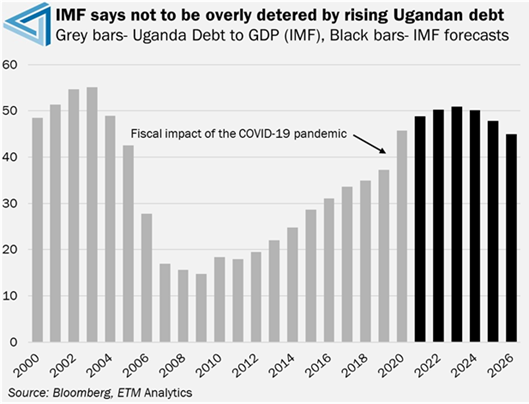 The global ratings agency said that Uganda’s stable outlook reflects credit risks being broadly balanced. Moody's expects that the track record of macroeconomic stability will be maintained amid the current challenging environment despite the anticipated fiscal deterioration induced by the pandemic and the electoral cycle. Moody’s added that it expects that additional forthcoming support from the international institutions will help to limit the erosion of debt affordability metrics and contain liquidity and external vulnerability risks.

While there has been a notable degradation in Uganda’s fiscal position this year due to the COVID-19 pandemic, the fiscal decline has been in line with similarly rated sovereigns. Going into tonight’s rating review our base case is that Uganda will avoid any negative rating action. However, the risk of negative rating action can't be ruled out.

Arguably of more importance is S&P’s sovereign credit rating of South Africa, given the real risk that the country could be downgraded further into junk status. The bond market will be on edge today due to the risk that S&P decides to downgrade SA amid limited progress in state reform, such as SOE privatization and state job shedding.

We remain sceptical of the potential for lasting reform in the absence of more hard-hitting decisions by the government. Whether one looks at very restrictive labour market policies or the disfunction of SOEs, the government has a lot that it needs to address urgently if it is to make lasting progress in returning SA to sustainability. These are some of the key aspects that we expect S&P to focus on in its review tonight.

The global credit rating agency said in its November review that South Africa could face negative rating action if economic prospects fail to recover during the forecast period and fiscal financing or external pressures mount. S&P noted that this could, for example, arise from an unsustainable increase in the government's interest burden as a proportion of revenue. The agency added that it could also consider a downgrade if the rule of law, property rights, or enforcement of contracts were to weaken significantly, undermining the investment and economic outlook.