On the sidelines of the IMF Annual Meetings in DC last week we held discussions with the SARB’s Head of the Economic Research Department and MPC Member Christopher Loewald, the IMF team headed by Mission Chief Papa N’Diaye, and with many of our clients about the economic outlook for South Africa. The following note distills our key takeaways from those discussions and the updated World Economic Outlook (WEO) projections, and the words are our own.

Discussions on South Africa were largely business as usual, with a vastly improved outlook compared to this time of year in 2020 on the back of improved terms of trade but little change since this time last year. Whatever reform momentum that may have emerged in the summer of 2021 has since given way to the stasis that we have come to expect from the policymaking front in South Africa, with the looming ANC elective conference in December likely to preclude any meaningful progress before year-end and the campaigning for the May 2024 general election creating only a limited window after that.

The IMF has revised its 2022 growth projection up slightly since April, but it is still down relative to last October due to worsening loadshedding and the flooding in KZN, while the 2023 projection has been revised down by 0.3pp relative to the previous two WEO updates due to the global growth slowdown and tightening of financial conditions (less severe than the -0.9pp global average). That said, the IMF’s medium-term growth projection of 1.4% reflects severe structural problems, and may even be seen as optimistic compared to the SARB’s own potential growth forecast of c1% from its latest MPC meeting. 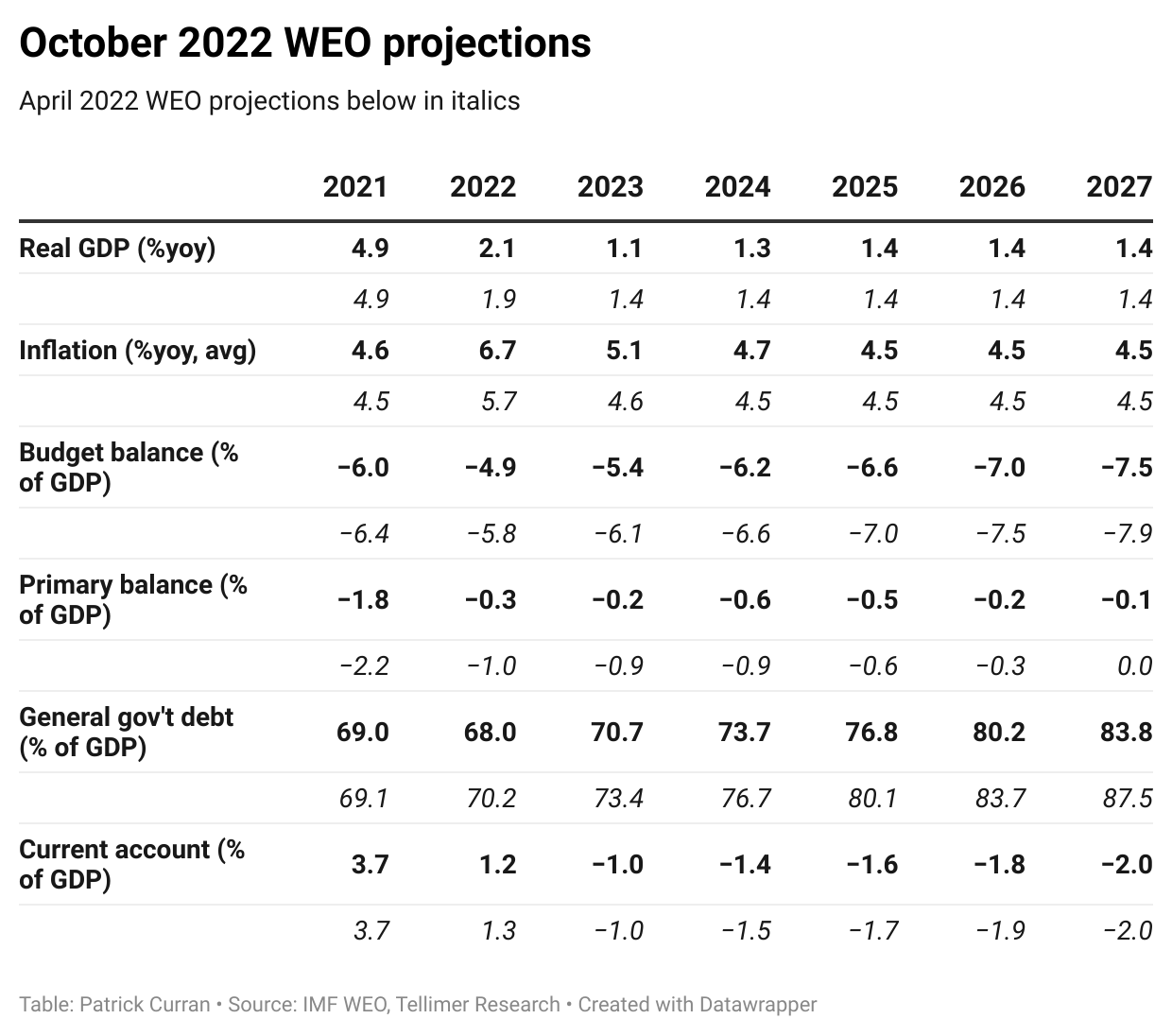 Record loadshedding and, more recently, strikes by workers at state-owned port operator Transnet have laid bare some of South Africa’s key constraints and prevented South Africa from realising the full benefit of the current commodity price boom. The crisis at Eskom has put the government into crisis management mode, forcing them to finally confront the severe issues that have been left to fester but can no longer be ignored. While the increased urgency is welcome, though, it will be a long time before the current measures bear fruit, and in the meantime the economy will continue to pay the price.

Inflation has been revised up versus the last two WEO updates, but is projected to decline to the SARB’s 4.5% target midpoint over the medium term. However, both survey and market-based indicators of longer-term inflation expectations have risen over the course of the year, notwithstanding some recent moderation, leading some to worry that expectations could become de-anchored. Overall, though, there seems to be little concern about the SARB’s ability and willingness to defend its price stability mandate, and markets are pricing in what looks to be an overly hawkish 175bps of hikes over the next year.

On the fiscal front, the WEO’s forecasts have improved since April but still differ significantly from those of the National Treasury (NT), with the budget deficit projected to widen to 7.5% of GDP and public debt to rise near 85% of GDP over the medium term versus the NT’s targets of c4% of GDP and c75% of GDP, respectively. With limited evidence that the government will be able to hold the line on its wage bill and SOE transfer targets, we also think slippage is likely. Rising interest rates will also continue to erode fiscal space and make debt stabilisation even more difficult. That said, the MTBPS on 26 October will provide an important signal of how fiscal policy has evolved since the February budget.

Our conversations were not all doom and gloom. South Africa also has some important buffers not enjoyed by many of its peers, with nearly 90% of its public debt stock denominated in local currency, an average maturity of 13.25 years on its domestic debt and 14 years on its external debt, a positive net international investment position exceeding 15% of GDP, a freely floating currency that effectively absorbs any external shocks, and relatively strong institutions including the SARB, NT and judiciary, among others.

As such, South Africa is still far from the precipice, but the direction of travel is clearly negative. South Africa will not be able to sustain under the current model forever, especially if global financial conditions remain tight. However, there appeared little optimism that South Africa will be able to reverse course. The series of domestic and external shocks experienced in recent years have failed to galvanise meaningful change, and with the luxury of ample (but shrinking) runway it is not clear what could spur a reckoning that forces the tough decisions needed to set South Africa on a sustainable long-term path.

That said, it is not too late to right the ship. While the prospects look grim from where we sit now, with the same issues and solutions having been discussed ad nauseum at the Annual Meetings and beyond for at least five years running, we hope that this month’s MTBPS confronts South Africa's fiscal challenges head-on and that the ANC’s elective conference in December injects new energy and urgency into the reform agenda as we enter 2023. Until then, South Africa’s economy will continue to forge ahead, still far from skirting disaster but with the road leading inexorably towards the cliff. 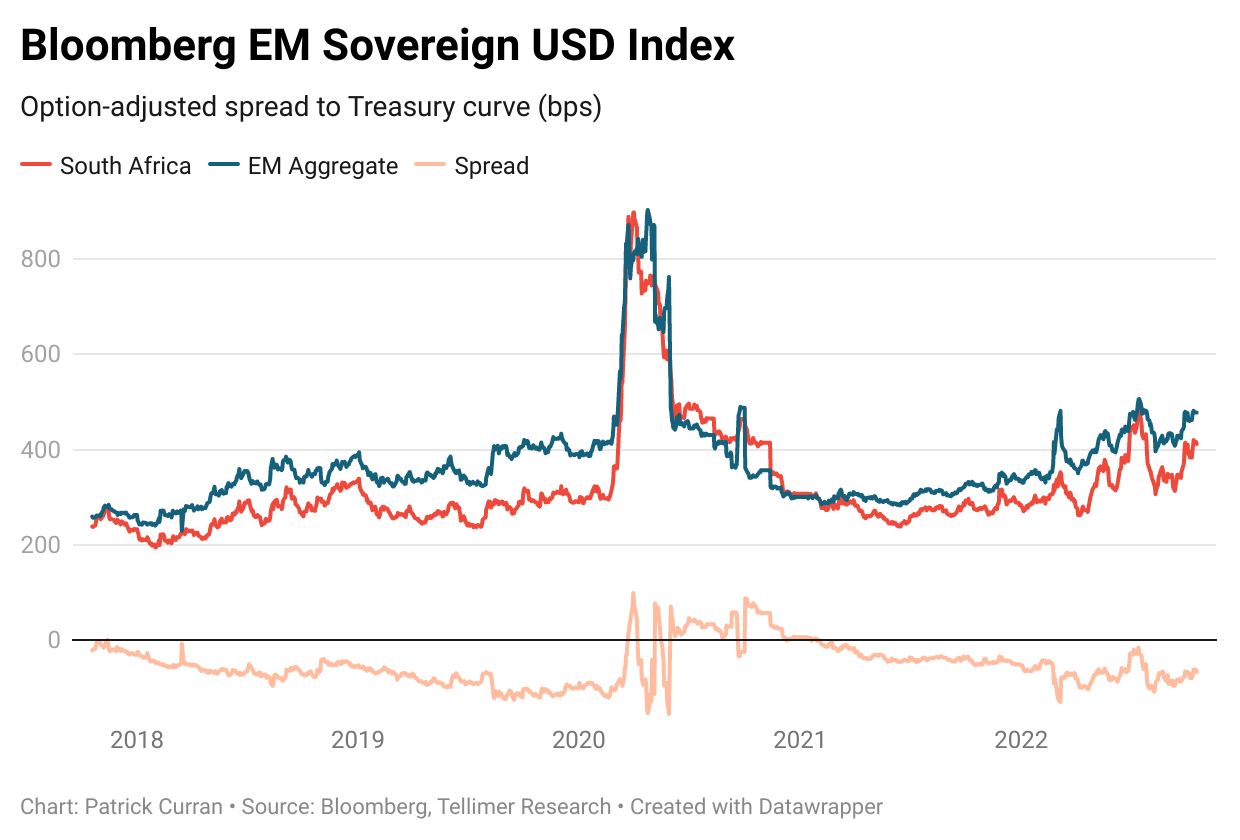