South Africa’s Finance Minister Tito Mboweni delivered the country's first-ever emergency budget via video stream to a mostly empty parliamentary chamber today. Markets were already prepared for the worst, with Mboweni announcing in April that the FY 20/21 deficit could swell into double digits amid massive revenue shortfalls and a leaked presentation by Mboweni at the National Economic Development and Labour Council last Friday showing preliminary estimates of debt reaching 80.5% of GDP this year and surpassing 100% of GDP by 2025.

At the event today, Mboweni announced a deterioration of the consolidated deficit to 15.7% of GDP this year (from 6.3% of GDP in 2019/20 and a preliminary 6.8% of GDP target), slightly wider than last week’s Bloomberg consensus of 13.7% of GDP. 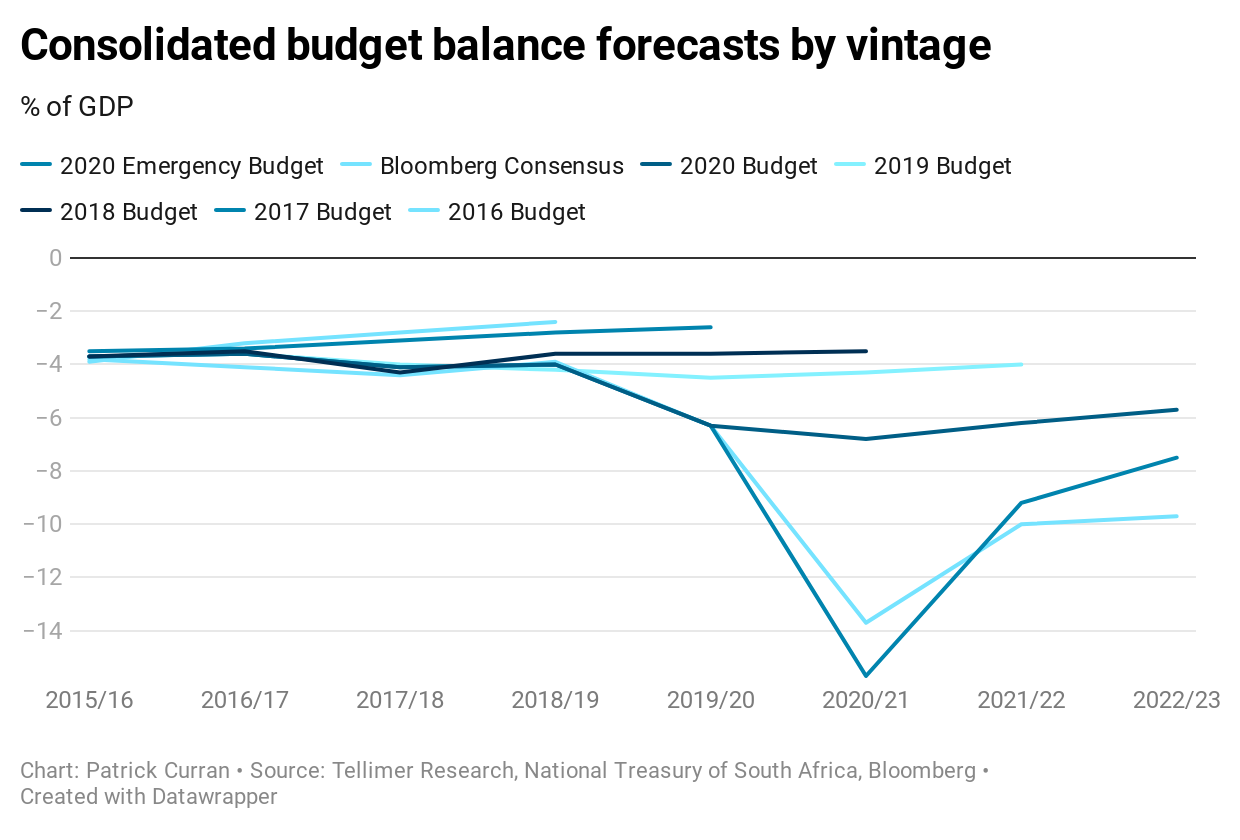 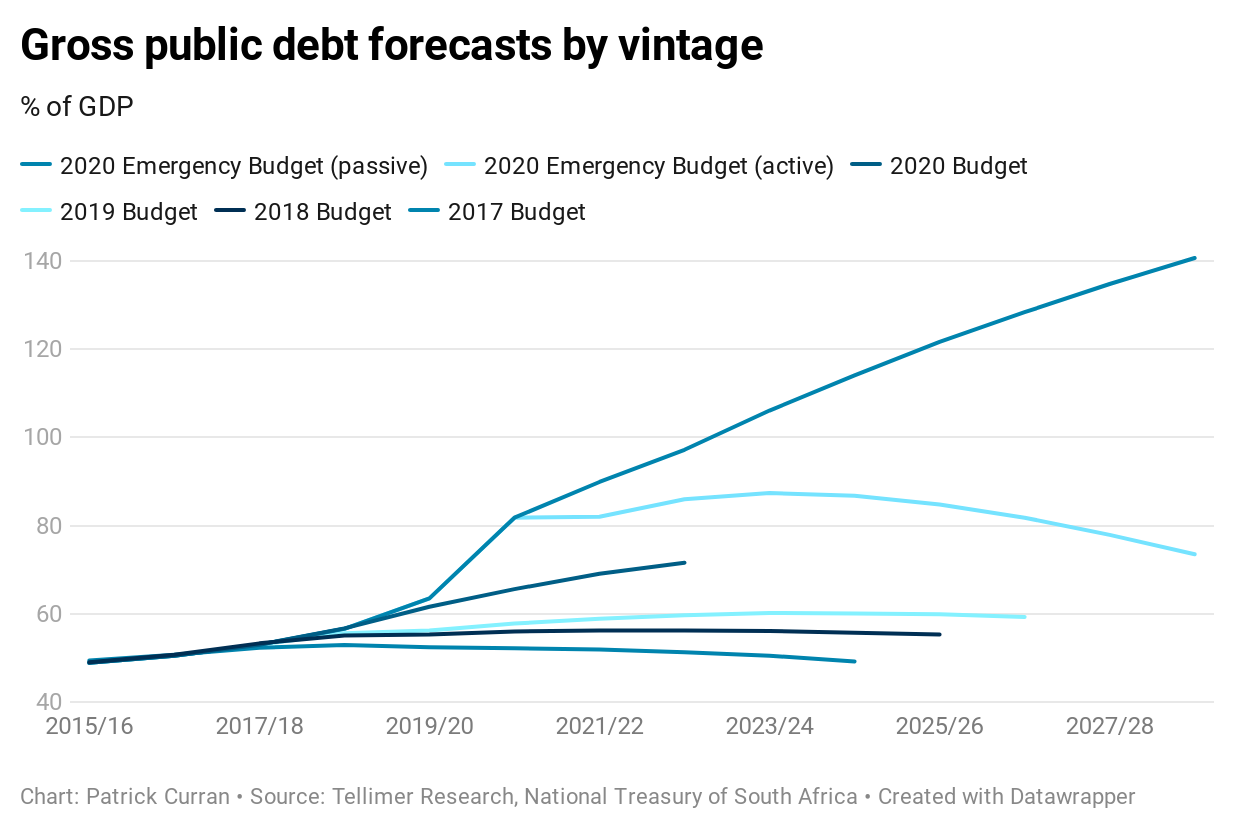 Pre-2020 anxiety over South Africa’s debt stock potentially breaching 60% of GDP and inability to consolidate the budget deficit below 4% of GDP now seem rather quaint. Admittedly, the seeds of fiscal slippage were already sown before the Covid-19 crisis, with the 2019/20 deficit of 6.3% of GDP far exceeding its 4.3% target amid rising transfers to key SOEs such as Eskom, the 2020/21 target revised up from 4.3% to 6.8% of GDP during this February’s budget statement, and the medium-term target pushed up from 4% to 5.7% of GDP.

Now the consolidated deficit is expected to consolidate from 15.7% of GDP this year to 9.2% of GDP in 2021/22 and 7.5% of GDP in 2022/23. Markets have taken this in stride, with the rand trading flat in the hours immediately following the budget and local/external rates largely unchanged. Markets had already priced in the news before the budget, with the 10-year government yield rising by c50bps over the past three weeks and the rand selling off by c5% over the past two weeks.

With the South African economy now projected to contract by 7.2% yoy in 2020, it has long been clear that revenue would fall far below initial forecasts. The main budget revenue is now expected to be cZAR304bn below the initial target in 2020/21, dropping to 22.6% from 25.8% of GDP. Whereas the February budget did not pencil in any tax increases in recognition that South Africa has probably passed the peak of the Laffer curve (with stagnant growth and a revenue/GDP ratio already amongst the highest in EM), the new budget envisions ZAR40bn of new tax measures over the medium term, which will make the growth recovery even more difficult.

Meanwhile, expenditure will see a net rise of ZAR36bn, with ZAR145bn in immediate on-budget Covid-19 relief measures, partially offset by reduction of ZAR109bn from the temporary suspension of baseline allocations and adjustments to the skills development levy. Factoring lower growth, expenditure will increase to 37.2% of GDP from 32.5%.

While the government’s ability to accommodate the ZAR500bn (c10% of GDP) Covid-19 relief package (including ZAR190bn of main budget spending over the medium term, ZAR70bn in tax policy measures and a ZAR200bn loan guarantee scheme) is encouraging, there is an utter lack of tangible expenditure-side reforms when the hood is lifted up. The Treasury needs to implement spending reductions amounting to cZAR230bn in 2021/22 and 2022/23 followed by further reductions in 2023/24 to stabilise debt at 87.4% of GDP, but so far has delayed any specifics until October’s Medium-Term Budget Policy Statement (MTBPS).

In all fairness, an emergency budget isn’t exactly the right platform to enact widespread reforms and the urgency required to formulate an emergency budget that satisfies that immediate needs of South Africans reeling from the impact of Covid-19 raises the hurdle even more. But on the other hand, I can’t help but think that South Africa has missed a crucial opportunity to strike while the iron is hot.

As the old adage goes, one should never let a crisis go to waste. While the Treasury remains a pillar of institutional strength, the fiscal slide of the past decade has been borne in part of the inability of the Treasury to rise above the messy ideological fray of ANC politics and implement the tough fiscal reforms needed to stabilise the debt burden. Since "Nene-gate" in 2015, South Africa has faced several "come to" moments where things appeared dire enough for the Treasury to seize the reins and make hard decisions, but repeatedly those windows of opportunity have closed without any meaningful action. The economic crisis South Africa finds itself in now is worse than anything it has faced since the end of apartheid, and far outweighs the impact of the 2008 global financial crisis. If the Treasury can’t take the reins from the government and push forward with reforms now, then when?

If the Treasury can deliver on much-needed reforms in the MTBPS and set debt back on a sustainable trajectory, then my doom-and-gloom predictions may prove unfounded. But I think it is more likely that the moment for major reforms has come and gone. As a rising risk premium continues to push up the cost of government borrowing, the fiscal space needed to right the ship will be increasingly consumed by a higher debt service bill. While markets remain relatively sanguine post-budget, the risk premium will only continue to rise as the prospects for reform look increasingly bleak. For now, we await the MTBPS in October to see if the government has the political will to correct course before it’s too late.