The EUR has slid against the USD throughout the past week to enter Friday’s trading session below 0.9800/dlr. The GBP has had an equally tough time, although the depreciation unfolded in the main through yesterday’s trading session. An aggressive hike to remain synchronised with the Fed did little to support the GBP, given the BoE’s warning that the UK economy was about to head into a prolonged recession. The cost-of-living crisis, the rate hikes and the austerity in fiscal policy will make life tough for the British public. The implication is that more aggressive hikes now will mean lower rates in the future and maybe even a faster reversal in those rates.

So the USD has had a good week and appreciated against most currencies, with one eye on the US non-farm payroll data to round off what has been a week of robust US labour data. Another strong reading today will only strengthen the Fed’s resolve to do more and trigger an even deeper inversion of the US yield curve to raise the probability of a recession. This will have longer-term implications for the US economy and the USD, but for now, the rise in risk aversion and rotation to safety has helped the USD retain some support.

Ethiopia: Prime Minister Abiy Ahmed on Thursday said the Ethiopian government had secured "100%" of what it sought in negotiations with Tigrayan rebels that yielded a breakthrough agreement to end a two-year war. The deal announced on Wednesday is seen as a crucial step towards ending the bloodshed and has been hailed by the UN and the US. The conflict has hampered efforts by Ethiopia's government to improve relations with international financiers as it awaits an International Monetary Fund loan amid efforts to restructure its debt.

Tanzania: President Xi Jinping has said that China is willing to expand imports from Tanzania and support Chinese companies to invest in the country. In a meeting with President Samia Suluhu Hassan, both leaders agreed to maintain exchanges and dialog and promote cooperation on infrastructure projects, green development, and the digital economy. The leader also agreed that China-Tanzania ties will be elevated to a comprehensive strategic partnership of cooperation. Note that China has also agreed to remove customs duties on 98% of products it imports from Tanzania.

Egypt: Egypt’s S&P Global PMI rose to 47.7 in October from 47.6 in the month prior. While the PMI reading was the highest since February, it remained in contractionary territory, pointing to a continued deterioration in operating conditions in the non-oil private sector, albeit at a slower pace. Survey results showed that business optimism among non-oil firms slid to the lowest in over a decade, as only 4% of firms gave a positive outlook for the next 12 months. Rising prices, supply problems, and weak global demand also drove new business and activity lower. Overall, the latest reading stretches the current deterioration sequence to just under two years and suggests the rising price pressures continue to dampen activity.

West Africa: The President of the African Development Bank Group (AfDB) said that the bank secured $15.6bn in investment interest for the construction of the Lagos-Abidjan Highway from a virtual Africa Investment Forum held in March. The highway, which carries three-quarters of trade in the West Africa region, is expected to help unleash greater growth, trade, and investment across the region.

Zambia: Zambia's Finance Ministry has noted that the Export-Import Bank of China (EximBank) will lead Beijing's team to renegotiate almost $6bn worth of loans that Zambia owes to Chinese state-owned creditors. EximBank is one of China's three policy banks and Zambia's single largest Chinese creditor. Note that investors and creditors are closely monitoring how China, the world's largest bilateral lender, is managing debt negotiations around the world. China has tended to offer debt relief by extending maturities rather than accepting write-downs on loans. The Finance Ministry also said that "negotiations with the committee are progressing well, and the IMF/World Bank debt sustainability analysis assumptions are one of the subjects under discussion.

Zimbabwe: The volume of gold production for the first ten months of the year rose by 34% y/y to 29,460.6kg. Meanwhile, miners produced 3,794.1kg of gold in October, up from 3,051.9kg a year earlier. Zimbabwe is aiming to produce 35 tons of gold this year, up from 29.6 tons in 2021, and increased output is a welcome development, given gold, along with other mineral exports, is the biggest source of foreign exchange

Oil: The tug-of-war between tight supply conditions and expectations of slowing demand continues to drive the oil markets while keeping price action quite volatile. After dropping nearly 2% yesterday, Brent prices are rebounding this morning, keeping the front-month contract trading around the $95 per barrel level. The tightening outlook for energy supply comes as OPEC+ will be making sizable cuts, at least on paper, to their oil production this month, while traders also brace for the start of EU sanctions on Russian crude from December onwards. Offsetting this are concerns over weakening demand. Major central banks this week have highlighted recessionary risks for some of the world’s largest economies, with the UK expected to enter a prolonged downturn while Europe faces a period of economic contraction given the ongoing energy crisis. China’s economy is also spluttering, which has seen Saudi Arabia trim its prices for oil sales to the region for December. With these concerns expected to persist, for now, oil prices will be capped even with the tight supply conditions currently facing the market. 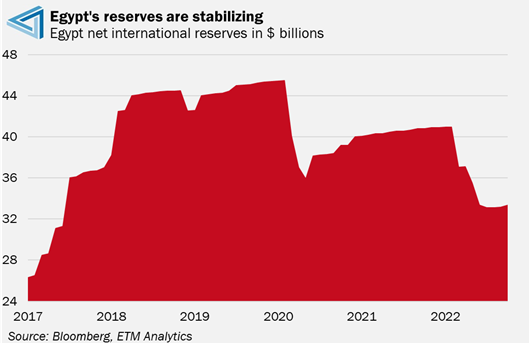 Increasing net international reserves, in addition to an incoming $3bn International Monetary Fund Loan and at least $5bn more to come from international partners, suggests that Egypt will be better suited to deal with its external funding gap and debt commitments. Note that the IMF deal came after Egyptian authorities sharply devalued the currency for the second time this year and signalled a shift from practices that kept the pound stable using foreign reserves.

The transition to a new foreign exchange regime will help Egypt address its funding gap. However, continued pound weakness will add to inflationary pressures and the cost of servicing foreign debt in the near term.

Fixed Income: Africa’s debt problems are worrying, but there are signs of support from the international community

While much of the focus for investors has been centred on monetary policy this week, fiscal dynamics should not be ignored. In fact, in Africa’s case, monetary policy and fiscal dynamics go hand-in-hand, given the impact that rising global interest rates are having on debt servicing costs and the ability of countries to fund themselves in the international debt market.

Although there has been some considerable movement on the debt relief front, with international lenders (IMF and the World Bank) and major creditors to Africa (China) agreeing to debt reprieve for several African countries, the number of African countries in debt distress has doubled since the onset of the Covid-19 pandemic. Key debt metrics, including debt-to-GDP and debt-servicing costs to revenue, have risen sharply over the past two and a half years. 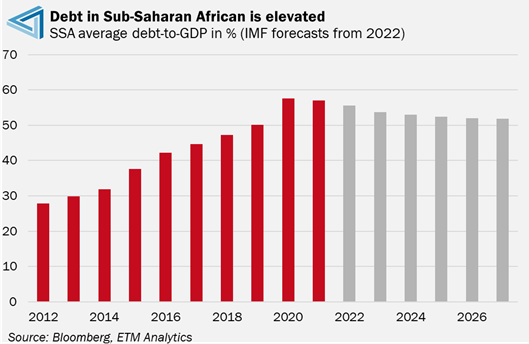 The increased fiscal risk in the region is reflected by the sharp rise in African USD credit default swaps and sovereign bond yields. As pointed out in a recent comment, the fiscal risk premium (Eurobond yield – comparable US Treasury yield) of a number of African countries, including Ghana, Zambia, Mozambique and Kenya, are trading near or in fiscal distress territory. While fiscal pressures on the continent are acute and a massive concern for investors, there are concrete signs that major African creditors are committed to avoiding a broad-based debt default crisis.

That said, debt reforms and financial aid from the international lending community will come attached with several strict requirements that lawmakers on the continent may be reluctant to adopt. Egypt and Zambia are examples of two countries that have conformed to these requirements, which has helped them secure financial aid from the IMF. The big question for investors will be whether lawmakers in other fiscally fragile African countries will agree to these terms, which are often politically unfriendly.

High-frequency PMI data released this week showed that economic conditions in Sub-Saharan Africa deteriorated last month. Specifically, the regional average PMI reading slipped below the 50-point neutral mark to 49.5. This is the second time the gauge has dipped into contractionary territory in the past three months. 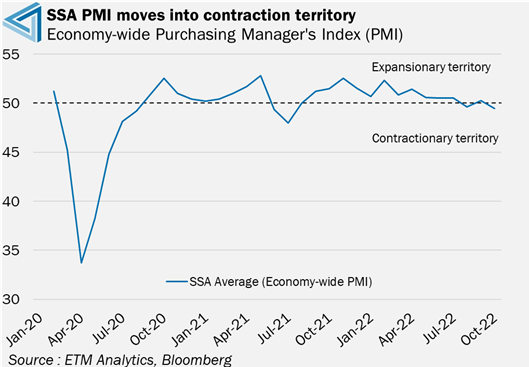 Details from S&P showed that output and new orders in Ghana fell at the quickest pace since the peak of the Covid-19 pandemic. S&P also reported that purchase costs in Ghana continued to rise markedly, despite inflation softening to a three-month low amid sustained cedi weakness.

However, not all was gloomy. Despite nudging lower, Nigeria’s economy-wide PMI remained buoyed well within expansionary territory, coming in at 53.6. This shows an improvement in private-sector activities driven by growth in output and new orders. S&P reported that manufacturing firms registered the strongest increase in output, followed by services, wholesale & retail, and agriculture. As was the case with most countries in the region, price pressures in Nigeria remained fairly robust last month, reflecting the ongoing supply chain backlogs and sustained currency weakness.