SMIC: Potential risks are not likely to impede expansion

In the current era, national development is indispensable to the fast-growing technology sector. In the high-tech domain, intelligent chips facilitate the most critical technologies applied in all walks of life.

As the US Ministry of National Defense announced on December 3, 2020, Shanghai-based semiconductor manufacturer SMIC (HKSE:SMIC) has become the country's second gargantuan high-tech firm to suffer US trade restrictions. Those prevent  SMIC from making products by using American components. Moreover, there was an  internal conflict that happened right after the restrictions were launched. SMIC's CEO, Mengsong Liang, was rumored to be set to unexpectedly resign from the company. Will SMIC successfully handle this situation as it faces major hurdles in both internal and external environments?

After over 20 years of development, SMIC has become a tier-one foundry in China, distinguished by its large industrial size and advanced technology. Moreover, in 2018, it was ranked in the top four contract semiconductor manufacturers globally, occupying up to 6% of the market. It was ranked in the top five by operating income in the global foundry market by the end of 3Q 2020.

From 2018 to the end of 2020, SMIC's capital expenditure increased by around 32.6%; this was connected to SMIC's intentional expansion in 2020. According to the firm's announcement, in March 2020, it purchased LAM, applied materials and electronic equipment from Tokyo Electron limited for USD 0.6 billion, 0.54 billion and 0.55 billion respectively. SMIC has been reportedly stockpiling critical devices since the global tech standoff first emerged. 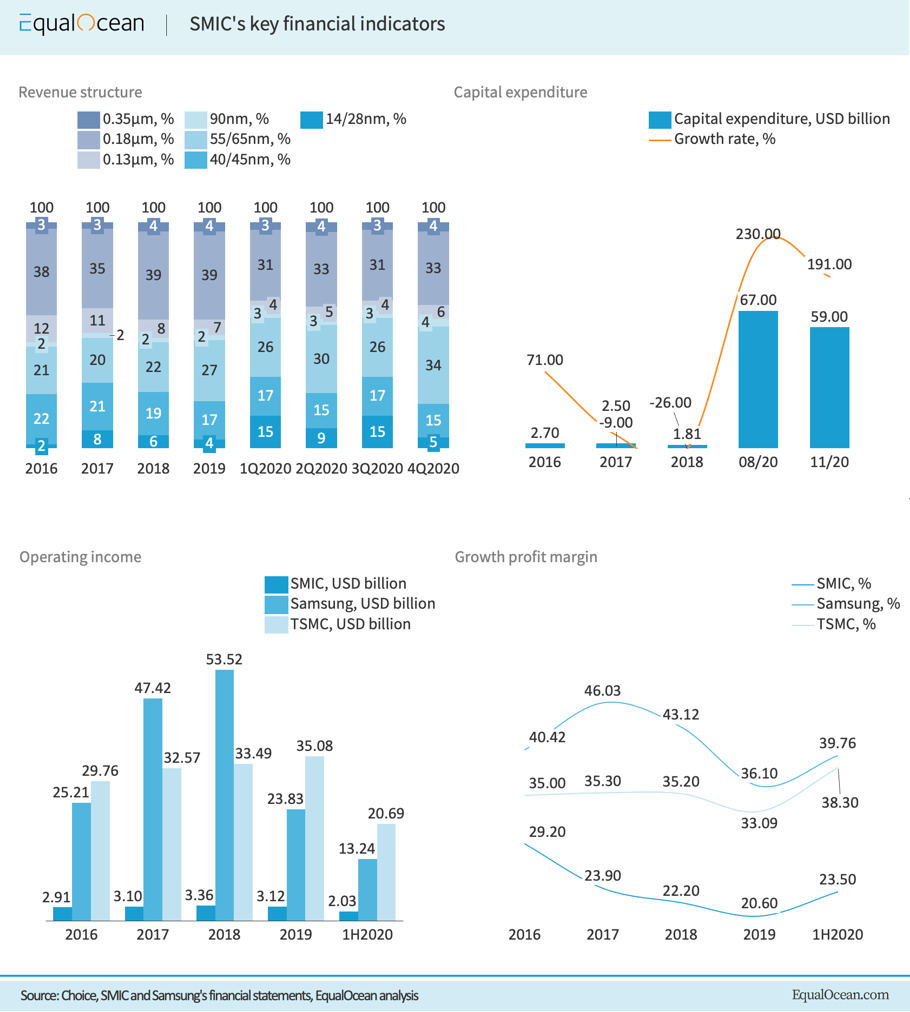 Although SMIC is facing problems these days, it still has at least three development engines. The first factor is government policy. On January 9, 2021, the Ministry of Commerce announced a plan for 'Blocking Foreign Laws and Methods's, aiming at firms outside of the US. Given the negative impact of US blacklisting policy, some firms, including TSMC and Samsung, which utilize American technologies, will not be capable of cooperating with Huawei and SMIC. Under this situation, this new policy will suppress the firms standing by the US. This leads to their limited opportunities to collaborate with Chinese high-tech firms, thereby losing a significant chunk of financial gains. Moreover, China is encouraging in-house product design and manufacturing these days, making more efforts to support firms like SMIC.

The second factor relates to the resolved internal conflict. According to SMIC's recent announcement, on January 10, 2021, Mengsong Liang still remains in the CEO position. Earlier, he has achieved many accomplishments and contributed outstandingly to SMIC. His previous track record was impressive. Prior to SMIC, Mr. Liang worked at TSMC, which he helped to beat IBM in some critical fields. Furthermore, he assisted Samsung in realising the production of 14 nm chips and improved SMIC's core capabilities from 28 nm to 7 nm in 2015.

The ever-expanding domestic downstream is the third positive factor here. Even though the US restriction policy on blocking China's chip technology...