The trade-weighted USD has reversed some of yesterday’s gains this morning as traders lock in their final positions ahead of the ECB’s monetary policy and interest rate decision today. The modest pullback in the USD comes despite the BoJ’s decision to keep its benchmark interest rate unchanged, leaving the wide monetary policy differential between the US and Japan intact. The focus for FX traders now shifts to the ECB rate decision. Overnight EUR volatility surged on Wednesday, suggesting that traders are uncertain whether the ECB will raise rates by 25bps or 50bps. In addition to the ECB rate decision, traders also have an eye on the planned reopening of the Noord Stream 1 pipeline after a 10-day shutdown. Investors should brace themselves for another session of heightened volatility, given all the uncertainty surrounding the ECB rate decision and the reopening of Noord Stream 1 and its impact on global gas prices. In the crypto market, Bitcoin has snapped a multi-session winning streak this morning, trading back below the $23,000 mark.

South Africa: A 50bp rate hike is the base case for the South African Reserve Bank (SARB) MPC meeting. However, there is the risk that we could see a 75bp increase given rising inflation and surging interest rates globally. Yet, given the risk of economic slowdown, both domestically and globally, the potential for the SARB to start walking back its hawkishness through the final months of the year should be considered. Much will depend on the direction of oil prices and the ZAR, with fuel prices already at record highs and the ZAR threatening to weaken further when looking at technical indicators.

Africa: To cushion against elevated food prices and inflation caused by the war in Ukraine, climate change, and the coronavirus pandemic, the Africa Development Bank (AfDB) has approved $1.13bn in funding for 24 African countries. According to the lender, the funding will target 20mn small-holder African farmers with a view to ending reliance on food imports from Russia and Ukraine. The AfDB added that the war has left the continent with a food deficit of at least 30mn tons. If the African Emergency Food Production Facility is successful, African farmers are set to produce about 11mn tons of wheat, 18mn tons of maize, 6mn tons of rice and 2.5mn tons of soybeans over the next two years exceeding imports from Russia and Ukraine.

Ghana: Producer price inflation in Ghana accelerated further in June, coming in at 38% y/y from 33.30% y/y in the month prior. Producer price inflation in Ghana has risen since September 2021, and the June reading was the fastest pace of price growth since October 2014. A breakdown of the data from the Ghanaian Statistical Services report showed that PPI for the manufacturing sub-sector, which constitutes more than two-thirds of the total industry, increased by 7.2ppts to 51.8%, and the mining and quarrying sub-sector increased by 1.6pts over the May rate of 23.9% to record 25.5% in June. The utility subsector meanwhile recorded a 1.2% inflation rate. The persistent increase in supply-side inflation will culminate in higher consumer prices as producers pass some of the costs to consumers. This suggests that inflationary pressures will remain robust in the economy.

Kenya: Deputy President William Ruto has pledged to stay away from debt restructuring if he wins next month's presidential election. According to Ruto, the government will not go "any near debt restructuring," and while he plans to "put the brakes on borrowing, Ruto's government will not stop but "slow it down." Ruto added that Kenya's problem debt is domestic, not international, with KES 550bn spent on repaying local debt annually. Ruto's comments are the opposite of what his main rival intends to do with Raila Odinga vowing to restructure debt to reduce debt-servicing costs and free up resources for development.

Kenya: The International Monetary Fund (IMF) said that the Kenyan government plans to set up  a panel to "oversee the progressive elimination of the fuel subsidy within the first half of the fiscal year 2022/23." The IMF added that should domestic prices remain at June levels, fuel subsidies would grow to around KES119bn, equating to 0.8% of GDP. The Kenyan government has allocated around KES20bn for the subsidies for the fiscal year through June 2023, with the fund equivalent to the amount of money authorities forecast to obtain through a levy meant for stabilizing fuel prices. Going forward, the IMF has indicated that if global oil price increases are larger than can be reasonably accommodated, the government "will proactively engage with fund staff on appropriate policy responses with a view to preserving our overarching objective of fiscal consolidation to reduce debt vulnerabilities." The removal of the subsidy is likely to ease the pressure on Kenya's finances, with National Treasury last month having said that spending on the subsidy was likely to inflate public debt to unsustainable levels and disrupt plans to ease the burden of liabilities.

Selling pressure on the Ghanaian cedi showed no signs of abating yesterday as the currency dropped to its weakest level since Bloomberg started tracking the data series in March 1994. The cedi closed north of GHS 8 per dollar to add to year-to-date losses of over 32%. These losses have seen the currency rank as the worst-performing African currency this year against the USD. 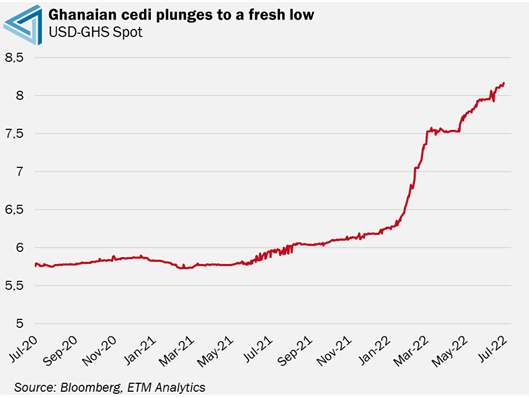 Ghana is looking to sell a 3-year Cedi bond and reopen its 5-year domestic dollar bond. The bookbuild for the two offerings was opened yesterday morning and will close this afternoon. The bookrunners for the bonds have so far suggested that price guidance is 29% for the local currency 3-year bond, while the 2026-dollar bond has an initial price guide of 7.25% set. 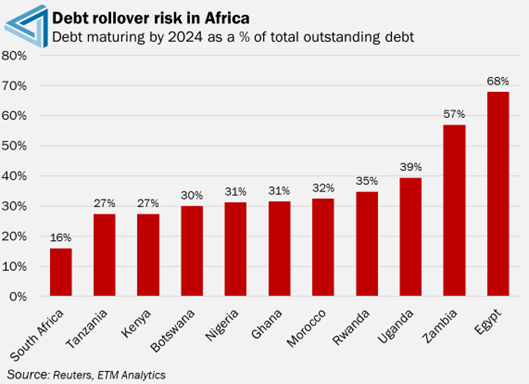 Macroeconomic: Demand slowdown from China will have a large negative impact on Africa

Data from earlier this week showed that China's economic growth slumped to just 0.4% year-on-year in Q2, a result of the widespread damage caused by two months of lockdowns in April and May as a result of a surge in Covid-19. Now, once again, concerns are rising about China potentially putting restrictions in place again as a result of new Covid-19 cases. 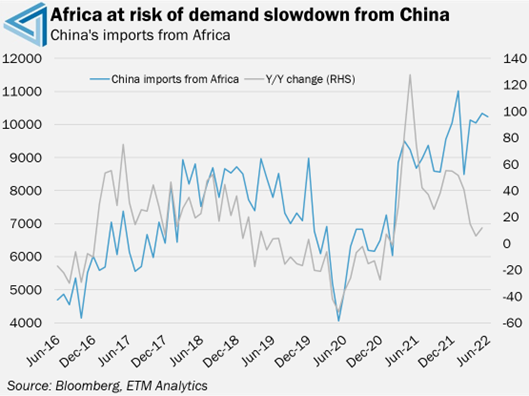