Safaricom's total revenue grew by 18% yoy, primarily driven by M-Pesa's revenue growth of 45%. In turn, this was driven by an increase in transfer revenue – as charging on transactions resumed, growth in volumes outweighed the reduction in transaction fees. EPS grew by 12% to KES0.92.

The result is better than our expectations, and we expect H2 22 to be strong as well. However, we remain conscious of the low base effect from H1 21.

M-Pesa's revenue grew by 45.8% yoy to hit KES52bnin H1 22. This can partly be attributed to the resumption of charges on person-to-person (P2P) and Lipa Na M-Pesa transactions. The activity level has also increased, with M-Pesa recording growth in transaction volume (42%), transaction value (52%), active customers (7%) and transaction velocity (92%) – the number of chargeable transactions per customer.

As a result, M-Pesa now makes up c38% of Safaricom's total services revenue (versus 33% in FY 21), as voice and messaging continue to slow. Note that H1 21 was characterised by a decline in revenue due to the ban on charges for M-Pesa P2P transactions below the KES1,000 threshold.

Strong M-Pesa growth to be sustained

We expect M-Pesa's strong growth to continue, although H2 22 growth might be lower than H1 22 growth given that charging for P2P transfers under KES1,000 resumed in H2 21.

We expect 26% growth in M-Pesa revenue for FY 22, driven by solid growth in P2P, Fuliza and other revenue lines, even with bank-to-wallet and wallet-to-bank transfers remaining free.

Voice revenue grows, but nothing to be excited about

Voice revenue grew by 3%. Management attributes this to improved customer-value management, which drove 0.9% growth in active voice customers. We believe that voice and SMS weakness will persist as OTT services like WhatsApp continue to gain popularity and usage. SMS revenue declined by 18% in H1 22 – a very sharp drop compared with our expectation of a 2.3% fall. Messaging average revenue per user (ARPU) declined by 20.1%, attributable to lower usage levels.

As a result, we have readjusted our FY estimate and expect voice revenue growth to close the year at 1.8% and messaging revenue to decline by 17%. Safaricom intends to defend voice revenue, but room for growth in that segment is limited. 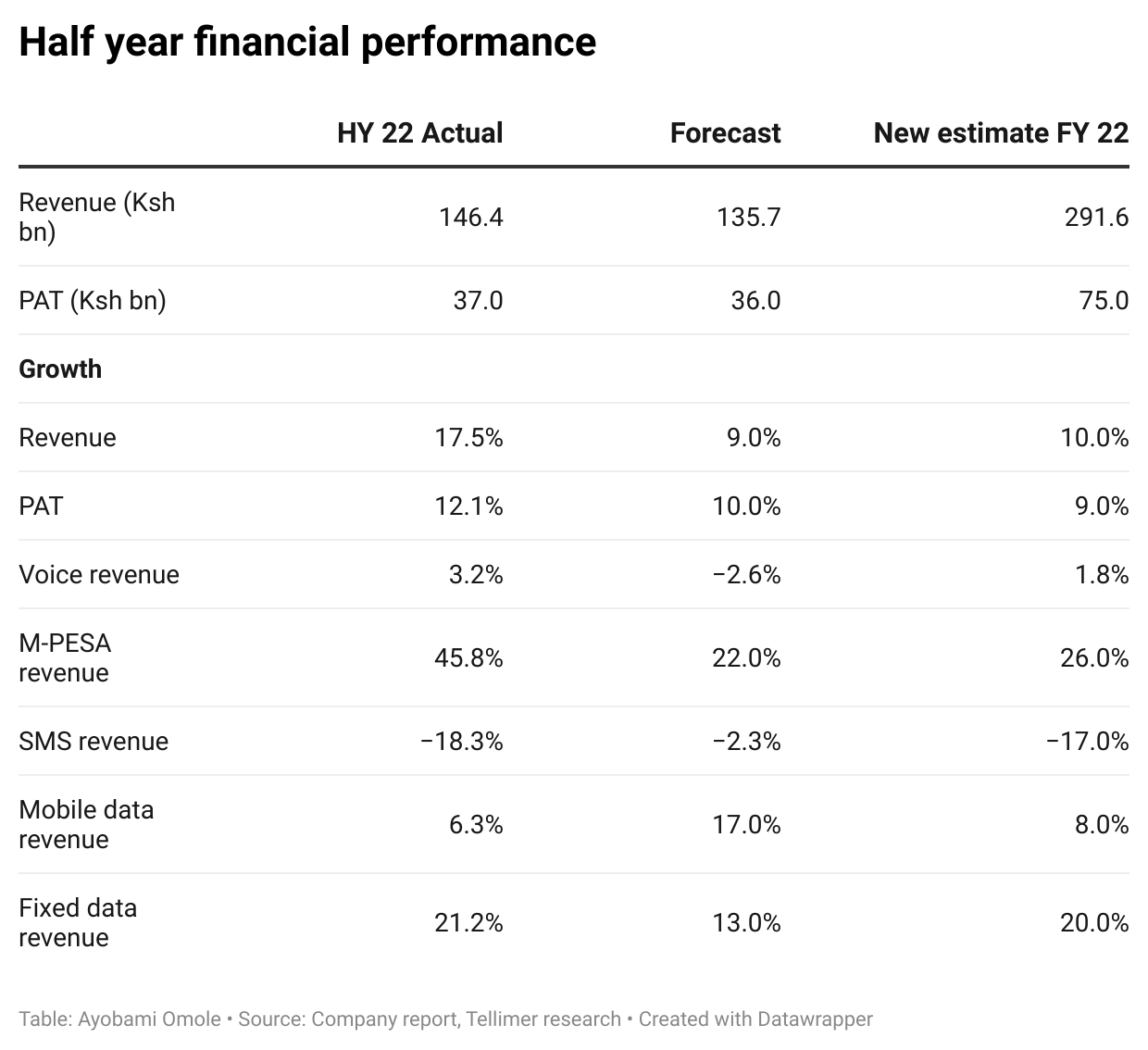 Safaricom launched the M-Pesa 'super-app' in June and already has 3.9mn customers. The super app houses several mini-apps that allow users to access different third-party services, such as apps for booking a bus or paying gas bills. Safaricom also plans to offer wealth and insurance services through the super-app, but the necessary regulatory approvals have not yet been granted.

The super-app model is uncommon in Africa, making it difficult to access how it could evolve for Safaricom – Jumia seems to be the closest comparable. The super-app approach, though, is line with the strategy of African telcos to shift from their traditional service offerings to platform services. Although it is too early to tell how successful this will be for Safaricom, the number of downloads so far looks promising.

Finance costs increased by over 10x on account of new borrowings for the Ethiopian expansion. Safaricom undertook a one-year bridge facility of US$400mn to fund its bid for the Ethiopian telco license, but plans to term out the facility via a long-term debt arrangement.

Capital expenditure grew by just 0.3%, but capex guidance has almost doubled on account of the Ethiopian expansion – it is now at KES70bn-73bn, versus KES40bn previously.

Management has also provided a clearer picture of the capex plan for Ethiopia, putting it at US$1.5bn-2bn over the next five years, much lower than the US$8bn announced previously.

Ethiopia: Remaining hopeful despite the war

Safaricom's management remains optimistic about Ethiopia, although it highlights that safety remains a priority now and has said that it has evacuated some of its staff from Ethiopia. Amid the civil war, management insists that its targeted launch date remains mid-2022, but the anticipated EBITDA breakeven (four years) of the Ethiopian expansion might be extended.

Management has also disclosed that the capex plan for Ethiopia over the next five years is US$1.5bn-2bn. We had previously stated that the initial US$8bn announced by the Ethiopian government after Safaricom won the bid was very ambitious. The new guidance makes the net present value (NPV) more attractive. However, the political risk in Ethiopia, in our opinion, remains the most significant risk and could wipe out the upside potential.

We expect FY 22 net profit to grow by 9%, translating to EPS of KES1.86. Management does not intend to change its dividend policy, so we expect a full-year dividend pay-out of KES1.49.

Adjusting our initial Ethiopian blue-sky valuation for the new capex guidance increases the NPV of the Ethiopian expansion to KES285.9bn (KES7.1 per share from the initial KES4 per share). Incorporating our new revenue and profit expectations and revised expectations for Ethiopia, we review our target price upward by 8% to KES44.34, which still translates to a Hold recommendation.