Several clients have recently asked me versions of this question, so I thought that I should answer it for everyone. Here’s the question: Joe Biden was the centrist candidate from the centrist wing of the Democratic party and has primarily appointed centrist technocrats to run the executive branch, despite having received support from the progressive wing of the party to defeat Trump. If he’s the centrist-in-chief, why does his legislative agenda appear to skew so far to the left?

It’s a good question. After all, not only is Joe Biden the centrist’s centrist, but he was one of the original Democratic deficit hawks, lampooning Reagan in 1984 for deficits that would lead to “an economic and political crisis of extraordinary proportions.” 1984 is a long time ago, and Biden is certainly allowed to change his opinion over 36 years, but that isn’t the main constraint on Biden’s fiscal policy. Rather, US political rules are, and they are about to take an unexpected turn. But first some history…

A (very) brief history of the filibuster

The current Constitution is the US’s second system of government, and the framers of the Constitution learned from the practical challenges faced by the Continental Congress under the Articles of Confederation. One of those lessons was the danger of supermajorities making the legislature hostage to minority groups, and the framers accordingly ensured that almost all parliamentary business could be conducted by a simple majority vote. Alexander Hamilton led this part of the framing, but it was sadly too technical to make it into the musical.

In 1805, Vice President Aaron Burr, immortalised in song for shooting Hamilton the previous year, recommended simplifying the Senate rulebook by removing the motion to force an end to debates. Debates ended amicably in those days, so why have a rule designed to cut them short? Maybe the Senate paid the printers by the word to print the rulebook – who knows. Things went swimmingly until 1837, when a group of Whigs realised that they could now filibuster and used that mechanism to prevent Andrew Jackson’s allies from stopping a motion of censure against him. From that point on, filibusters became an occasional feature of the Senate until 1917, when the Senate introduced a supermajority vote, cloture, to end a filibuster, in order to prevent a group of anti-war Senators preventing the US from arming merchant ships to defend themselves from German submarines.

Originally, a filibuster could only continue as long as the minority could talk and hold the floor. Indeed, Strom Thurmond reportedly used a sauna to dehydrate himself to ensure that his bladder didn’t cut short his record-breaking 24-hour and 18-minute filibuster against the Civil Right Act of 1957, although there are rumours that he also concealed a contraption designed for long car journeys in his trousers as a back-up. The filibustering minority gained a major advantage in 1970, when a two-track system was introduced to allow the Senate to put the filibustered legislation to one side and move on with other business. The threat of a filibuster could now stop business without Thurmondesque exertions. The majority regained some power in 1974, when a process called reconciliation was introduced to allow annual budget bills to avoid a filibuster, and in 1975 when the size of the supermajority required to pass a cloture motion to break a filibuster was reduced from two-thirds to three-fifths. Nevertheless, the last time that the majority controlled two-thirds of the Senate was from 1975-78, when the Democrats held 61 of the 100 seats, and the sharp increase in filibusters shows how power has shifted to the filibustering minority.

Figure 1: Use of filibusters has accelerated rapidly since the two-track system was introduced in 1970 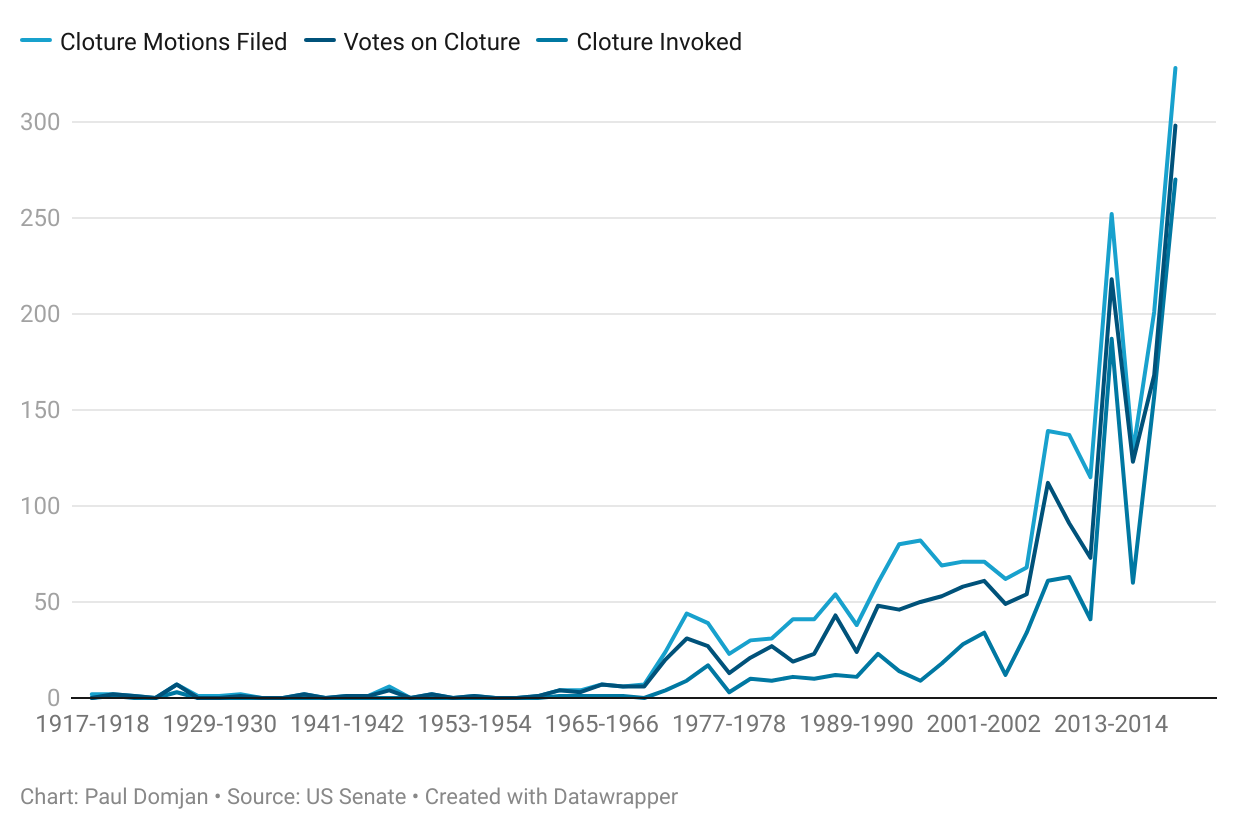 The maths dictates when Biden is a centrist, a progressive or a hawk

Many in the Democratic Party would like to eliminate the filibuster, and Joe Biden, a traditionalist on Senate procedure, has supported a limited reform: eliminating the two-track system and returning to a talking filibuster that would raise the stakes for the minority. Arguably, filibusters would be even harder than in Thurmond’s day if the typical filibuster tactics, like reading cookbooks and lists of names who signed petitions, was broadcasted live. Such a limited reform could potentially pass, but in the meantime, the maths means that Biden is stuck between a rock and two hard places:

This legislative complexity means that Biden, like Trump and Obama before him, will seek to implement policy through executive orders where possible: the one mechanism that lets Biden be his centrist self.

Typically, the majority only get one shot at a budget bill – after all, once the budget is done, it’s done – so only have one chance to use reconciliation. The current Senate has already had two bites at the reconciliation cherry: once to update the 2021 budget left by the previous Congress and once to pass the 2022 budget. That gave them the opportunity to pass the record fiscal stimulus, but they thought that they were done for the year.

On 5 April, the Senate Parliamentarian, one the most important US officials most people have never heard of, made an obscure change in her interpretation of the rules that will drive the Biden administration to the left and give them an opportunity to pass a big infrastructure bill this year. As Senate Parliamentarian, Elizabeth MacDonough is the Senate’s expert on procedural rules. She has now decided that the Democrats can bring a revised budget resolution, including reconciliation language. The Democrats now get another bite of the cherry in 2021, and perhaps more than one bite.

This matters because the Democrats will be lucky to hold their majority in 2022, when one-third of Senate seats are up for election, especially with many Republican-controlled states passing laws to restrict franchise. As such, even when the Democrats are able to use reconciliation for the 2023 budget next year, enough will be cautiously looking to re-election to draw the caucus back to the centre. This year, with re-election relatively distant, is the time for bold action.

It also matters because there are more and more indications that Biden wants to make his presidency transformative, and the scale of spending that he plans makes that a real possibility. Indeed, he is reported to have opened a question to Doris Kearns Goodwin, perhaps the US’s leading presidential historian, with “I’m not FDR, but…” Working towards a transformative presidency will mean stepping away from bipartisan incrementalism, which was a hallmark of Biden’s Senate career but is now increasingly difficult in practice. Accordingly, Democrat strategists talk more often about fashioning policies that will appeal to Republican voters, but that can be passed without any Republican votes.

Biden clearly has two priorities for the new budget bill: corporate tax reform and a US$2.25tn infrastructure and jobs package. The political tea leaves suggest that Manchin’s price, and that of other centrist Democrats like Virginia’s Mark Warner, for supporting the infrastructure and jobs package will be watering down the corporate tax reform. Expect the ticket price of the infrastructure bill to increase as the corporate tax rise from 21% to 28% that was intended to partially pay for it gets watered down to 25%. But why worry? Interest rates are low, and we have MMT (modern monetary theory). The infrastructure package is sure to have a strong green tilt, so maybe it can start to fix the grid. Even in his late 70s, Joe Biden can still hit the rocket boosters.