US Treasury futures are rebounding this morning following Friday’s losses, which were driven by an overshoot for US PPI figures. The beat for PPI has raised concerns that this week’s CPI numbers could also come in higher than expected, which would support the Fed’s view that rates are going to be needed to stay higher for longer. While bond traders still disagree with the Fed and are pricing in sharp rate cuts from next year, options betting on higher yields over the near term are rising ahead of this week’s inflation data and the Fed meeting. Therefore, we should see yields remain elevated over the next few days as the market waits to see what the world’s most influential central bank will do at its final meeting of the year.

Meanwhile, bund and gilt yields also closed notably higher on Friday with the moves mostly driven by the US PPI numbers. Both the ECB and BoE will be meeting this week and we expect that rate hikes of at least 50bp will be announced. Forward guidance is also expected to be hawkish, which should keep global bond markets under pressure, at least for now.

Africa: All eyes will be on the Africa summit in Washington this week where dozens of the continent’s leaders and officials will meet for three days of talks. The United States has lost much of its political capital to the Chinese on the continent and the US will be seeking to address this. Market access will be a key component of the talks given that the African Growth and Opportunity Act expires in 2025. There are murmurs that South Africa could lose its preferential access to the US markets if its trade policies place American exporters at a disadvantage to their developed market counterparts.

Ghana: A report citing a letter seen by Reuters indicates that the Bank of Ghana has set out relief measures for banks that participate in the government's domestic debt exchange in a bid to allay their worries over its potential impact. The relief measures in the BoG's letter include the reduction of the cash reserve requirement ratio to 12% on cedi deposits and the risk-weights for new bonds to be 0% for calculating the capital adequacy ratio and 100% for old bonds. Other measures listed in the central bank letter to banks include reducing the Capital Conservation Buffer from 3% to 0%, which it said would "effectively" cut the CAR from 13% to 10%. Last week Ghana launched a plan to exchange its local bonds for new ones with fresh maturity dates and coupon rates to help restore macroeconomic stability.

Mauritius: Finance Minister Renganaden Padayachy has said that the government is considering offering as much as $1bn of social-impact bonds to help fund plans to increase renewable-power production and transition to greener transport. Padayachy added that a regulatory framework will be put in place by the end of the year to enable the sale of green, blue and social bonds. The bonds will help finance "social aspects of governance, economic development, environmental issues, but also future projects mainly concerning the ambition of the government to be free of coal by 2030", according to the minister. The government is targeting having 60% of its electricity generated by renewable resources.

Uganda: The Energy Ministry, in a statement on Friday, said that Uganda will partner with the private sector in forming a new electricity firm. The government will hold a majority stake in Uganda National Electricity Company under the public-private partnership, and the entity will be responsible for power generation, transmission and distribution in a bid to cut power costs. The Energy Ministry also said that it would not renew South African power firm Eskom's licences to run two hydropower stations when they expire in March next year, as part of plans to bring the electricity sector under government control to reduce costs to consumers.

Tanzania: The Bank of Tanzania, in its November economic review, reported that Tanzania's gold exports fell by 0.7% in the year ended October, mainly due to a decline in world market prices. Specifically, the country's gold exports came to $2.82bn in the 12 months to October, compared with $2.84bn in the prior-year period. Tanzania's gold exports accounted for 39% of the country's total exports of goods in the year ending in October. The decline in gold exports is likely to detract from Tanzania's foreign exchange income, given gold is the main source after surpassing tourism in 2022 due to pandemic travel restrictions.

Forex: Derivative traders betting on a deeper slide in the Egyptian pound

As Egypt awaits final approval for a $3bn loan from the International Monetary Fund, traders are betting on a deeper slide in the Egyptian pound in the months ahead. For context, the 6- and 12-month non-deliverable forwards are pricing for the pound to weaken by around 18% and 25%, respectively. The pricing in of further pound weakness comes ahead of the IMF “restricted meeting” in Egypt this week, with debate growing over whether the lender will be convinced by the pace of the pound’s decline in the spot market since November or whether they may need further evidence of that Egypt has adopted a truly flexible exchange rate system. 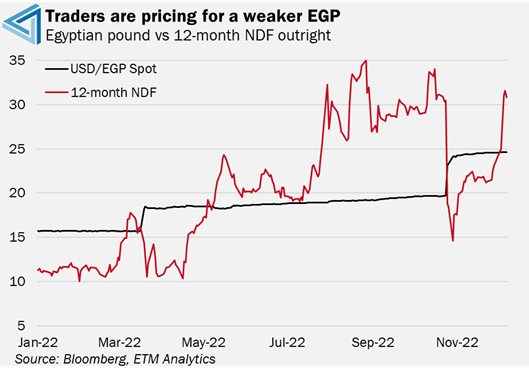 Also adding to bets of further depreciation is the widening gap between the official pound rate and the parallel market rate. As of last week Friday, dealers on the parallel market were selling dollars for around 32 to 33 Egyptian pounds, which compares to an official rate of around 24.6 to the dollar. Despite two major devaluations this year, Egypt continues to face foreign currency shortages, and the widening gap between the official and parallel market rates could result in the central bank allowing the pound to weaken further.

How much more authorities allow the pound to depreciate remains to be seen, given concerns about inflation, which is already at almost a 5-year high, and its socio-economic impact. It is also worth noting that the central bank’s plan to remove a requirement for importers to acquire letters of credit to buy goods abroad is set to put further pressure on the currency. Egypt needs to clear a backlog of requests estimated at over $5bn from importers and companies to access hard currency, a move seen to unleash a wave of further selling in the pound. 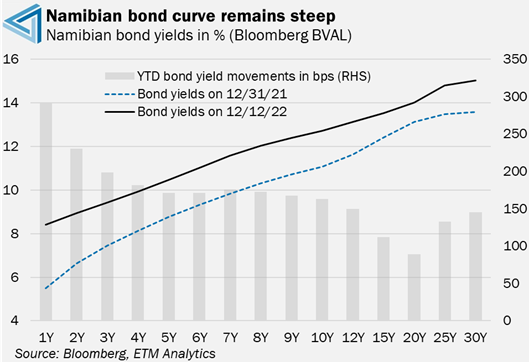 The global ratings agency said that the stable outlook balances its view that the government's fiscal consolidation efforts will limit the rise in government debt and lead to its stabilization over the medium term against significant fiscal risks related to expenditure pressures and an uncertain global economic environment. Fitch estimates that Namibia’s gross debt rose to 68% in the 2021/22 financial year, which is well above the BB median at 55% of GDP.

Notwithstanding the government’s fiscal consolidation efforts, Fitch expects that Namibia’s debt will remain on an upward trajectory as a result of rising debt servicing costs and the country’s rigid fiscal structure. Fitch forecasts Namibia’s debt-to-GDP ratio to reach 73% of GDP by the 2024/25 financial year and stabilize around this level over the medium term. While we have seen the curve bear flatten this year, driven by rising interest rates, the curve remains steep, reflecting Namibia’s fragile fiscal position.

Macroeconomic: Pullback in oil prices should provide relief to inflation in Africa

Oil prices collapsed more than 10% last week as growing concerns over demand are now more than outweighing supply constraints. Brent crude neared $75 per barrel on Friday, and while we are seeing a minor rebound this morning, the bias for the market remains to the downside, given the uncertainty surrounding the global economy for 2023. The supply side of the equation remains tight, with OPEC+ sticking to its output cuts, while Russia has stated that it could cut production further now in response to the price cap imposed by the EU earlier this month.

However, as major central banks continue to hike interest rates and push their economies closer to recession, the outlook for demand is weakening, and the market is shifting into a structural surplus, as evident by timespreads across the future curve. These spreads show higher prices for future-dated contracts, a sign that the market is quite bearish over the near term. 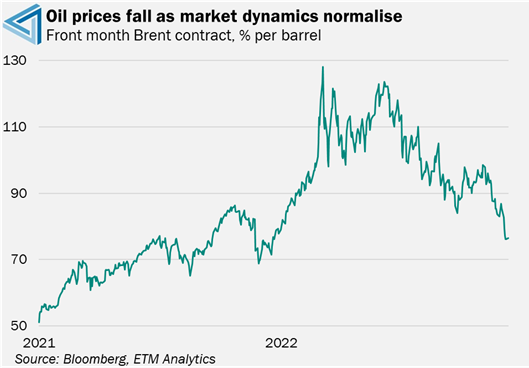 The one piece of the demand puzzle that remains supportive is China, which continues to ease its COVID curbs and reopen its economy. We should see demand for fuel pick up in China over the next few weeks, which should prevent a further collapse in oil prices for now. The risk, of course, is that more curbs are introduced again as infection rates rise amid the reopening. Traders will be keeping a close eye on this as it can swing the market significantly, given the low levels of liquidity into the end of the year.

Lower energy prices are good news for net importers, as high global oil prices have been one of the main drivers of inflation this year. Should the pullback in oil prices be sustained in the months ahead against the backdrop of the high base effects of this year suggests that we would see a meaningful pullback in inflation in 2023.