Reiterate Hold. ShaMaran Petroleum reported Q2 20 financial results showing a serious reduction in EBITDA and cash flows following the oil price shock. On the positive side, high production levels reached in Q1 20 were maintained suggesting that capex cuts may not have an immediate effect on the output. Recently negotiated amendments to the terms of US$190mn 12% bonds lifted liquidity pressure and gave the company additional time to accumulate cash for interest and principal payments. However, at current oil prices, we do not expect ShaMaran to generate sufficient positive free cash flow that could materially improve the company's financial and liquidity position in 2020-2021. Potential positive triggers include the agreement of payment schedule for the overdue receivables from the Kurdistan Regional Government (KRG) or oil prices exceeding US$50/bbl. If Brent stays below US$45, the company may require another debt restructuring within the next 12 months. We reiterate Hold on SCMN 23s indicated at a mid-price of 74 (YTM: 25%).

Weak H1 20 despite a two-fold production growth. Revenues were unchanged at US$27mn as a 40% reduction in average realised oil price was offset by c70% production growth. During H1 20, the Atrush field consistently produced c50,000boepd with ShaMaran's working interest production standing at c13,000boepd. This is where the good news end. In H1 20, EBITDA dropped c60% to US$5mn. Interest, capex and change in working capital put the free cash flow in the red. Cash on hand reduced to US$5mn. The company could not repay US$15mn due in July 2020 and rescheduled the bond amortisation to 5 December 2021. In addition, a US$22mn liquidity guarantee was called upon to help with the July 2020 interest payment. The KRG owes the company US$72mn in total including US$34mn in overdue receivables for November 2019- February 2020 oil sales for which the payment schedule has not been agreed yet. The remaining US$38mn is represented by exploration costs receivables (amounts paid by ShaMaran on behalf of the KRG) for which the company continued to receive payments in H1 20.

Liquidity remains tight. If liquidity reserves are a good measure of resilience to unexpected shocks, ShaMaran's position looks very vulnerable. All the company can count on is US$5mn of cash on the balance sheet, up to US$11.4mn remaining in the debt service retention account (DSRA), which could be used towards the next interest payment due on January 2021. There is no visibility as to when Kurdistan will begin to repay overdue receivables. Historically, the region has treated all the companies equally and will have to simultaneously come up with a solution to pay other oil companies. It was previously mentioned that such payments were unlikely until Brent trades above S$50/bbl. The free cash flow is marginally positive at current oil prices and cannot support liquidity.

Brent above US$50/bbl needed to cover costs and repay debt in 2021. We estimate that ShaMaran's breakeven oil price was at US$46/bbl in H1 20. In H2 20, the company will require an average Brent price of at least US$37/bbl to cover lifting costs, G&A, capex, interest and compensate for the quality discount on Atrush oil. In 2021, the company has a US$15mn bond amortisation, which in the absence of cash reserves, will have to be funded from cash flows. Assuming production, costs, capex and quality discount remain unchanged, ShaMaran could require the price of Brent to be over US$50/bbl to pay the costs and meet its financial commitments in 2021. If oil prices falls short of this level and the KRG does not begin to settle overdue receivables for November 2019-February 2020, ShaMaran may have to restructure again or seek an equity injection. 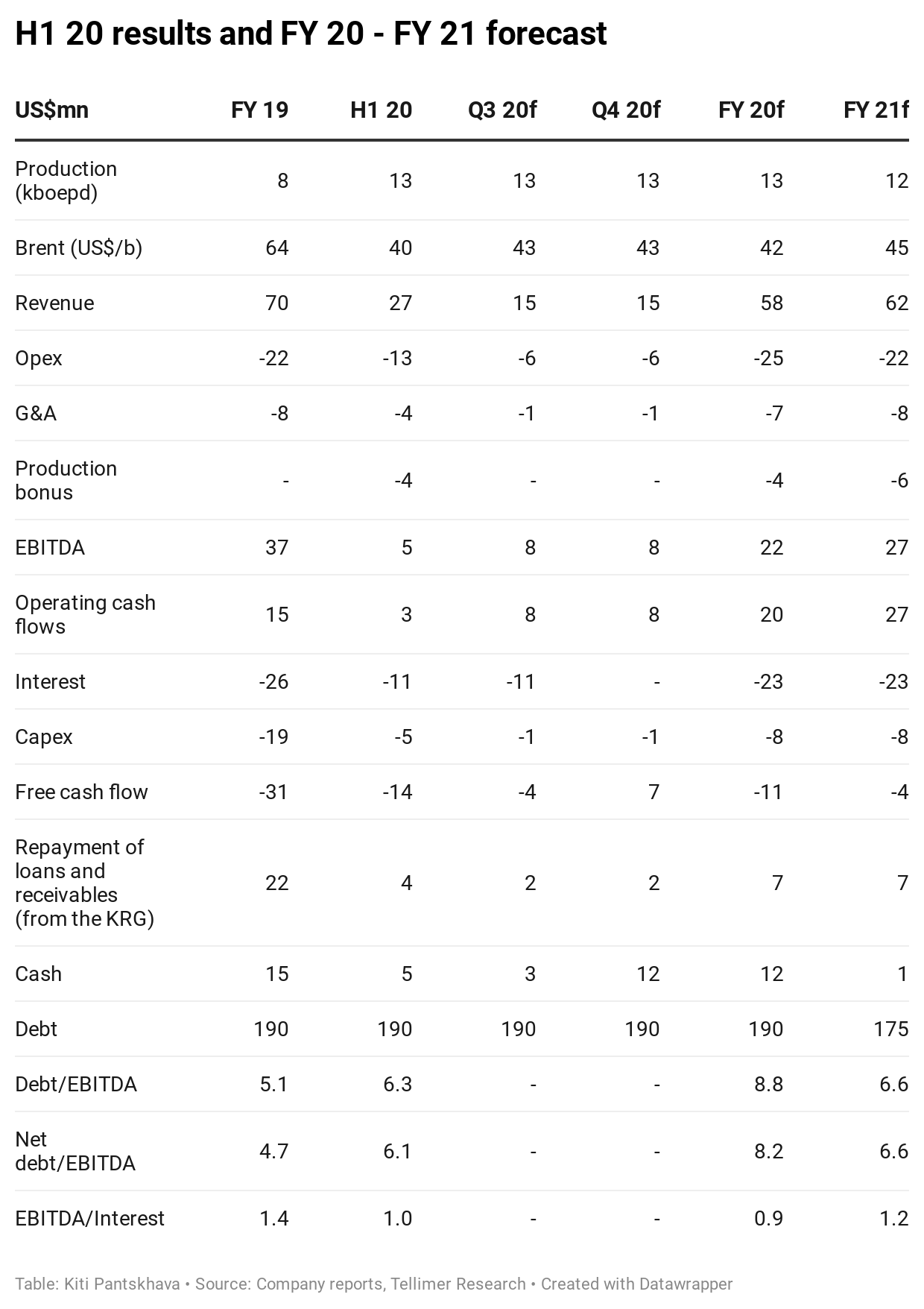