Seychelles: Canary in the coal mine

Seychelles presented an amended 2020 budget yesterday. Sadly, it painted a bleak picture. The global economic crisis caused by the coronavirus pandemic is expected to take a severe toll on this small tourism dependent island nation. For a country that has done everything right over the past decade, to many plaudits (including from ourselves), since emerging from its last default during the global financial crisis, this is an unfortunate turn of events and poses a salutary tale for others that might be in worse shape than Seychelles. Indeed, as the Minister of Finance noted, all the gains over the past 10 years risk being wiped out, gains that have come at some sacrifice too.

Seychelles (rated BB by Fitch) now projects real GDP to fall sharply in 2020, with growth of -10.8% compared with its original projection of +3.5% made in the budget on 31 October. Tourism contributes 25% of the country's GDP and, in a base case scenario, the government is planning on not receiving any visitors for the next four months. Tax revenue is expected to be 25% below its previous projection. As a result, the government is now projecting a fiscal primary deficit (before interest) of -14% of GDP. It had previously projected a primary surplus of 2.5% this year. Public debt is projected to increase to 85.1% of GDP in 2020 compared with its previous projection of 52% for this year, in part due to expected currency depreciation, as well as the fiscal impact.

The government says this means it will approach its creditors to discuss the possible restructuring of its international debt, becoming the second country after Zambia to do so (Ecuador has so far only suspended certain upcoming bond payments, while Argentina's and Lebanon's problems precede this crisis). However, it is not clear from this statement alone what the government's intention is and what debt might be included. Seychelles has one international bond outstanding (SEYCHE 8% 2026), which is now US$101mn in size after amortisation payments (c24% of public external debt); the bond was issued in February 2010 following an exchange of commercial debt (including a bond) on which it defaulted in 2008. And debt service on the bond is low. Annual debt service is cUS$25mn this year (less than 6% of net international reserves), comprising amortisation of US$17mn (amortisation is in two equal semi-annual installments of US$8.4mn) and interest of cUS$7.8mn. The next debt service payment on the bond is in July. Multilaterals account for 40% of public external debt and bilaterals 25% (Table 1). Meanwhile, Seychelles may look to approach the IMF for emergency financing and other multilateral agencies and regional development banks for budget support loans. It may also qualify for a payout under a World Bank catastrophic CCL.

Indeed, history looks to be repeating itself as Seychelles was the first country we think to default on its foreign bonds during the GFC, although its economic situation then was much worse than it is now; public debt was 144% of GDP in 2007, it had a severely overvalued fixed exchange rate and, by the time of default, just 14 days of reserves. Before this crisis, public debt was 53% of GDP (December 2019) and reserves (net basis) were US$438mn as of January 2020 (2.7 months of imports). Seychelles ran a primary surplus, under successive IMF programmes, averaging 5% of GDP over the 10 years to 2019 (reaching over 6% initially), one of the highest in the world outside oil exporting countries.

Seychelles's intended approach to creditors comes at a time when various debt relief initiatives are flying around. The IMF/WB proposal for bilateral creditors to provide a debt standstill to some of the world's poorest countries is one such initiative. However, Seychelles is not eligible for relief under this initiative (Seychelles is not an IDA-eligible country). Another one is the African proposal for a standstill on eurobond payments (for two years) for all African sovereign issuers, which goes further than the IMF/WB one in that:

Still, market participants would want to ensure that decisions on the bonds are not made unilaterally, instead following established principles, assessed on a case-by-case basis, and that it is part of a coordinated response with the official sector. This is particularly relevant to Seychelles, given 65% of its foreign debt is owed to the official sector.

Implications for the bond

We assign a Hold to the bond (we have had a Buy recommendation in the past, impressed by the country's post-GFC recovery and the authorities' strong ownership of, and commitment to, sound policies and its reform agenda, but have not kept the name under regular review). SEYCHE is indicated at around the high 70s level today (mid price basis), down from around mid-90s/par until recently (Figure 1). Indeed, the price had displayed a fair bit of resilience during the crisis so far, with yields as low as 6.1% earlier this year. However, it is not clear how much trading there has been (it is a small, illiquid and tightly held name).

There is downside risk from any restructuring process (including risk of maturity extension or haircuts), but it might be that a restructuring just leads to a temporary payment standstill on the bonds, or the bonds are excluded entirely. It is difficult to know for sure until the government reveals more details of its plans. Moreover, investors may take some comfort from the fact that the bonds have a partial interest guarantee from the AFDB subject to a maximum amount of US$10mn, which now covers just over one year's worth of interest (two coupons). However, it is not clear to us what happens to principal amortisation, and how this is treated or ranked in any restructuring, if the guarantee is called.

Implications for other countries

Seychelles' experience is a worrying sign for others. We might expect a similar picture to emerge in other small open countries and small island developing states (SIDS), or those that are popular tourist destinations, or others that are dependent on remittances or global trade (Figure 2). Among those tourist-dependent economies with foreign bonds, this might include Pacific Islands, such as Fiji and Maldives, and the Caribbean, including Belize, Grenada, the Dominican Republic and Jamaica, although both these latter two countries are bigger economies, with bigger domestic markets and more diversified economic structures which may help them better to absorb this shock. Still, a collapse in tourism will have a pronounced impact on these markets. Moreover, those countries that come into this crisis in a weaker position than Seychelles - for example, with higher debt burdens, weaker fiscal commitment, large gross external financing needs, low reserves and poor policy track records - will be especially vulnerable.

Furthermore, another example of the unexpected toll this crisis is having on previously robust economies is provided by Rwanda, another country that has received plaudits from investors for its sound economic management, reform agenda and strong economic growth. The IMF has recently approved emergency financing for Rwanda under its Rapid Credit Facility (RCF). Macroeconomic projections in the accompanying IMF statement show an expected fall in its exports of goods and services (as a share of GDP) this year of nearly half (from 21.3% of GDP in 2019 to 13.6% in 2020) with a resulting near doubling of its current account deficit (including grants) to 16% of GDP and sharp fall in reserves (by around one-third, with reserve coverage falling from 5.4 months of imports to a forecast 2.9 months). Real GDP growth is expected to slow from 10.1% in 2019 to 5.1% in 2020. Is this another foretaste of what we will see elsewhere? 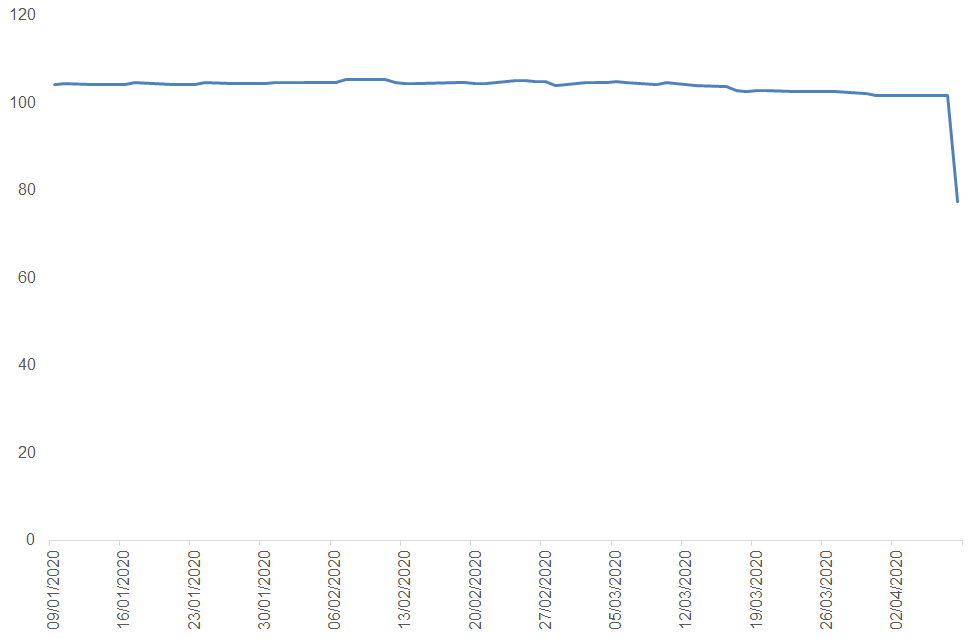 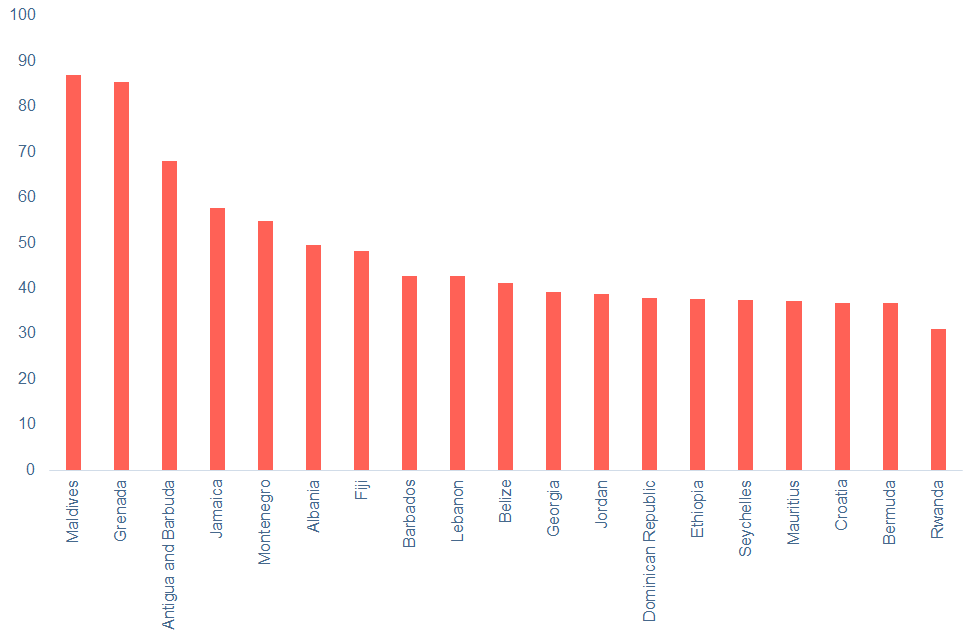