Serbia's central government budget will target a deficit of RSD 264bn (3.3% of GDP) in 2023 against a revised budget target of RSD 279.1bn (3.9% of GDP) in 2022. The 2023 draft budget foresees funds for hike of public sector wages, pensions and minimum wage, implementation of major infrastructure projects as well as funds to mitigate the energy crisis caused by the war in Ukraine. The most important tax policy measures in 2023 are the increase of non-taxable income from RSD 19,300 to RSD 21,712 and the cut of employer-paid contribution for pension and disability insurance by 1pp (from 25% to 24%). The government has calculated that the revenue loss based on measures at general government level will be around RSD 41bn. The direct loss of revenues for the central government would be RSD 1.8bn, of local governments - RSD 5.5bn and the remaining RSD 33.8bn - for the pension and disability insurance fund. Next year, the government will extend the reduction of excise duties on petroleum products and will not proceed to regular indexation of other excise taxes. A lower budget deficit should help bring down general government debt to 56.1% of GDP in 2023, compared to 56.9% of GDP in 2022.

The 2023 budget is drafted under the assumption that real GDP will rise by 2.5%, the same as in 2022. The government revised down 2023 GDP growth projection by 1.5pps compared to the initial projections in the Fiscal Strategy for 2023 with projections for 2024 and 2025. The revision is due to the materialisation of external risks caused by the war in Ukraine. Domestic demand will be the main growth driver in 2023, while net export will have almost neutral contribution. On the production side, services should be the main growth driver. The IMF expects the economy to grow by 2.3% in 2023.

The government projects that CPI inflation will decelerate to 11.1% in 2023 from 11.6% in 2022, staying well above the upper end of the NBS' target tolerance band (3%+/-1.5pps). Inflation will continue to be under the influence of prices of global primary commodities, energy and of higher imported inflation. Inflation should return within the band in H2 2024.

The CA deficit should fall to 8.5% of GDP next year from 9.0% of GDP in 2022, mainly as a result of improved terms of trade due to the slower growth of import than export prices. The government expects stable FDI inflows in 2023. 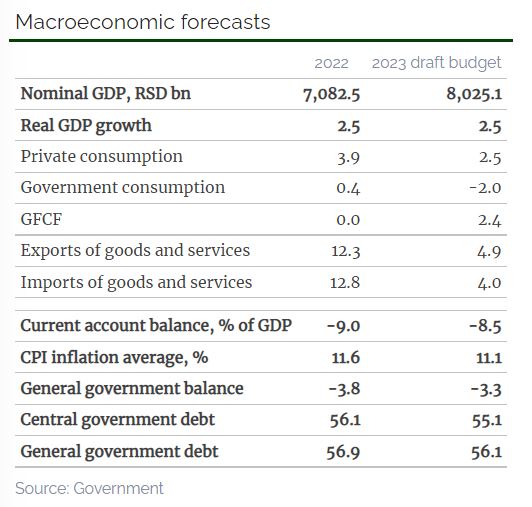 Serbia to rely on borrowing from IFIs, eurobonds

The draft budget sets total financing needs at a maximum of RSD 1.246.7bn in 2023, up from RSD 756.6bn in the revised 2022 budget. The funds needed for financing of budget deficit and debt repayment are RSD 919.1bn. If Serbia achieved the maximum borrowing set in the budget, the remainder of RSD 327.6bn could be used for pre-financing of liabilities due in the following year.

Next year, Serbia will prefer external borrowing. Borrowing from IFIs and foreign governments is raised to RSD 650bn in 2023 from RSD 450bn in 2022. The country also plans to sell Eurobonds for up to RSD 360bn. This year, Serbia abstained from tapping international financing markets. Borrowing from the domestic market is lowered to RSD 230bn in 2023 from RSD 300bn in the revised 2022 budget. The draft budget does not provide a more detailed breakdown of the funds it expects to receive from IFIs, including from the IMF. We remind that the government has reached an agreement with the IMF on a EUR 2.4bn stand-by arrangement that is pending the approval of the IMF Executive Board. Serbia intends to use the financing that will become available during the first part of the SBA and to treat the remaining access as precautionary. 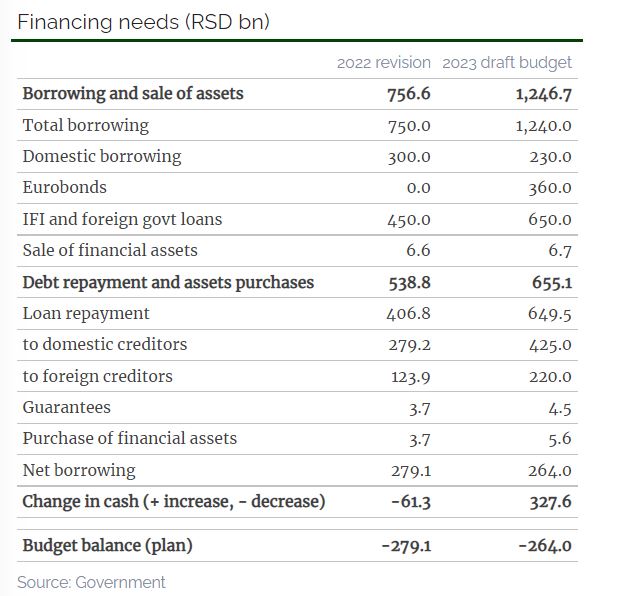 Budget revenues are planned at RSD 1,843.4bn, up by RSD 133.9bn (7.8% y/y). Tax revenues should rise by 6.9% y/y to RSD 1,592.8, whereas non-tax revenues would be basically unchanged. The government said it has projected revenues cautiously, bearing in mind growing uncertainty related to the war in Ukraine. In view of maintaining people's purchasing power, the government has decided to increase the minimum wage by 14.3%, hike public sector wages by 12.5%, while the pay raise in the army will be 25%. It also decided to continue relieving the burden on wages. As of 2023, the government also plans to change the way of indexing pensions by taking into consideration their share into GDP. All these measures should instigate personal consumption and boost tax revenues collected based on this basis. The government intends to extend the reduction of excise taxes on petroleum products into 2023 in order to curb the negative impact on global oil prices. The 2023 draft budget foresees higher revenues from grants because of an expected aid from the EU in the fight against the energy crisis.

Expenditures are set at RSD 2,107.4bn, up by RSD 118.8bn or 6.0% y/y. The increase mainly reflects higher current expenditures following the hike of wages and pensions. Expenditure growth will be underpinned also by higher interest costs and spending on subsidies, the bulk of which will be used for procurement of basic mining machinery for surface mines of the power utility EPS, subsidies for energy vulnerable customers, business consolidation of Resavica mines and mitigating the impact of the energy crisis. Other current expenditures are nearly halved in the draft budget, meaning that next year the government intends to stop providing one-off assistance to some groups of the population.

Capital expenditures are planned are planned at RSD 427.2bn in 2023, similar to 2022 level. The most significant funds are earmarked for infrastructure projects such as fast road Novi Sad-Ruma; Hungarian-Serbian railway project; construction of Belgrade ring road on E-70/E-75 highway; bridge over Sava River near Ostruznica-Bubanj Potok; E-763 highway section Preljina-Pozega; section Pojate-Preljina on E-761 highway; Ruma-Sabac-Loznica high-speed road. The budget foresees as well funds for a project of construction of communal (sewage) infrastructure and infrastructure for municipal solid waste disposal; for equipping the army and police, construction of broadband communication infrastructure in rural areas and others. Costs of activated guarantees should fall by 23.5% y/y. The bulk of the funds is foreseen to overcome the energy crisis, credit support to companies in the process of privatisation, water supply and wastewater treatment program in medium-sized municipalities in Serbia.

The revised medium-term fiscal framework foresees gradual reduction of the general government budget deficit to 1.4% of GDP until 2025 and decline of the debt-to-GDP ratio to 54% of GDP. In June, the strategy projected that the fiscal deficit would be brought down to 0.5% of GDP until 2025, while public debt would decline to 50.7% of GDP. The government changed the fiscal framework due to the negative impact of the global prices amid the war in Ukraine. Funds earmarked to mitigate this impact are the reason for the increase of expenditures and deficit.

The framework envisages a moderate abandonment of the expansive fiscal policy that was present during the COVID pandemic and reallocation of significant part of the budgetary funds for mitigation of the energy crisis. In the coming period, fiscal policy will be focused on further reduction of the total tax burden on labour. On the expenditure side, infrastructure and capital projects, as well as pension and wages policies will have a priority.

A new budget system law should be adopted by the end of this year that will define a new set of fiscal rules that will prescribe the level of the general government deficit depending on the level of the general government debt level. They should be applied from 2025 since the deficit levels in 2023 and 2024 are at higher level due to the energy crisis and external factors. The revised medium-strategy contains the proposal for the fiscal rules: 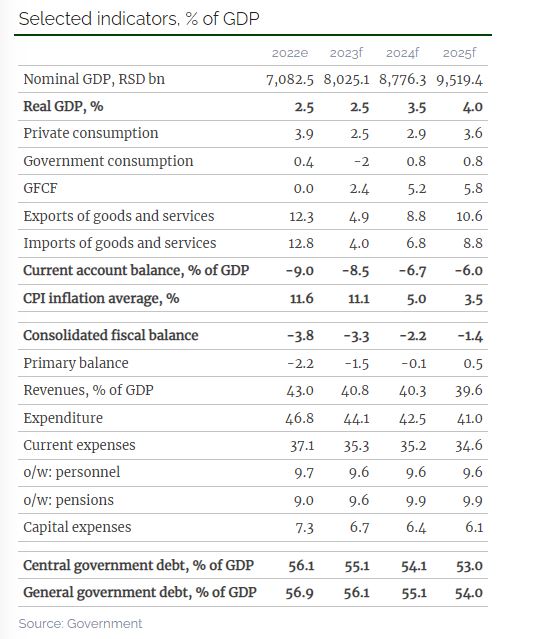 The Public Debt Management Strategy provides projections for interests and principals repayment until 2025, but does not provide a breakdown between domestic and external debt service. The figures have been revised since June and are as follows: 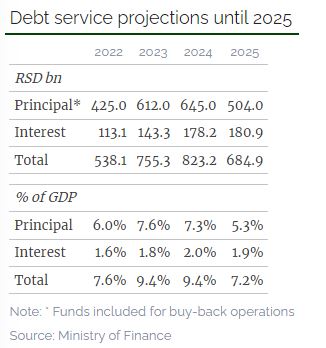 Budget revenues and expenditures in 2023 seem to be credibly planned although risks to achievement of budget target are significant because of the persisting uncertainty related to the war in Ukraine. Macroeconomic projections could be changed depending on how the energy crisis evolves. The reduction of the budget deficit in 2023 will mainly depend on solving the problems of the public energy companies that required significant resources from the budget in 2022. On the positive side, Serbia would benefit from the expertise of the IMF after the new, EUR 2.4bn stand-by arrangement with the Fund is approved by the end of the year. The arrangement should help the government address external and fiscal financing needs, but also help it deal with the problems in the energy sector. The government will have to stick to the agreed targets with the IMF if it wants to get financing. Another positive thing towards strengthening the financial consolidation is the upcoming adoption of the new fiscal rules on debt and expenditures on pensions and wages. On the domestic front, despite heightened tension over Kosovo we do not see for now a risk of a full-blown conflict. We think that the EU and the US will do their best to avoid such a scenario because it could destabilize the Balkans.