Sea Ltd (SE US) has won a digital banking license in Singapore. This comes on the heels of the prospective Grab-Gojek merger.

But these developments will magnify Sea's vulnerabilities. Sea will be one of the four digital banks in Singapore. The digital banks will be allowed to take deposits and provide banking to retail and corporate customers.

Singapore’s banking is saturated and SE US may have to invest US$1.3bn in three years. Established banks such as DBS and Standard Chartered are also making a foray into digital banking. The competition will be intense and regulatory costs could be higher than expected.

SE US’s cash burn could worsen. SE US is projected to be CFO negative for the next two years. It has already racked up US$1.2bn in EBITDA losses in the past five years.

The Gojek-Grab merger will transform the ASEAN tech space. The merged platform will be a dominant player along the lines of Alibaba in China and Amazon in the US.

The prospective merger is a body blow for Sea Ltd. Sea is a gaming company that intends to become an e-commerce giant. However, at this stage in its development, the gaming business is subsidising the e-commerce platform. ShopeePay, Sea's payment platform, has one-tenth of the market share of the combined share of GoPay (Gojek’s payment arm)  and Ovo (Grab’s payment arm in Indonesia). This means that Sea’s foray into payments will face serious competitive pressure. The merged entity would have better scale economics than Sea, as well as a larger platform.

SE US will no longer be the only game in town for ASEAN e-commerce listings. We think its performance hitherto has partly been a consequence of its 'only game in town' status – its extravagant valuation can be attributed to its scarcity value.

Its gaming business is a one-trick pony that is dependent on the Free Fire game. Gamers can be fickle and a change in gaming trends could wipe out the returns from the SE US's sole cashflow positive segment.

SE US is trading at an untenable premium to the EM e-commerce peer group. At 23x P/Sales, it is three times the peer group average. 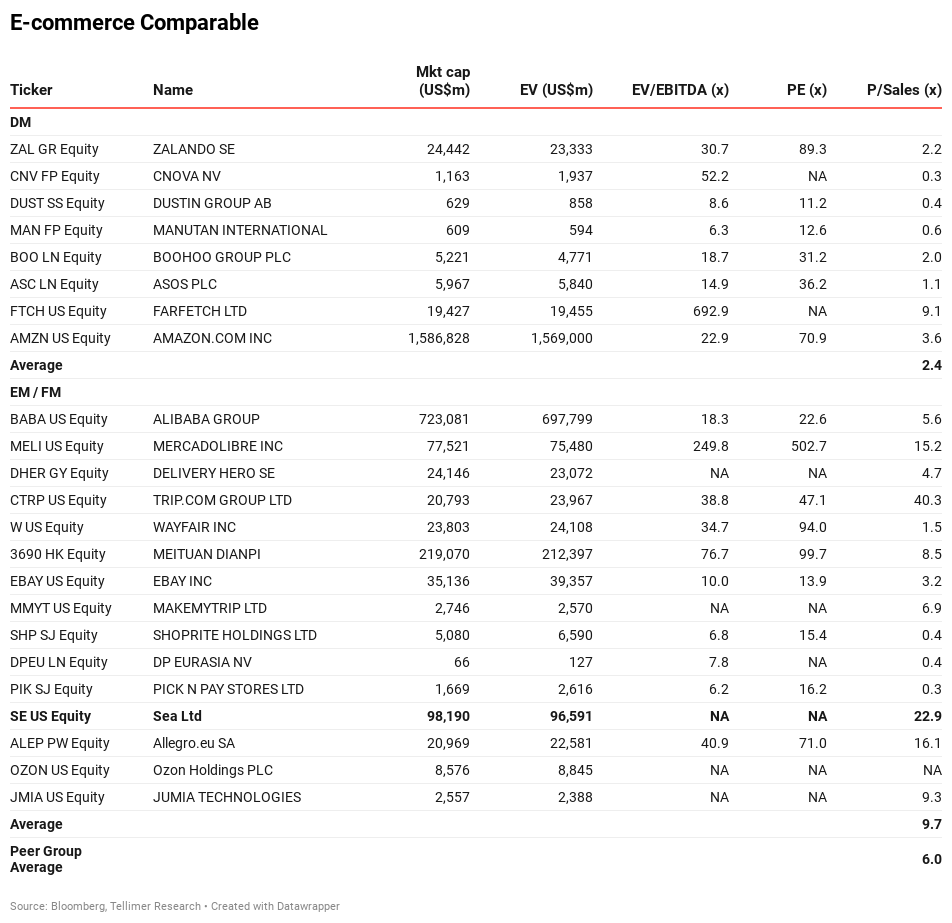